13 Days, 7 Wonders, And One Case Of Skin Cancer

When you survive three near-death experiences, the universe might be trying to tell you something: go out and see the world.
cancerskin cancer 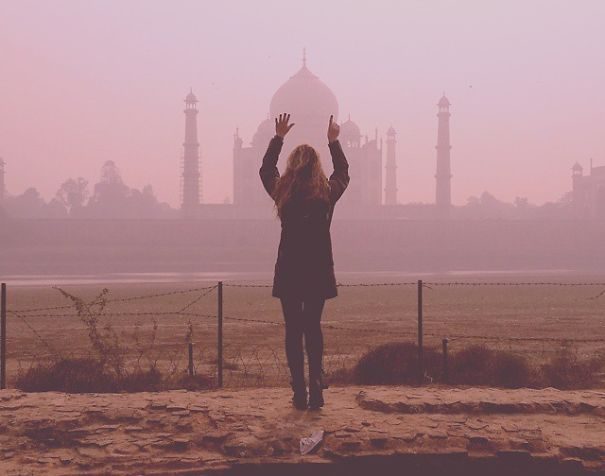 When you survive three near-death experiences, the universe might be trying to tell you something: go out and see the world.

On a Monday, while climbing the treacherous Nose route on Yosemite Valley’s El Capitan, she fell 50 feet down the mountain. She was severely bruised, but somehow broke no bones. A week later, while riding her Vespa to work, Sullivan was hit by a car and wound up in the emergency room. Then, that Thursday, during a routine checkup, Sullivan learned that what she’d thought was a “forehead pimple gone awry” was actually skin cancer. Surgery, luckily, cured it.

“It was hilarious in a not-hilarious way,” Sullivan says. “I asked myself how much more bad luck I could possibly have, but I also realized the outcome of all three instances was the best case scenario: I survived.”

After this trifecta of bad luck, she could’ve taken her parent’s advice to “go live in a giant protective bubble.” Instead, she took it as “a reminder to live more now.” Two weeks later, she realized her lifelong dream of making a film about traveling the globe.

In 13 days, Sullivan visited the New Seven Wonders of the World. On a budget of a little over $6,000 each, the pair flew to the Great Wall of China, Peru’s Machu Picchu, Rome’s Colosseum, Brazil’s Cristo Redentor, Mexico’s Chichen Itza, India’s Taj Mahal, and Jordan’s Petra. Along with her trip report and photographs, the film Sullivan made about her journey went viral.

Finding renewed appreciation for life after a near-death experience (or three) is a classic narrative. The underreported aspect of such awakening stories is how hard it can be to maintain this new perspective after returning to a “normal” daily routine, relatively speaking, and in the face of even more misfortune down the line. “Experiences like this will have an effect on you even a year later,” Sullivan says. “It’s more about what comes after the ‘happily ever after.’”

How has the renewed perspective Sullivan gained during her travels to the Seven Wonders held up in the last year? “This past January was probably one of the hardest months of my life,” Sullivan says, “but the circumstances were [more emotional] and harder to grasp than ‘Oh, I fell; I got hit by a car.’ You never understand why bad things keep happening to you, but I’ve learned to look at the bigger picture and realize that it’s the failures, losses, and disappointments that define your greatest future successes. Sometimes it takes falling on your ass again and realizing the good that can come out of that. Throughout my whole life, I’ve had my greatest accomplishments a few months after going through the biggest tragedies.” In her twenties, Sullivan says, she’d put aside dreams of becoming a filmmaker to work a secure job as a commercial producer–with health insurance, thankfully–but her month as a modern-day job encouraged her to change her path.

“Through tragedy, you kind of experience this void,” Sullivan says. “Usually, it’s a void you don’t understand. It sucks at the time. But after the first round of craziness last year, that bad luck opened up this space, this void for me to fill with something else.”

For her, that something else continues to be travel, adventure, and filmmaking. In April, Sullivan took another trip, this time to Nepal, a country still reeling from an earthquake that killed more than 8,000 people a year ago. During her solo month there, she participated in Holi, a festival of colors that signifies the triumph of good over evil, and climbed Mount Everest, filming all the while, with minimal gear. She’s currently working on making two videos from this footage–the first, a short documentary about the life of the modern-day Nepalese sherpa; the second, a 2-minute montage-style piece covering the entire adventure.

“Apart from flying in a Boeing 787,” she recently captioned a photograph of herself at 18,514 feet, standing at the top of Kala Patthar, “this is officially the highest I have ever been.”

Jennifer Furner
Do you know someone else who would enjoy this story?
You might also like...
Fighting Cancer In A Country Without A Word For It
Kellie M. Walsh
My Airless Nation

Chair Skills
Don’t miss one more amazing story.
Every week, we’ll send a few of our favorite stories to inspire you.
Send this to a friend
Scroll to top