Mohammed Sayed created Wheelchair Man to show kids with disabilities that they are capable of anything. If anything, Sayed's even more of a superhero than his creation.
paraplegiaquadriplegiaspinal cord injury 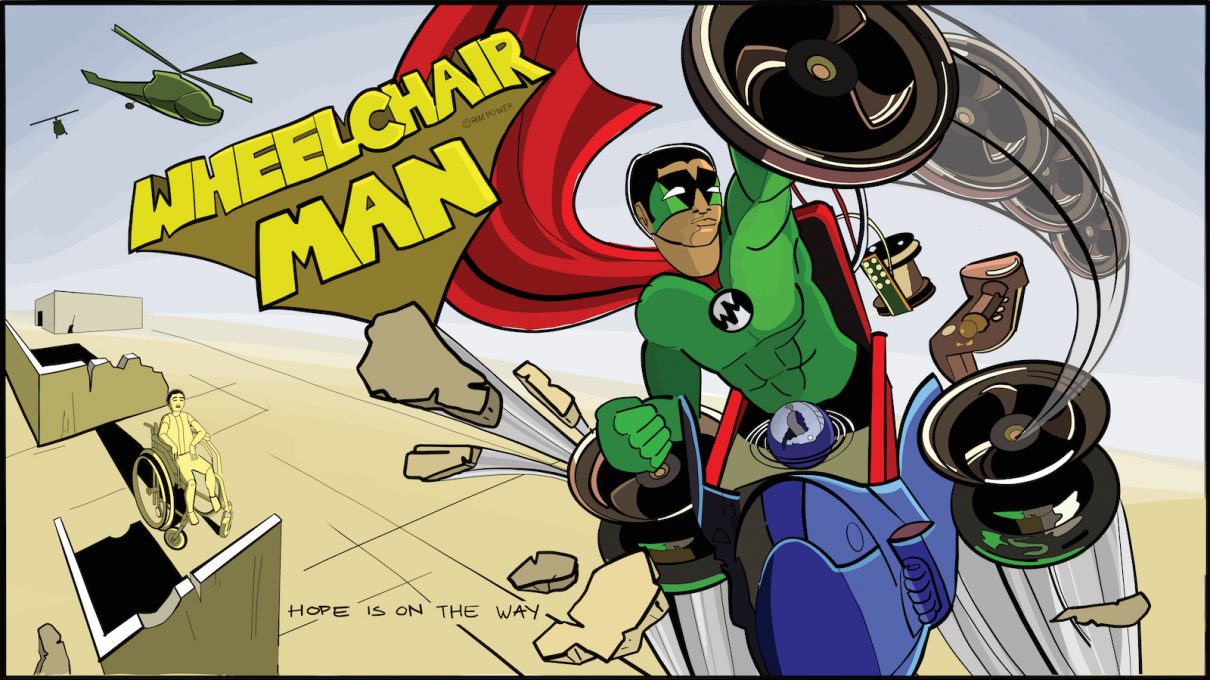 Around fifteen years ago, Mohammed Sayed was injured in a bomb attack on his home in northern Afghanistan. He was five. Sayed, who goes by Mo, had his spinal cord injured in the attack, which permanently paralyzed his legs. Two weeks earlier, his mother had died of cancer. His father brought him to a hospital, left him, and never returned.

The hospital, run by an Italian NGO, allowed Sayed to live there. Around age nine he began finding ways to make money for himself. A natural entrepreneur, he taught himself how to fix cell phones, which had just started becoming popular in Afghanistan. He became the go-to cell phone repairman in the hospital. “I was probably the richest Afghan in a wheelchair making money off cell phones,” he quips. He had also taught himself English listening to BBC radio programs and chatting with hospital staff. At a school he attended nearby he rapidly rose to the top of his class. 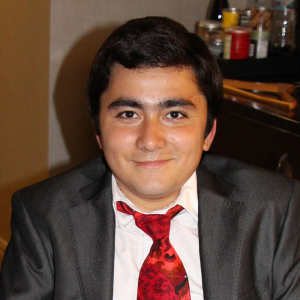 Mohammed Sayed lost the use of his legs after a bomb attack in Afghanistan.

When Sayed was twelve, he was adopted by an American nurse he had met at the hospital. Together they moved to Watertown, Massachusetts, where he began attending public middle school. His natural ingenuity was nurtured in adolescence while attending NuVu, a private high school in Cambridge that encourages invention. Soon he was inventing adaptive products for wheelchair users. Some of them he showed to President Obama at the 2015 White House Science Fair (the move to America, doctors tell him today, also saved his life: had he not had the spine-correcting surgeries he did once he arrived, he would likely not have survived past eighteen).

For the past two years, though, Sayed has focused his energy into a different kind of invention: a comic book about a disabled superhero called Wheelchair Man. Though he had no experience in storytelling or illustration (a family friend draws it), the comic has taken off, garnering coverage from news agencies around the world. The U.S. State Department has even taken an interest, going into collaboration with Sayed. The comic, which he intends as a series of various disabled superheroes from the developing world, is a product of RimPower, a disabled empowerment non-profit which Sayed, now 21, founded. The point of Wheelchair Man, he says, is not entertainment but empowerment. We reached out to hear more.

On your own as a boy you were incredibly self-reliant, teaching yourself English and running a small business. How, though, did you learn to live with your disability?

I never let me being in a wheelchair define who I was. I don’t know how that happened. I was just hopeful. I believed I could accomplish things. What makes me different from a lot of other people is that I never really cared about how others perceived me. I had learned from a young age to do what I like and to believe in myself. I always thought I was just as capable as anybody else. The only thing I didn’t have was my legs.

I had learned from a young age to do what I like and to believe in myself. I always thought I was just as capable as anybody else. The only thing I didn’t have was my legs.

What did your classmates in Afghanistan think of your disability?

In the beginning of my schooling, I had a friend who had lost an eye and a leg through an explosion. We started school together and we used to get bullied. But if you are number one in your class in Afghanistan it is basically like you are the teacher. In fact, when there was no teacher, instead of hiring a substitute they had the student who was number one fill in. There were 62 students in my class. Once I started moving up the ladder kids started respecting me. They began to judge me by my knowledge instead of my appearance.

How did the idea for Wheelchair Man enter your mind?

I had long realized there were all these other superheroes but nothing that involved wheelchair users or disability. Then one day I went to Comic-Con in Boston. Lot of people go. Attendants dress up as their favorite superhero. I saw nothing that represented people with disability. I decided then that having a disabled superhero would be a great way of mentally empowering children with disability. 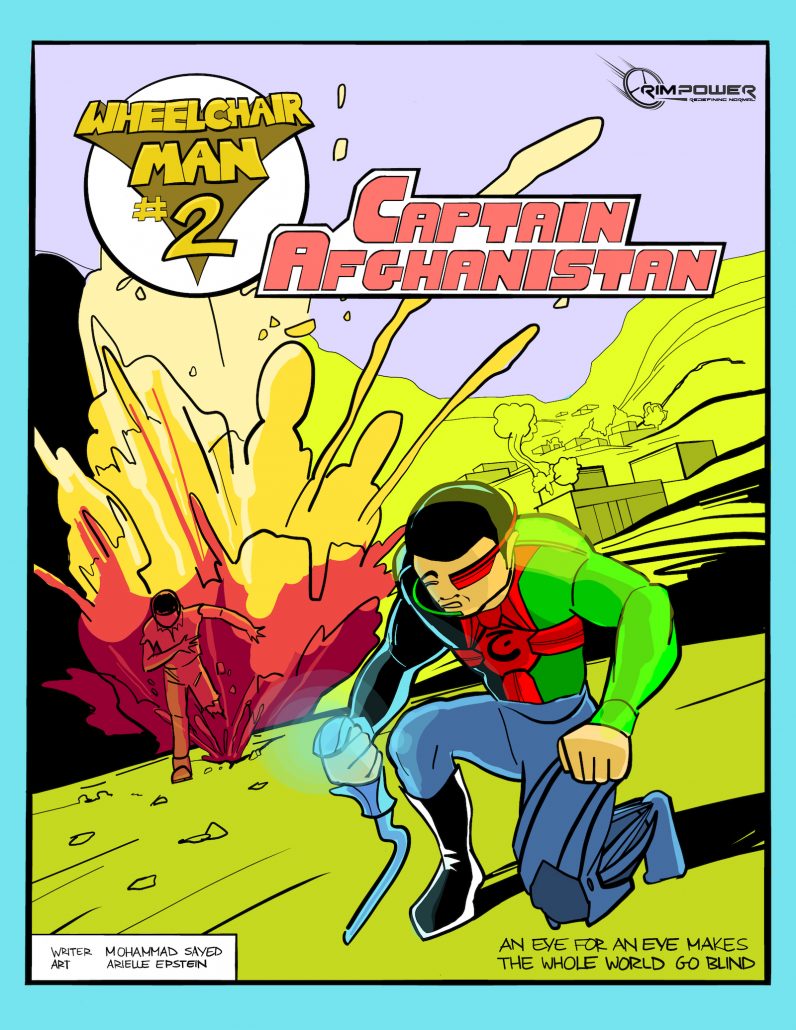 Wheelchair Man is based in part on Sayed’s own life in a wheelchair.

How did you get started on the project?

People said, “You’ve never even held a comic. How are you going to write a comic book?” But I didn’t see it that way. It was more than just a comic book character. I see the project as something that’s trying to challenge the status quo that people in wheelchairs are not capable of achieving great things.

I see the project as something that’s trying to challenge the status quo that people in wheelchairs are not capable of achieving great things.

I took a two week course to learn about comic books. I know my story best so wanted to base it on that. The goal was to create five original superheroes. Wheelchair Man is from Afghanistan; Wheelchair Boy is from South Africa; Wheelchair Girl is from India; and Wheelchair Woman we are hoping will be from Ukraine. These are the sorts of countries where people with disabilities are looked down upon, marginalized and stigmatized. The way they are viewed is really unfair. They don’t have the kinds of opportunities we have in the U.S., even though we have problems here.

On July 25th, I’m releasing Wheelchair Man Book Two. We’re introducing Captain Afghanistan, who is not in a wheelchair. This story is based on my best friend’s story, the one who lost an eye and a leg to a landmine. Each superhero will have three books.

What are some of Wheelchair Man’s superpowers?

He makes criminals see the consequences of their crime before they commit it. He can also fly with his wheelchair, which is kind of its own character. It also has other powers, which he’ll discover throughout the series. He will, however, never touch weapons or use violence. If he touches any weapon, he will lose one of his powers. His main powers are psychological. He’s all about making the world a peaceful place.

Who is the villain?

In the first book we don’t have a specific villain; you’re just learning about the characters. Because of the situation that this boy has been through–he has lost everything– and the way that society views him you could say that the whole society is the villain. 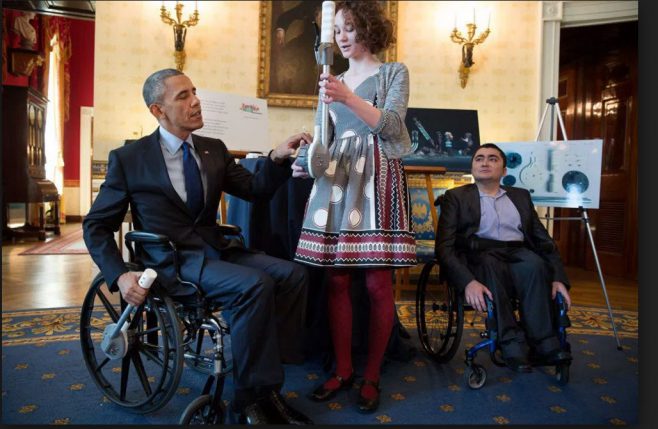 What kinds of reactions has Wheelchair Man provoked?

It’s been absolutely amazing. RimPower’s vision is to empower wheelchair users and inspire the general public. To that end we’ve been working with the U.S. embassy in Kabul who translated Wheelchair Man into Farsi and Pashto then distributed 1,500 copies to homeless shelters, orphanages and schools throughout Afghanistan. I also gave a live stream talk to nearly a thousand people throughout 23 provinces in Afghanistan. We have also worked with organizations that have a similar vision in Cambodia and now trying to figure with the the State Department how to expand elsewhere in the world. I have also visited schools here in the States and receive regular messages through Facebook from disabled readers. I want disabled kids to know that anything is possible, that they are superheroes themselves–they don’t have to look up to anybody else. It’s humbling to see the impact.

I want disabled kids to know that anything is possible, that they are superheroes themselves–they don’t have to look up to anybody else.

How much in Wheelchair Man is based on real-life experiences?

All our superheroes are based on real-life stories; they’re nonfiction superhero books. The whole purpose of the first issue is to introduce the real humans in it. Wheelchair Man starts using his superpowers only in the second book. In Afghanistan when a child or a young person loses their family the Taliban or some other crazy group takes advantage of those children and brainwashes them into thinking that all foreigners are enemies or that the soldiers are here to kill our families. It has always been my dream not only to empower these people but to send a message that if we can be taught how to hate, then we can certainly be taught how to love.

In my case, before coming to the U.S., my heroes were all warlords. I believed they were there to protect us. I looked up to them. Then I came to the U.S. and I learned about Gandhi and Nelson Mandela. All these people use peace to fight for peace and that’s my dream. That’s why my characters are based on real life stories. There are real heroes in the world that we need to celebrate rather than just creating superheros that are based on bugs. It’s a mixture of fiction and reality. 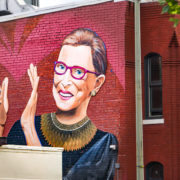 RIP, RGB. I Hope The ACA Doesn't Die With Her.
Emily Lemiska
Depression Doesn’t Happen After Pregnancy Only

Agent Lupus in the F.B.I.
Don’t miss one more amazing story.
Every week, we’ll send a few of our favorite stories to inspire you.
Send this to a friend
Scroll to top