An Extra Chromosome For Excellence

Carlos de Saro was born with Down Syndrome, but with the help of his mother's love, he has become an incredible role model.
down syndrome 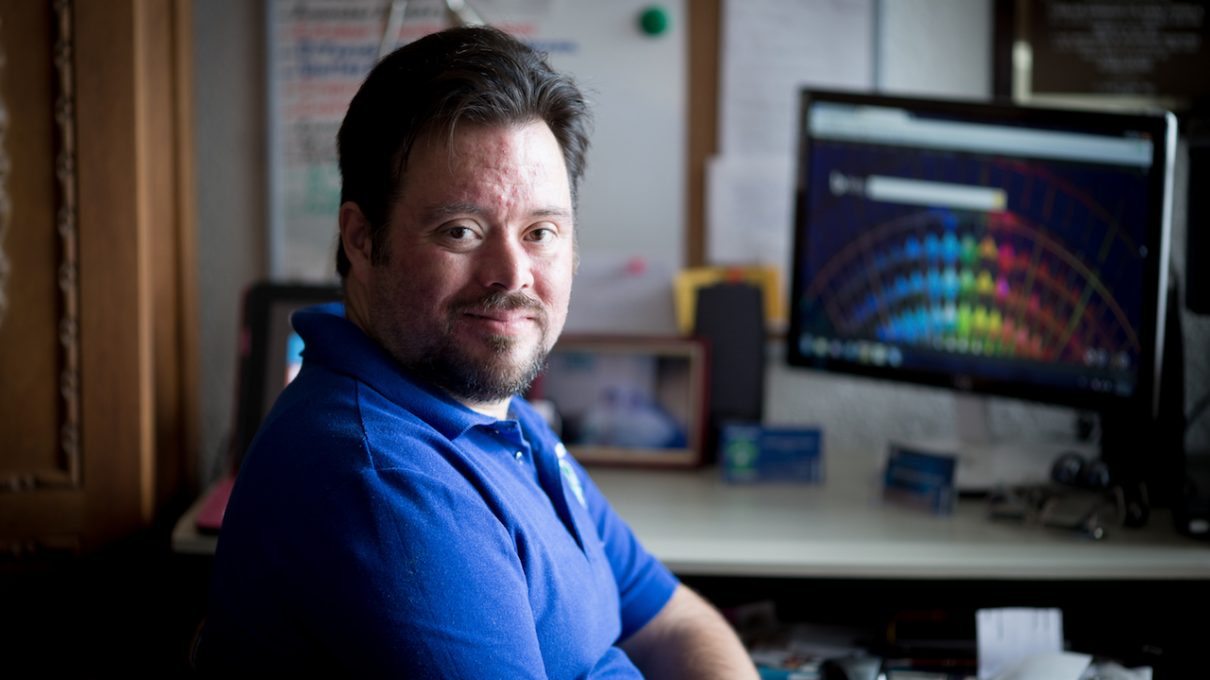 Carlos de Saro doesn’t have a short list of accomplishments.

The 39-year-old, who has Down syndrome, received the Morelos state human rights award and Mexico’s Gaby Brimmer award for people with disabilities. He has given speeches in front of hundreds of people and made impressive appearances on Mexican television. And he is currently taking courses at a large public university.

But if his story sounds unique, for de Saro’s mom, it only goes to show what people with disabilities are capable of.

About five years ago, Puebla and her son founded the non-profit Luchando Contra La Adversidad, or Fighting Against Adversity, which aims to help people with disabilities know their potential.

The organization, which is based in the central Mexican city of Cuernavaca, offers one-on-one classes every Tuesday through Friday and has helped about 50 students and their families with a variety of disabilities ranging from Down syndrome and blindness to autism and intellectual and motor deficiencies. 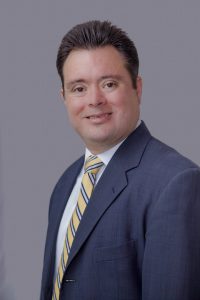 Classes led by de Saro might focus on helping students learn their colors, draw within lines, or read, while talks given by his mother lean towards helping other parents understand their child’s needs.

Their initiative appears to have met a need: Classes have been so popular in their home state of Morelos, that the mother-son duo has turned away students.

“In Mexico we don’t have a book in children’s schools that says, ‘You have to help them, look at them normally, give them attention,'” says Puebla. “Some (parents) feel guilty because they say, ‘I let my son fall behind, I didn’t help him. I didn’t give him the attention I gave my other son and now I’m ready to help.'”

The classes aim to offer support and are free except for a 50 peso ($2.50) recommended donation.

In part, they are also a reflection of the duo’s own experience seeing that resources for people with disabilities can be scarce—and there isn’t always guidance in Mexico.

In fact, for most of her son’s life, Puebla says she wondered how to tell her son that he had a genetic disorder.

So she waited to see what advice she would get and she focused on being a mom. She taught de Saro how to count and read and write. She made sure his homework was complete. And she showed him how to walk to his Montessori school alone, even while discreetly following behind him at a distance.

“I dedicated herself totally to him” so that “he would know what life is and what he could and couldn’t do,” she said.

A few years ago, the president of the Morelos state human rights commission met de Saro at an event for people with disabilities and was impressed by his good nature. The president invited him to work on various tasks such as archiving commission materials and accompanying staff as they did outreach for people with disabilities in poor, far-flung communities. 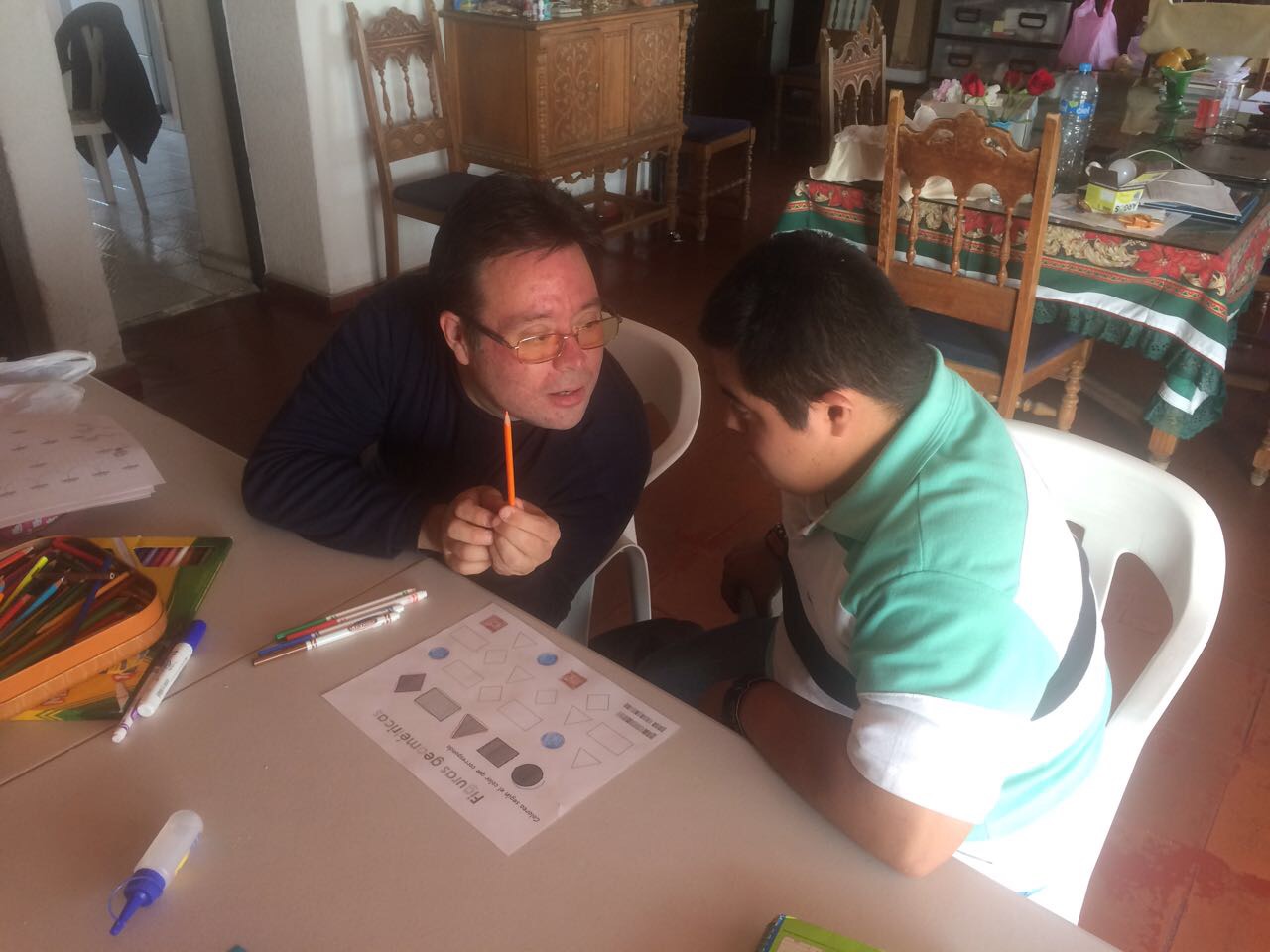 Carlos at work teaching a student.

And it was that work that gave de Saro and his mother an idea that they could do more to help.

The duo began giving lessons in a classroom at the commission, and de Saro eventually began receiving invitations to speak about his experience in Mexico, the U.S., Colombia and Panama, among other places.

His talks—which have emphasized that people with Down syndrome are human beings with “the same feelings, the same values and the same emotions” —can quickly bring a tear to his audiences’ eyes.

But at the heart of his message is a simple idea: As his own life shows, believing in someone with disabilities can go a long way.

For her part, Puebla continues to let her son walk ahead, but is still just a few steps behind.

When her son began giving conferences, for example, she recalls sitting at the front of the room and taking notes. Then, she would  say: “‘Look,my love, you repeated this, and these words weren’t used correctly. Or ‘remember that you should use a napkin to dry your mouth and sit up straight because your presence is important, or be careful what you eat so your suit fits you well.’

“In the beginning, I taught him all the motions, like how to check a bag, and so now he does it on his own. But I’m aware of what he’s doing and if there is something that he doesn’t do well, I tell him, ‘We’re going to do this and this,'” she says. 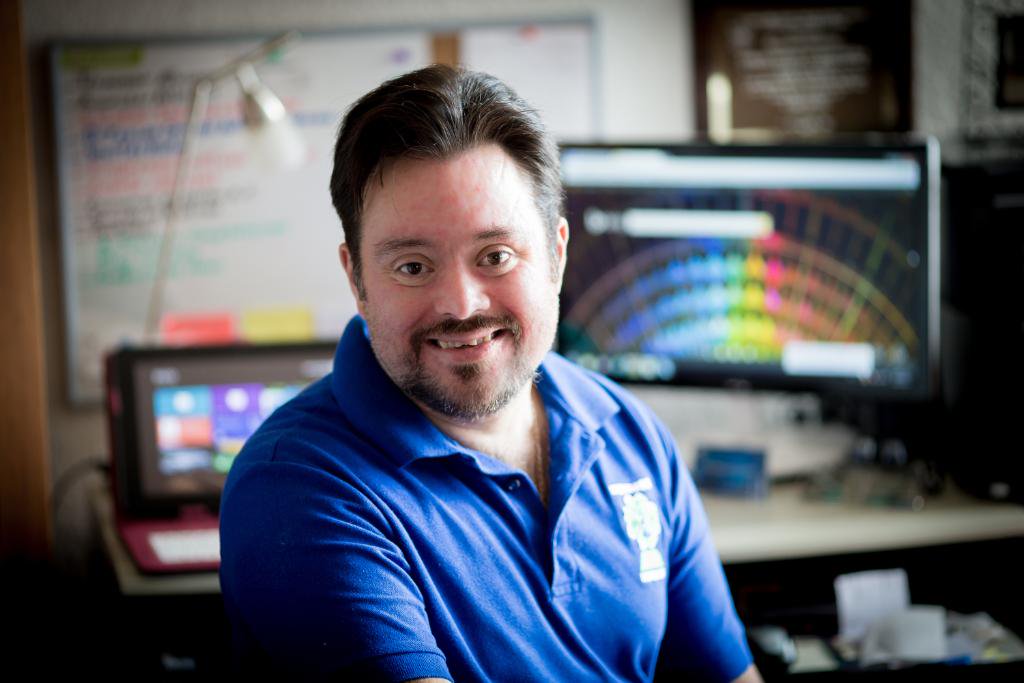 “And like that— always playing, but saying things that are necessary: ‘Walk straight, order something reasonably priced when someone invites you to eat, say ‘thank you’ and ‘bon appetit,'” he learned.

After a 7.1-magnitude earthquake struck in Mexico last September, the organization’s classes were moved to their house, but in due time Puebla and her son hope to return to a classroom at the commission, where there is more space to host additional students.

Puebla also has other ideas in the works.

“I’m asking for an abandoned house to be donated so it can be used for people with disabilities, who are mistreated by their family,” she says. “No one pays me attention, but the day will come when someone is moved and will say, ‘You’re right, our children need attention.'”

As for her own son’s accomplishments, she says she is grateful.

“I gave thanks to God that he was born,” she said. “Now I give more thanks that he helped guide me so that he became what he is now.”

Elizabeth Limbach
Useful Resources
Do you know someone else who would enjoy this story?
You might also like...
Being Miss Amazing
Susan Johnston Taylor
The Criminologist Who Came Out Of The Closet As Mentally Ill

Taking The White Dress Back Out Of The Closet
Don’t miss one more amazing story.
Every week, we’ll send a few of our favorite stories to inspire you.
Send this to a friend
Scroll to top