The Art Of Coping With Brain Injury

Dutch artist Tom Heerschop aspired to be the greatest artist since Leonardo Da Vinci. Then he developed a brain tumor the size of a sweet potato.
acquired brain injurybrain cancerbrain damage

In 2008, Amsterdam-based artist Tom Heerschop was in his kitchen on his son’s sixth birthday, about to cut the cake, when he felt a violent pressure in his head. “My head felt like a train was arriving, and I had to catch that train,” Heerschop says. “I ran downstairs. I heard strange sounds and smelled strange smells. I thought I’d gone completely crazy.” Outside, he had a seizure, his first. It lasted for 45 minutes.

After waking up in the hospital, Heerschop asked for an MRI scan. Doctors in the Netherlands don’t automatically administer MRIs to patients suffering from seizures, but Heerschop insisted. One month later, a scan revealed a benign tumor, the size of a sweet potato, in Heerschop’s brain.

Though tumor discoveries are not usually described as such, “it was a big relief,” Heerschop says. Finally, “everything made sense.” For ten years, he had been afflicted with severe depressions, violent outbursts, migraines, and personality changes. He illustrated these afflictions in his daily “Depression Diary.” In self-portraits from the diary, the artist’s brains explode out of his head, his face is pocked with greenish boils, his eyes are black caverns. Though he tried everything from psychoanalysis to singing bowl therapy, none of his symptoms responded to treatments. When the tumor was discovered, Heerschop realized, for the first time, that his psychological condition had a physical cause.

Though tumor discoveries are not usually described as such, “it was a big relief,” Heerschop says.

Growing up in Bussum, a town 20 minutes from Amsterdam, Heerschop loved to draw. “As a kid, I was in my most natural habitat when drawing,” he says. “It made me quiet and happy. Everywhere we went, I had my little notebook.” He attended a Waldorf School, known for its encouragement of children’s creativity. At 16, he started taking weekend painting courses, and by 18, had his own atelier. At the Rietveld Academie Amsterdam, a prestigious fine arts university, he studied photography, drawing, design, and painting, and graduated in 1996. Shortly after, he got married. He felt like he was at the top of his game, “in control, at ease,” and that showed up in his artwork: Crisp pencil drawings of barns, trees, and silos; quietly surreal ballpoint illustrations of bakers baking bread.

But when he was 25, getting his master’s in art at the Sandberg Institute, Heerschop felt his psyche shifting. He began to experience depressions of a depth he’d never felt before. Crushing headaches led a doctor to prescribe him painkillers. And though he’d “always been gentle,” he started to hit his wife. At one point, he broke her shoulder bone. “I knew something was going on, but I didn’t know what it was,” Heerschop says. 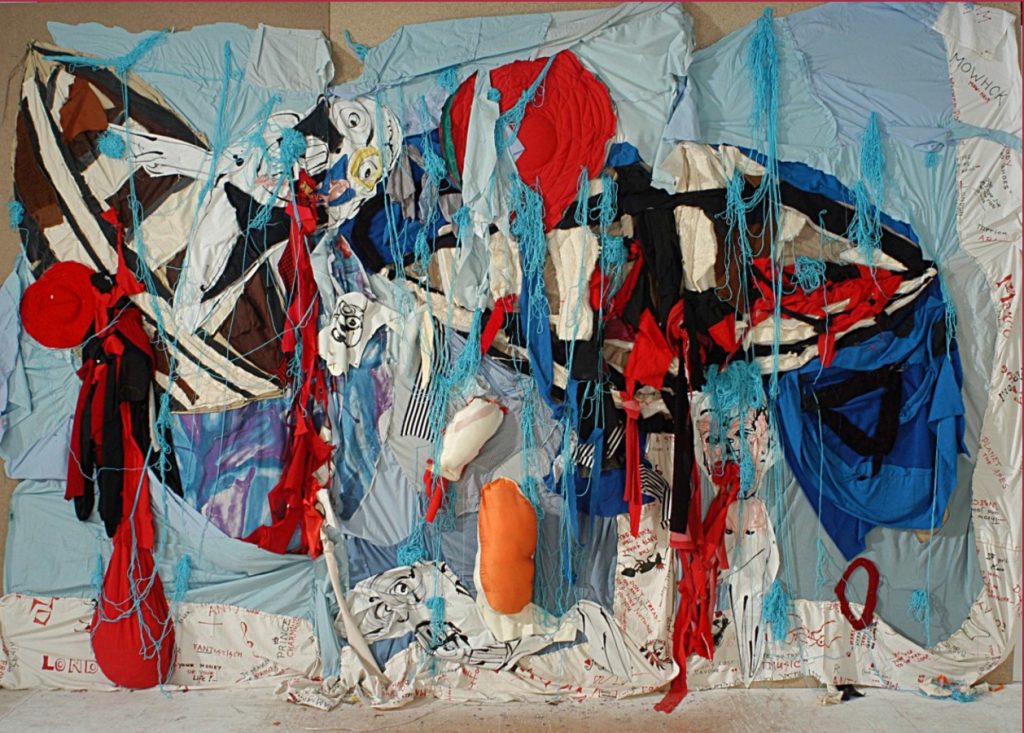 One of Tom Heerschop’s larger murals, completed before his diagnosis.

At his wife’s urging, he tried various forms of therapy: Psychoanalysis, rebirthing sessions, hypnotherapy, acupuncture, tai chi, relationship counseling. “Therapists tried to figure out what was wrong with me—they asked about my parents, my childhood, work-related stress, stress with my former girlfriend,” Heerschop says. “It never stopped, and none of it helped at all. That went on for ten years.” Over those years, Heerschop and his wife had three sons. At first, he was a gentle father, but soon became temperamental and violent.

Drawing was one of his few non-destructive outlets, and he was wildly productive in the studio. He made more than 100 works a year and appeared in solo and group exhibitions in the Netherlands and Italy. “A drawing a day keeps the doctor away,” he wrote of his “Depression Diary,” begun in 2000. Some work from this diary is psychedelic, lighthearted, in fauvist colors: A fuzzy stuffed penguin and a ginger cat are recurring characters. But much of it is tortured: A man in a crown slices his own head off with a kitchen knife, his black ink guts spewing; webs of paint smother the faces of sickly men with purple eye bags; an Easter rabbit with a basket of eggs gropes a nude woman; a horned demon sits in a wheelchair; a pink body curls on a cot in a jail cell. Compared to the quiet, controlled drawings from Heerschop’s college years, these works suggest psychic chaos.

“Not once did anyone come up with the idea that maybe all my problems had something to do with something inside my body, instead of my personality,” Heerschop says in a 2013 TEDx talk.

The operation that removed the tumor left a scar shaped like a backwards question mark curving from his hairline down to his ear. Though recovery from the surgery was tedious, “I felt born again, for a while,” Heerschop says. “It felt like a new start.”

But there was no happily-ever-after to follow. Even after the tumor was removed, Heerschop still struggled with erratic behavior and strange symptoms: Headaches, memory loss, fatigue, irritability, aggression. Sounds overwhelmed him. And, when he returned to the studio to draw, he felt slow and stuck. “In the past, when I made drawings, it was like opening a never-ending stream,” he says. “Now, this stream had dried up.” After Heerschop waited eight months for an appointment at a neuro-rehab center in Amsterdam, a neurologist diagnosed him with Acquired Brain Injury (ABI) in ten minutes. The tumor had done considerable damage to his frontal lobe. 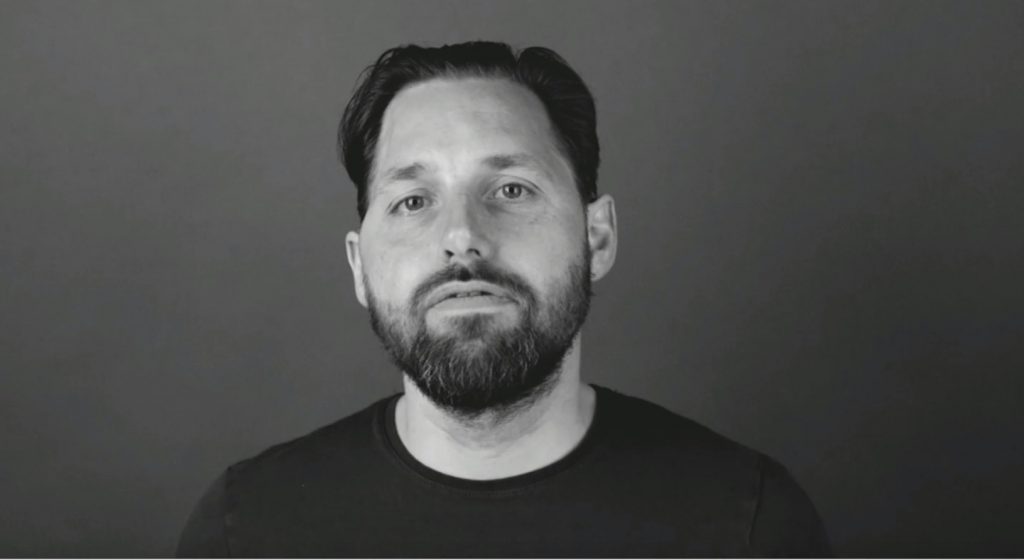 An intensive neurorehabilitation program educated Heerschop about ABI and taught him coping mechanisms, like mindfulness and body scan exercises, which he now does for 35 minutes a day. “It leaves me feeling completely reloaded,” he says. “I’m trying to draw with more mindfulness.” But the damage is irreversible, and challenges persist. About every three months, he has a seizure. After working for 45 minutes, he’ll have to rest or take a nap. “Thinking is tiring. If a child is talking while the TV is on, those sounds together are too much for me.” But for the first time in his life, he knows the cause of these symptoms, and has a support system that helps him manage them.

After the surgery, Heerschop and his wife split up. Two and a half years ago, he reconnected, via Facebook, with Bregje deVries, a former girlfriend, whom he’d fallen in love with while “young and kind of restless.” Now, “less restless,” he lives with DeVries, an educational scientist, who acts as his agent and helps him manage his medications and schedule.

In a way, this disease helps me to be much more reflective in everything I do.

“In a way, this disease helps me to be much more reflective in everything I do,” Heerschop says. “So many people just go into work and work too hard to earn money and come home and don’t think about it. I really have to think about the worth of everything I do.”

Heerschop’s life story is front and center on his interactive personal website, designed earlier this year by Utrecht-based Studio Airport. In a black-and-white video loop, the artist stares out from the homepage, blinking, occasionally laughing or scratching his nose. When you click on his head, animated fragments of his drawings pop up: A purple lizard-creature flicks its tongue; a bug-eyed bluebird peeks into the corner; a bonfire sprouts from Heerschop’s forehead. “There was only one way to make this site: Putting Tom’s photograph as the front door you have to go through to get to the work, entering his head and following all the series of works that sprang from it through the years,” deVries says. Nearly 1,200 of Heerschop’s artworks are displayed in chronological series from 1996 to 2015. Together, the series of drawings tell the story of his illness from the inside out: You see the evolution from crisp, controlled monochromatic still lifes, to scrawled stream-of-consciousness works in riotous color, to drawings about the tumult and excitement of early parenthood, to the depression diary, to hallucinatory works made while recovering from surgery, featuring cross-sections of brains and slinkies popping out of skulls. 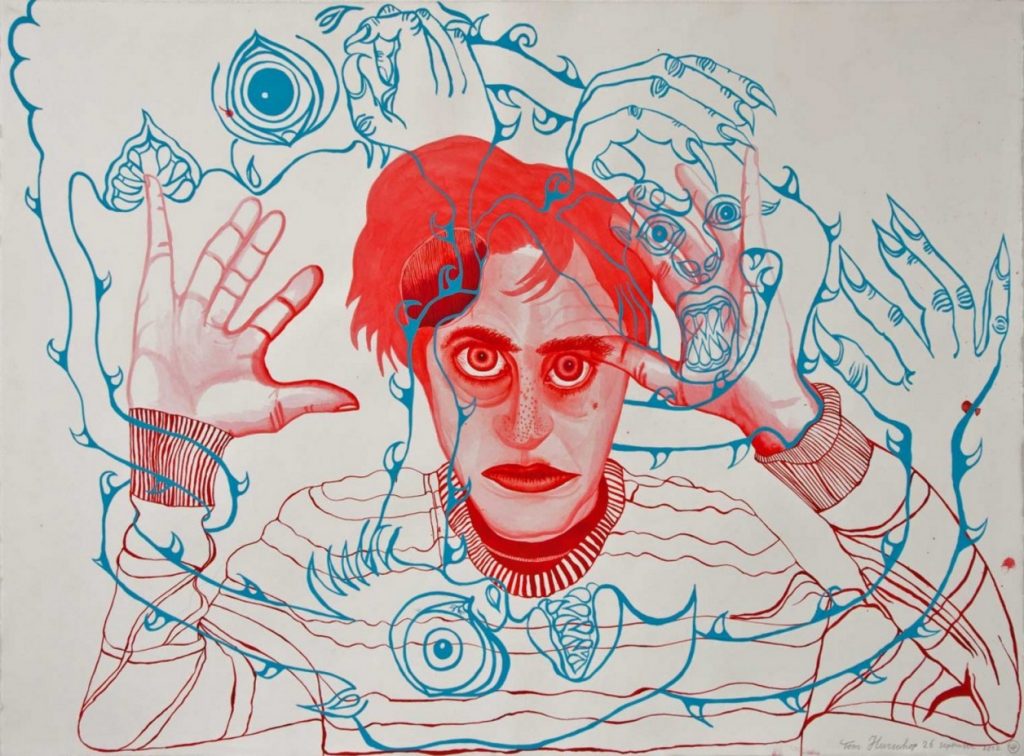 One of Heerschop’s later drawings, made as he recovered from brain surgery in 2012.

Before his operation, Heerschop averaged one drawing every two days; now, he’s lucky if he finishes one in three weeks. Instead of aiming to match the machine-like output of his earlier years, he’s changed his approach, experimenting with large-scale, ongoing works. “I let go of the idea that you can finish a drawing. It’s much more difficult for me to make one single image—that blocks me, in a way,” he says. “I’m now trying to find a way to make endless drawings.” His most recent work, a nearly 30-foot long panorama in black marker on white paper, took four months to complete. Featuring serpents and phalluses emerging from flames, bodies with giant eyeballs for heads, missiles with legs, and fractal-like arrangements of pencils, it was an abstract response to the terrorist attack at Charlie Hebdo in January 2015.

“I’m not yet in a place where I’m making my best work after my operation,” Heerschop says. “He’s always doubting his work,” deVries says. “But I’m his biggest fan.” Despite the perilous setbacks, he doesn’t plan on retiring any time soon. “Drawing is more than a job— it’s my love, it’s my blood,” Heerschop says. “I’m gonna draw forever.” 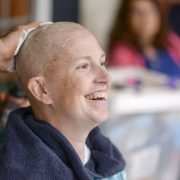 How To Deal With Chemotherapy: Everything You Need To Know
Gia Miller
Riding, Running, and Swimming To Beat A Fatal Genetic Disease

Clowning Around
Don’t miss one more amazing story.
Every week, we’ll send a few of our favorite stories to inspire you.
Send this to a friend
Scroll to top