Beautiful Girl On A Distant Planet

In the '70s, my best friend seemed like a prophet and a poetess from outer space. But she had schizophrenia, and as her symptoms worsened, I failed her.
mental illnessschizophrenia 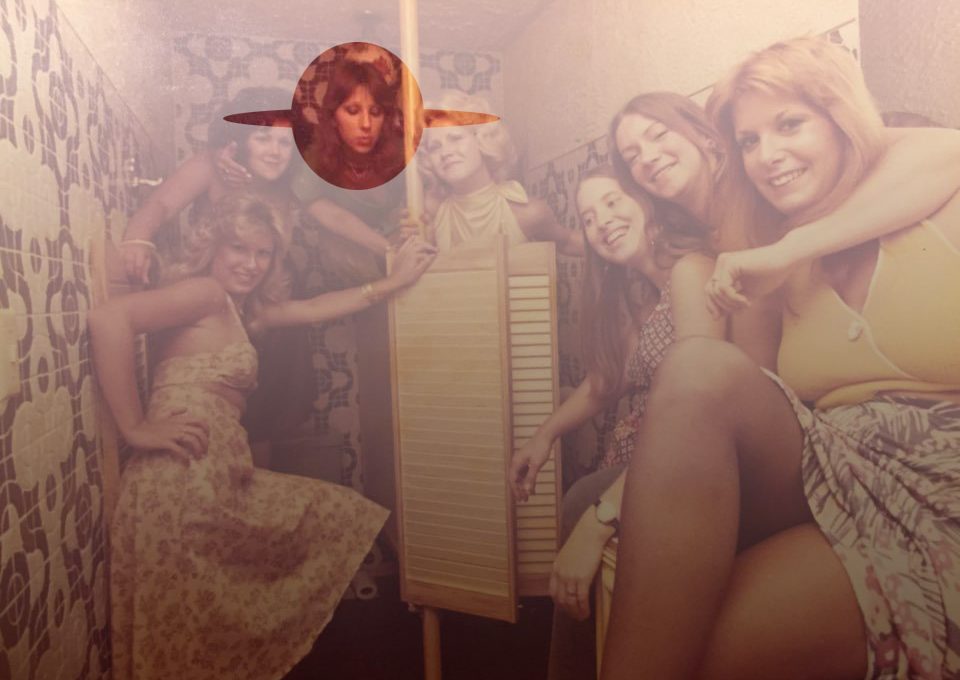 In her cosmology, Bozling was an alien who lived on another planet.

Kathy was my best friend. Bozling, she said, communicated with her telepathically. One fall night, the leaves still magenta under the stars, she said, crying: “Here’s a tear because Bozling’s not here.” Bozling said, through Kathy, that he had the ability to see our past lives, or akashic records, which are a compendium of everything that has ever happened or will happen on earth. Apparently, in past lives, I’d been a gypsy, a water carrier, and a poet.

It was the late 1970s, the days of Ziggy Stardust and The Spiders From Mars. Bowie was more than just a rock musician: he was our high priest, and we dressed accordingly. I had a platinum buzz cut and wore silver platform shoes along with men’s neckties and suits. Kathy draped herself in long silk scarves, and painted the moon and the stars in acrylics and glitter on her jeans. We were 16, and perfectly matched.

Kathy didn’t seem sick then. I thought she was plugged in to a higher realm.

I liked the idea, metaphorically, of an interplanetary being. The whole star man ethos was definitely in the air for us. I was reading Edgar Cayce, the American mystic, at the time, and my boyfriend was practicing to see if he could astral project in his sleep at night. I wrote poetry about Bozling, and Kathy sketched pictures of him; a spaceman with antenna, alone, on a cold planet, not unlike the hero in Antoine de Saint-Exupéry’s The Little Prince.

The whole star man ethos was definitely in the air for us.

Bozling said many of the same things as Cayce: that we have many lives and many masters, that some of us were reincarnated from the lost city of Atlantis. It was around this time that her appearance started to change. She lost weight. Her olive skin grew pale. Her eyes seemed to get bigger. Her make-up, once meticulous, became more outlandish; yellow and pink eye shadow, smudged dark lips. Before she reminded me of an Egyptian princess, now she started to look like a ghost.

Initially, I didn’t pathologize any of Kathy’s new behaviors: not the change in her appearance, her new found psychic ability, or even her interplanetary friend. It never occurred to me that she was sick, that these were classic symptoms of schizophrenia. We’d certainly been chasing transcendence in many other forms including LSD, so the idea she might’ve found it, another way of being, another way of thinking… honestly, I was jealous.

But even if I didn’t think there was anything wrong with her, other people did. Her mother was a registered nurse who’d regularly pull me aside and say: “Kathy’s mentally ill… Why her and not you? You both did drugs” And our friends would say: “She’s so far out there, she’s never coming back”.

In The Inward Journey, Joseph Campbell writes that: “a schizophrenic breakdown is an inward and backward journey… [the person with schizophrenia] has tipped over and is sinking, perhaps drowning…and his long deep dive to the bottom of the cosmic sea to pluck the watercress of immortality, there is one green value of his life down there. Don’t cut him off from it. Help him through.” This is, in fact, what other cultures do. Olga Khazan, writing for The Atlantic says that Eastern and African cultures tend to emphasize relationships and collectivism. There, a hallucination was more likely to be seen as just another point in the schizophrenic person’s already extensive social network.

But Kathy didn’t live in Asia or Africa. She had schizophrenia and lived in America, where she was isolated for it. Nobody else saw the poetry, the imagination, or the possibility of interstellar travel; they saw insanity.

She had schizophrenia and lived in America, where she was isolated for it.

Two years later, and her symptoms worsened. I graduated from high school, but she didn’t. One night, our friend Sam, who owned a local nightclub, took Kathy and I out to dinner at an Italian restaurant. It was famous in our hometown, and Sam knew everyone. Sam and I got pasta, but wraith-like Kathy only ordered a shot of whiskey. When our meals were served, she drained the glass, and then threw up in it; silently and casually.  Sam looked down at his plate, swimming in cheese and tomato sauce and said: “I can’t finish this meal.”

After we drove her home, Sam told me: “I can’t do this anymore.” I’d been her apologist for so long, but I couldn’t argue. I was exhausted.  I respected her visions, but in the face of so much scorn and fear, she really started to slip away. And it didn’t help that throwing up in a shot glass became a routine for her. I don’t know if she did it to shock people, or if she was genuinely nauseous, and I never asked. She did it again, the second time, at Sammy’s bar. After that, it became regular. Everyone avoided her.

Her parents chastised her. I think they had this idea that if she would stop doing drugs, everything would return to normal. And in our close knit Russian and Polish immigrant community on the banks of Lake Michigan, we all tried to hide what went on behind closed doors. Her parents didn’t bring her to see a doctor. Shame kept them from helping her. Shame kept Kathy trapped, alone and isolated.

The U.S. National Library of Medicine reports that the 1970s “was a decade of increasing refinement and specificity of existing treatments for schizophrenia. There was increasing focus on the negative effects of various treatments, such as deinstitutionalization, and a stronger scientific basis for some treatments emerged. For instance, the field of somatic treatments saw a greater and more sophisticated use of lithium.”

I was 19 when I left town, the same time when the lithium landed. Kathy was still a wraith, out of step with the world, but now she was sedated; the cord cut between her and her starman in the sky. Now she, not Bozling, was the alien on a cold planet.

Kathy was still a wraith, out of step with the world, but now she was sedated; the cord cut between her and her starman in the sky.

Cecilia McGough, an astronomy and astrophysics major at Penn State, and Virginia Aerospace science and technology scholar, recently gave a TED Talk about her schizophrenia. She makes the point that this illness is unique to each person; what is true for one person with schizophrenia may not be true for another. The disorder is a constellation of symptoms. She is hesitant, she admits in her TED Talk, to tell other people about her hallucinations because “people usually look at me in fear after I tell them what I see.” She defines her schizophrenia “as someone who cannot turn off her nightmares even when she is awake,” and refuses to acknowledge her hallucinations, even though her own personal Bozling–a Pennywise-like clown that only she can see–was in the audience for the TED talk that day.

I can’t help but wonder about how McGough has managed to accomplish so much, when Kathy struggled so profoundly. Perhaps it’s the meds; the drugs they diagnose people with today for schizophrenia are far less debilitating than the lithium that was used to sedate Kathy. Or maybe it’s McGough’s extensive social network, which “helps her through” her visions.. Perhaps together, this modern collectivism, along with better meds, have allowed her to move through this world in a way that Kathy, born in the wrong place and time, could not. 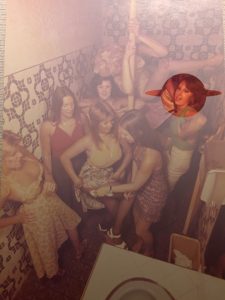 Our tribe, before we left Kathy behind.

After Bozling was banished to the coldest, darkest parts of the cosmos, I heard, through friends, that she spent much of her time at a bar near the railroad tracks, throwing down whiskey shots until eight in the morning. One day, a few years after I moved to New York City, I went to visit her; she still lived at her parent’s house, where her family kept her hidden as much as possible. When I went into her room, she was playing Low by David Bowie. I was shocked by her appearance. She didn’t even look like the same person anymore; the lithium had changed the contours of her once striking profile. My olive skinned gypsy girl with the aquiline nose was gone, replaced by someone pale and hollowed.

Somewhere along the way, we had all failed her. It was partly the shame of our immigrant community where everybody knew everyone else’s business, or thought they did. It was also a time in the culture when mentally ill teenaged girls were hidden from the rest of the world; a mid-century version of the madwomen in the attic. Unlike McGough, she didn’t have a community who would try to understand the unique wiring of her brain.

Even I, her greatest advocate, couldn’t be exonerated from leaving her behind. In my last days in town, she had frightened me. I didn’t think she was tapped into a greater reality anymore. I saw how sick she had become. I wish I’d taken the time to speak candidly with her mother. I think we both hoped that the girl we once loved would spontaneously reappear. Neither of us ever said schizophrenia. As Campbell suggests, there wasn’t anyone to help her through: simply by listening, not judging. That was my role, but I had abandoned it.

About 15 years later, I went back to my hometown  for my grandmother’s funeral. Taking a break from the service, I went outside and smoked a cigarette on a bench, when a middle aged woman with a bad perm sat down next to me. I thought she was a relative. She didn’t say a word, just smoked in silence. Later, my sister said, Kathy saw you at grandma’s funeral. Why didn’t you say hi?

And then I knew: the woman sitting next to me was Kathy. Of course she looked like a relative. I’d once loved her so much.

In Treating Chronic Illness, “Normal” Is Not Always The Right Standard
Amanda Lien
This Doctor’s Mysterious Brain Infection Taught Him Empathy Through D...

Making A Baby When You’re Queer
Don’t miss one more amazing story.
Every week, we’ll send a few of our favorite stories to inspire you.
Send this to a friend
Scroll to top