Because Chemo Is Scary Enough Without Wigging Out

After her own cancer treatment, Nancy Riviere started Wig Out, a non-profit dedicated to getting free wigs to women who want one.
cancerchemo

In 2014, Nancy Riviere is a brunette, but she’s decided one of her wigs should be blonde. It just seems more fun, and god knows she needs some fun right now. In the wig shop, she sits quietly in front of the mirror watching as the sales clerk pulls the curly, shoulder-length hair piece over her head. Riviere still has her hair, but knows that in just weeks, she’ll be bald.

Riviere, then 41, had just been diagnosed for a second time with invasive ductal carcinoma,the most common type of breast cancer. The diagnosis came just nine months after her last reconstructive surgery, itself following a double mastectomy, and two-and-a half-years after she first found a lump in her left breast. 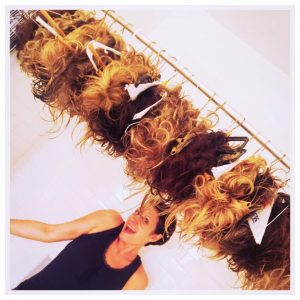 Nancy Riviere, founder of Wig Out

But this time, she needed chemo, and it was this painful, intimate experience of shopping for a wig that led her to create Wig Out, a non-profit that donates repurposed, high-quality wigs, headscarves and hats to women across the country who’ve lost their hair during chemotherapy.

Cancer came into Riviere’s life in May 2012. On vacation over Memorial Day weekend, Riviere, who was 39 at the time, found a small, round, painful mass under her breast while doing a breast self-exam. “At the time, I didn’t go to that place in my brain, that it could be cancer,” says Riviere, a former event planner.

So when Riviere was diagnosed the second time and told she’d have to have chemo, she wanted to feel prepared.

Riviere knew the drugs would whittle away at her hair. It would start to come out in clumps in the shower; in the mornings, she’d find her pillowcase plastered with wisps that had fallen out overnight. She wanted to be ready for the inevitable, so took a trip to a local wig shop in her hometown of Houston, Texas.

Today, remembering that first experience while she washes donated wigs in the sink of a guest bathroom in her bright and airy mid-century modern home, Riviere remembers her surprise at how little the women there had thought of the experience of women like her.

“It’s a shocking thing to try on wigs knowing you’re going to be bald.”

“The women there could not have been nicer, but the experience was scary, sad and somber,” she says, as long brown locks, blonde bobs and salt and pepper ‘dos drip dry from hangers hooked over the shower rod. “It’s a shocking thing to try on wigs knowing you’re going to be bald,” she says. “No one at the store had been through the experience herself. No one had walked the walk.” 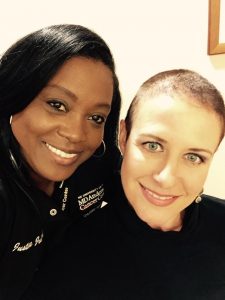 Nancy and hair dresser when she got her head shaved for the first time.

It was then that a fuzzy idea popped into Riviere’s head. What if she could somehow help women in the same situation as herself feel different—comforted, reassured, and perhaps a little more confident and uplifted, despite the horrible circumstance they were in?

Several weeks later, Riviere sat in a barber’s chair at MD Anderson Cancer Center. She wore her signature cherry red lipstick, a mainstay throughout her treatment. It made her feel alive and put together. Her hair was patchy now, and she knew it was time to shave her head. When the volunteer hairdresser offered her a free wig, Riviere had already bought one, so instead, she asked if she could give it to her friend’s housekeeper, who had also recently been diagnosed with breast cancer.

“It changed her world,” Riviere says. “She couldn’t afford to buy a wig. It gave her the tools to face life and get back to work with pride and self-confidence. It restored her. I knew then there was really something to my idea. Something needed to be done.”

“It changed her world. She couldn’t afford to buy a wig. It restored her.”

For so many women, wigs are cost prohibitive. It’s not uncommon to shell out hundreds to thousands of dollars for a high-quality wig made of human hair, and they’re not covered by insurance. With lost days of work and stacks of healthcare bills eating away at income, many women have to make tough choices, between clothes and school supplies for their children or a wig for themselves. A wig won’t be the right choice for every woman, but studies show that hair loss, which can last for up to a year after treatment, is one of the most traumatic parts of cancer. If a wig can be the difference between a woman with cancer having the courage to face another day of treatment, and feeling alone and vulnerable, Riviere felt it should not be denied her.

Weeks after Riviere parted with her first wig, she gave her blonde number (which she never felt quite right in) to a woman she met during radiation. “It was just tears and tears, the two of us standing in front of the elevator at the clinic,” she says. The ability to help someone when they’re really on their knees, fighting for their life—that’s what helped lift Riviere up. 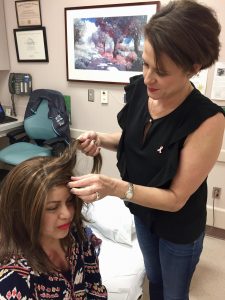 Wigs gave Riviere a respite from the constant reminder she had cancer, while Wig Out gave her a reason to keep going when she wasn’t sure she would survive. The next six months of chemotherapy–which included 33 days of radiation treatment, and several surgeries that removed her ovaries and fallopian tubes–were extremely trying, but she was motivated by her desire to ultimately help as many fellow women as possible.

Since Wig Out launched in the summer of 2016, Riviere has paired dozens of women with wigs: the non-profit currently  has 150 hair pieces, draped over Styrofoam heads and spilling out of bureau drawers, ready to donate. Riviere receives donated wigs from across the United States, washes them, pairs them with women based on a questionnaire and follow-up phone call, and mails them to the women along with a wig care kit, all for no charge.

Right now, Riviere is still working alone, but she hopes to soon expand the program. Next up for Wig Out? A dedicated office, as well as a fully-stocked van she can use to take her mission mobile, driving it to patients’ treatment facilities where women can receive a wig on the spot. “This can be easily replicated in cities across the world,” Riviere says. “I see it going there, I know it will.”

“Service to others really gets you out of your own head,” she adds. “ It’s so healing. And it takes just a little bit to help someone get back on their feet, to reclaim themselves.” 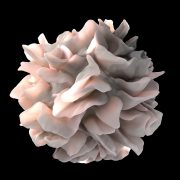 Immunologist, Heal Thyself
Kellie M. Walsh
The “Good Witch” Artist Finds Her Niche Babies, Get Ready For Blast Off!
Don’t miss one more amazing story.
Every week, we’ll send a few of our favorite stories to inspire you.
Send this to a friend
Scroll to top