Boxing Is My Pain Pill

After a shooting left him in a wheelchair, boxing champ Leo Samarelli won’t stop punching until the Paralympics and beyond.
adaptive sportsquadriplegia 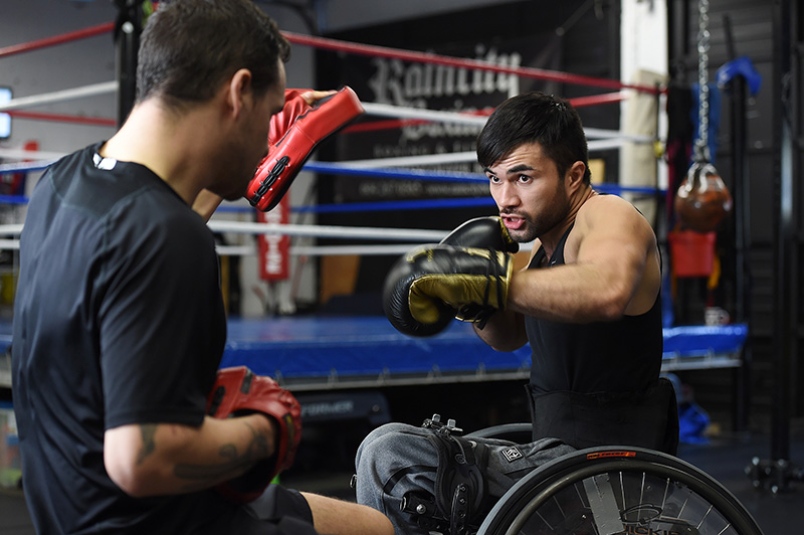 Vancouver born-and-raised Leo Sammarelli entered a boxing gym for the first time when he was visiting his uncle in Italy at age 14. He had noticed the tiny, living-room-sized boxing gym before, when he passed by on his way to soccer practice. But it wasn’t until an old friend of his father’s invited him to visit the gym that he became enamored with the sweet science.

“I fell in love with it and ditched soccer,” says Sammarelli.

For Sammarelli, who already played a wide variety of sports, boxing was something different. It was a full body workout, gentleman’s sport, “chess match with only one weapon to use,” and an International language.

“I learned a lot of my Italian in the boxing ring,” says Samarelli. “Even though some of them didn’t understand me, when we were in the ring and we were hitting each other it was a form of communication in a way – we really got to connect in that way. ”

Sammarelli comes from a family with a strong medical background, so, at first, they were skeptical about his participation in a sport involving blows to the head. But winning the inter-regionals in Italy in 2011 demonstrated his passion for the sport.

“It was definitely a milestone in convincing [my family] to support me in boxing,” says Sammarelli. “Being the first champion in my city in Italy, Monopoli, in the region of Puglia, was an honor to the family and an honor to the city itself.”

“[Sparring with Lomachenko] was like shooting hoops with Michael Jordan, or playing golf with Tiger Woods,” Sammarelli explains.

But in 2017, at 23-years-old, Sammarelli was shot four times near his home, leaving him paralyzed from a T9 complete spinal cord injury. The police believed the shooting was targeted, and the shooter—who was never apprehended—had mistaken Sammarelli for someone else.

Sammarelli’s path back to boxing was not straight, or quick. He spent over a month in the hospital, and several months in rehab before regaining independence. Afterwards, he engaged in other athletic pursuits (medaling in paraskiing and biathlon at the Canada Winter Games, and competing in hand-cycling) and took some personal detours (including a trip to Cambodia to distribute medical supplies). In the end, the encouragement of Sammarelli’s old boxing community prompted his return to boxing. At first, he began using boxing as a means of physical rehabilitation, to channel frustrations and lessen pain.

“I still struggle with the pain,” says Sammerelli. “And I don’t take any medication for any sort of pain. Exercise and boxing is my pain pill.”

“Exercise and boxing is my pain pill.”

After successfully learning how to box from a wheelchair, he wanted to share it with his community.  So, he launched the West Coast Wheelchair Adaptive Boxing Society (WWAB) (“a non-profit organization working to empower those living with disabilities by building up their physical capabilities through adaptive boxing”) and is one of pioneers of adaptive boxing: He crafted a skipping rope he could use in a wheelchair, trains both able-bodied and disabled people in person and virtually – in the sport, and aims to see it included in the paralympics one day. He also sits on the British Columbia Boxing Board of Directors.

And, in early October, Sammarelli plans to wheelbarrow-walk the Grouse Grind on his hands, with his brother and a friend holding his feet up. The Grind is a favourite hike among locals and tourists in the Vancouver area. With a 1.8-mile ascent, and an elevation gain of 853 metres, it’s a challenging climb for the average able-bodied person, known as ‘Mother Nature’s Stairmaster.’ He’ll be raising funds for his Society and Inner Hope Youth Ministries, a house for teens in East Vancouver, an area widely known for homelessness and drug addiction.

After your injury, were you aware adaptive boxing was an option?

I thought boxing was over after my injury. Early in my recovery stages, I weighed nothing and my stability throwing a punch was off.  I couldn’t even throw a punch without falling forward, or falling left and right. My body wasn’t up to it, and I thought to myself, “This is real pathetic.”

When I started boxing in a wheelchair, I didn’t know adaptive boxing existed. It’s fairly new right now. There was no “one rule fits all;” everyone was kind of doing their own thing. There was no one for me to really look at; there was no Vasyl Lomachenko in a wheelchair. Everything I knew was created by me and my coach (or whoever was helping me [at the time]).

“There was no one for me to really look at; there was no Vasyl Lomachenko in a wheelchair.”

[What really helped to get me back to it was]  looking at boxing from a rehabilitation standpoint, and the mental health aspect of punching something and getting my frustrations out. And also trying new things and adapting, slowly from shadow boxing, to figuring out how to skip, [and so on]. That’s what slowly pulled me into it. These little victories that I was able to achieve really built a ladder to where I am now.

How did it feel getting back to boxing after your injury?

It was kind of discouraging at first: Trying to do things that I could easily do before and not being able to do them, not having my hips, my legs, my feet to move around, and learning wheelchair skills. Just seeing people move around in the ring was hard for me to watch at first, honestly, because I would see things that the fighters would do wrong.

And I had to find a different way to teach. [For example, at first I thought:] “How am I supposed to show you how to throw a perfect right hand when I can’t show how to drop my legs and how to turn the hip over?” But now I feel because I don’t have the legs, I’m able to take it down to the fundamentals. I’m able to understand movement a lot better. I know it sounds weird, but I’m able to break things down better, and adapt, again. I can make it simple for people to learn. Because I had to relearn myself.

“Because I don’t have the legs, I’m able to take it down to the fundamentals. I’m able to understand movement a lot better.”

But boxing is much more than that. The way I live my life, for example, shows upcoming boxers that… even if I don’t have my legs, or I’m paralyzed or whatever, then I continue. I continue to teach the sweet science, and adapt. Whatever comes, not in boxing, but in life, in general, anything is possible.  If I’m able to change someone’s life in that way and help them live and appreciate more, then I guess it’s all worth it to me. It’s about much more than boxing.

While many around the world already box in wheelchairs, you mentioned a set of ‘one size fits all’ rules doesn’t exist. You’re currently working with World Disability Boxing to standardize adaptive boxing rules. What drives you to keep expanding and developing the sport of adaptive boxing?

Obviously, I’d love to see adaptive boxing in the Paralympics. We will be boxing in the Paralympics. It’s just a matter of time. What keeps me going is the thought of, again, that it’s much more than boxing. It’s imagining the impact [developing the sport] could have on people’s lives. Can you imagine if you’re a kid in Africa who is paralyzed or an amputee? They don’t have the social programs that we have, and a lot of them have been neglected by their families. If you got one of those guys and sent them to the Paralympics and got them training their whole life, that’s funding for them to live a better life from their own government. And if they start winning medals, it’s just setting one more example out there. I just see it doing great things.

How did you come up with the idea to wheelbarrow walk the Grouse Grind?

I was born and raised in North Vancouver; I was an outdoors guy. I loved the physical and mental aspects of getting in the outdoors.

“Everyone thinks I’m crazy for doing it, but honestly I’m going to be who I am.”

[But] I think that what really did it is, just [the idea of raising] awareness, not only to raise some money for the West Coast Wheelchair Adaptive Boxing classes that I’m holding [for an accessible ring, trainers, space, etc] but also to raise awareness for people with disabilities. And accessibility to the outdoors.

And how will you train for it?

Everyone thinks I’m crazy for doing it, but honestly I’m going to be who I am.

Renee Brincks
Do you know someone else who would enjoy this story?
You might also like...
Smoky Eyes Don't Come Easy
Fiona Tapp
With A Heart Full Of Hostas

Ask Ada: My Sister Exposed Me To COVID!
Don’t miss one more amazing story.
Every week, we’ll send a few of our favorite stories to inspire you.
Send this to a friend
Scroll to top