Building His Plane In Flight

After a spinal stroke partially paralyzed him, Chicago actor Michael Patrick Thornton doubled down on giving back.
spinal strokestrokes 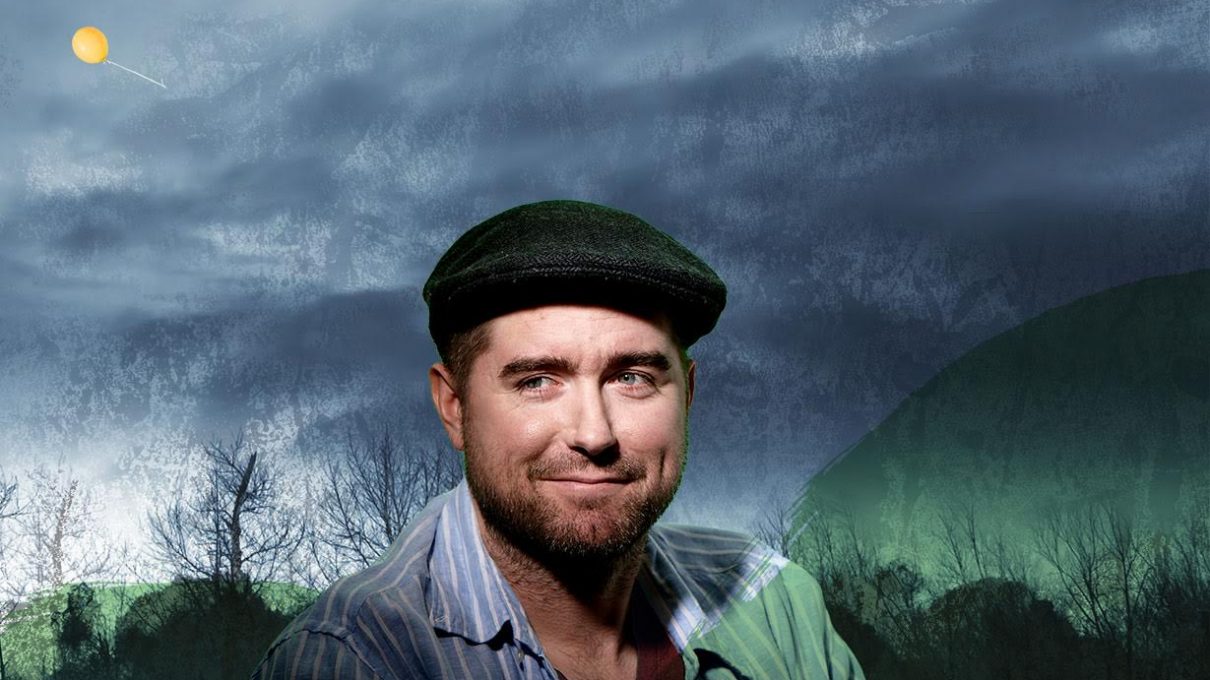 Staring into the shadowed abyss of his audience, Michael Patrick Thornton, sweating under the spotlights, remembers the first time he had a spinal stroke… an event which partially paralyzed him, and helped make his theater what it is today.

“When I got sick, my parents would have lost their house if not for my actors’ union insurance. My father, who was a policeman couldn’t believe it.” Michael breaks into an imitation of his father’s thick Northwest-side Chicago accent. “Oh, they’re picking up the bills? Wow, my son really is an actor.” The audience laughs.

Michael, co-founder of The Gift theater, is an acclaimed actor and artistic director, but running a successful, profitable theater lauded for the quality of its acting and productions is far from his end game. He sees theater as humanitarian missionary work, promoting the guiding principle that keeps him on the stage: if not of the religious sort, certainly of the humanitarian. His main guiding principle in his work is simply: love. And that love is something Michael isn’t entirely sure he would be able to express in the same way if he’d never gotten sick. 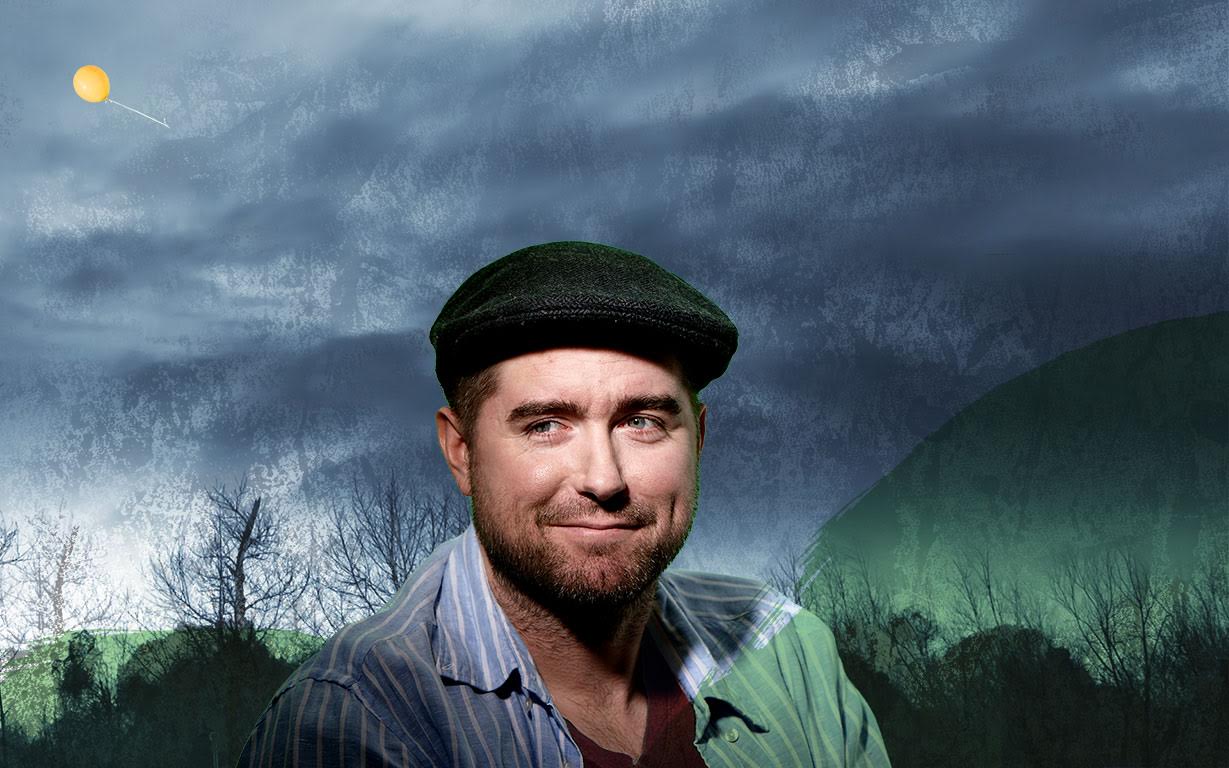 With the double dimples and the heavy-brow-big-blue-eyes combo of a rom-com protagonist, Michael exudes confidence, even as he sits in his wheelchair at the end of a panel of fellow theater owners. Tonight, Michael is speaking on a panel for directors of small “equity” theaters, or theaters that hire unionized actors. “Going equity” is hard for small theaters because it means paying actors more. His audience tonight is actors and directors who are interested in potentially going equity, but even among his fellow actors, Michael keeps his audience laughing, even when discussing boring details like health insurance.

When the panel ends, audience members approach Michael to talk. He tells one man to open a theater, but to be “extremely intentional” about where he was going to place it. “We spend a lot of time thinking about what art we’re going to make as opposed to why we’re making it in the first place,” he said later. “I’m most proud that The Gift has honored and reawoken the imaginations of a lot of people in a neighborhood that a lot of people gave up on.”

Actually, The Gift’s contributions to Jefferson Park—the neighborhood Michael grew up in, and eventually decided to locate his theater in despite it being what he calls a “there be monsters” neighborhood— go beyond imagination, ranging from intensive apprenticeships for high schoolers to sponsorship of the local little league team. Michael believes the arts have been “playing for far too long to the affluent”, and that society disservices itself by failing to provide poor neighborhoods with spaces for art and expression. The “anxiety and perverse anger from the lower-middle class against the arts” he believe boil out of a “vague sense of being abandoned.” Indeed, excellence is only the means; Michael sees theater as a “tool to democratize the consumption of art.”

During his panel, Michael explained that while going equity required endless financial planning and fundraising, he learned to treat it as a form of creative expression.  The Gift’s main operating principle is love, and going equity, after having his and his parents’ lives saved by his own unionized actor’s insurance, seemed like the only way to enact this principle.

The principle of love goes back to an experience Michael had while getting sick, which he likened to the Buddhist idea of “satori” in which the false world opens up to expose the real world. Just before slipping out of consciousness and into a coma he muttered, “there’s only love.” He says he still doesn’t understand what it means entirely, but it was what lead to the founding idea of The Gift: “What if we, as actors, chose to love and never give up on each other?” 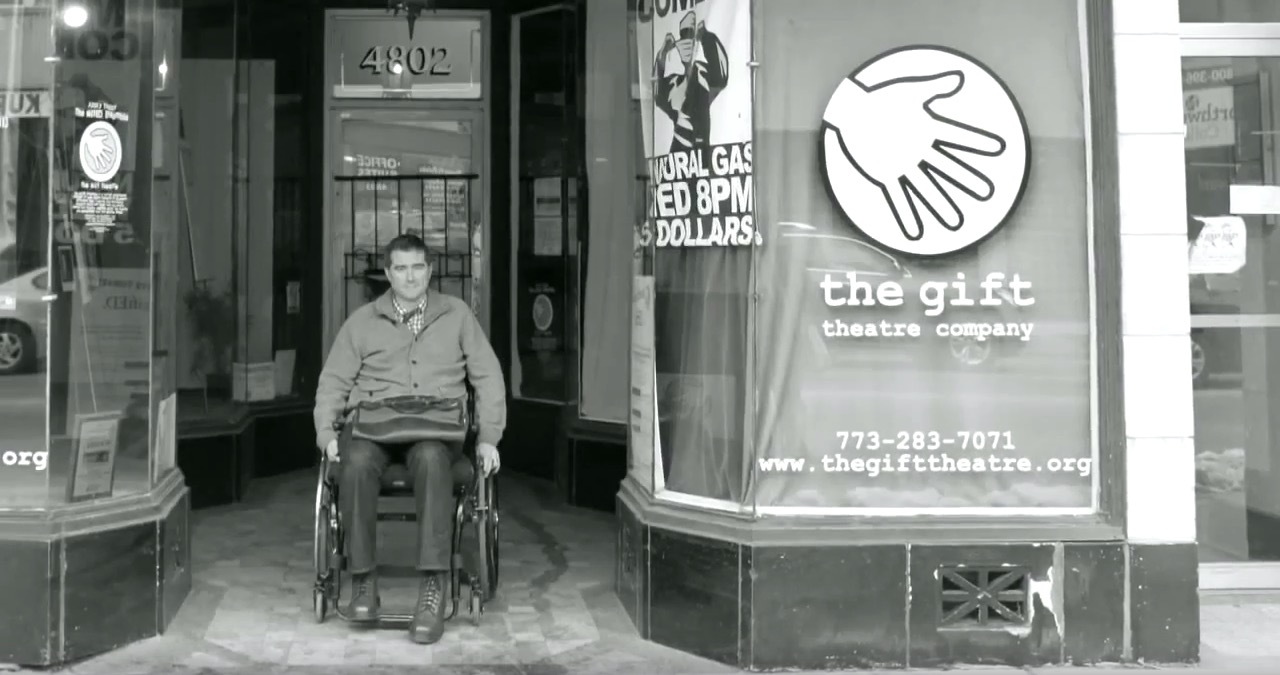 Michael in front of The Gift.

Although The Gift’s first production was way back in 2001, the theater still operates true to its original model. Michael’s ensemble regularly trains together in disciplines they’re unfamiliar with; recent visiting teachers have been a clown and movement expert. The practice cultivates vulnerability and trust–necessary ingredients cultivate what Michael describes a “willingness to look foolish.” Off-stage ensemble building, he says, is what allows his actors to go to emotionally demanding places together.

To choose The Gift’s current program, Michael asks his ensemble if there’s an existing play that can serve as a “Trojan horse” for “what we are feeling right now as humans on the planet.” By staging plays that address what might be considered America’s psychic wounds, Michael believes that theater can help heal them.

The actor would know. Theater was what helped him pull through when he had his first spinal stroke in 2003, two years after starting The Gift at 23-years-old. Michael came out of this initial stroke damaged, but still with use of his limbs. That didn’t last. Ten days later, he would have a second stroke, which left him unable to walk; it also took most of the dexterity in his left arm and hand.

After leaving the ICU, Michael spent about 5 months in an inpatient care ward for children, since the adult ward was full. He says the kids saved his life, because while the adults were acting like their lives were over, the kids could still play. It inspired him. It was no time at all before Michael had returned to work, holding auditions inside the inpatient facility itself, while consuming play after play, looking for his next production.

But while Michael tried not to let his new reality get him down, there were still psychic wounds to deal with. One of the most difficult aspects of dealing with his strokes  was that while doctors could assure him that he hadn’t caused them, they couldn’t tell him what had.“ We are creatures that need narratives, contextualization,” Michael says. “Especially when traumatic, black-swan events happen.”

Consequently, Michael began to have regular panic attacks… attacks which exhibited the same symptoms as his strokes. This created a feedback loop of terror. Any small pain would make Michael think he was having another stroke, which would set off a stroke-mimicking panic attack.  “It was only until I stopped caring about the narrative that it went away,” he says.

It was theater’s Trojan-horse outlet to heal psychic wounds that finally allowed Michael to move on. At his “most fragile” point, Michael was playing Judas in the play Last Days of Judas Iscariot by Stephen Guirgis. In the play, there’s a scenew here Judas is frozen in a catatonic state, believing he’s in hell. He asks Jesus, “why didn’t you make me good enough so that you can love me?” It gave Michael the chance to ask the question he had never allowed himself to ask in life: “Why?”

The safe outlet to ask that question in the context of the play “was huge.” He stopped having panic attacks. Michael hadn’t allowed himself to ask why because he knew “it was just a hamster wheel; there’s no answer.” He states, slowly, deliberately: “And if you have one, it’s bullshit, because you’re choosing one story over another, and I can think of nothing more arrogant than to presume you know why something happened.”

Instead, he says, “there’s a tremendous value in choosing to live in a state of unknowing.” The deepest creative capacities, he insists, can only be reached during improvisation. Ultimately, Michael’s life philosophy is just what he told the theaters considering going equity. “Take the leap, then build the plane in flight.”

Elizabeth Limbach
Do you know someone else who would enjoy this story?
You might also like...
From AIDS to Zika, New Books Teach Kids About Conditions
Susan Johnston Taylor
Drawing Out The Weirdness

How To Help A Loved One With Dementia
Don’t miss one more amazing story.
Every week, we’ll send a few of our favorite stories to inspire you.
Send this to a friend
Scroll to top