By Wheel, By Stick, By Crutch: Making The World’s Wonders Accessible To All

Everyone will eventually be disabled, which is why Wheel The World is making parks and trails around the world accessible to all.
accessibilityblindspinal cord injuries 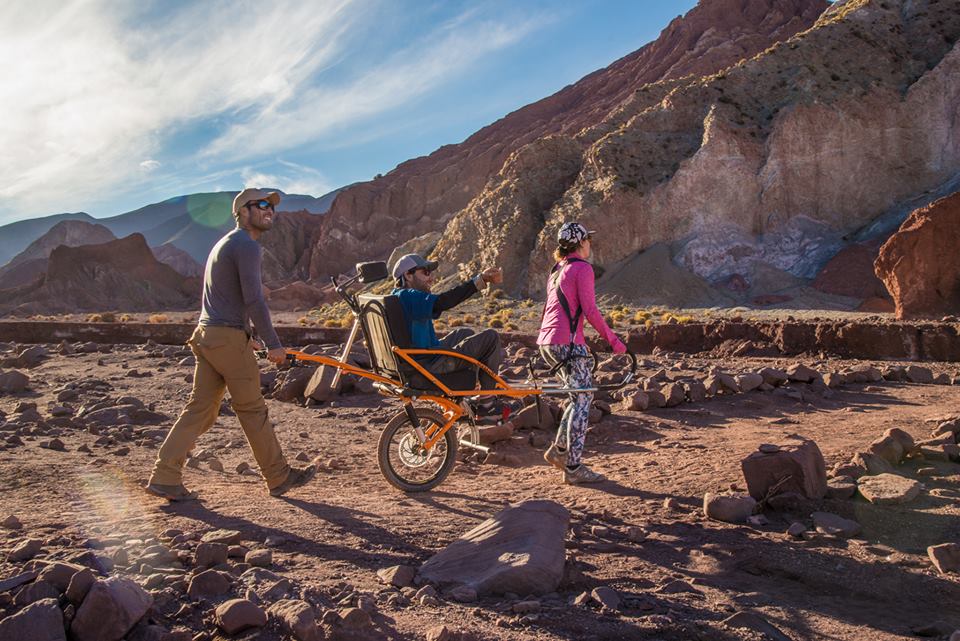 Even this rocky landscape is accessible with the right equipment.

One day in 2017, while finishing business school at UC Berkeley, Alvaro Silberstein was chatting with his longtime friend Camilo Navarro. Camilo suggested that the two take a 5-day trek through the Torres del Paine National Park in Chile, their home country.

It was a trek that Alvaro–who has used a wheelchair since he was 18, due to a spinal cord injury–had always wanted to make. “It sounded amazing but also maybe impossible,” he remembers.

To assess the challenge, they called the National Park authorities and local travel services asking about wheelchair accessibility. But no one could tell them anything. If it had been done before in a wheelchair, no one could tell them about it. So, Camilo and Alvaro decided that they would not just hike the trail, they would blaze it– at least from a wheelchair accessibility perspective. 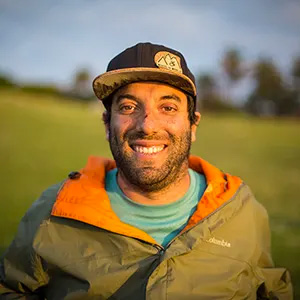 Alvaro Silberstein, co-founder and CEO of Wheel The World.

A mere 26 months later, and Alvaro and Camilo run Wheel the World, which offers tours in the US, Peru, Tanzania, Brazil, Costa Rica, Chile, and Mexico that are accessible to people with a growing range of disabilities. They plan to “open” ten more destinations this year, and hope to eventually offer tours to thousands of locations. Their goal is to enable millions of people with disabilities to “explore the world without limits” by visiting national parks, heritage sites, and other destinations that have been historically tricky or impossible for disabled people to enjoy.

But that’s not all. Not only does Wheel the World offer packages for disabled tourists, they also train local services in accessibility. They also partner with different sponsors for specialized equipment like adaptive bikes and wheelchairs, which they leave on site for future use by anyone who needs it.

Folks caught up with Alvaro Silberstein to talk about how Wheel the World works, and where it’s headed.

How did the original trip turn into you and Camilo creating a company together?

At the time, I was working for a startup in the Bay Area that developed futuristic wheelchairs–so I knew about the new technology and new equipment being created. I found a special hiking wheelchair but it cost $8,000 and that was prohibitive. Even the shippings costs to rent it would have been too much. So we decided to turn the trip into a project with the objective of making this specific trek accessible for wheelchairs. We decided that we would leave the equipment there and train local travel services to repeat the trek for others. We funded the project on Kickstarter.

It was such a cool feeling to be in a place that, since my injury, I thought was no longer for me.

I always loved being in nature and traveling but there was a lot that I thought was just impossible for so long. It was crazy! It was such a cool feeling to be in a place that, since my injury, I thought was no longer for me. I think it was also really cool for the operators, tour guides, and travel services because they were all super excited to see someone in a wheelchair doing it. We all figured out how to make the transport and accommodations accessible together as we went.

We also filmed the entire adventure and made a video that went viral. We started to receive a lot of requests from people with disabilities and people that wanted to help their friends or family members do the same thing. We started organizing the trip for other people, just because we wanted to make an impact around our initial idea. But then we got really excited and we thought, “why don’t we replicate this in other places?” We were able to get sponsors for the second trip which was to Easter Island. They provided special wheelchairs for volcanoes, adaptive bikes, and even adaptive scuba equipment. It went from there.

We started off trailblazing, but we realized there is a lot of accessible travel out there and that’s when we started also partnering with local accessible businesses and services. 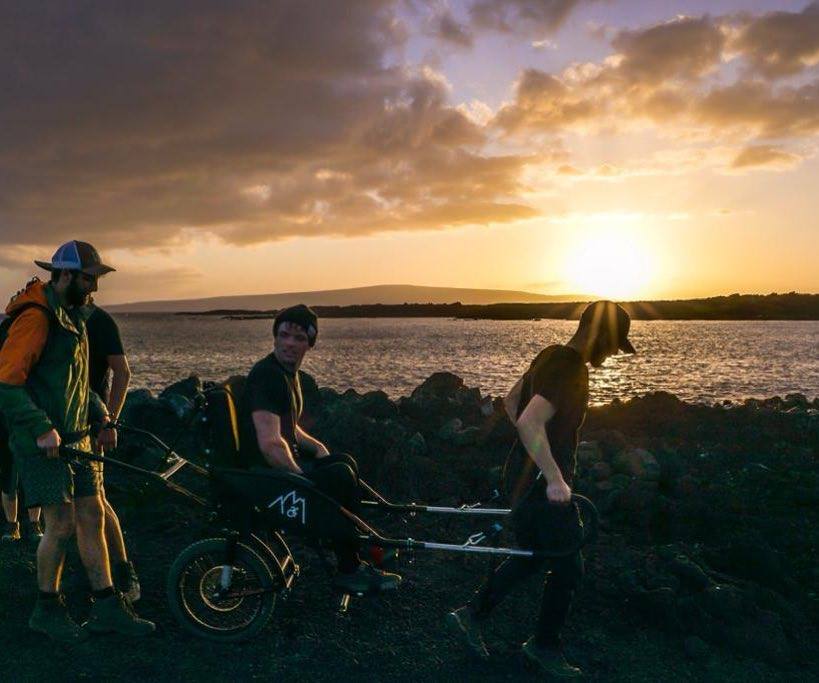 There’s no where that isn’t accessible when you have the right equipment and friends. Which is where Wheel the World comes in.

From what I understand, part of making these locations accessible is that you get the special equipment sponsored and then leave it with local services. So can anyone who visits there use them?

Adaptive equipment is super expensive in general. Most people aren’t going to buy an $8,000 wheelchair to use once a year. In the US people are used to equipment being funded by insurance or medicare but that’s not the case in other places. So we leave the equipment in the locations and train local services to manage and use the equipment. Depending on the equipment and the location, people might need to purchase services to use them, but that’s how we protect the equipment handle safety concerns. We want to make sure people know how to use it. So far, equipment we’ve left in different places has been used over 500 times.

Most people aren’t going to buy an $8,000 wheelchair to use once a year… So we leave the equipment in the locations and train local services to manage and use the equipment.

How do the special chairs work for hiking?

The hiking chair works in a team of three people. It’s designed so that the pushing motion of the person behind you is very natural. The person in front of you has a harness where a backpack would go. Those two people walk in a synchronized way. For the person in the wheelchair, or at least for me, it can take a little get used to. I was used to pushing myself. But at the end of the day it’s impossible to get to these places otherwise, and I think that’s something that other people on our trips have realized too. Once you’re used to it, it’s actually a fun group activity. It’s teamwork. You have to communicate all the time. 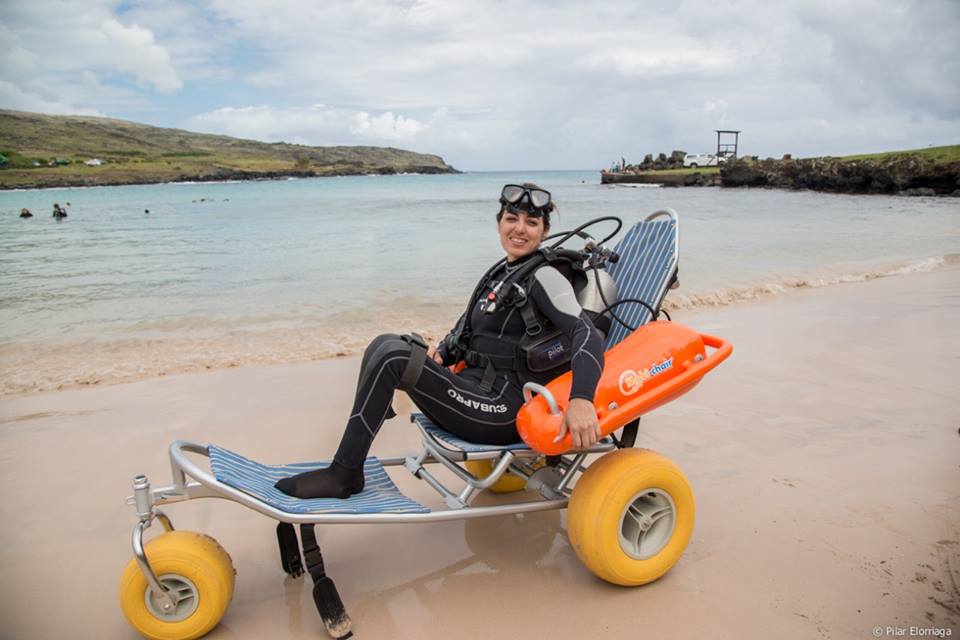 Wheel the World wants to make any adventure you can imagine accessible, like scuba diving.

What about the special bikes? Are there different kinds for different disabilities?

Yes! Once we went to the Atacama Desert with a blind person to understand their experience. We went with a tandem bike for him, but in the middle of the trip, it got a flat. I was using a bike that I crank with my hands–it’s great for me. We have another bike called a recumbent that’s meant for people with balance or back problems where you lean back and crank with your legs. We ended up combining those bikes so that I was the eyes, and he was the legs. He was a lot stronger than me, so we could go a lot faster. Now we use this type of bike for bike trips with blind people.

What have been the most challenging trips to design?

Definitely the Inca Trail! I went to Cusco when I was 17, right before my accident. I took the train to Machu Picchu but there was a protest on the train, so we only got to stay for about half an hour. I was sad, but I didn’t care that much because I thought, “of course I’ll come back here and I’ll do the Inca Trail.” After my accident, I just thought I never would. But since the project started, I’d wanted to try it. We underestimated how hard it would be. It was intense, and even a little bit risky. That’s why we’re not offering it as a tour. That was the first time we realized that something was just a little bit too much. We’re still offering tours of Machu Picchu, just not the trail. 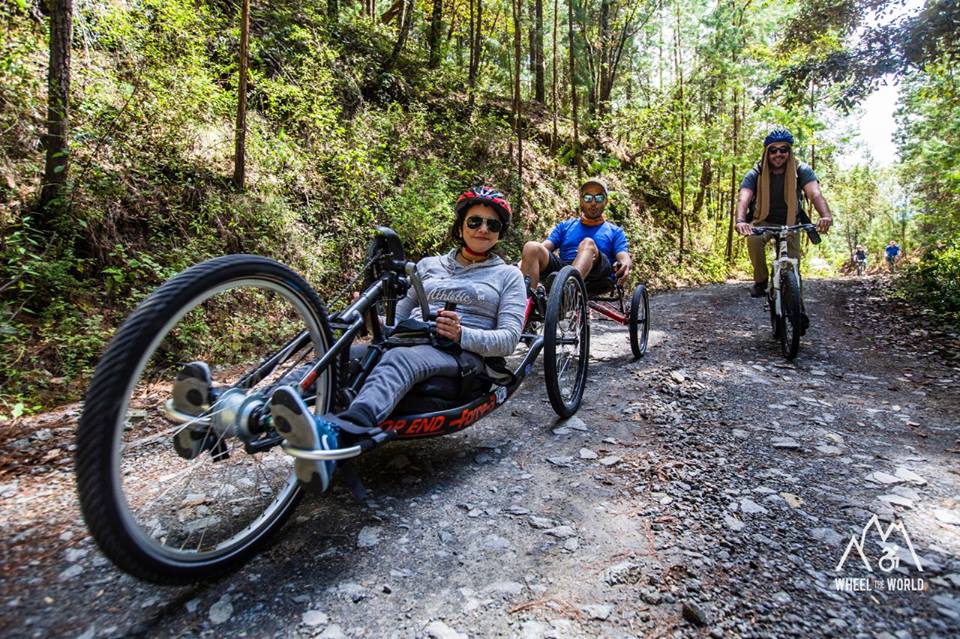 Tandem cycling is one of the many options Wheel the World offers.

What kind of disabilities do you design trips for?

We started for an obvious reason with wheelchair users. Now we work with many types of people that have various types of disabilities like blindness, Cerebral Palsy, and cognitive disabilities. But really, anyone up for a cool adventure– it doesn’t matter if we already offer it– can reach out to us! We know some disabilities more than others but we’re open to learn how to accommodate anyone. We have a physical therapist on the team that looks at special requirements to figure out if we can address them.

People think of disability as something separate from themselves, but actually, disability is the only minority group to which everyone will eventually belong.

We want to work more with seniors. I’ve been trying to convince my grandma to come trek with me in Torres del Paine. Our communications are very…millennial. But, we’re realizing that there are so many seniors that can walk, just not that much, that would benefit from our services. People think of disability as something separate from themselves, but actually, disability is the only minority group to which everyone will eventually belong.

Renee Brincks
Do you know someone else who would enjoy this story?
You might also like...
Inseparable
Fiona Tapp
Confessions Of A Recovering Superwoman

Why I Lied To Friends About My Chronic Pain
Don’t miss one more amazing story.
Every week, we’ll send a few of our favorite stories to inspire you.
Send this to a friend
Scroll to top