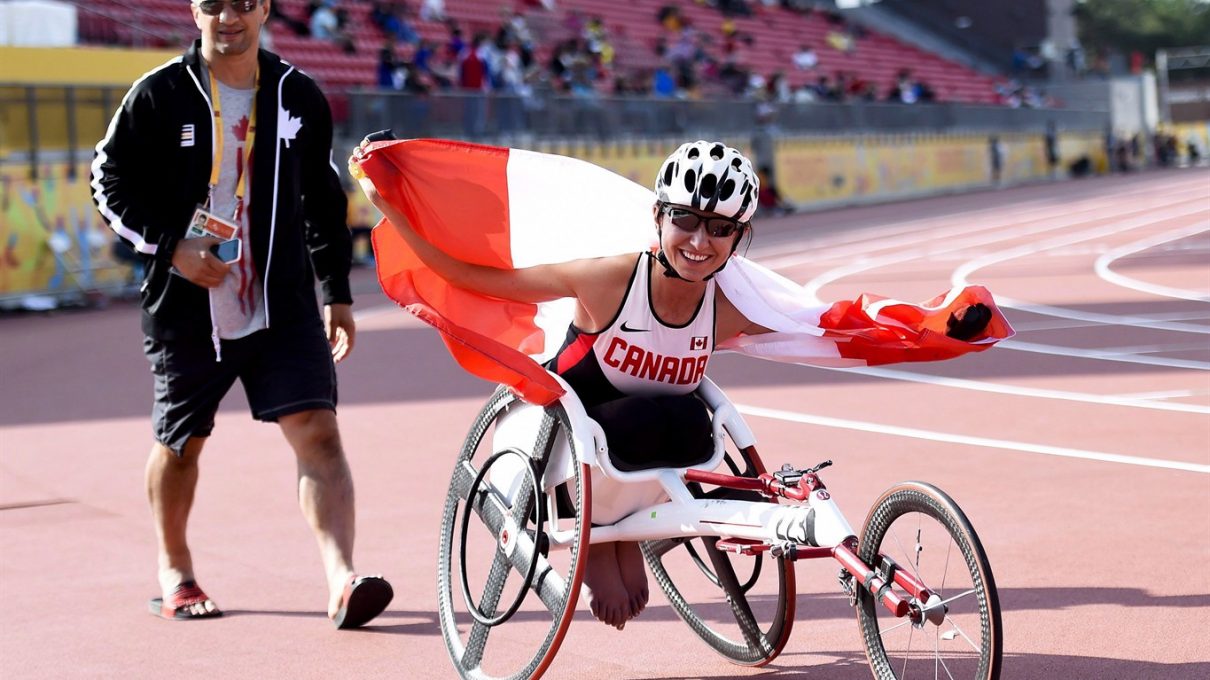 To keep up with Michelle Stilwell, you’ve got to love long days. Witness the Canadian wheelchair racing superstar’s training routine leading up to the 2016 Summer Paralympics in Rio. She built it around her demanding job as British Columbia’s Minister of Social Development and Social Innovation – while also raising her autistic teenage son Kai.

“I got up at 5:30 in the morning and trained from 6 to 8:30 in my race chair. Then I showered, headed to work and put in a full 10-to-12-hour day. Being a cabinet minister is somewhat crazy on a good day! In the evening, if I had the energy or extra time, I’d put my second workout in, usually yoga, weights, or swimming.” 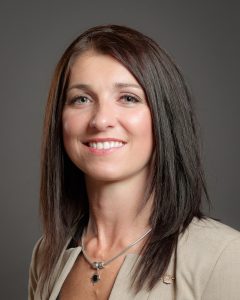 The Vancouver Island resident’s intense commitment paid off with gold medals in the women’s 100-meter and 400-meter races at her fourth Paralympics. And even though Stilwell, 43, retired from competition in 2017 as a six-time Paralympic champion, her relentless pursuit of excellence and ability to embrace change continues to define her, from politics to her personal life.

Born in Winnipeg, Stilwell was a sports junkie from the get-go. Blessed with a warm personality and ready laugh, she flung herself into track and basketball in the Manitoba capital. However, at age 17, she broke her neck during a piggyback ride with a friend when she fell backwards on the basement stairs. That spinal cord injury, followed by multiple surgeries, rendered Stilwell an incomplete C7 quadriplegic, operating without full hand and wrist function. Yet she refused to give up on her athletic dreams.

At age 17, she broke her neck during a piggyback ride with a friend when she fell backwards on the basement stairs.

For Stilwell, 1996 was a life-changing year. Inspired by the likes of Canadian decathlete Michael Smith and rising NBA star Steve Nash, she’d cracked the Manitoba provincial wheelchair basketball team, and she travelled to the Atlanta Paralympics to cheer on a friend representing Canada in that sport. “At those opening ceremonies, incredible emotions just came over me. I thought: ‘I want to be able to represent Canada and wear the Maple Leaf.’”

That year, she also met her husband Mark, whose love and support would prove invaluable.

“I met Mark in Montreal at the national basketball championships. He was playing for Team Saskatchewan as an able-bodied player. We discovered his aunt and uncle were best friends with my mom and dad in Winnipeg. It was an instant unity. Five months later we were engaged, and a year later we were married.”

The milestones just kept coming. She won a wheelchair basketball world championship in 1998. After graduating from the University of Calgary with a Bachelor of Science degree in psychology in 1999, Stilwell made the 2000 Paralympic wheelchair basketball team. In Sydney, Canada defeated the host Australians in the final.

“Sydney was an incredible experience because I took that journey with 11 other incredible women. We trained together, we travelled together, we shared that common goal. To compete on the international stage alongside them and make it come to fruition is something I’ll always cherish.”

However, she faced a new challenge after the Games. She was diagnosed with Chiari malformation, a condition where brain tissue extends into the spinal canal. It caused neck pain and eventually required brain surgery. It meant her wheelchair basketball career was over. 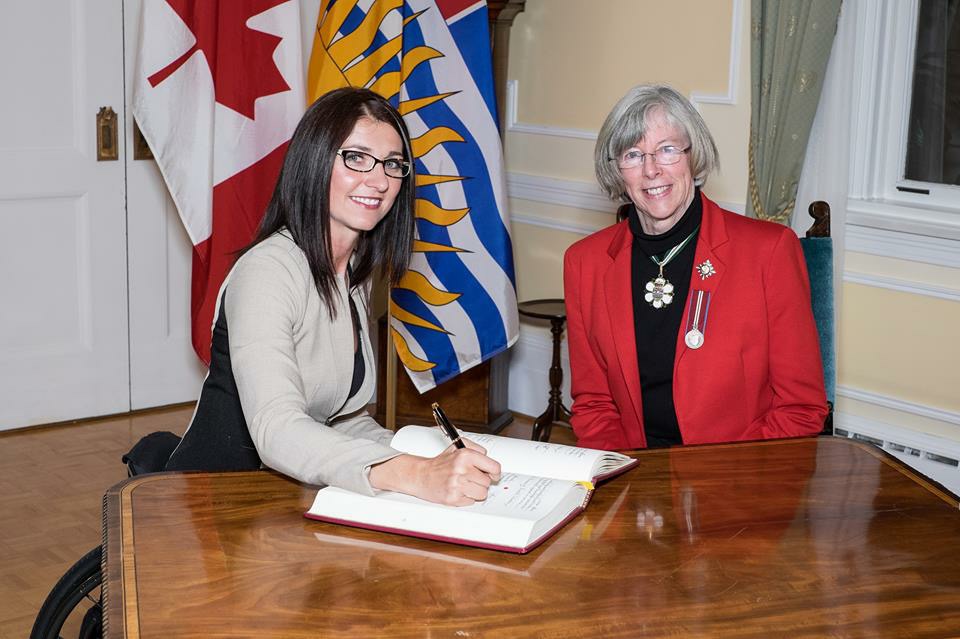 As a politician, Stillwell fights for the rights of Canadians with conditions.

Initially, Stilwell sought solace in family and nature. She gave birth to Kai in 2001 and travelled with Mark to Vancouver Island to introduce their new baby to relatives. The pristine coastal vistas of orca whales and giant Douglas firs captured their imagination.

“While we were driving through Cathedral Grove toward Nanaimo to catch the ferry, it was a sunny October day. We thought: ‘Wow, this place is beautiful. Mountains, rivers, lakes, hiking trails. Wouldn’t it be incredible to live here?’”

Mark, a computer programmer, quickly landed a software job in Parksville, and they moved to their new home. Stilwell thought she’d content herself with coaching athletes, but Victoria-based Paralympic coach Peter Lawless revitalized her ambitions by insisting she’d be perfect for wheelchair racing. Stilwell admits she had a mental block about it at first.

“Track was what I did in high school. If I couldn’t be at a track and running, I never felt like I wanted to go back. So I avoided it. Eventually, Peter won me over and got me into the race chair. And it was almost instantaneous that my competitive drive came back.”

Stillwell and her son, Kai.

The 5-7, 110-pound dynamo’s rise was meteoric. Her first of seven world titles came in the 200-meter race at the 2006 world championship in the T52 category (a disability sport classification). Despite undergoing another spinal cord surgery six months before the 2008 Paralympics, Stilwell returned to training two and a half weeks later, and would win 100-meter and 200-meter gold medals in Beijing. This made her the first Canadian to earn Paralympic gold in two different sports.

Her attention to nutrition grew over the years. A devotee of kale dishes and protein “power balls,” she adopted a raw vegan diet before the 2012 Paralympics in London. “I got the dining hall meal plan so that I knew what was going to be served every day. Then I took food from the dining hall and created my own meals in my room.”

Pumped up by her pre-race song, “I Gotta Feeling” by the Black-Eyed Peas, Stilwell repeated in 2012 as the 200-meter champion and claimed silver in the 100 meters. Were there any new heights left for her to scale?

Stilwell answered that question in 2013 by getting elected as the MLA (Member of the Legislative Assembly) for British Columbia’s Parksville-Qualicum region with the governing Liberal Party. Two years later, she became a provincial cabinet minister. While politics wasn’t her original dream, the chance to promote healthy, active living and employment for people with disabilities was too good to pass up. She also sees parallels between politics and athletics.

“They’re both stressful and require dedication. You can’t do a political job halfway. You have to put the effort in and do the follow-up. That’s the same for athletes.” 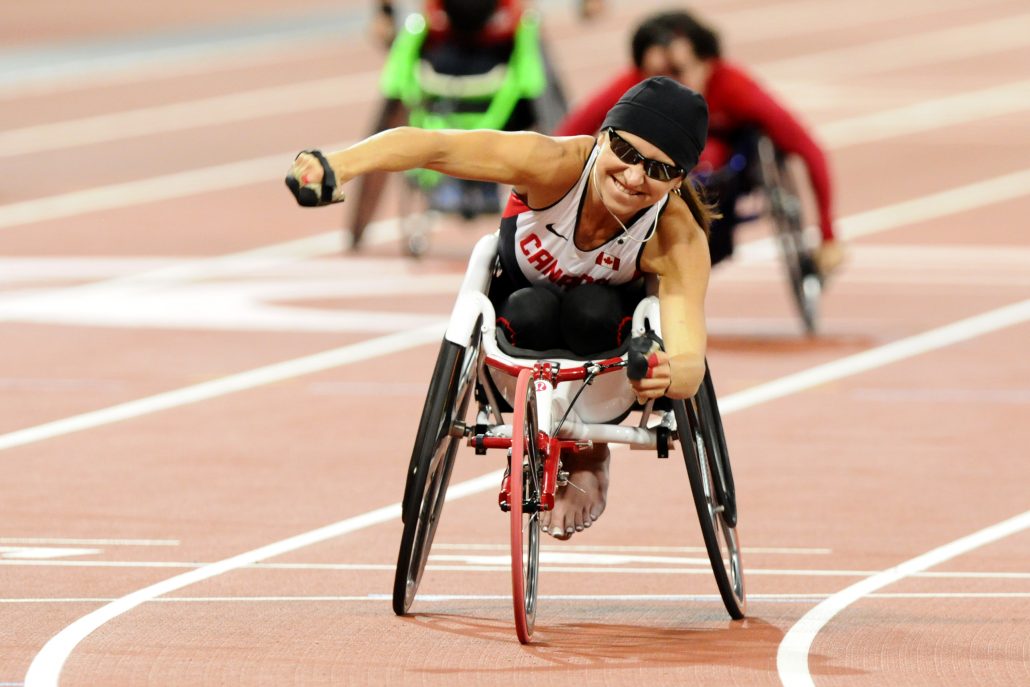 “You can’t do a political job halfway. You have to put the effort in and do the follow-up. That’s the same for athletes.”

Although the Liberals lost the 2017 election, Stilwell retained her seat. She recently celebrated her 20-year anniversary with Mark, and she takes pride in 16-year-old Kai’s progress after years of homeschooling and autism-related challenges.

“He’s now in the eleventh grade. He’s doing really well academically. He’s one step away from a black belt in taekwondo and he’s studying for his driver’s license. I’m mostly proud of his ability to feel more comfortable in his own skin.”

Stilwell has learned a lot from her experiences and from people like fellow British Columbian Rick Hansen, whose globe-circling wheelchair journey inspired the 1985 John Parr hit song “St. Elmo’s Fire (Man in Motion).” Undoubtedly, this Paralympian, politician and parent will keep on rolling.

“If you have a dream and you want to pursue it, you just need to believe that you can find the path to success. Never give up. Take that next step forward, and change happens. The only thing that holds us back is not taking that step.”

Ask Ada: How Do I Ace A Job Interview When I'm Disabled?
Ask Ada
This Super-Smelling Pup Sniffs Out Students’ Stress

Fighting Cystic Fibrosis With A Rumble And A Roar
Don’t miss one more amazing story.
Every week, we’ll send a few of our favorite stories to inspire you.
Send this to a friend
Scroll to top