A battle with ALS isn't stopping renowned indie cartoonist Patrick Dean. He's using his work to attack systemic inequality and racism while he still can.
als 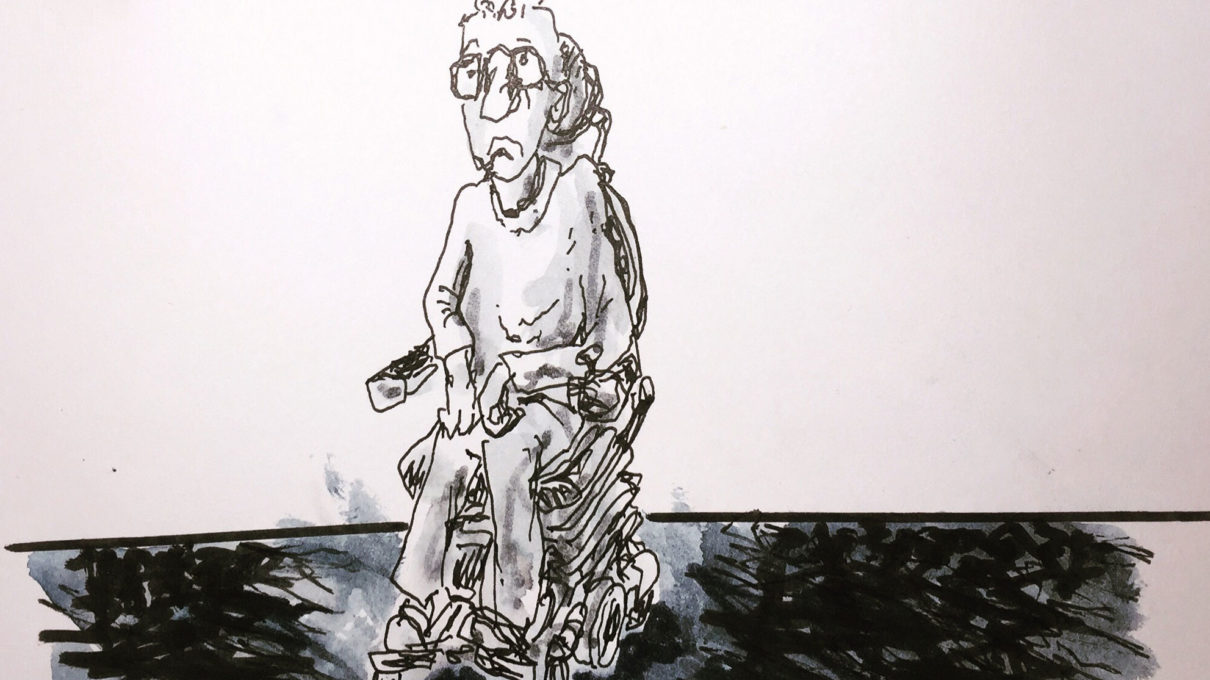 “There’s something strange about his work,” says his publisher, J.T. Yost. “It’s slightly surreal, but not so surreal that it doesn’t make sense. There is a magic realism about it.”

Dean, 44, a cartoonist of regional renown in his native Georgia, is gaining wider visibility. This fall, his graphic novel “Eddie’s Week”  will be published by Birdcage Bottom Books. He also posts regular drawings and cartoons on Instagram.

A cartoonist since his days as a student at the University of Georgia’s Lamar Dodd School of Art, Dean, a tall lanky man, had a regular strip in Flagpole, the alternative newspaper of his adopted hometown of Athens, the city that helped launch the punk rock and new wave music movements. Since 2002, he and his friend Robert Newsome have been running Fluke, a mini-comic festival, at the music venue 40 Watt Club, the main performance space for R.E.M., Widespread Panic and other bands.

This spring, Dean’s work was the subject of a small retrospective at the Georgia Museum of Art. But Dean’s growing exposure happens at a particularly tumultuous time in his life. In 2018, Dean was diagnosed with bulbar onset amyotrophic lateral sclerosis (ALS) in June 2018 and his physical decline has been steady. He no longer can speak. He uses a wheelchair and moves parts of his body with great difficulty.

“But he can still draw,” says Eleanor Davis, a cartoonist and illustrator who regularly appears in The New York Times and has known Dean for 16 years. “He’s unstoppable.”

Since his diagnosis, Dean’s work has focused on politics, illness and mortality.  We spoke to Dean to learn more about his approach to art and politics, his battle with ALS, and the importance of cartooning in a burning world. This conversation has been edited for publication.

Could you tell us a little bit about how you came to your diagnosis, and how you’ve come to terms with it?

About a year before the official diagnosis I’d been having speech issues that I’d attributed to something treatable because I felt relatively healthy aside from those speech issues. Certain words were hard to pronounce and my voice was nasally and low. I saw an allergist who said I had a sinus infection after an MRI, but after I cleared the gross junk in my sinuses I still had speech problems. Then I was sent to an ENT who noticed my nasal muscles weren’t moving and said I had something neuromuscular.

I’m surprised it’s added an unexpected fearless streak in me. What have I got to lose?

My wife and I were terrified. Next a neurologist examined me and suspected ALS. Another MRI and lab work ruled out treatable possibilities and a nerve conductive test that involved needles stuck in my body from head to toe supported the diagnosis. We were referred to an expert in Augusta, Georgia, who repeated the test with the damn needles and confirmed it was bulbar onset ALS.

With a terminal illness, what choice do I have but come to terms with it at lightning speed and try to make the most of the time I had left? I’m married to someone I love and was looking forward to growing old with her but that’s cut short. I have two wonderful children that I’m probably not going to live long enough to see graduate high school. I’m certainly bitter about that aspect but I’m surprised it’s added an unexpected fearless streak in me. What have I got to lose?

How has your condition affected your work, both from a logistical and philosophical perspective?

I’ve had to say goodbye to the control I once had with my fine motor skills going off the rails. To draw anything these days requires my family setting the sketchbook out and putting the pen in my hand and switching to different markers. What used to take me a half hour to draw now takes hours, but I have to keep reminding myself that it’s better than nothing. My looser lines and chicken scratch handwriting certainly captures how I’m feeling. I’ll keep drawing until I can’t.

Much of your recent work has voiced your outrage about issues such as police brutality and COVID-19. Why are these issues so personal to you?

It’s been a nightmare watching the world burn right as I prepare to split. I figure with my time running out I don’t want anyone to think I was complacent with these injustices going on. I don’t have a future to make a difference later on so I’m speaking out now with pen and paper from my wheelchair. People in power have made terrible selfish decisions about the pandemic that have directly affected my family and my own health and their incompetence makes me furious. And if someone isn’t outraged by the amount of unarmed black people being murdered by the police in broad daylight, what does that say about them? I don’t want to exit this world on the wrong side of history. If I die angry then so be it.

I don’t want to exit this world on the wrong side of history. If I die angry then so be it.

What would you like your art to accomplish at this moment?

Stuck in a wheelchair, I’m trying to do everything I can to condemn racism, police brutality and crooked politicians, but it’s frustrating because under different circumstances I’d be doing more. (My wife and I) debated attending the march but two things kept me at home.

A crowd that size would be ripe for contracting COVID-19 even with me wearing a mask and taking precautions. I was almost ready to risk it to show my solidarity, but the second reason was what kept me home. Georgia Gov. Brian Kemp calling in the National Guard on June 1 to Athens was a concern because in the prior days across the country we saw them using tear gas during protests.

For a healthy, able-bodied person tear gas at best can attack the respiratory system in a severe way, but usually not deadly. With my bulbar onset ALS already throwing a wrench into my breathing, tear gas being launched into a crowd would kill me. I thought I was being paranoid but I didn’t have any faith in law enforcement keeping a cool head. I watched a live stream from home and was delighted to see the Athens march was fairly incident free. Just as I felt relief, it would be later that night when the National Guard blocked off downtown and the local police tear gassed the remaining protesters who set up a vigil.

In the following days I’ve done what I can from home by donating to bail funds and such and keeping aware of the news. This horror movie of reality certainly inspires me to create artwork in response to these atrocities, but if I stop there then I’m just promoting myself.

I want to draw attention to the terrible events around us while I still can. My health is continuing to decline with ALS doing its job, but I can’t rest on the sidelines as the world falls apart.

My health is continuing to decline with ALS doing its job, but I can’t rest on the sidelines as the world falls apart.

What is it about the political response to COVID-19 that angers you?

I’ve been appalled by every terrible decision this crooked administration has made since day one, from tax cuts for the rich to putting kids in cages, but the response to this pandemic has been way more inept and deadly than I could ever imagine. The willful blind eye to health experts and warnings is criminally negligent and has cost us lives.

I initially did the “We Won’t Die for the Dow” drawing when politicians and commentators on the right suggested it would be wise to open businesses again and forget this staying home baloney because it would help the economy.

Would it kill a lot of people? Sure, but think of the economy! After I posted it online I was surprised at the attention it got. Most of the responses were supportive but others on the right thought I was overblowing the subject and being dramatic.

The “Sitting Duck” drawing came about from dreading that not enough people were taking this pandemic seriously on a local level. Living through this is stressful enough but having ALS and being wheelchair bound definitely made me realize I’m at the mercy of everyone being cautious or not. I wondered how long it would be until we knew someone personally to be struck down by this virus. My wife’s uncle passed away from it last week and it drove home how it can affect anyone since he followed every safety precaution he could.

How has this pandemic changed your life?

Life was already hectic enough with my family taking care of me in addition to the person we hired twenty hours a week to help me. The caretakers of someone with ALS have a full time job and I have my good days and bad days. When this pandemic began we couldn’t risk outside caregivers in the house so it’s all on my family now. With school being out my kids are restless and miss their friends. Our world has shrunk and we see no end in sight.

What is challenging about making art right now? Physically and psychically?

Getting settled in to draw something requires assistance from my family; I need someone to turn the sketchbook to a new page, take the cap off the marker and place it in my hand in a specific way that I can grip it. With my hands weakening I’ve had to adapt to the decline and figure out new ways to draw. Drawings that used to take half an hour now take several hours, but drawing anything is better than nothing. I’m determined to not make every drawing my last because I know eventually I won’t be able to hold a pen at all.

Drawings that used to take half an hour now take several hours, but drawing anything is better than nothing.

What is it about creating comic art that satisfies you and keeps you going?

It has been an economic way to tell a story with visuals or conveying a message. All one needs is a pen or pencil and paper. Whether you’re running copies off at a xerox shop or putting it straight to the internet it’s a great way to get your work out there with or without a publisher.

When I was diagnosed a few years ago I was frustrated that I still had so much I wanted to create and ideas to express but didn’t know how much time I had left to live. Living with this disease has added a sense of urgency to everything I do. When I have the energy I have to draw or I get antsy. Onwards until I die.

Meghan Beaudry
Do you know someone else who would enjoy this story?
You might also like...
The Cyborg With Lou Gehrig's
Josh Andrew
Ask Ada: My Friend Has Been Lying About Exposing Us To Coronavirus

I Think I Know One Thing Naya Rivera Went Through
Don’t miss one more amazing story.
Every week, we’ll send a few of our favorite stories to inspire you.
Send this to a friend
Scroll to top