The Celiac Chef With Grease In Her Bones 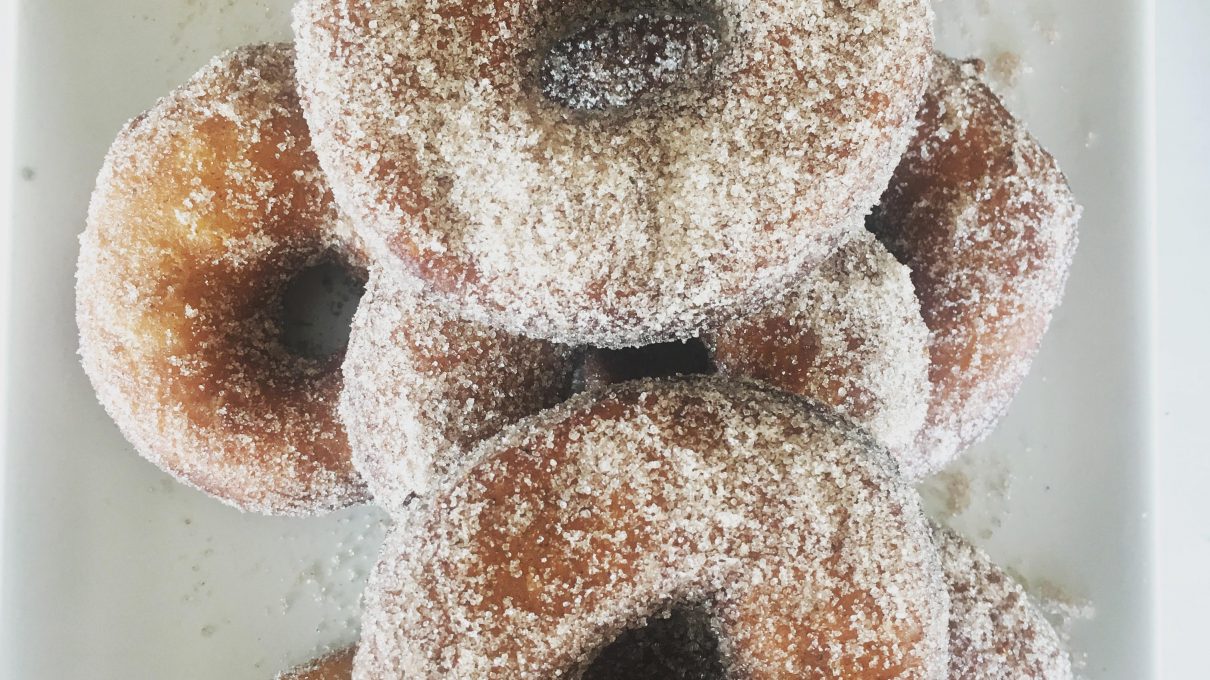 The only building on a block that feels more like a small traffic island, Oakland’s Grease Box restaurant is both unassuming and unexpected. The surrounding neighborhood has seen better days. Tall weeds grow out of cracks in the sidewalk and metal bars line most of the nearby windows. But what’s being made inside this little blue and white joint is nothing short of a minor miracle for those like me and chef-owner Lizzy Boelter, who have celiac disease, an immune response to eating gluten, a protein found in wheat and other grains. Here, gluten-intolerant diners can order juicy grass-fed burgers without having to forgo the bun, crispy fried chicken and waffles, giant strawberry muffins, chocolate chip cookies, cinnamon sugar donuts, fresh baked baguettes with butter, as well as juices made with locally-sourced kale, beets, and ginger (this is California after all).

Grease Box’s interior has the warm, welcoming vibe of a country store. A narrow wooden bench painted robin’s egg blue serves as a seat at one of the five indoor tables. Patrons sink into long, low booths at a few of the others. Large jars of sun tea steep on the windowsill next to a plastic rooster and two owl knickknacks. Wild flowers are collected in ceramic vases. On most days, Boelter can be found hunkered over her bubbling skillet or hidden in the back baking rows of muffins and bread. Often dressed in a tank top, her brown hair piled on top of her head in a poof of curls, Boelter’s casual attire reflects the restaurant’s relaxed atmosphere. A tattoo of a fork and the word “savory” on one arm further underscores the point. “I don’t care about the reclaimed wood, and the succulents, and the Edison bulbs and stuff. The food is it,” says Boelter. “We’re divey, because the food is awesome.”

Increased awareness of food allergies along with gluten- and grain-free diet trends have led to a major increase in gluten-free dining and grocery store options in the last ten years. But, thanks in large part to Boelter’s cast iron skillet and the fried goodness that comes out of it, what Grease Box is doing still feels special. This is the kind of place where you can eat gluten-free without feeling like you’re being limited to a special diet, or a sad ersatz version of what you really want to indulge in.

Born in Texas and raised in southern Louisiana, Boelter has grease in her bones. She watched her mom, who she describes as a “domestic goddess,” master just about every traditional Southern recipe in their home kitchen. “I grew up doing whatever she did,” she says. “Pretty much all we ate were fried things—fried chicken, fried shrimp po’ boys, fried catfish. Everything was fried.” When she was ready to open her own restaurant, she wanted the menu to reflect those roots along with her commitment to sustainable produce and farmers markets. “There were gluten free bakeries and there were local, organic restaurants and never the twain shall meet,” she says. “There weren’t people doing the types of food that I wanted to eat.”

Born in Texas and raised in southern Louisiana, Boelter has grease in her bones.

Grease Box pulls together a number of threads, and one potential knot, in Boelter’s life. In college, she studied art because she wanted to create things for people to enjoy, but she was frustrated by how the dominant conceptual art trends shut out many viewers. After graduation, she spent years working at a wide variety of restaurants and cafes, and realized that food offered a path to do what she had hoped to accomplish with art—make something nourishing and beautiful that everyone could understand. And then, of course, there was her celiac diagnosis.

While tagging along with a musician friend on tour in 2008, Boelter went to a holistic doctor in Portland who suggested that she was allergic to gluten. According to the Mayo Clinic, “if you have celiac disease, eating gluten triggers an immune response in your small intestine … the intestinal damage can cause weight loss, bloating, and sometimes diarrhea. Eventually, your brain, nervous system, bones, liver, and other organs can be deprived of vital nourishment.”

No sad salads for the Celiacs who dine at Oakland’s Grease Box restaurant.

By the time Boelter saw the doctor in Portland, she had already made many hospital visits for various digestive issues, chronic migraines, and joint pain, and she battled depression and anxiety, too. She had experimented with eliminating different foods to try and solve her stomach pain, but nothing had worked. “Then I just stopped eating gluten, and literally every medical problem that I’d ever had went away,” she says.

For someone with such a strong love for fried foods, a diagnosis of celiac disease might seem devastating. Not for Boelter. After so many years of being sick, she was relieved to finally nail the culprit. “I was like, ‘Oh my god, when I eat, it doesn’t hurt afterwards.’ Since I’d had it forever, I thought that was normal. I didn’t realize that that’s not how life felt.”

Boelter’s biggest disappointment came when she tried to eat out. From the ubiquity of breadcrumbs, to the problem of shared grills for pancakes and eggs, to french fries fried in the same oil as onion rings, restaurants became a minefield. “I’m not a super demanding customer. Just give me a salad—I don’t care. Just don’t make me sick,” she says. “But people don’t care, or they think that it’s stupid, or that you’re making it up. … That to me is the devastating part. People won’t accommodate you. They just won’t.” Even when she worked at Pizzaiolo, a beloved high-end pizzeria, only two cooks would make her “pizza no pizza” invention (pizza toppings and cheese baked in a cazuela), and only if she begged them to.

“That is the reason that I started Grease Box,” says Boelter. First, she took her campaign to the streets. While still working at Pizzaiolo and its sister pizzeria, Boot & Shoe Service, she began hauling a giant butcher block on a cart with two propane burners to art fairs and food markets. “I just fried stuff in a skillet on the street,” she says. “That was ridiculous. I can’t believe I got away with that.”

The response was overwhelming. Non-gluten-free folks lined up in droves as well, sometimes waiting more than an hour for a plate of perfectly crispy golden brown chicken with meat so tender on the inside that the juice would run down their hands.

After two and half years of managing the food cart business on the side, Boelter took a leap and opened a permanent spot with her now wife Hae Yong. Having mastered fried chicken, she soon faced a bigger challenge: bread. At the cart, Boelter served socca, a chickpea flour flatbread. And she served muffins, scones, and other baked treats from the beginning at Grease Box, but bread was a whole other ball of dough.

For Boelter, fresh baked bread has the power to bend space and time—knocking her back to her childhood.

Unhappy with other gluten-free loaves on the market that use additives like xanthan gum, which replaces the stretchy qualities of gluten (and upsets Boelter’s stomach), she thought she’d never be able make good gluten-free bread. “If it’s gluten- free, you just can’t. I was just like,’ screw it,’” she says.

But she didn’t give up entirely. For Boelter, fresh baked bread has the power to bend space and time—knocking her back to her childhood. As a kid, she woke up to its sweet scent every day. Her mom would tell eager young Lizzy, “You don’t want to cut the bread when it’s hot.” “But my mom would do it anyway,” says Boelter, “and then give me that one piece on the end with butter all over it.” Boelter has been striving to recreate that flavor memory ever since. “It’s just buttered bread, the simplest thing that most people take for granted,” she says. “But it’s like magic and you don’t ever forget that magic.”

It’s just buttered bread… but it’s like magic and you don’t ever forget that magic.

Shortly before the restaurant opened in 2013, Boelter discovered a bread recipe that she thought could work. It wasn’t ready for prime time yet, but she kept experimenting with different alternative ingredients—millet, quinoa, tapioca starch, psyllium husk, and chia seeds—until she eventually came up with a recipe that met her exacting standards. Today, it’s that bread that lures many people, myself included, into Grease Box.

When I stopped in for a fried chicken sandwich one recent afternoon, the crowd was a mix of what you might expect—healthy looking twenty- and thirty-somethings who wear workout apparel whether or not they’re working out and folks dressed in funky mismatched patterns with hair dyed vibrant colors. The to-go crowd, including a guy in an East Bay Tire Company uniform, seemed to represent more of the neighborhood’s blue-collar workers.

Employees from Dope, a “marijuana lifestyle” magazine were eating lunch at the table next to me. Before they left to partake in their “lifestyle” on the patio, a young woman from the group stopped to thank Hae for making delicious food that she could eat. Apparently, the rest of the trio were regular customers—which struck me as a pretty solid endorsement for a joint pushing comfort food.

While Boelter clearly loves making food for everyone to enjoy, she received the ultimate stamp of approval a year and half ago when her family flew out from Texas for her wedding. “They all came here and ate. My mom has never been prouder of me,” says Boelter. “She’s not an easy woman to please, and she was super impressed.” 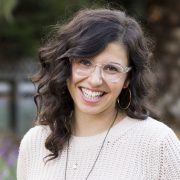 In Search Of Lost Breaths
Don’t miss one more amazing story.
Every week, we’ll send a few of our favorite stories to inspire you.
Send this to a friend
Scroll to top