In wheelchair tennis, how well you handle your racket is only half the game.
spina bifida 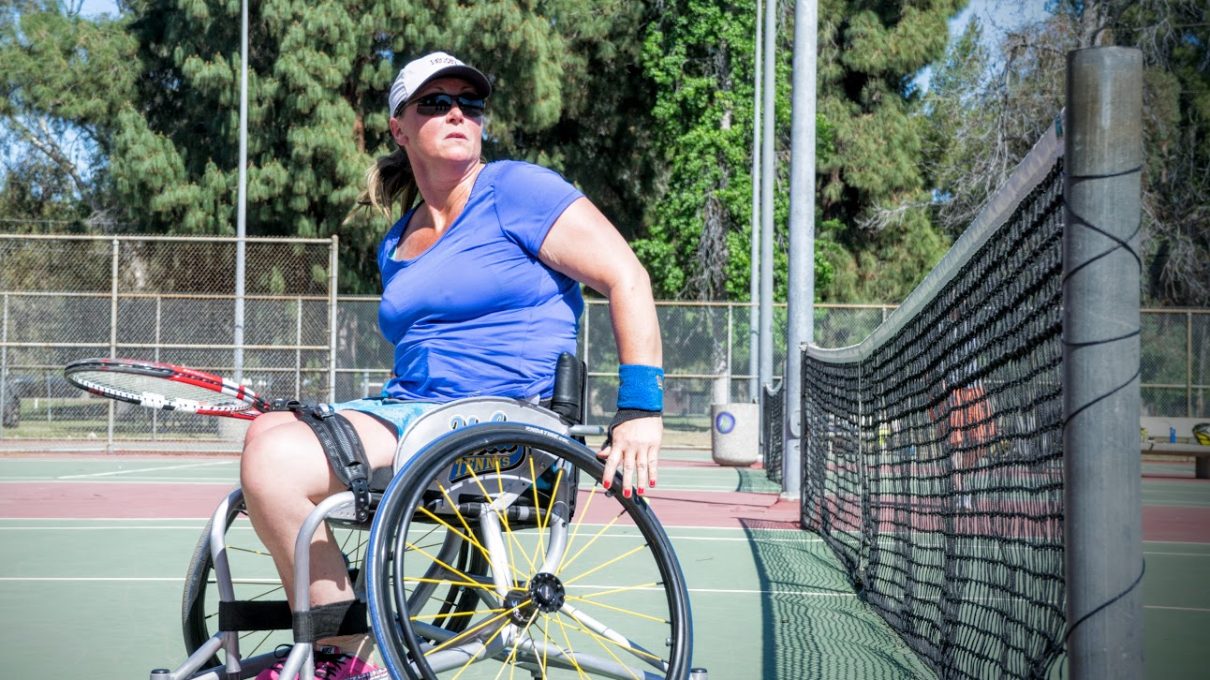 In wheelchair tennis, how well you handle your racket is only half the game.

Wendy Pasinski eyes the incoming ball and wheels furiously across the court. It bounces once, then twice as she swivels into position. She swings her racket, connecting with a powerful forehand that sends the ball straight into the net. “Ugh,” she groans, with a self-deprecating laugh.

Pasinski, 43, isn’t happy with how she’s playing this morning. But in wheelchair tennis, like any sport, there are good days and bad.

Some 30 athletes have gathered in Encino, CA on this hot, cloudless Saturday in April for the 4th annual West Coast Wheelchair Classic, a local tournament sanctioned by the United States Tennis Association. Matches sprawl out over four courts as players from across southern California compete for trophies and ranking. Between games, they talk strategy, and cheer on their fellow contenders. Grunts and whoops of joy or disappointment punctuate the air, along with the soft thwack of balls hitting rackets, and the continuous whir and scrape of wheels pivoting on pavement.

Pasinski is the only female entrant in the tournament this weekend, so she is playing against male opponents in the men’s B division. It’s not unusual at the local level, she says, but not ideal since the games won’t count toward her ranking. Formerly 6th in the U.S. in the women’s wheelchair A division, she has been working to boost her numbers after a back injury knocked her out of the circuit for much of last year.

She relishes the chance to move again, to return to an activity that buoyed her spirits. “It’s good for us emotionally to be out here, especially when we’ve been physically impaired after an accident,” Pasinski says.

Pasinski is tan with a blonde ponytail pouring out the back of her white baseball cap. She’s a bright spot on the court in her electric blue top and pink sneakers. You can hear her bubbly laugh halfway across the tennis center. Her first match of the day is against Michael Garafola, 41, a teammate of hers from wheelchair basketball. Pasinski is quick in her chair. She pushes hard to reach the ball, racket in hand, and scrambles to make a shot. “That’s what I’m talking about!” she exclaims after sending back a solid return.

“Years ago, people who had a disability wouldn’t leave the house, wouldn’t get out of bed,” says the mother of two, readjusting her Velcro chair straps between sets. “But now, adaptive sports opens up another world that people might not have known about if they they’ve been in a wheelchair since birth, or that they were missing if they were injured.”

Pasinski lands in the second category. Once an ambitious college athlete, she played basketball, ran track and also dabbled in golf growing up. But on a skiing trip at age 20, she took a jump in slippery conditions and lost control of her skis. She somersaulted through the air, falling hard on the ice and sending two of her vertebrae into her spinal cord. She was paralyzed from the waist down instantly.

It’s good for us emotionally to be out here, especially when we’ve been physically impaired after an accident.

For 15 years after her injury, Pasinski avoided sports. “Part of it was a mental block. I played basketball able-bodied; I didn’t want to play sitting in a wheelchair,” she recalls.

After her son was born, she met a woman whose son played wheelchair basketball and she reconsidered. A week later, she went to UCLA, borrowed a basketball chair and played her first game. Then a friend introduced her to tennis. She loved it. “The sport offered me freedom that I hadn’t felt for so long,” she says.

Garafola, who has been playing wheelchair basketball since 2002 and competitive tennis for just over a year, says getting into sports reawakened his athletic drive after a car accident left him unable to walk at age 15. “Adaptive sports, for me, was like a rebirth,” he says. “My competitive fire was gone for 12 years, and this brought that passion back. The accident changed my life, and then sports changed my life again.” He now runs an adaptive sports program for kids at UCLA.

Wheelchair tennis was established in 1976 by Brad Parks. It is now overseen by the International Tennis Federation, and has been a Paralympic sport since 1992. The rules are nearly the same as in traditional tennis, with one major exception. The ball is allowed to bounce twice before each return, compared to only once in traditional tennis. The first must be in-bounds, while the second may be anywhere on the court and the ball can be played. Otherwise, the scoring, courts and rackets are the same.

One key difference, however, determines how successful a player will be on the court: chair skills.

In wheelchair tennis, your racket doesn’t matter as much as your other equipment.

“Chair skills are the most important thing in any wheelchair sport,” Garafola says. “You have to learn how to hit, of course. But if you can’t move your chair, it’s pointless. I don’t care if you have the best serve or the best forehand – if you can’t control and maneuver your chair, you’ll struggle.”

Garafola recently gave a newbie this advice: “Put your racket down. Go out on the tennis court, get into your chair and just go crazy in it. See what the limits of the chair are, get warmed up. Then go pick up your racket.”

Wheelchairs encompass a surprising range of apparatuses suited to different purposes. Everyday chairs are the ones people use to get around in daily life, with two large rear wheels angled straight up and down and two smaller casters in front. Then there are sports chairs: vehicles designed for tennis, basketball, racing, rugby, and soccer. Sports chairs have canted wheels angled outward at the bottom for greater stability and tighter turning.

Sports chairs cost anywhere from $1,500 to $5,000 and are custom fitted to their users. “You kind of become one with the chair,” says Jerry Russell, 47, who founded the West Coast Wheelchair Classic.

The players bond with one another, too. “It’s a great social outlet,” Russell says. “When we get off the court, we’ll go out for a beer. We all travel to the same tournaments together and take care of each other.”

Veterans of the sport often find themselves coaching younger players. Anthony Lara, 41, a two-time Paralympian who played at the Sydney games and was an alternate in Beijing, holds clinics up and down California and will soon offer more programs with his nascent nonprofit, the 1 More Push Foundation. Born with spina bifida, a birth defect in which the spinal cord doesn’t develop properly, Lara has been playing tennis for three decades. “A lot of [the kids I coach] would never have dreamed they’d have the type of lifestyle they have, playing tournaments or traveling the world,” he says. “They feel fortunate.”

Part of the value of wheelchair athletics is finding role models and learning you’re not alone, adds Jerry Newman, 51, a former high-rise window washer whose platform tumbled from the building he was working on. “You’re exposed to other people in your situation that have been injured – but these are people who are moving on with their lives,” he says. “They’re not wallowing in their medicine, or ‘why me.’ It gives you a can-do attitude – there’s nothing we can’t do, and everyone shows you that.”

Pasinski and Zack Wentz play some doubles. “Put it where they ain’t!”

Later in the afternoon, Pasinski is back on the court for a doubles match. She and partner Zack Wentz, a 23-year-old USC student, are returning every shot and the score is rising in their favor. “Great shot, Zack – put it where they ain’t!” Newman calls from outside the court, where Pasinski’s husband, son and daughter also watch. After a grueling match, they clinch a sound victory and advance in the bracket. “That was like night and day compared to this morning’s match,” Pasinski says, grinning.

Pasinski attributes a lot to her seven years playing tennis. “Playing sports has made me feel stronger,” she says. “It has helped my confidence to have my body completely break in half, and to recover from that.”

And the game has taught her not to hold onto frustrations. “You have to play the point, and then forget about it,” she explains. “Really, life is like that for me. A day might go by where I don’t physically feel up to it, or I’m having a pity-party and I’m like, ‘This is too hard.’ But there’s only a certain amount of time for that, and then I’ve got to forget about it – because I’ve got to live life.”

All photographs by Sketch Pasinski.

Not Interested In Normality
Meira Harris
13 Days, 7 Wonders, And One Case Of Skin Cancer

Saxophone Colossus
Don’t miss one more amazing story.
Every week, we’ll send a few of our favorite stories to inspire you.
Send this to a friend
Scroll to top