Changing Ideas About Autism In The Developing World

Mary Amoah and her beautiful daughter Renata are challenging preconceptions about what it means to be normal in the African nation of Ghana.
autism 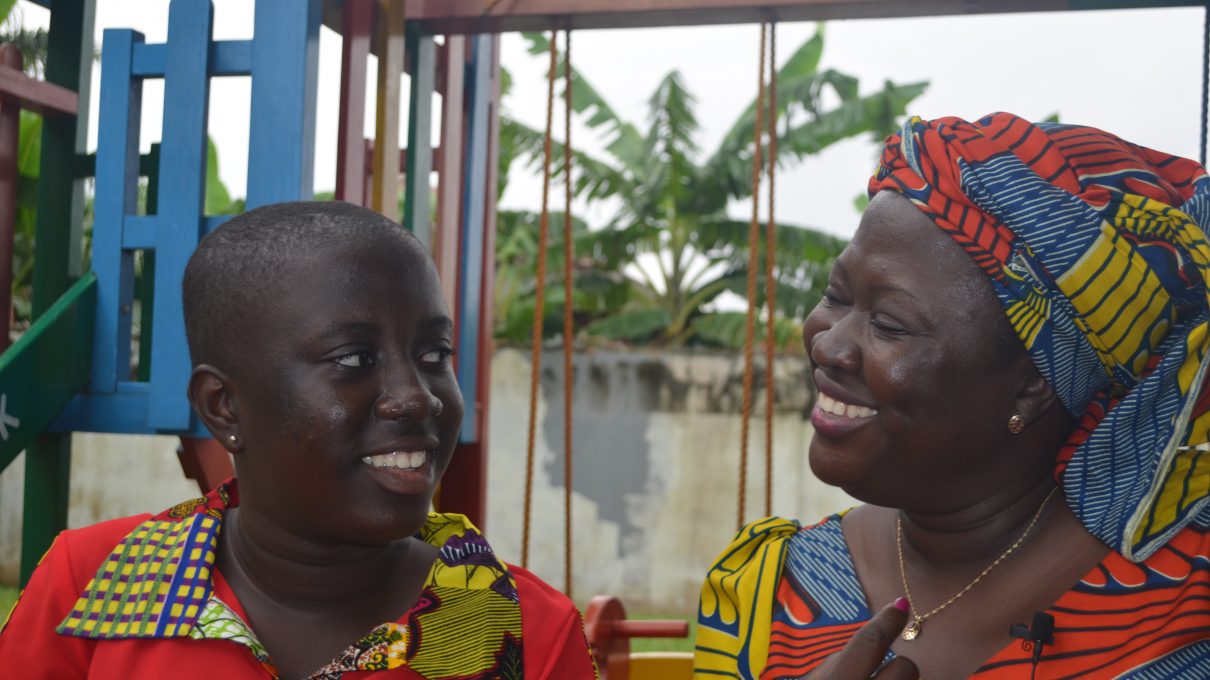 Mary Amoah once thought witchcraft was behind her daughter Renata’s silence and odd behavior.

The Ghanaian mother said she did what any other mother like her would do – she prayed, she tried different ways to lift the ‘curse,’ and then she attempted to deny there was a problem.

Renata Kuffour was fine as a baby, as a toddler she started speaking a few words, but then, just before she was three, they disappeared. Mary, a teacher of 13 years, started to worry. She left her job and started trying to find out what was wrong with her daughter.

“She would hardly look at us. She had very poor eye contact she would want to play by herself, running in circles or spinning items…she would stare at her hand constantly,” Mary recalls, speaking from the family home in Accra, the capital city of the African nation of Ghana.

Renata wasn’t potty-trained,  so she couldn’t go to school. Mary took her to different hospitals but was always told her daughter just had delayed development. 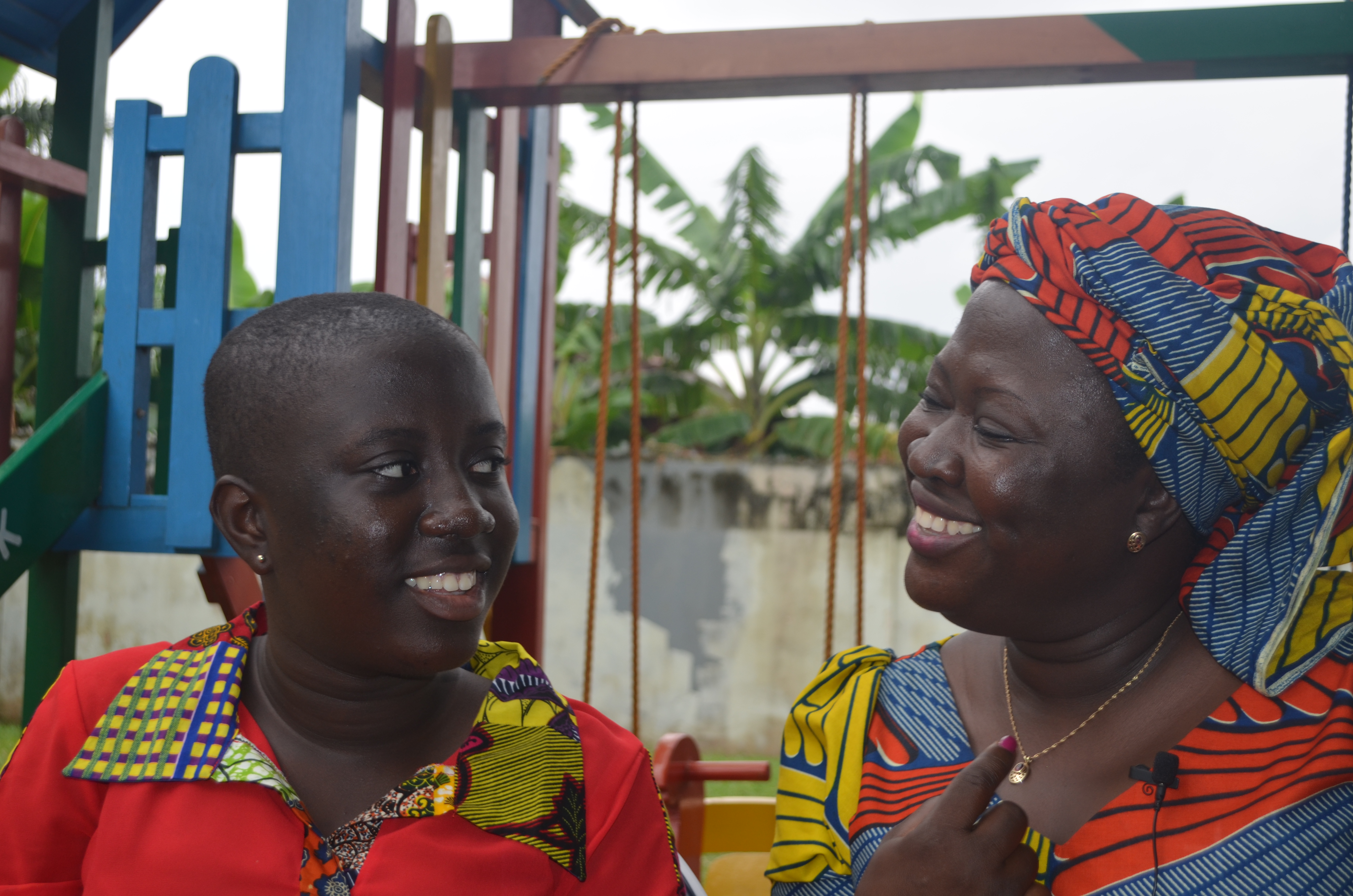 Renata and her mother share a smile of understanding.

She wouldn’t sleep, instead she would stay up singing. “That actually made me believe it was actually something to do with witchcraft,” Mary says. “Why would a child talk to herself, sing to herself, if she didn’t want to interact? Sometimes she might recite prayers but not really connecting with you, those things made me believe that it was probably something to do with spiritual forces.”

Acting on this belief, a desperate Mary took the advice of a woman who told her she could help her child by going to a market at the end of the day and collecting food scraps to cook for her. The woman told her doing this would mean Renata’s spiritual destiny would be safe, essentially lifting a curse off her.

“I am educated,” Mary says.”[But] I believed all these things and did [them].”

It wasn’t until a friend visiting from the United States suggested Renata had autism that Mary realized what was happening with her five-year-old. She joined 52 different groups on Facebook to learn about the condition, which often results in delayed development and impaired social interaction. She also began to speak to other mothers with autistic children. It opened Mary’s eyes. In Ghana, she realized there was a vast population of undiagnosed autistic children, just like her daughter.

It wasn’t easy being told her only daughter might not be able to work, that she may need help for the rest of her life, Mary recalls. But, unlike many other families in Ghana where those with disabilities are hidden or rejected, Mary decided to take action. She wanted her daughter to be able to be helped and accepted by Ghana’s conservative society.

In order to support her daughter and other children like her, nine years ago, Mary started working at a support center in Accra for children with speech and language difficulties, like Renata.

The center supports children with a range of speech or communication issues, taking in children with disabilities like autism, Down Syndrome, cerebral palsy or hearing impairments, for example. 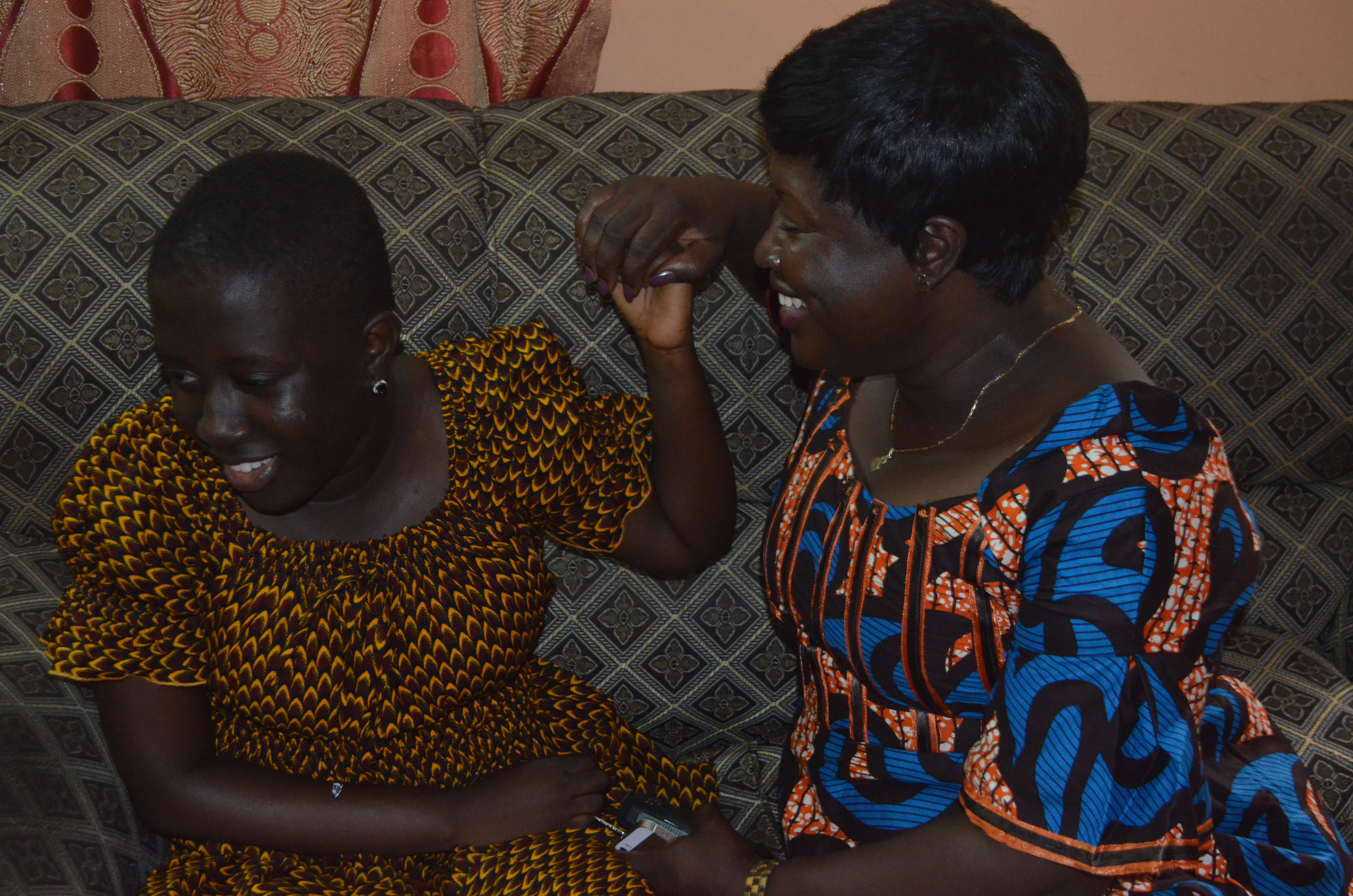 Renata plays with her mother, Mary.

As the center coordinator, Mary and her colleagues advocate to bring parents together to encourage them, and let them know that as difficult as things may be “it’s not a dead-end situation”.

This was a lesson she learned in the USA, when she was offered a place on a program for parents of autistic children at the Autism Treatment Center of America. While she got a scholarship to attend the Massachusetts center in 2013,  friends and family rallied together to pay for her airline ticket. The program taught her autism isn’t a ‘dead-end’ diagnosis, and that the parent is an autistic child’s best resource. She also met other parents in the same boat who she can still call on for  support and advice.

Coming back from the program she was inspired to take on its messages, and share them with other parents. “If the parent understands the condition, they are in a better condition to support their kids,” says Mary.

With all the support, love and work with Renata, now 13, she can sit quietly and follow her parent’s simple directions.

Mary calls her over for a kiss, and she obliges, then goes back to her seat. It’s her favorite spot, because the foam has compressed where she has sat over the years, allowing her to literally leave her mark on the space.

Every now and then, Renata — now a beautiful teenager with big eyes and a warm smile —  will start humming, and that hum will build into a song. She will laugh, bounce in her seat, and then get up to wander into the next room, or spin around in a circle. 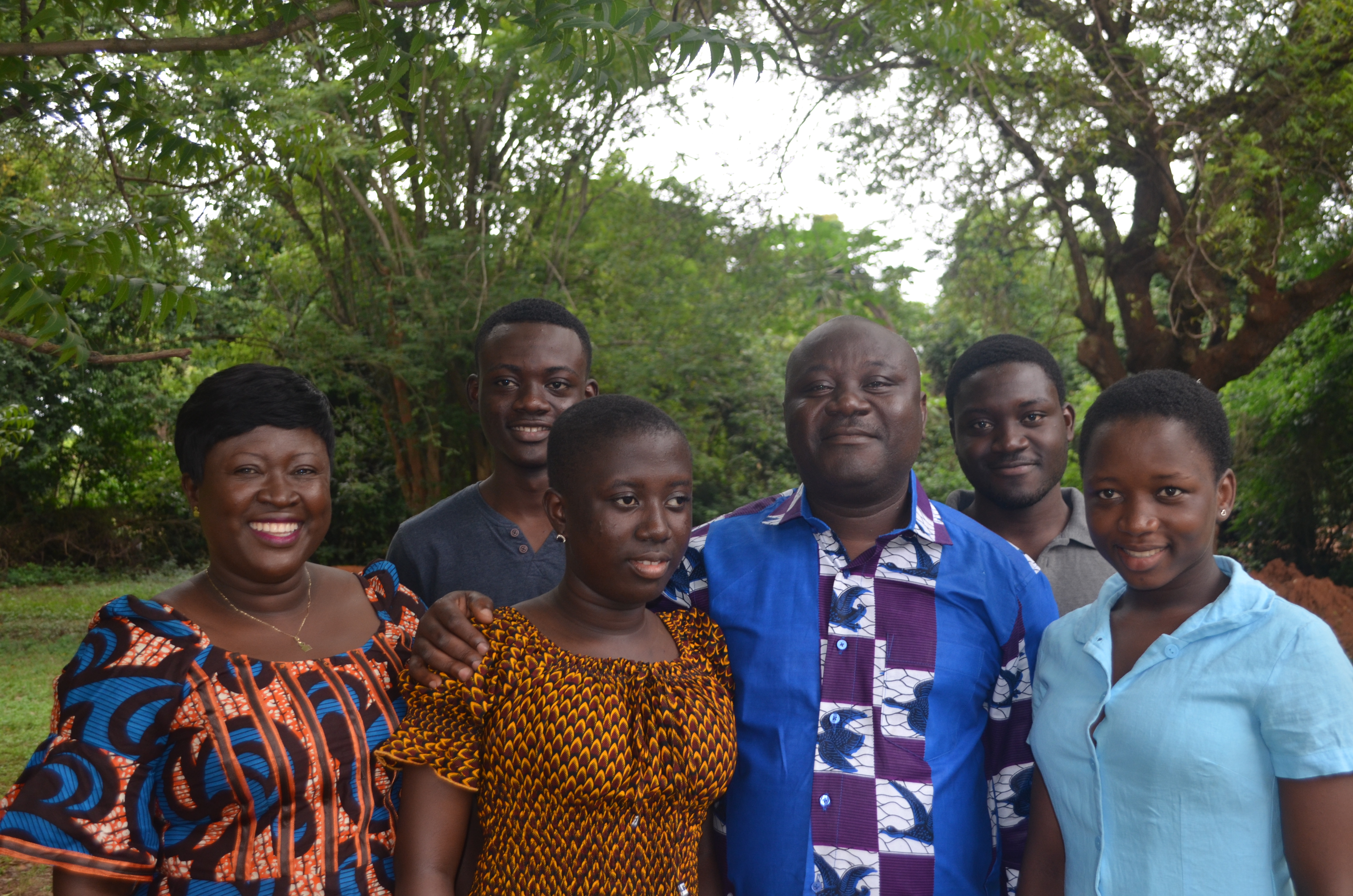 Renata and her family.

In most ways, Renata’s family embodies what Mary and the center advocate to those who have children with communication difficulties: the whole family is involved and responsible for her.

Mary’s husband, Benjamin Kuffour, is a teacher at a boarding school in Accra. The family lives in a large house on the school campus. The lanes are lined with trees and the family has their own large, tranquil backyard.

Renata’s older brothers, Charles, 18 and Emmanuel, 16, will take her on daily walks, while the family takes turns taking her to church. They also support her in her specialized diet -gluten and casein- free. She was put on the diet in 2013 and since then it has helped with Renata’s concentration and stabilizing her moods, she now sleeps well and is a lot calmer, Mary says.

Like many teenagers, Renata can be a fussy eater, Mary says. But she eats a lot of rice, vegetables, soup, chicken, and fish. She’s even starting to like fruits. “Once she sees every member of the family eating the same thing, she is motivated to try it,” says Mary.

Renata likes to run in circles, which can make people dizzy to watch. Still, the family likes to join in occasionally. “As long as it makes her happy, and she is not injuring herself, that’s fine with us,” Mary says.

Renata’s family portrait, amongst the other women of her family.

When she was younger, she didn’t like wearing clothes, which meant they could not take her out. But the family worked hard to get her used to clothing. She went through a stage of only wanting to wear tight things, so Mary dressed her in swimsuits. With sensory therapy–in other words, getting Renata used to things touching her body–she now wears glittery sandals and bold, African prints.

It’s important to Mary to dress her well, because it’s a way to project that her daughter is a person, not a disability.

“There was never a point where we saw her as a lesser person among us,” Mary says. “We have always cherished Renata, and supported her in any way we can.”

Aside from helping Renata with her day-to-day needs, Mary is focused on educating people on autism, where the condition has considerable stigma. Because she is not physically disabled, people struggle to understand why Renata is the way she is.

“That was one of the most challenging things we had to deal with,” Mary explains. “In Ghana, I think people are more used to ‘traditional’ disabilities. But when they have a child with autism and there is nothing to show on the outside, people don’t see it as a disability.”

In July, Mary took Renata to a playground, where Renata showed how happy she was by running in circles. Pleased with Renata wanting to play, Mary went to join her, grabbing her hands and playing ring-around-the-rosey. “Everyone went silent,” Mary remembers. Mothers in Ghana just do not play with their teenage daughters like that.

Renata’s autistic, but that is not all there is to her.

She explained to the shocked parents looking at her that Renata was autistic. As they left, one of the mothers confided to Mary that she had a child like Renata, but that she couldn’t handle him. When she brought her other children out to play, she left her autistic child at home.

It’s this stigma, this sense of hopelessness, that leads Mary to tell anyone who will listen about her “beautiful, lovely” daughter. She documents Renata’s life and their journey together on an open Facebook page.

Renata’s autistic, but that is not all there is to her. 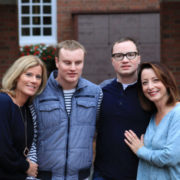 Painting In Pain
Don’t miss one more amazing story.
Every week, we’ll send a few of our favorite stories to inspire you.
Send this to a friend
Scroll to top