Millions of disabled Americans can barely afford their treatments in a healthcare system that has financially crushed them. It doesn't have to be this way.
conversion disorderdysautonomiamcas 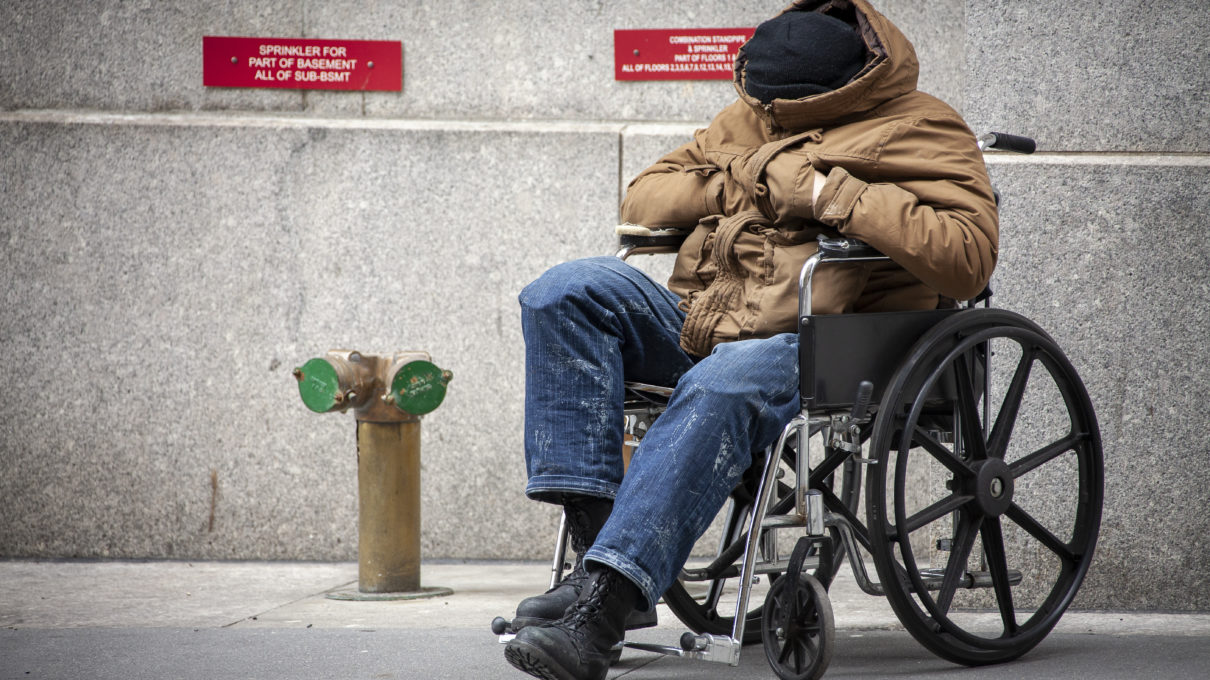 Each day, Emmett Burns, aged 21, counts the number of bandages and medicine left in his supply. A full time college student in Connecticut, Emmett is unable to work due to Mast Cell Activation Syndrome (MCAS). He currently has $3 in his checking account and no savings or emergency fund. With the $850 a month he spends on medical supplies his Medicaid doesn’t cover, Emmett can’t even consider eating out, grabbing drinks with friends, or engaging in social activities like most people his age.

“I try and put some money away,” he says. “But something always comes up, whether it is groceries or bandages or dog food for my service animal.”

Emmett is far from the only disabled American who lives with financial insecurity despite having health insurance. 91.5% of Americans have health insurance, yet each year, 62.1% of bankruptcies in the US are due to medical bills or lost wages because of illness or injury. Programs like Medicaid, Social Security Disability, and the Affordable Care Act have made health insurance accessible to more Americans. However, many chronically ill Americans find that these programs don’t come close to covering all their medical needs— a problem intensified by the cuts to Medicaid advocated by former president Donald Trump.

To chronically ill Americans, the financial barriers created by our underfunded healthcare system are every bit as tangible as physical barriers like stairs or curbs—and every bit as in need of a solution  like the American Disability Act to overcome them.

Rarely does a health insurance plan cover medications and procedures 100%. This leaves a gap that disabled Americans must fill on their own despite often being too sick to hold down a job.

Trapped In A Sick Cycle

Leah Asher knows this all too well. A 44 year-old Californian with conversion disorder, she experiences between 15 and 30 seizures a day. Under her former Affordable Care Act insurance plan, she still paid $317 a month just for her medications. Leah fought for SSI Disability and is now on Medi-Cal. However, the bariatric Rollator walker she needs is still not covered, although Leah found it on Amazon for $300 — a price that is still out-of-reach in her current situation.

“I get $940 a month on SSI, my rent is $1400, and my husband brings in about $2000 a month, so $300 right now might as well be $3000,” Leah explains. Leah’s biggest worry is that her electricity will be turned off due to nonpayment. Because she is on oxygen, losing her electricity would severely impact her ability to breathe. “It’s either buy groceries or pay a bill,” she says.

Even with insurance that fully covers procedures and medication, sick Americans are still trapped in a cycle of living paycheck to paycheck. One reason for this is that Medicare and Medicaid are least likely to cover medical needs that fall outside the categories of medication or procedures. Emmett Burn’s appointments, hospitalizations, procedures, and prescriptions are covered in full by Medicaid. But to manage his MCAS, Emmett must purchase over the counter gauze, self adhesive bandages, medical tape, peroxide and Neosporin, as well as hypoallergenic moisturizers and cleaning products to avoid dangerous anaphylactic reactions.

“I go through a lot of wound care supplies because my reactions are most often on my skin as a rash that breaks open,” Emmett explains. He spends $850 a month on over the counter medical supplies, even after skipping doses and improvising with incorrectly sized gauze, tape, and compression clothes instead of self adhesive bandages or wet and dry wraps. He doesn’t buy “a lot of things that would improve (his) health and quality of life” due to the financial strain of not being healthy enough to work. If he could, Emmett “would probably spend around $3500 each month on medical stuff” that is non-reimbursable, like bandages that fit correctly or more over the counter pain relievers–things that would make his life comfortable rather than barely tolerable.

Many disabled Americans look to Social Security Disability benefits as a reprieve. However, the application process is slow moving and arduous. Applicants are required to undergo an examination with a state-assigned doctor who has not treated them before, which can be a traumatizing experience for the many patients who have been mistreated or dismissed by the medical community. Managing the massive amount of paperwork required while struggling with a chronic illness is physically and emotionally draining for applicants, as is “proving” a disability they never wanted to have in the first place. The typical applicant has to wait between three and five months for a decision, and only 35.4% of these claims will be approved in the initial application stage. Social Security’s administrative funding has declined since 2010, resulting in delays in processing applications and increasing the amount of time disabled applicants must live on no income.

Wisconsin resident Corey Sukalich, age 38, has not been able to work since 2011, when he developed dysautonomia, a malfunctioning of the autoimmune system seen as a symptom in Parkinson’s, HIV, and other conditions. He was denied Social Security benefits because even after spending five figures of his savings on his medical care, he still had some assets left.  “I’m ineligible for many local benefits due to living with someone else,” Corey says of his long-term relationship with his girlfriend. In order to secure benefits, Corey would need to leave a girlfriend, who earns a comfortable salary and is able to help care for him, or burn through his savings on a path to bankruptcy.

In order to secure benefits, Corey would need to leave a girlfriend, who earns a comfortable salary and is able to help care for him, or burn through his savings on a path to bankruptcy.

“Most other (disabled people) I know have trouble with finances unless they are supported by another person trying to bear more than their share,” he says.

For patients who do manage to jump through the hoops required to obtain benefits, the average monthly amount they receive is $1,257.65 — a miniscule $2331.80 a year, which is often spent on medical supplies.

To make ends meet, Emmett and Corey both have sold personal belongings. Leah visits food pantries, a task made difficult due to her immobility and dependence on supplemental oxygen. Social Security benefits keep many Americans alive and off the streets, but will never lift them out of medically-induced poverty.

The Toxic Political Legacy Of The So-Called “Welfare Queen”

It’s been over forty years since former President Reagan first painted the picture of a “welfare queen”: the able-bodied person who doesn’t want to work living comfortably on the government’s dime. This image still resonates in the minds of both voters and legislators. Despite the financial struggles of Americans with medical needs, some of our elected leaders in the House and Senate are intent on cutting Medicare and Medicaid spending even further as well as repealing the Affordable Care Act. As part of its 2020 budget, the Trump White House proposed a $1.5 trillion cut to Medicaid and an $845 billion cut to Medicare –all during a national pandemic. The future of the Affordable Care Act is also on the chopping block as it is debated for the seventh time in the Supreme Court. Legal scholars believe this will be the last challenge to the ACA, citing judicial exhaustion, although whether the court decides to uphold or strike down the law remains to be seen. While President Biden plans to issue an executive order extending the ACA’s enrollment period, the continued existence of the law still rests in the hands of the court.

Legislators often discuss healthcare in terms of freedom, ignoring the fact that the chronically ill have no freedom when they do not have the financial and medical resources to participate in normal life.

Legislators often discuss healthcare in terms of freedom, ignoring the fact that the chronically ill have no freedom when they do not have the financial and medical resources to participate in normal life. “American freedom and liberty have taken a hard blow today,” Rep. Steve King (R- IOWA) famously said following a Supreme Court decision upholding the Affordable Care Act. Most healthy Americans have only occasional medical expenses, not to mention the ability to work full-time and obtain private healthcare. Healthy Americans also have the physical stamina to work more hours and save money for emergencies. Like many American institutions, our healthcare system seems designed more for healthy people with occasional illness than for the chronically ill who need it most.

Our inadequate safety net for chronically ill Americans is detrimental not just to disabled Americans, but to the development of our country. The American economy runs on innovation and fresh ideas. How many disabled Americans have brilliant ideas that will never come to fruition simply because they must put all their resources into surviving with a very flawed, frayed social safety net? At 21, Emmett Burns has already published a book of poetry, yet struggles in school. “Because I can’t afford to properly care for myself, I end up getting sick more often and for longer. Because of that I miss school and my grades aren’t good,” he explains.

In the current state of healthcare in our country, disabled Americans are not thriving financially or otherwise. They aren’t saving for the future. They’re just trying to survive the present.

Tate Gunnerson
Do you know someone else who would enjoy this story?
You might also like...
The Tale Of The Long Island Mariner
Amy Ridout
Back In The Saddle

How I Learned to Soften My Pain and Give Vulvodynia a Break
Don’t miss one more amazing story.
Every week, we’ll send a few of our favorite stories to inspire you.
Send this to a friend
Scroll to top