Nikki Bradley, an Irish climber and cancer survivors who scales mountains and glaciers with a crutch, has come a long way from being ashamed of her disability.
cancerewings sarcoma 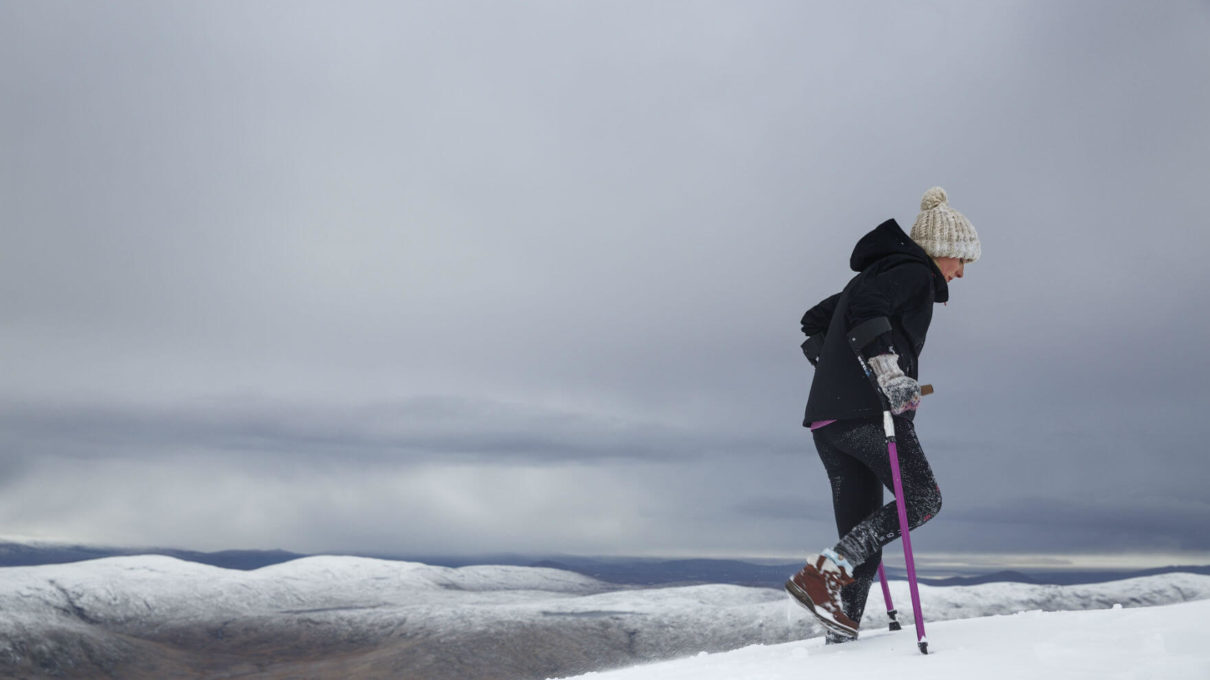 The wind flung the rain sideways and visibility was nil. For the umpteenth time that day, Nikki Bradley pulled her crutch out of the mud. Bending over, she plunged her hand into the mire and retrieved the tip, which had detached from the pole.

At 667m, or around 2,000 feet, Muckish Mountain is the 163rd highest peak in Ireland. The flat-topped mountain should have been a walk in a park for the team, who included experienced mountaineers.

But on that wet, wild day in the late autumn of 2013, that’s not quite how things panned out.

“We couldn’t have picked a worse day,” Bradley remembers. “We were saturated with rain and freezing cold, and I was wearing gym leggings.”

Only pride prevented the group from summoning help.

“One of the people that was with us has climbed Mont Blanc; he’s climbed crazy mountains around the world so he was adamant that we were not calling mountain rescue.”

By the time the team made it off the mountain, a two-hour walk had become six hours and they were bedraggled and exhausted.

“I was as proud as if I had just climbed Everest,” Bradley says.

“I was as proud as if I had just climbed Everest… If I could do that when I’m not even at a good level of fitness, in a year’s time what else could I do?”

That night, despite the pain and fatigue, Bradley couldn’t sleep. Her mind was racing.

“I lay there that night thinking, if I could do that when I’m not even at a good level of fitness, in a year’s time what else could I do? That’s where the really positive stuff started happening.”

It was about time things changed for the better.

A Diagnosis With Bone Cancer

Almost a decade earlier when Bradley was 16, she was diagnosed with Ewings Sarcoma, a form of bone cancer.

As a teenager from Donnegal, Ireland, Bradley had spent the summer ignoring a worrisome lump on the right-hand-side of her pelvis. “Part of me thought it was nothing, but a bigger part of me knew it was something serious, and I was terrified.”

Finally, she showed her mom what had become an orange-sized lump, and around Christmas, she learned her diagnosis. It was a shock, but there was some good news: localized on the bone, the cancer was unlikely to spread.

After a year of surgery, chemotherapy and radiotherapy, Bradley was given the all-clear. The young woman resumed her life, happy to move forward but self-conscious about her new limp: along with the tumor, surgeons had removed surrounding muscle, causing her leg to contract.

Bradley looks back on that limp wryly.

“I always say, just be so grateful for everything, because the complaining I did about that tiny tiny, limp that nobody even noticed, compared to now…”

Almost three years after her diagnosis, Bradley was studying for exams when she felt a twinge in her hip. Soon, the twinge was a sharp pain.

“For the following year I experienced the most pain I’ve ever experienced. It felt like touching a live wire.”

Radiotherapy had caused her hip bone to crumble, she learned. The fragments were leaning on damaged nerves, sending debilitating waves of pain through her body.

A hip replacement gave instant relief, and for a second time, Bradley launched herself into the “normal” world of university study and socialising.

But it wasn’t long until the pain returned, and Bradley began to struggle to walk.

The Limp That Wouldn’t Stop Growing

Determined to not make the “huge step back” to crutches, Bradley tried a workaround.

“I bought a bike; I told my friends I was going to use it to cycle to college but I wasn’t able to cycle, I was in too much pain.

“I was using the bike as a crutch: to anybody else it looked like I was just walking my bike.

“I didn’t want to have to face what I kind of knew was coming. Everything that had happened in my entire treatment was never just something small, it always turned out to be huge.”

Bradley’s fears were confirmed when doctors uncovered the source of her pain: her prosthesis had caused an infection in her hip. Doctors removed the part, replacing it with a custom-made part designed to fuse with her bones.

But that wasn’t to be: her bones were so damaged there was nothing for the prosthesis to fuse to. Unanchored, the prosthesis moved up and in towards her spine, leaving Bradley with an 11-centimetre difference in leg length.

“I hated the idea of having a disability; I hated being a disabled person.”

The slight limp was a distant memory: crutches were now part of Bradley’s everyday life, and the young woman felt conspicuous.

“I hated the idea of having a disability; I hated being a disabled person.”

She remembers a holiday in Egypt. Walking through a hotel lobby in a bikini and an open robe, she saw a group of men watching her.

Their eyes were fixed on her body, at the scar that had become larger with each operation now ran from her hip to her knee.

“They were openly staring at my scar. My leg was about half the size of my good leg because there was no muscle. It looked very different, and I was extremely self-conscious.

“That feeling of knowing I couldn’t do anything about them looking, and trying to walk fast to get away: that was a horrible feeling.”

Seven years ago, Bradley began a training program in a bid to reduce her pain levels and strengthen her “good” leg and her upper body. It worked. Pleased with the success, she began looking for other challenges.

“I wanted to be able to look back on life whenever I was older and be able to say, I ticked off all these different things and cancer just so happens to be one of them.”

Muckish Mountain catapulted Bradley into a series of adventures. Each was bigger and better than the last: mountain climbing, rally driving, deep sea driving, rock climbing and abseiling. She scaled a glacier, and attempted a world record in Holland.

Some of the challenges meant a large step outside her comfort zone, says Bradley, a self-described “drama queen”.

She recalls the “raw fear” of becoming stuck on a rock climb.

“I was secured by the rope but I was completely upside down. To get back around the right way was quite difficult, because I’m so limited with how I can bend with my right leg.

“I do prefer the challenges that have that level of excitement: there’s something kind of addictive about that feeling of not being sure of what’s going to happen.”

“That’s an incredibly isolating realization, that there’s nobody you could turn to.”

She also began Fighting Fit for Ewings, an awareness campaign and point of information.

“When I was diagnosed there was no information in Ireland … that’s an incredibly isolating realization, that there’s nobody you could turn to.”

Each challenge exacts a toll on her body. While training for her 2016 Guiness World Record attempt to become the fastest woman to complete five kilometres on crutches, the event requirements meant Bradley had to compete with her leg strapped up.

With her leg “hanging by a thread”, Bradley’s next surgery will be an amputation, something she’s keen to avoid for as long as possible, she says.

“I could have a bad fall tomorrow and be fast-tracked to amputation, or I could live this way for another five years.”

As she’s grown older, Bradley has lost the self-consciousness she had as a young woman, when she leaned on a bike instead of crutches.

Now, she welcomes the unexpected conversations she has with people who ask her about her disability. “I’ve found myself in lifts talking about hip replacements to old men who’ve had a knee replacement.

“You find yourself having really personal conversations with complete strangers from every walk of life. I get to really connect with people all the time.”

With Bradley so candid about her experiences, as well as firmly in the public eye with her challenges and speaking events, the word “inspirational” is one she hears a lot.

“[Inspirational] is the most overused word in the world.”

She mentions a man she met during her world record attempt. “He’s a business owner, he’s a husband, a father: he’s a man that had cancer three times and has achieved enormous things: that is genuinely inspirational but I still would be careful with how often I would say it to him.”

“It’s said quite often to me and I always feel uncomfortable because I feel I don’t deserve the label yet. When I’m on my deathbed looking back, then I might be able to say, okay, I was inspirational because I’ve achieved this, this, and this. But at the moment I’m just at the starting phase of it as far as I’m concerned.”

Jennifer Furner
Do you know someone else who would enjoy this story?
You might also like...
Fighting Cancer Among The Q'eqchi'
Brent Crane
Free Flying Over Mountains With Quadriplegia

The Woman Putting Disability On The Catwalk, And The Cover Of Vogue
Don’t miss one more amazing story.
Every week, we’ll send a few of our favorite stories to inspire you.
Send this to a friend
Scroll to top