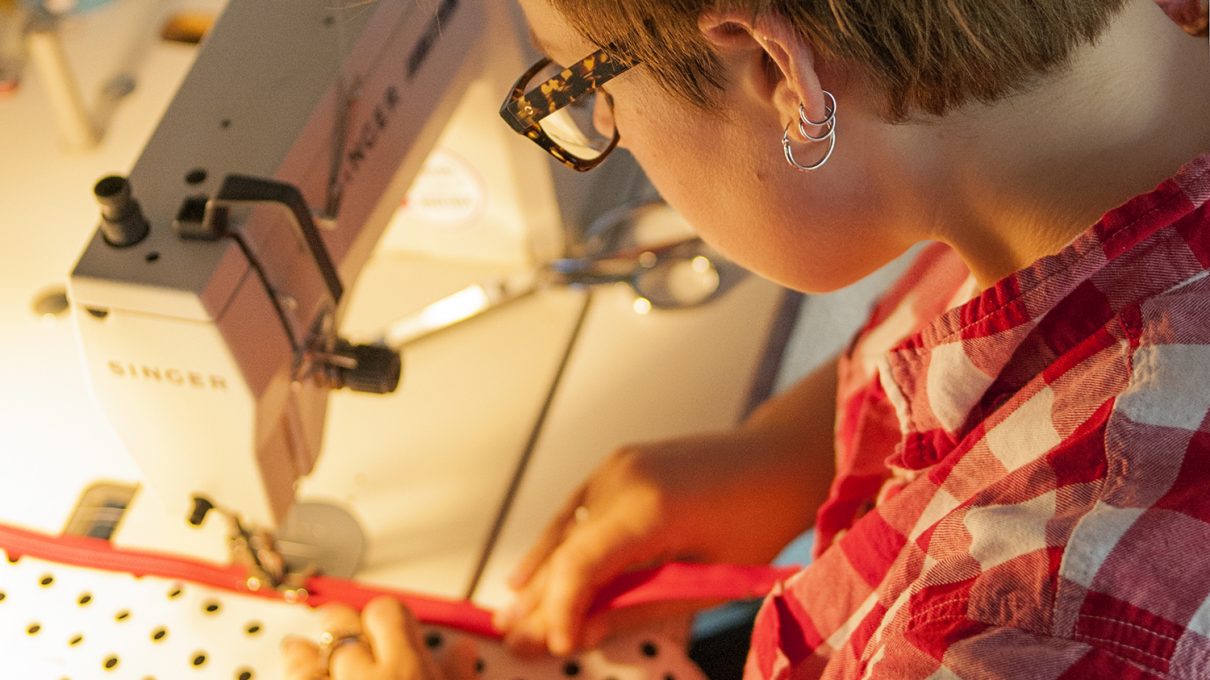 Balancing a chronic illness and traditional employment isn’t easy. For those with an artistic streak, some turn to platforms like Etsy to create on their timeline and sell to a global audience. 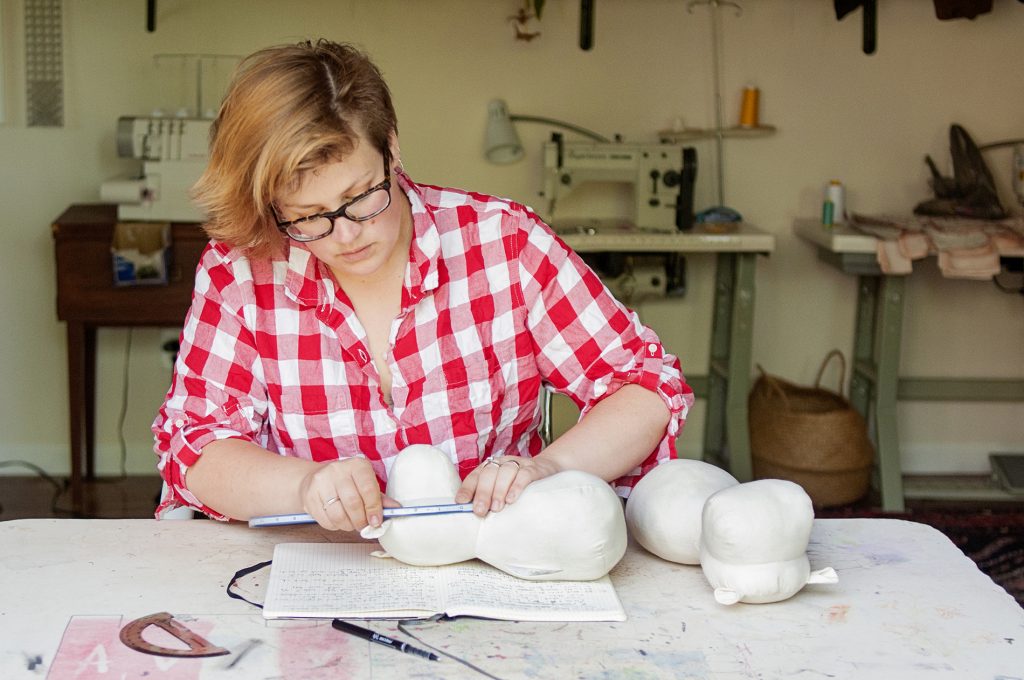 In 2006, when Lucy Blaire was diagnosed with Crohn’s disease, she lived in Boston with her boyfriend (now husband), working full time as a seamstress. After her diagnosis, she continued working, but taking 22 or 23 pills a day made it a challenge.

After trying several different medications, seeing several doctors and struggling through work, Blaire and her boyfriend moved to upstate New York to focus on her health and be closer to her family. “Everything was so new, you have to try a billion different things medication-wise until you find something that works for you,” she says.

Blaire found a new doctor in Albany, and her Crohn’s is now in remission. But instead of getting a full-time job, she opted for self-employment. After freelancing as a seamstress making custom drapes didn’t take off, she began making oilcloth makeup bags and eventually opened an Etsy shop called Lucy Blaire Creations.

Blaire also loves creating sewing patterns but found it hard to meet magazine deadlines now that she has two kids. When Etsy added digital downloads, she began selling patterns (this pattern for a stuffed hippo is her top seller) as a way to scale up her business. Etsy processes payment and emails the PDFs to customers, so Blaire doesn’t have to manage that process. 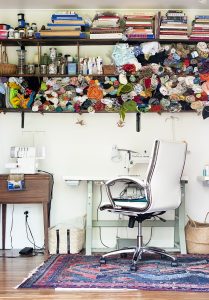 A look inside Blair’s crafting studio.

She credits Etsy with giving her the flexibility she needs to take care of her kids and her health. “Having children or having a chronic disease, it doesn’t make working impossible but it makes working on somebody else’s schedule impossible,” she says. “To be able to run my own shop or take care of a digital download is just so freeing. Maybe today I feel good in the morning, so I can work on my own schedule.”

Katrina Isbill-Floyd, aka Bella McBride from McBride House in New Brunswick, Canada, can relate. Isbill-Floyd was diagnosed with fibromyalgia in her early twenties. She tried working as a botanist but found the travel and work to be overwhelming while also dealing with her chronic pain issues.

“Over the years I have fought this tooth and nail and have struggled to find a proper balance,” she says. “Because of this, working outside my home became more and more difficult so I needed a way to supplement our income and give myself a creative outlet. I’ve always wanted to have my own business and finally decided that time passes no matter what, so why not give it a try?”

Isbill-Floyd opened an Etsy shop selling needle-felted animals in 2009. “It still astounds me that you can take a clump of soft fluffy wool and with the manipulation of a single barbed needle you can create a 3D piece,” she says. “It’s very relaxing if you just let your mind drift and let the wool do the talking.”

Fortunately, muscle pain from her fibromyalgia doesn’t stop her from felting. “In fact, I find that if I don’t do it for a few days, my hands will begin to ache,” she says. “It’s such a soft gentle movement that it really seems to help with the pain.”

Isbill-Floyd also appreciates Etsy’s broad customer base. “In my small community there is no way I would have been able to sell what I was making, let alone have the energy to do so,” she says, “and therefore, would not have been able to have either the confidence or the skill coming from continual practice.” She’s now doing a few select shows a year and credits Etsy with giving her the confidence and practice to do so.

“I’ve never been sicker, but I’ve also never been happier,” Isbill-Floyd says. “My needle felting is what gets me up in the morning and gives me something to look forward to.”

For Jen Sulligan, who was diagnosed with stage IV Hodgkin’s lymphoma in 2010, making soap and lip balm for her Etsy shop Little Batch Apothecary gave her a much-needed distraction. “I got through treatments [six months of chemotherapy] by looking forward to the days when I felt strong enough to make soap,” Sulligan says. 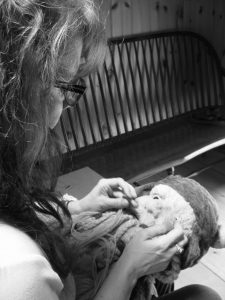 Katrina Isbill-Floyd crafts through a bout of fibromyalgia.

Sulligan got interested in soap-making through family stories. “I’d heard a story that, back in the day, my great great grandmother would make basic soap from scratch in a big old tub in her back yard,” she says. “I was intrigued. Although her recipe unfortunately did not get passed down through the generations, through lots of reading and experimentation I was able develop my own fantastic formulation of soap.” She no longer makes soap to sell but she does make it for her family. Her shop now features other products including cologne, perfume oil, hand and body cream and candles.

After Sulligan went into remission, she set to work turning her shop into her full-time job rather than returning to her career as a school librarian. “I like the virtual shopping mall aspect of Etsy,” she says. “I get customers coming into my shop that I might not otherwise have come into contact with on my own non-Etsy website.”

Sulligan launched a stand-alone website for Little Batch Apothecary soon after completing treatment and sold her products at craft shows and in a few stores. “I did little to no advertising,” she says. “I still don’t really advertise. The quality of my products and my customer service is what grew my business.”

Turning her craft into a full-time business isn’t easy, but Sulligan enjoys working for herself. “It’s so easy to let our circumstances predict our lives,” she says. “Although a tougher undertaking, it’s a lot more rewarding to take the reins and guide your life where you want it to go.” 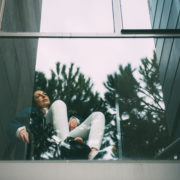 If You Want To Survive COVID-19 Lockdown, Learn From The Disabled
Angie Ebba
The Deaf Politician Who Listens To Everyone

The Left Foot Of The Fastest Woman Alive
Don’t miss one more amazing story.
Every week, we’ll send a few of our favorite stories to inspire you.
Send this to a friend
Scroll to top