Even with a limb difference, Paralympic triathlete Mohamed Lahna is always up for the next adventure.
limb differencepffdproximinal femoral focal deficiency 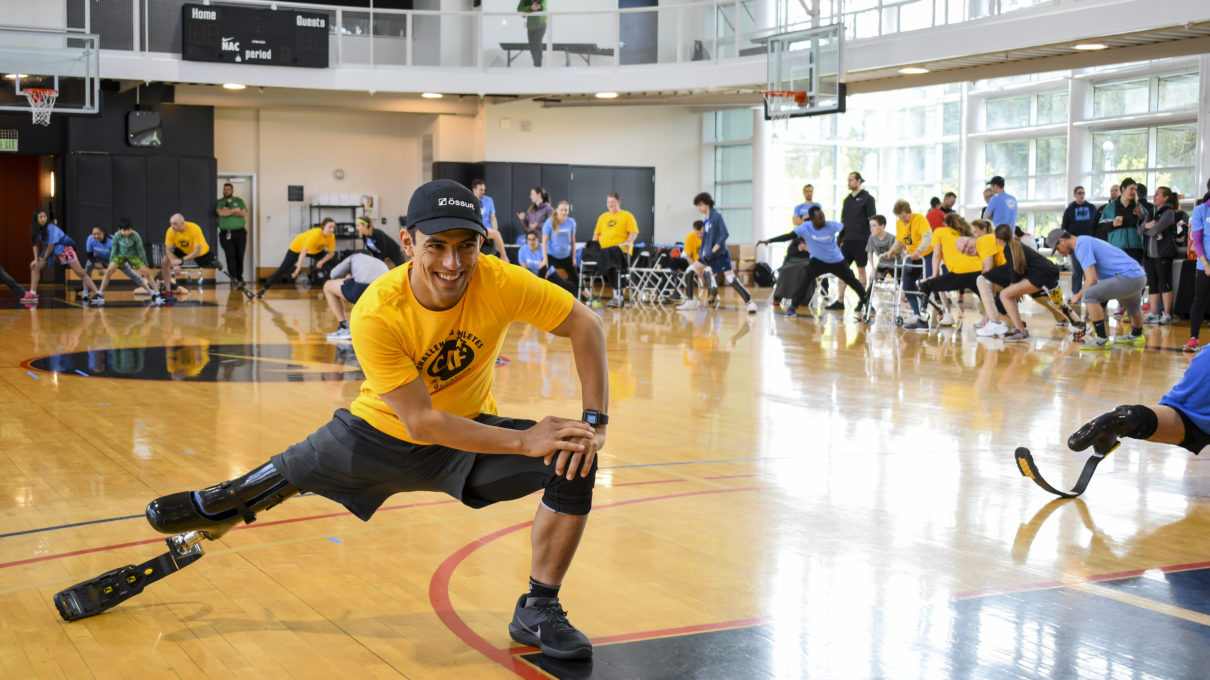 Like many children in his Casablanca neighborhood, Morocco native Mohamed Lahna grew up crazy about soccer. Few families he knew could afford leagues or lessons, but local kids organized street games almost daily.

Occasionally, Lahna exited those games in tears. He was born without a right femur, due to a birth defect called proximal femoral focal deficiency (PFFD). The rare condition, which affects approximately 1 in 200,000 children, can cause major limb, joint and muscle problems.

PFFD left Lahna’s one leg significantly shorter than the other. Children could be cruel about the difference.

“My mom always told me, ‘Their words will just fly into the air, so go back out and play. Don’t pay attention to what they are saying,’” says Lahna.

He followed that advice, playing in a shoe glued atop colorful foam pads that evened out his leg length. When the shoe became unstable, Lahna played on crutches. Eventually, while attending an elementary school for children with disabilities, he received a non-bendable leg made of wood.

“He took me to the pool while he was doing his workout,” says Lahna. “I was so amazed. I still remember the smell of the chlorine.”

Ready to jump in himself, Lahna found a swimming club for adults with disabilities. He and his father visited weekly, until organizers finally agreed to let young Lahna in.

“For the first time, I had a proper leg with a proper knee. I was able to sit on a chair and walk. It changed my life.”

A few years later, his father’s passenger was a French designer who made prosthetics for Moroccan veterans. Though he had never accommodated a foot like Lahna’s, he offered to try.

That prosthetist invited Lahna, now in his 20s, on a group cycling trip through Africa’s Atlas Mountains. He joined Moroccan and French participants who had faced amputations.

“When you have a birth defect like mine in the U.S. or Europe, most parents amputate the foot because it’s easier to fit a prosthesis. But for me, at the time, there wasn’t a lot of that information,” Lahna says.

The prosthetist experimented with designs until something worked.

“For the first time, I had a proper leg with a proper knee. I was able to sit on a chair and walk. It changed my life,” Lahna says.

“Most of the French amputees were not shy. They were showing their legs, wearing shorts. Most of us on the Moroccan side were wearing pants and trying to hide our disability. I remember that contrast,” says Lahna.

Lahna learned about triathlons on that trip, and as he strengthened his cycling skills, he decided to train for one. Doctors had always said he couldn’t run—Lahna has no right hip socket—so he researched racing wheelchairs. When those proved too expensive, he and a friend built one.

Perseverance also earned Lahna his first trip to the United States. Though he spoke no English at the time, he used an online translation tool to contact the organizers of a camp for adaptive athletes. He flew to Atlanta for the event, and later married the volunteer translator who helped during his stay.

“I was so happy to see people of all ages doing those events. It blew my mind to see all those kids running around with their tiny blades,” says Lahna.

While in San Diego, he met Paralympic runner and triathlete Sarah Reinertsen. She also lives with PFFD, and she encouraged Lahna to try running. CAF helped him get his first running blade; months later, he finished his first marathon. Lahna went on to complete the Ironman World Championship in Hawaii and won several International Triathlon Union (ITU) World Paratriathlon medals.

“The flame of going to the Paralympics started when I met that swimmer, but I didn’t know how to get it done. It was a long journey, and so many people supported me all the way,” says Lahna. “Rio was really the highlight of my athletic career.”

With his own family growing, Lahna stepped back from Paralympic competition after Rio. But soon, he felt a tug to return. He became an American citizen in 2018, moved from California to Colorado with his wife and two children, and joined the paratriathlon residency at the U.S. Olympic & Paralympic Training Center.

When paratriathlon was left off the Tokyo 2020 roster, Lahna transferred to the Paralympic cycling team and refocused his training regimen. COVID-19 has since pushed the Tokyo games to 2021, and Lahna’s family returned to California when they welcomed a third child. Still, he continues to train and hopes to qualify for Tokyo this summer.

Lahna has also set a goal to cycle from the lowest to highest point on every continent, together with friends André Kajlich, who had parts of each leg amputated after an accident, and Lucas Onan, who was born with arthrogryposis and has an underdeveloped left arm.

The trio ticked South America off their list in early 2020. Taking budget and logistics into consideration, Lahna expects them to spend about 10 years summiting all 7 peaks.

“It’s never been done before, by someone able-bodied or by anybody else,” says Lahna. “We want to be the first. We want to inspire people with disabilities to aim higher.”

That echoes the advice he gives to individuals living with PFFD, and to their parents.

Lahna remembers how his mother gently encouraged him to keep playing soccer, regardless of what other children said.

“Your kid might have this physical disability, but he or she is capable of so much.”

“Every kid and situation are different. But even though they are not like their brothers or sisters or classmates, they can have a taste of taking risks,” he says. “Your kid might have this physical disability, but he or she is capable of so much.”

Meghan Beaudry
Do you know someone else who would enjoy this story?
How I Learned to Soften My Pain and Give Vulvodynia a Break

Men Get Breast Cancer Too
Don’t miss one more amazing story.
Every week, we’ll send a few of our favorite stories to inspire you.
Send this to a friend
Scroll to top