The 24-year-old, who lives in Evanston, IL, was born with retinitis pigmentosa, which causes progressive vision degeneration of the retina. “I was born with perfect vision,” he says. “At three, I got my first glasses, and in high school I had to start using a cane.” He is legally blind, although life is easier on him now than he was as a youngster. “I basically would hide my cane in my backpack and not want to use it. I was only the only kid who used one. I was kind of picked on a lot and I was embarrassed of my disability.” He played on a YMCA basketball team, never letting his coaches know about his vision impairment, staying under the radar by running up and down the court, even making a few plays and shots. “The coach found out only because he ran into me in the parking lot and saw me with my cane,” says Salmaan. “He was shocked: I wish I could’ve seen his face.”

“I was born with perfect vision. At three, I got my first glasses, and in high school I had to start using a cane.”

Salmaan’s mother, a teacher originally from Pakistan, encouraged her son to try any activity that caught his fancy, from horseback riding to rock climbing to downhill skiing via the American Blindness Skiing Foundation. On trips to Alpine Valley in Wisconsin, sighted guides gave him verbal guides as he navigated the chairlift and the mountain: “’Chair coming in 3, 2, 1’: Then they helped guide you to sit down,” says Salmaan. “They call you commands from behind: ‘Looking good, looking good, left turn coming ahead.’ It’s constant communication: all I have to do is listen and ski.”

Salmaan loved the sport so much that he went on weekly trips, and within a year was on black diamond trails, addicted both to the to the speed and the attention he got.  “Because we wear these big orange bibs that say “Blind skier,” I’d get stopped and get a lot of compliments: ‘Wow, you’re blind and you could still go down the steep mountain,’” he says. 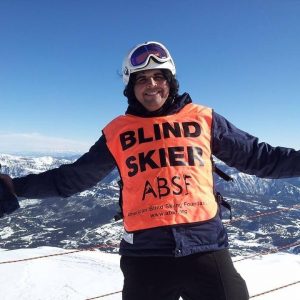 Salmaan in his “Blind Skier” bib.

“I like going fast,” might well be Salmaan’s motto. This also explains his love of ice hockey, which he picked up two years ago, wanting to add a new challenge and thrill to his long list of challenging thrills. Thanks to his experiences rollerblading and skateboarding he took naturally to the ice and enjoyed learning skills like skating on one leg, going backwards and perfecting a screeching hockey stop. Salmaan now skates for the Chicago Blackhawks Blind Hockey team, playing in international tournaments and honored as the team’s player of the month in early 2017. Blind hockey is fast paced like sighted hockey, but with a wider net and a larger, heavier puck filled with ball bearings to provide an audible presence (the puck’s weight also means the players don’t need to worry about objects flying at their face.) Another difference between hockey for the sighted and for the blind: no fighting. “It’s a little too dangerous,” Salmaan admits.

Not like Salmaan’s the physically fighting type. He channels his energies into proving, over and over again, that his impairment won’t stop him, although occasionally he gets frustrated by the thoughtless but well-meaning sighted. Not long ago, a woman shouted “It’s not rocket science!” at him while he waited for a revolving door to slow down at a busy train station. “I turned around and I showed my cane,” he says, adding. “Some people are ignorant.” Sometimes, too, people assume he can’t manage stairs and stick him in an elevator not realizing “it’s kind of hard sometimes for me to find the button. Sometimes there’s not Braille in the elevator so I’m stuck in a box.” It’s with these types of people that he most relishes telling stories about his time on the slopes or in the rink. “They almost have a mini heart attack. They’re like, ‘But you’re blind.”

If Salmaan’s battling anything, it’s for the education to get him on track to his dream job as a disability or human rights attorney. After getting straight A’s in high school, he says: “College kind of ruined me a little bit: I had to fight a lot for my accommodations.” At University of Illinois in Chicago, the school was unable to consistently provide him the large-print exams and assignments he required: “It would always be not enlarged the right way or upside down missing or with sections cut off,” he says. “I was really frustrated with that: I would have to storm into the office, 12 blocks from my dorm, and have them fix it.” He filed a few lawsuits with the school and ultimately transferred to Northern Illinois University, from where he graduated with degrees in sociology and anthropology. He tried to take the LSAT but the LSAC ultimately refused his application, citing his requests for what they saw as too many accommodations like large font, a live person reading and breaks to rest his eyes—accommodations he received when taking the ACT. “They wouldn’t even give me my money back,” he says.

Salmaan also suffers from anxiety: the sports help, but he can’t always get to a rink or to a mountain. “The two things that help the most are prayers and music,” says the practicing Muslim. While attending a recital in college he heard a harpist perform and thought: “I have to learn how to play it.’” With the help of a good teacher as well as Braille and light stickers he places on the strings, he has become proficient enough to take his door-sized, ten pound carbon fiber harp to play at open mics around Chicago. 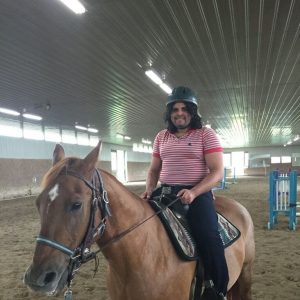 When he’s not playing hockey or the harp, Salmaan enjoys horse-riding.

Salmaan intends to start law school after racking up some time in the workforce. He’s currently spending time with kids at Youth Opportunity United, which provides tutoring and counseling to Evanston families. He enjoys working with kids and showing off for them on field trips: “We went to a water park and I was doing flips off the high dive. All the kids were like ‘He’s fun! How can he do that?” He likes to think that he kids gain something by watching the way his vision impairment forces him to adapt to his surroundings and situations. “It’s almost like giving kids more knowledge by [my] being there,” he says.

One has to wonder whether Salmaan would be who he is, the way he attacks challenges, if he could see. “I might not,” he admits s. “My vision impairment shaped me in a very different way, and the activities I played [did too.]” Before he discovered his prowess for sports, he was the kid who was so shy and embarrassed about being blind that he hid it from other people. “The old me would be like, ‘I don’t think I can talk to you right now.’ I felt like everybody looked at me differently and just thought by looking at me, that if I can’t see, I can’t do anything.”

As we talked, the shy Salmaan, who initially gave short and quiet answers, relaxed into the confident Salmaan, who volunteered more favorite examples of his adventures, punctuated by a modest but proud laugh that grew more frequent throughout our conversation. He remembers another favorite adventure: “The funniest one was when we went caving, I was the only blind person on that trip. It was really dark — even the headlights weren’t working, so dark inside. I was climbing and going faster than everybody else, just by feeling around.”

Community Roundup: New Accomplishments, Post-Diagnosis
Don’t miss one more amazing story.
Every week, we’ll send a few of our favorite stories to inspire you.
Send this to a friend
Scroll to top