Whether hunting gators or surviving cancer, Ronald Guy is used to looking death down the throat.
follicular lymphomagraft versus host diseaseGVHD 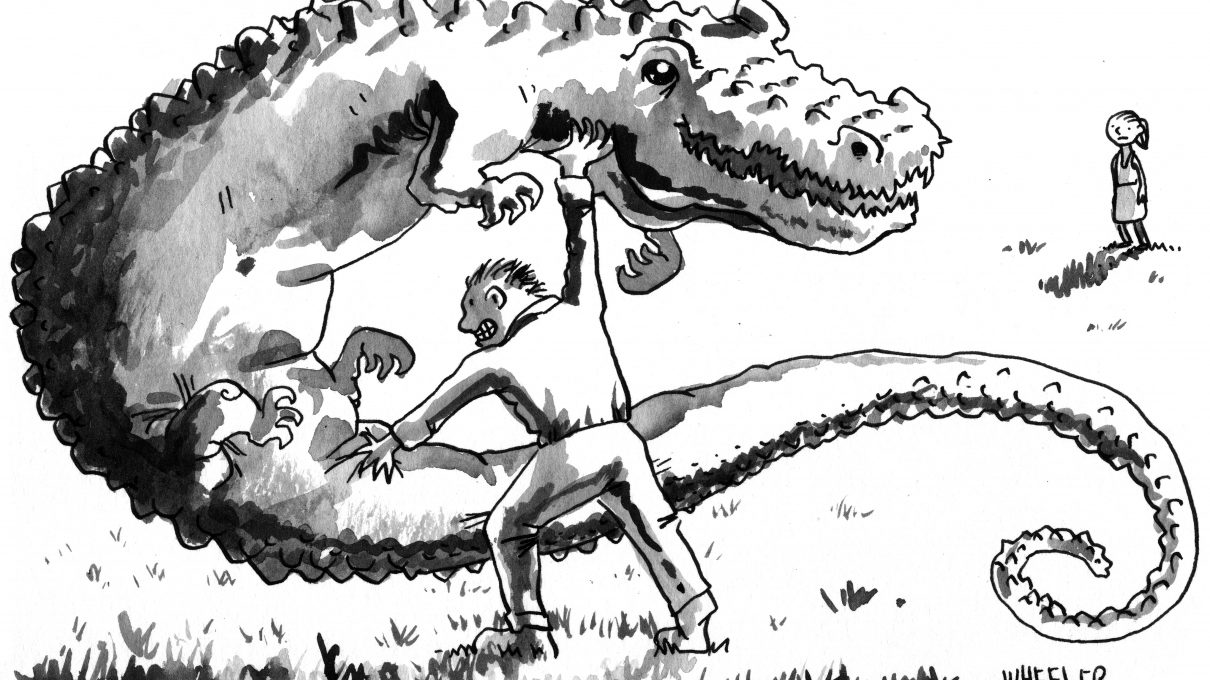 Whether hunting gators or surviving cancer, Ronald Guy is used to looking death down the throat.

Outside of gator country, the threat of giant, man-eating reptiles is something most of us only think about when watching Jurassic Park. But as the tragic death of a two-year-old in Walt Disney World last month shows, in America’s deep south, alligator attacks are very real… and very deadly.

Not every gator is a nuisance alligator. To earn that title in Louisiana, the dangerous animals must be more than four feet long and stray out of the swamps and bayous to directly approach or attack people. While it’s not a pretty job, someone has to protect lives in these dicey scenarios. One of those someones is Ronald Guy.

On the evening Guy discovered his life’s calling, a friend drove him to a small stream in the woods, 15 miles south of his home in Alexandria, Louisiana. “I didn’t know where we were going; I didn’t know what to expect,” says Guy, 57, of that day about two decades ago. At dusk, the two men strung a line of hooks across the stream. When they returned in the morning, they had caught three alligators weighing 80 to 100 pounds.

“I was all big-eyed about it because I had never seen anything of that size,” Guy says. “It was quite an adrenaline rush … You might be familiar with the basics on TV, but it’s nothing like holding that cord in your hand and pulling that alligator to you. It’s like jumping out of a plane—it’s against everything you’re taught. … Even at the time I remember thinking: What are we doing?”

A nuisance gator is an alligator over 4-feet-long that strays out of the bayous to directly approach people.

Guy’s interest was piqued. A carpenter at the time, Guy applied with the Louisiana Department of Wildlife and Fisheries for a license to become a nuisance alligator hunter. These self-employed contractors are able to hunt year-round to remove large alligators that are aggressive or violent toward humans or pets. The wait list was long. After Guy had waited six years to hear back, he gave up on the job. But then he got the call.

Even though it paid less than carpentry work, Guy loved it. He met new people on every gig. Unlike carpentry work, his callers were often elated to see him, the hero and slayer of the dangerous beast near their home. And then, of course, there was the thrill of the chase. “I’ve never enjoyed anything as much as I like this,” he says.

A year into his dream job, Guy was diagnosed with follicular lymphoma. “I was scared to death of what was to come,” he says. In 2008, a tumor was discovered in his back. So began the years of chemotherapy during the winter, scheduled around alligator season in the warmer months. Guy underwent several rounds of chemotherapy until December 2012, when he finally received a stem cell transplant.

I probably needed this 30 years ago when I thought I had total control over my life.

Though he’s been in remission ever since, Guy struggles with graft-versus-host disease (GVHD). His esophagus is swollen, making it painful to swallow, and he can’t eat the spicy food that defines Louisiana. As a result, he’s underweight by about 20 pounds. “I’m running out of gas sooner than I would have in my early hunting days,” he says. He regularly takes an immunosuppressant, which makes it even more dangerous to be around bacteria-infested alligators. He produces no saliva or tears, so he travels everywhere with plenty of water and eye drops—even on hunts.

And hunt he does. Nearly every day, he’s cruising to a catch in his truck, fully loaded with chicken or roadkill bait and his business manager—his wife, Terri. Recently, he caught an alligator that had eaten a family dog. The owners called Guy to protect their small children and two other dogs. “This is my thirteenth season, and I can still get up in the morning knowing I’ve got somewhere to go to that I really want to go to,” he says. “On this alligator job, it’s always a joy.”

Sometimes it’s a joy because of the stories that come out of a hunt. Once, an elderly gentleman called Guy because he couldn’t get to the newspaper on his porch—an alligator was pressed against his screen door. By the time Guy arrived, the oversized lizard had slithered down the street, and a swarm of neighbors were herding it with brooms.

Guy doesn’t always get to swoop in like the perfect hero. One particularly ornery nine-foot alligator near a family home was restless. Guy kept on dragging it out of the pond on the side of a house, thinking the beast was dead, only to find himself struggling with its squirming, heavy body. A young girl was watching from a distance. After Guy finally subdued the gator, she commented, “Mister, have you ever done this before?”

Just last year, Guy was bit by an alligator behind a high school. Classes were in session, so Guy was called in to protect the children from the deadly animal swimming in their sewer system out back. He was with his brother, who “gets flustered easily.” When they fished the 5’’6’ gator out of the water, Guy restrained it with his catch pole. He was about to tape the gator’s snout shut so they could euthanize it elsewhere. When he reached around, Guy realized he had just put his hand inside its ring of snaggly teeth. Suddenly, he felt the chomp. “It’s intense pain—he holds on really tight and the more you fool with him, the harder he bites.” But Guy didn’t scream, lest he startle his excitable brother or the kids gaping through the baseball field fence. Guy calmly asked for pliers from his brother, who couldn’t see that Guy had been bit. When he plied open the gator’s jaws, six puncture wounds gushed blood.

“With my condition, that’s all that raced through my mind: death,” Guy says. “I look at everything through a stained glass.” With his compromised immune system, the water from the sewer system, and the highly infectious bite of an alligator, Guy was terrified. But thankfully, the right antibiotics saved his life, and he didn’t back down from his day job.

With my condition, that’s all that raced through my mind: death.

To make his living, Guy skins the nuisance gators in his backyard and sells the skin. (The state doesn’t pay him to remove the animals, but simply grants his special license to catch troublesome gators. In certain southern states, such as Florida and Louisiana, nuisance alligators are killed rather than relocated because they are likely to either return or become a threat to life in their new spot.) The market rate for gator skin is about $23 for a foot of skin, though Guy says he commands a higher rate with his refined skinning skills. The meat goes to family and friends for their home cooking.

Lately, Guy’s pay has taken a nosedive with the declining market for alligator skin. Still, Guy adores his job. His body has weakened considerably with his GVHD, so much so that friends often mistakenly suspect his cancer has returned. But Guy has modified his job. Instead of dragging an alligator into the boat, he’ll subdue it when it’s still in the water. He uses pulleys to lift it up, instead of his atrophied back. He relishes everything more slowly these days, from hunting to eating.

“Now, I’m not in a hurry to get to the end of anything,” Guy says. “I probably needed this 30 years ago when I thought I had total control over my life.”

Terri cuts in to deadpan: “He still tries to be in control.”

“Life’s pretty good,” Guy continues. “I can’t fuss about it. My hope is that our alligator market will rebound, and everything else, we can live with.”

All illustrations by Shannon Wheeler.

Jennifer Furner
Do you know someone else who would enjoy this story?
Not Your Ordinary Santa Claus

The Girl With The Beautiful Photographs
Don’t miss one more amazing story.
Every week, we’ll send a few of our favorite stories to inspire you.
Send this to a friend
Scroll to top