For both artisans and consumers grappling with chronic illness and mental health issues, the world of miniatures has become a healing refuge.
depressionptsd 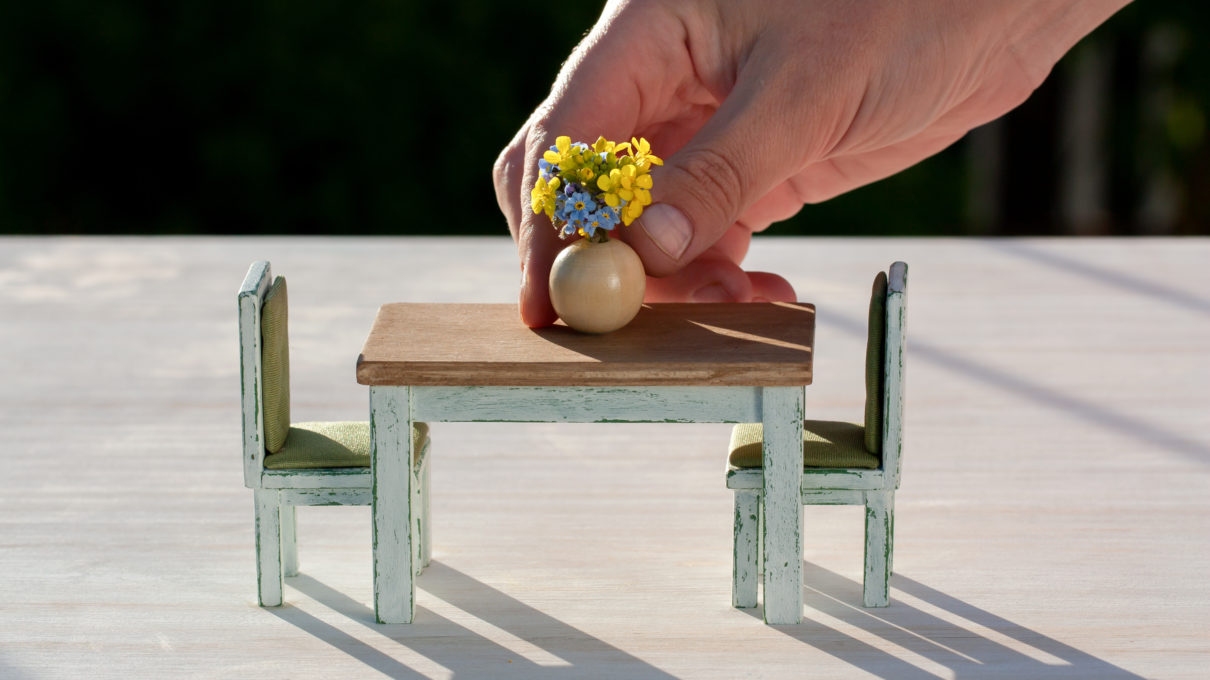 “I find broken, messy things beautiful,” says Allysson Emery, a petite 32-year-old better known in the world of miniature collectors as Ally Kat. “If you look close enough, something that would have otherwise been discarded can be given new life.”

Giving new life to the discarded is just what Ally Kat does. As a professional dollhouse furniture refurbisher, it’s her way of earning a living and taking care of her health, too. She suffers from PTSD and severe anxiety after surviving a rape at age 13, then later an abusive first marriage.

“I am riddled with anxiety and grief,” she says. “But I do believe that, with a lot of hard work, it can be channeled in a positive way.”

For Ally Kat, the way lies in painting, upholstering and making. She works primarily in the most common miniature scale, 1:12–meaning that one inch of tiny furniture equals one foot (12 inches) of the real-life version. Narrowing the world down this way helps her, she says, by “calming nerves, sorting through thoughts that would otherwise consume me. It allows me to focus rather than be overwhelmed by the large picture all at once.”

She sources broken, boring, overplayed-with furniture from miniaturists’ sales and groups on Facebook. Once she has a piece in hand, she says, it chooses its own new look—layers of paint for an antique effect, upholstery fabrics featuring prints of colorful flowers and birds. Her peacock-themed sofas and chairs, especially, are snapped up as soon as she lists them for sale, and her customers are often the very same people from whom she purchased the original pieces.

Ally Kat’s story of healing through miniaturist work is one of many. From master craftspersons to beginning hobbyists, a growing number of people of all ages who suffer from depression, anxiety, and even chronic physical pain are finding that dollhouses offer, quite literally, a space in which to heal.

Focusing on a Way Through Trauma

The miniaturist hobby is more popular than ever, and it is accessible at all skill levels and budgets. Some people spend thousands on a dollhouse, then even more on furniture to fill it; others make homes from cardboard, papier-mache clay, Q-tips, bottle caps, and other humble materials. The typical hobbyist probably builds their own dollhouse and makes at least some of the pieces that go inside.

Master craftspeople belong to the International Guild of Miniature Artisans (IGMA), but there are many more democratic organizations on the local level and across social media, including YouTube–just search on any sort of house element or object that interests you, then add “how to” and watch the videos queue up.

All skill levels converge on Facebook. The site hosts dozens of groups for miniaturists with varying interests. Most are private but open up readily to newcomers who answer a few questions–try Dollhouse Miniatures Tutorials and DIY, a huge group of almost 35,000 members who share tips and advice; Miniature Dollhouse Show and Tell; Dollhouse Miniatures made from Trash to Treasure; and Micro Miniature Dollhouses , for people who like really tiny homes. Many other pages and groups host sales.

No matter how much of it you build yourself, a miniature house can be a valuable tool for recovery from stress and trauma, says master craftsman Randy Hage . A superstar in the miniature world, Randy has done everything from models for movies, television and books to exhibiting his hyper-realistic work on both coasts in galleries such as Thinkspace (Los Angeles). But some of his most satisfying work has been building mini houses for people making tough transitions in life.

He has made several dollhouses for psychologists working with abused children. “It seems that a child is more willing to act out an issue with dollhouse dolls rather than discuss it or answer questions,” he notes.

“A child is more willing to act out an issue with dollhouse dolls rather than discuss it or answer questions.”

Dollhouses and single-room boxes can also help people transitioning to another phase of life. When Randy and his parents owned a miniatures shop, they catered to seniors who were giving up a lifetime’s worth of possessions to enter assisted living. Bringing miniatures along let them create personalized homes that helped stave off depression, loneliness and grief as they lost loved ones.

Almost any miniaturist you talk to has also made a house or room box to commemorate the birth of a child, a graduation, or (most often) a death, whether of a family member or a beloved pet. “My grief was unspeakable,” says Brigitte. “So I ‘spoke’ about it by making a little home where my friend and I could still visit in spirit.”

Even Randy attributes some of his strongest work, faithful reproductions of vanishing New York City storefronts, to his need to lose himself in a project after the death of his five-year-old daughter. He says, “Focusing on my work, sometimes to an obsessive level, was a way to keep my mind busy and attempt to maintain forward movement in my life.  Everyone finds a different way to cope, and creating miniatures let me express myself, be creative, and work toward a time when a semblance of normal life could be possible again.” He has donated profits from his artwork to children’s cancer funds.

Miniatures can also help with what people perceive as more purely physical health issues. For example, painter Rebecca M. J. Hymes sells her mini landscapes, seascapes and fantasy scenes to clients all over the world … and for a long time she did it despite severe glaucoma and cataracts. She calls her paintings  “little pieces of paradise … an escape from reality” that bring joy to herself and her customers in images about the size of a postage stamp.

It took a while to find a format that would both highlight her talent and turn her disability into an element of her painterly style. When she was in art school in her native England, she was criticized for overloading her large works with detail. But on eBay she discovered ACEO’s—“Art Cards, Editions, and Originals,” small original paintings 2.5 inches by 3.5—and felt she’d come home to a form and a format in which her love of detail would be  appreciated.

Becoming a professional artist still wasn’t easy. For a long time, Rebecca’s eye problems were so severe that she couldn’t see well enough to cross the street or recognize faces. She says her signature style developed as she learned to work within her disability. Even wearing thick glasses, she needed to paint from up close because of extreme nearsightedness and blurred vision. She would make several similar pieces at once, because “it helped if I added texture with paint so I could work out where the sky and sea were.”

The minute level of detail that her former professors criticized became a strength to people who love miniatures. Now living in Orlando, Florida, with her husband and two children, she says, “I can paint large pieces with lots of detail too; I just choose not to.” Miniatures have created her happy place, and her most creative one.

Closing the Door on Pain

For many other sufferers of chronic or acute conditions, a dollhouse is a pain-free zone. Some of them say that the fine-tuned focus on miniature work seems to reroute certain signals to the brain. Hobbyist Mary Wern, who has rheumatoid arthritis, puts it succinctly: “Working on my dollhouse makes me forget my pain.”

Patt Barker was diagnosed with an aggressive form of cancer last year. Since then, she has been focusing on her small dollhouse world as an escape from her pain and says, “My mini friends are helping me fight.”

That’s also the situation for Mark Ceal, who is fully disabled due to a double-whammy of fibromyalgia’s systemic pain plus encephalopathyan assortment of neurological conditions that defy easy description but that his doctor has called, for lack of a more specific explanation, a “brain catastrophe.” A 50-year-old living in Tempe, Arizona, Mark is enamored of Old World country houses and antiques; his miniature project is to create a grand English manor. It lets him imagine his way into another life and helps cope with his daily pain.

Mark lives on a careful budget and is making detailed plans for the mansion before investing the money in building it. He uses 3D computer imaging to design everything from receiving rooms to servants’ quarters, plus an elaborate backstory about the evolution of both the house and the family that lives there.

“My miniature work occupies my mind such that I don’t notice the pain so much.”

“My miniature work occupies my mind such that I don’t notice the pain so much,” he says. “The computer program lets me be involved in my miniatures without asking too much of my faulty body.” He constantly redesigns the rooms as he acquires a piece or two to put inside every month, changing a detail here and there. He buys high-end pieces, seeing his mini-mansion as a long-term investment in his health, and he says, “I do hope that within a year or so I can begin in earnest.”

The long-term benefits of miniature work can be surprising, and so profound that even after the first need for a health boost has passed, people stick with it.

For example, painter Rebecca M. J. Hymes  recently had cataract surgery, and for the first time in years she can see the detail of her own paintings in full. She says she marvels at the shapes and colors around her. She still needs glasses and drops for the glaucoma—but her surgeon was able to tailor her new glasses to her painting style and scale, keeping continuity in her art form.

That continuity is crucial for preserving Rebecca’s physical and mental health. Her painting keeps her blood pressure low, which in turn keeps eye pressure down and defeats the glaucoma. “If things get stressful or busy, I get my paintbrush out,” she says. “It has an instant way of calming me.”

“If things get stressful or busy, I get my paintbrush out,” she says. “It has an instant way of calming me.”

The disease may take her sight away someday, but meanwhile, “I will appreciate each painting I create and keep on painting until I can’t.” She plans to build a mini beach house for the paintings she’s kept.

Miniatures gave trauma survivor Ally Kat a happy ending too. With her artwork helping her gain confidence and heal from PTSD, this past summer she worked with authorities to catch the man who molested her and at least two other girls.

The prosecution is ongoing, and so is Ally Kat’s healing. She still experiences “endless anxiety”—but with each mini project she undertakes, she is improving her resilence and her overall health.

Miniatures have given her the relief and confidence she needs. Of this new phase in her life, she says, “I feel incredibly powerful.” 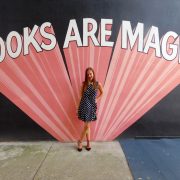 How One Bodybuilder is Normalizing Autism in Strength Sports
Don’t miss one more amazing story.
Every week, we’ll send a few of our favorite stories to inspire you.
Send this to a friend
Scroll to top