Drawing Out The Weirdness 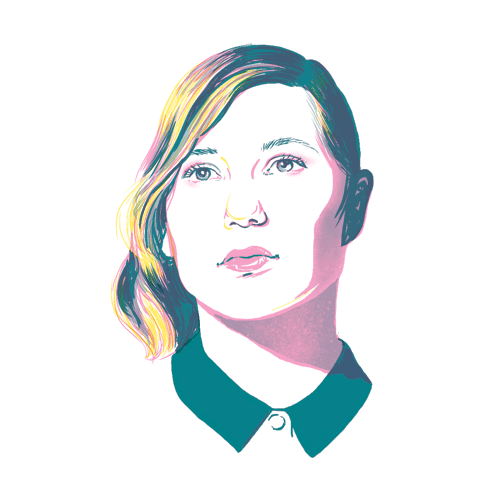 Illustrator Gillian Goerz belts out Britney Spears at karaoke bars across Toronto, and she does it like it’s her job. In a way, it is. With a group of friends, Goerz has started “Camp Karaoke,” a regular goofy evening where she and her buds dress up like camp counselors vaguely in the style of Wet Hot American Summer. To spice things up, Goerz keeps an “embarrassingly long” list of about 60 karaoke songs in her phone.

“When you spend all day hunched over a desk, to sing at the top of your lungs is a great way to balance it,” she says. “It lets me scratch the performance itch, while not requiring me to be a professional actor.”

A woman of many interests, Goerz has found a way to monetize most of them. At the University of Saskatchewan, Goerz studied fine arts and drama (she confesses to being “a natural show-off.”). However, she eventually wrote off theatre as a career option. “In my mind, I may have shut the door to acting to some degree because I thought that—physically—I don’t add up to the standard Hollywood would require,” she says. “TV doesn’t allow for irregularities that sit out of a certain norm.” 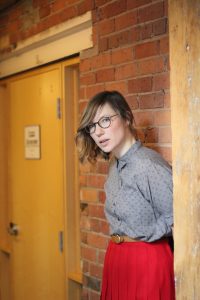 Born with a ventricular septal defect (a hole in her heart) that naturally closed after five years, Goerz very nearly died when she was born. She survived intact with relatively small, interesting hands.

Now a professional, independent illustrator whose hands are central to her identity and bank account, Goerz has worked with high-profile clients like Johnson & Johnson, The Walrus, Globe and Mail and the Canadian Encyclopedia. “I actually feel whatever physical irregularities I have going on have been an advantage for me,” she says. “My left hand is maybe not the most useful thing in the world. I have average-sized thumbs but short fingers, and it makes a better connection for pen holding. The pointer finger on a normal person is jacked up when they’re controlling a pen.”

After a pause, she adds, “This is a fictionalized history of my own body; it’s probably absolute bullshit. You have to mythologize your own body weirdnesses to make sense of them.”

You have to mythologize your own body weirdnesses to make sense of them.

Goerz sees the world in technicolor, often describing things as “magic.” With the straightforward and bold style of a cartoonist, she draws strong women with their sleeves rolled up, puffing on cigars. She captures the prismatic diversity of Toronto, with chilled out girl gangs and their own “body weirdnesses.” Thanks to her fine arts background, she depicts the soulful essence of faces with a complexity appealing to adults. But she also uses her arsenal of comics influences to be approachable and lively enough for children’s books.

In her childhood home, Goerz drew on a chalkboard that left a trail of chewed up drywall as her parents continually re-drilled it for each growth spurt. She read the confessional cartoonist Lynda Barry “at maybe way too young of an age.” Those weird, wonderful graphic novels expanded her worldview beyond the Betty and Veronica cartoons. (“These women have huge knockers,” Goerz deadpans. “Baking cookies and wearing more and more revealing outfits, that’s their technique to win a man—it’s enough to make you puke now.”) In contrast, Barry depicted ugly people and dark, revealing situations. “It was nice to see less than idealized images of human beings.”

In college, her fine arts major didn’t click at all. “I couldn’t stomach talking about my own art, and for better or worse, I’m a very practical person.” So Goerz spent time convincing herself she couldn’t make a living in the visual arts. She tried “the gamut of crappy jobs”: barista, social media and advertising copywriter, retailer at a clothing store, part-time actor. As a waitress, her arms would ache after a day of carrying trays because so much pressure balanced on her fingers. She quit without notice because she was in so much pain. “I’ll never be a physical labor person,” she says. “If friends are moving, I’ll help them clean their house, but most of the weight is on my fairly short fingers, and if I injure my fingers, it’s part of my job—I need to use my hands. So I need to protect them.” 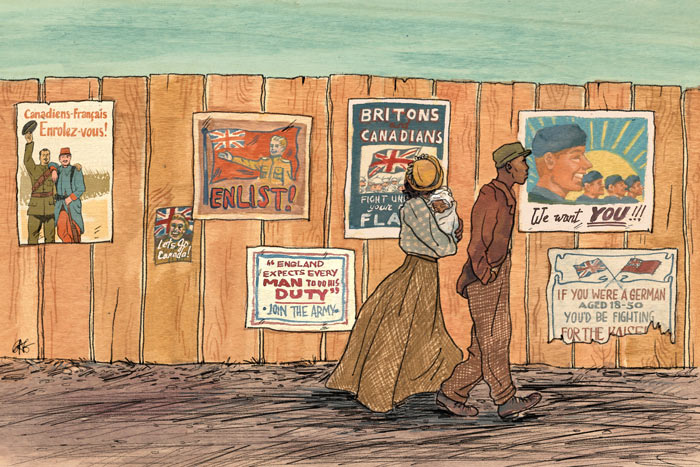 As a yoga studio assistant, she was uncomfortable taking advantage of one of the major perks of the job: yoga classes. “You had to plant your hands on the ground in a way I could never do,” she says. “If it’s a new teacher, do I have to say that the reason I can’t do that? Do I have to have that conversation in front of everyone in the class? … That’s one of the more exhausting aspects of any physical irregularity is having to constantly have that conversation or explain what, air-quote, ‘normal’ people can do.”

Finally, she connected the dots between her childhood love of cartoons and the potential for a job as an illustrator. Goerz went back to school to get her bachelor’s in illustration and design. Then, she met one of her heroes: Canadian graphic novelist Mariko Tamaki.

Tamaki was finishing a story that her usual collaborator was unavailable to illustrate. “She was able to hand off her script to me–an untested friend of a friend–to foster somebody new,” Goerz says. “That was pretty inspiring. It’s a glimpse into how somebody who is a creative success can be not a snob and funny and generous.”

As a result of the editorial bylines that Tamaki helped her snag, Goerz has leveled up in her career and spread her own generosity back to her hometown of Toronto. She’s illustrated badass women in Mothers of Confederation for the Canadian Encyclopedia to inject some fun into history, a subject that, to her, seemed boring growing up. And… drumroll… she just got grants from the Ontario and Toronto Arts Councils to write and draw her own YA graphic novel: Shirley Bones. The remake of Sherlock Holmes follows two nine-year-old girls as they traipse through the multicultural cityscape of Toronto, a place often neglected by pop culture at large. And she gets to rewrite the Betty and Veronica script of her youth. 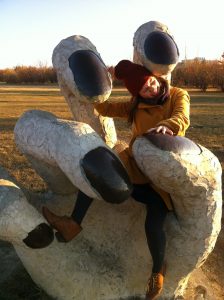 Squeezed by the hand.

“There are themes of bravery, adventure and allowing yourself to do what you want to do with your life even if it conflicts with the external ideas in your world.” But above all, it’ll be funny. “Messages are better communicated through humor than anything else; you can be disarmed, and it can weasel its way into your brain.”

She’s fairly confident the manuscript will sell, “which is terrifying,” she says. “There’s a fear to see a pipedream materialize into reality.’” This summer, from her gritty studio (“It smells like garbage juice, but it’s worth it,” she says.), Goerz will overlook the dense dizziness of Chinatown and beyond to see a panoramic view of her beloved city. She’ll transform Toronto into an enchanted world for the rest of us, but the illustrator already sees it that way. “It’s grimy and awesome and not completely sanitized,” she says. “That’s its magic.”

With her career on the up and up, Goerz is moving into her first solo apartment as an adult. She plans on creating a bookshelf full of the Young Adult and sci-fi titles she loves, including Ray Bradbury, Isaac Asimov and J.R.R. Tolkien. Mostly, she plans to deck out her kitchen with herbs.

“I really do love to cook,” she says. “Last night, I made chicken with cilantro, salad broccoli bacon and tomatoes cooked in bacon fat and green onion avocado. I like a lot of weird salads. I like to take whatever’s in the house—I might like two or three different recipes and pull the inspiration and make up my own thing.”

This is one passion that she doesn’t want to turn into a career. “It doesn’t have any stakes. I’ve managed to monetize the things I love: drawing, karaoke. Cooking is something I don’t have interest in monetizing. You get to enjoy the rewards of it, and that’s it, and you can share it with friends.” We’ll see if that lasts for long.

Nicole Slaughter-Graham
Do you know someone else who would enjoy this story?
The Diabetic On Third Base

Building His Plane In Flight
Don’t miss one more amazing story.
Every week, we’ll send a few of our favorite stories to inspire you.
Send this to a friend
Scroll to top