Two years ago, Kate Montgomery was ashamed of her looks and could barely get out of bed. Now, she's the strongest and sexiest badass at the gym.
athleticsCrohn's Disease

Wearing a t-shirt that says Wild Feminist, a massive smile, and a tiny silver dumbbell around her neck proclaiming “Me vs Me,” Kate Montgomery is no one’s picture of chronic illness.

The 34-year old was diagnosed with Crohn’s Disease at 22. The necklace is a description of the power play between herself and her body; a fight she’s come close to losing multiple times.

Kate has spent much  of the last decade in the  hospital, suffering through dangerous infections, four surgeries, and dangerous weight loss.

Up until May 2015, she weighed around 92 pounds. Unable to eat, she was fed through a tube directly into her chest. She couldn’t get out of bed unassisted.

The Kate of today is a different story.

Two years ago, her doctors made a devastating decision that probably saved her life: her large intestine needed to be removed.

Having already experienced a temporary ileostomy–where her bowel was rerouted and attached to her stomach wall so that waste emptied into a colostomy bag–Kate was shattered by the news.

While the procedure removed five feet of intestine from her body, it essentially removed her disease. But she says it also shredded her self-esteem.

“I thought no one would ever be attracted to me again when they found out about it. I was ashamed of it, it just mortified me. I would cry just thinking about it.”

But now, Kate says she’s the healthiest she’s ever been, and the ileostomy no longer upsets her as it once did.

“It’s strange to think about feeling bad about it, because I’ve done a huge amount of work on being okay with me, and I don’t really care anymore. I’ll tell people and explain it.”

The years she spent battling the disease have made her strong both physically and mentally. Under advice from her physician, she started to weight train in order to fix her bone density.

“The medication I was on affected my bone density, and overall I was left very weak,” she says. I’d never weight trained before so I didn’t know what I was doing! But I love it now.”

“Regularly pushing myself in the gym doesn’t feel that hard, really. I know how mentally strong I am from surviving months in hospital and years of being bedridden, and constant pain. After my last surgery they took away my epidural really early but hadn’t added extra pain relief to replace it, so I could feel the full force of having been cut open days before. I had to get through about eight hours counting in 5 second intervals, like get through this five seconds, then the next five. Knowing I survived that means I’m already confident I can handle anything in the gym. Nothing will ever will ever be worse than that day.”

Kate says the strength that comes from weight training comes first, but being able to look in the mirror and like what she sees is also hugely important.

Why should I have to feel like this illness that has left me so scarred–figuratively and literally–makes me any less beautiful or worthy than anyone else?

“Having positive self-image is constant work. I’m very lucky in that I became well enough to work out and lifting weights has changed my body, in terms of my strength and my shape,” she says. “But I definitely don’t look like a Victoria’s Secret model – I have broad shoulders, strong arms and narrow hips, and I’ve always been self-conscious of that. It’s just been a process of deciding to not feel bad about that anymore and own how I look and constantly correcting my thoughts when I feel bad or say mean things to myself.”

“I got sick of being ashamed. Sick of feeling like there was something wrong with how I looked. I decided that needed to change. Last year, I just decided to stop feeling like that. It’s not an overnight process, but I’ve worked at it every day. Because why should I have to feel like this illness that has left me so scarred – figuratively and literally – makes me any less beautiful or worthy than anyone else?” 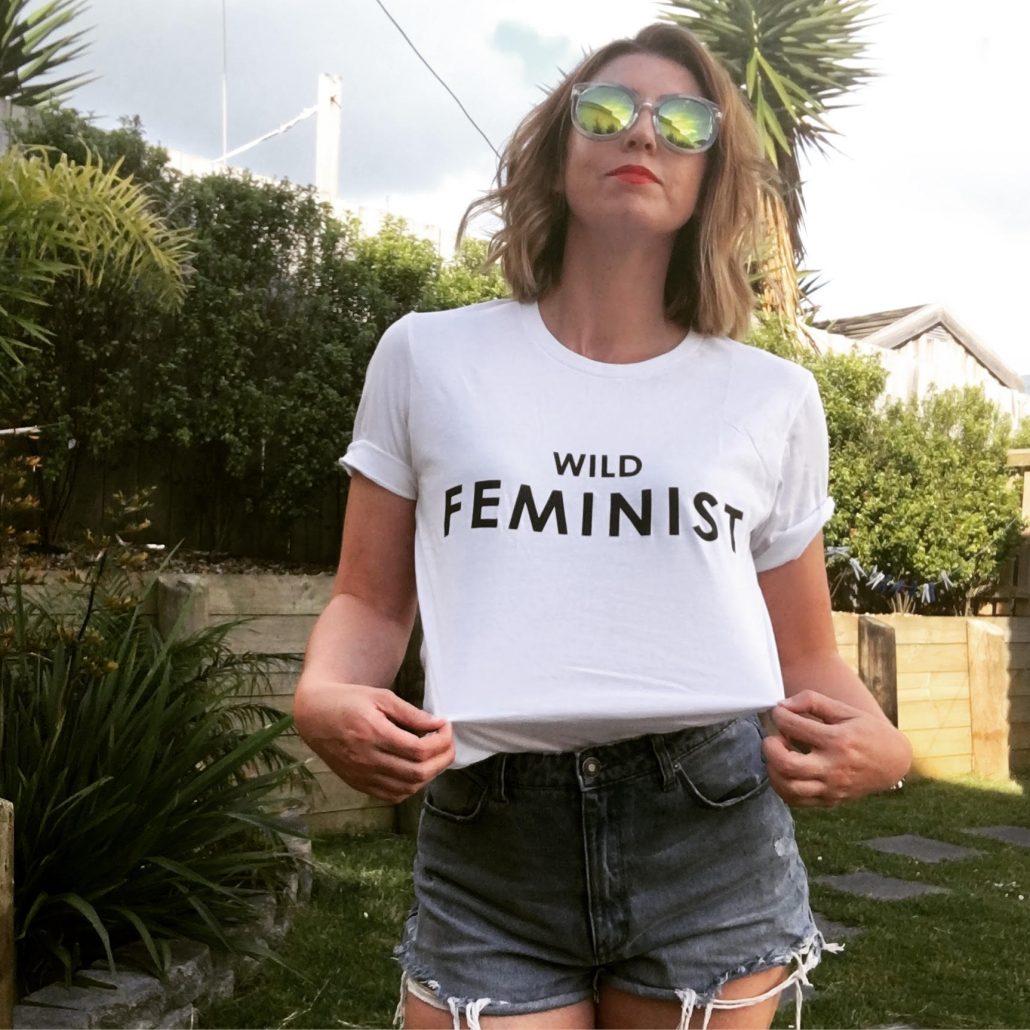 “I got sick of being ashamed. Sick of feeling like there was something wrong with how I looked.”

Kate says being a feminist also played a big part in making these changes.

“Part of feminism is being body-positive, about women of all shapes and sizes. And it’s hard to be an advocate for that if you’re really not positive about your own,” she says. “One of the biggest blessings of being sick and recovering is not giving a fuck how much space my body takes up anymore. I used to feel bad about being taller and broader than most of my friends; women are taught by society to take up as little space as possible. After you’ve literally taken up as little space as your skeleton allows, taking up more space feels defiant. I love it. It’s a blessing to learn you’re entitled to take up exactly as much space as you need to in this world, with your size, or your voice.”

Kate’s going back to school this year to study psychology. She wants to be able to share the knowledge she’s gained from being sick, and to put that into practice helping others with chronic illness.

“I think my experience will make me better able to help and relate to people,” she says.

One of the biggest blessings of being sick and recovering is not giving a $%@! how much space my body takes up anymore.

“Chronic illness isn’t a normal part of life and I believe everyone who has it would benefit from professional help to cope with it, mentally. My therapist has changed my life in terms of my ability to accept and cope with what Crohn’s has thrown at me, from the day to day stuff, to the big things like hospital and surgery. Having the temporary ileostomy previously meant I could directly compare how shattered that left me, with how well I’ve coped now, and the major difference is the therapy I’ve had. I’ve done all the work, and I’ve worked damn hard. I want to be able to do that for other people.”

Kate says she’s now in a ‘weird limbo’ where she’s not really sick anymore. But she constantly reminds herself how hard she’s worked to earn her health.

“I don’t have pain anymore, so I feel weird sometimes saying I have a chronic illness or putting myself in with people who are still grinding through their days, but I’m also not well, and I have to be much more careful about my health than ‘normal people’. But I feel guilty talking to other sick people sometimes, because I’m so much better. I have to remind myself that I deserve to enjoy being better, that I’ve earned it, and that I’ve sacrificed and lost a lot.


“I’m allowed to just be grateful and happy that I’m here now.”

The Adopted Artist With Her Head In The Clouds
Don’t miss one more amazing story.
Every week, we’ll send a few of our favorite stories to inspire you.
Send this to a friend
Scroll to top