Sometimes a diagnosis isn’t the end of the world. It’s just the beginning of a better one. 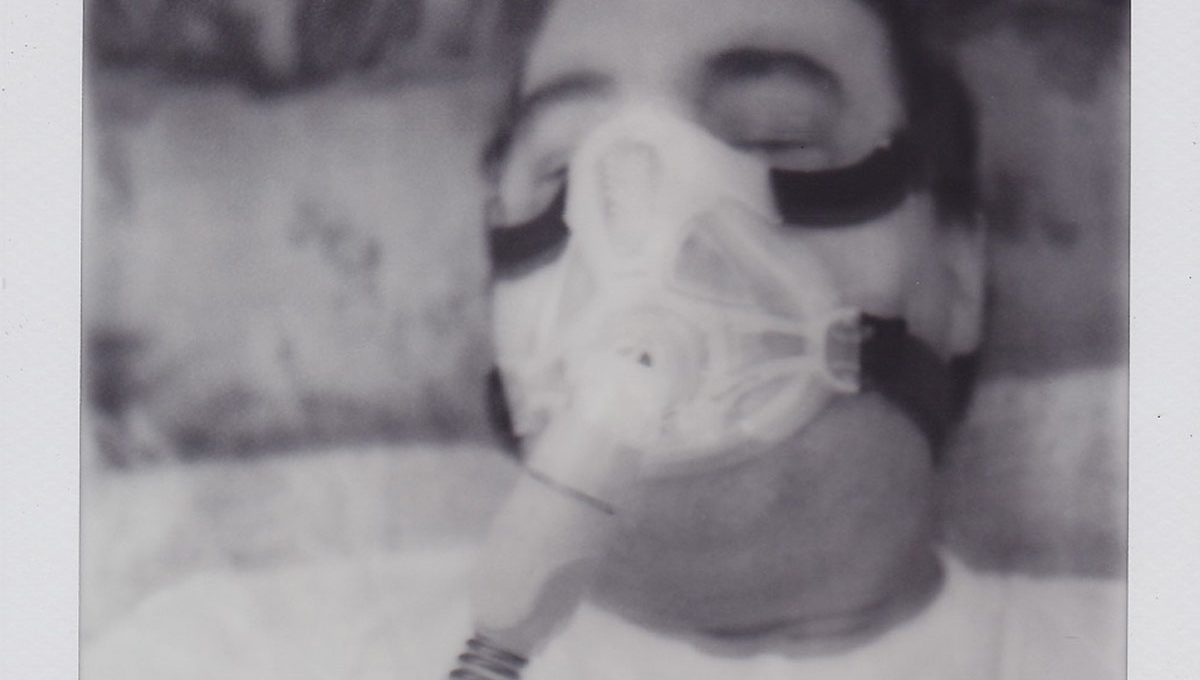 I snore. Loudly and lusciously.

When I inhale, it is a heaving rumble, like the unseen collapse of a vast underground cavern. When I breathe out, it is a shrill whistle: the sound of a faulty pressure cooker at its disintegration point. Imagine the loudest possible sound you think a human throat can make; I guarantee you I snore louder. In Calvin and Hobbes, Calvin once described his father’s snoring as sounding like “trucks downshifting on the highway”; my snoring is like someone on a highway overpass sniping at those trucks with a bazooka.

I don’t really know when I started snoring. A few of my earliest girlfriends casually mentioned it, but with none on the shock and awe in their voices that later cohabiters would use to describe my sleeptime snortings. The first person who really made a big deal of it was my wife, back when she was just my girlfriend. She said she’d never heard anyone who snored as loudly as I did. When I accused her of exaggerating, she secretly recorded me one night, and played it back to me in the morning. At first, I mistook it for audio from the Hindenburg Disaster. All it was missing was Herbert Morrison: “Oh, the humanity!”

To please my now permanent bedmate, I tried snoring strips. A total waste of money: you might as well have used a piece of scotch tape to ground a jet engine. I tried sleeping on my stomach: it just made our mattress a Magic Fingers. Eventually, my wife just started plugging her ears, but even then, it wasn’t uncommon for me to wake up in the middle of the night to the sensation of a phantom palm striking my chest. “Pleeeeease….” my wive would moan next to me, exhausted and exasperated. “You’re snoring. AGAIN.”

She was the one who first suggested that I might have sleep apnea.

Untreated, sleep apnea deprives oxygen from the brain and heart, leading to strokes and heart conditions.

Sleep apnea is a disorder where your breathing pauses or even stops when you’re asleep. Its most common form, obstructive sleep apnea, is characterized by throat muscles which collapse while you sleep, resulting in snoring. It’s estimated that around 22 million Americans have sleep apnea, so it’s fairly common. It tends to run in families, it effects men more than women, and it’s more common in the overweight than the ectomorphic.  About 80 percent of people with sleep apnea are undiagnosed, which can be deadly. Untreated, sleep apnea deprives oxygen from the brain and heart, leading to strokes and heart conditions: it’s believed, for example, that Carrie Fisher and U.S. Supreme Court Justice Antonin Scalia’s deaths last year were both related to sleep apnea.

Sometimes, an idea makes intellectual sense a long time before it makes emotional sense. You might know, for example, that you shouldn’t drink a pot of coffee every morning and a bottle of wine every night, because it’s bad for you, but hey, you feel fine, so how bad could it really be? So when my wife suggested I get checked out for sleep apnea, intellectually, I saw the logic. I’m an overweight guy with the worst snoring anyone’s ever heard who is also the son of someone with sleep apnea. Of course I should get checked out. But I put it off for almost eight years, because, hey, I was high functioning. Sure I liked to nap, but it’s not like I fell asleep at the wheel or anything. I was totally functional. Right?

Then my Dad died of a sudden heart attack.

I didn’t recognize it as the time, but his death was the catalyst for me to take a bunch of things seriously about my health. I cut down on my drinking, started taking my medication more regularly, and finally mentioned my snoring to my doctor, who ordered a home sleep study. A week later, I went to bed hooked up to a random assortment of cathodes and tubes, as well as a small computer strapped to my chest. I slept soundly, which worried me: when I dropped off the equipment at the hospital the next day, I explained to the technician I’d smoked some pot the night before, which always makes me sleepy. Maybe it would cause a false negative? She assured me she didn’t think it would matter.

My cognitive dissonance was, in retrospect, hysterical. When the sleep lab finally called me with the test results, I expected them to tell me that, at worst, I had the mildest of mild sleep apneas. “Barely worth treating, really, Mr. Brownlee, but if it makes you feel better, maybe we can prescribe something.” Instead, the sleep technician addressed me in the reverent tones you might use when addressing a Sleep Apnea God. She told me I had the worst sleep apnea she’d ever seen. Sleep apnea is measured in terms of “events”, or recorded instances when breathing is stopped or disrupted as you sleep. If you have less than five events per hour, you’re normal; 5 to 15 is mild, 15 to 30 is moderate, over 30 is severe. I, the guy who didn’t think he had sleep apnea, stopped breathing an average of 65 times per hour. And this was on a night I had woken up feeling well rested!

I, the guy who didn’t think he had sleep apnea, stopped breathing an average of 65 times per hour.

If my own energy stores were a laptop battery, it would be swollen and distended; the kind that the tech barista at your local Genius Bar takes one look at, whistles, and issues you a free replacement on the spot. How could I have not recognized that something was wrong?

Even now, this is a question that is hard for me to answer. I suspect that’s why so many people with sleep apnea go undiagnosed: it happens so gradually, it’s easy to mistake with just getting older. But with a diagnosis in hand, I realized that, for years on end, I’d woken up more tired and irritable than the day before: there was no daily task or chore that did not require an inner heaving of willpower to accomplish. Every day, I despaired at how much I had to do, and how little energy I had to do it; I’d been depressed for years. Yet I wasn’t able to recognize any of this for what it was.

If I was getting more tired, and accomplishing less with every given day, I had subconsciously classified it as a character failing, not a medical condition. The truth was, though, that it was only the strength of my character and the depth of my willpower that had allowed me to be as high-functioning as I was. Without those reserves to draw upon, sleep apnea would have destroyed me.

Now diagnosed, I was finally able to get treatment, in the form of a CPAP machine. This dandy little gadget is basically an air pump attached to a mask that keeps your airways pressurized, so they don’t collapse while you sleep. For a few decades, they looked something like Darth Vader’s snorkeling gear–loud and ungainly–which is why my father didn’t use his, but the new wave of CPAP machines are different. Super quiet, the smallest machines are scarcely larger than a paperback book; mine, still very portable, is the size of a toaster. The masks, too, have gotten more comfortable: some apnea sufferers can get away with wearing just a couple of small noseplugs at night. I’m not that lucky, but my mask–the AirFit F20, which has a lovely memory foam cushion–is extremely pleasant.

Thanks to my CPAP machine, I’ve gone from waking up 65 times per hour, to less than 1. It has literally changed my life. Because you know what’s better when you sleep soundly through the night? Everything.

You know what’s better when you sleep soundly through the night? Everything.

Before my CPAP, I was constantly overwhelmed and anxious. Every day was spent in tension, as I juggled my limited stores of mental and physical energy against the ever-growing pile of things that needed to be done. I hated myself; sometimes, I blew up, smashing my mouse angrily against my computer desk until it broke because of some small setback that, to my sleep-starved mind, seemed utterly insurmountable. But now, I wake up in the morning, refreshed. My depression and anxiety have vanished. Life no longer seems too much for me. I have plenty of energy to do what needs to be done, and if things don’t get done? I can accept it. I don’t hate myself for it. Oh, and my wife now gets to sleep soundly through the night too.

Imagine if there was one little thing you could do that would make everything in your life better. That’s what finding out I had sleep apnea was for me. I feel no shame about it, no stigma: managing sleep apnea is just another part of my life now. Like many conditions, the fact that I live with sleep apnea doesn’t make me weaker. It proves the strength of which I am capable. If you snore, get tested, no matter how you otherwise feel. A sleep apnea diagnosis can be the best thing that ever happened to you. It certainly was for me.

Meghan Beaudry
Useful Resources
Do you know someone else who would enjoy this story?
Making A Baby When You’re Queer

Sex Ed With Brain Damage
Don’t miss one more amazing story.
Every week, we’ll send a few of our favorite stories to inspire you.
Send this to a friend
Scroll to top