Born with one arm shorter than the other, Mark Chaffer found love and acceptance in weightlifting.
Erb's Palsy 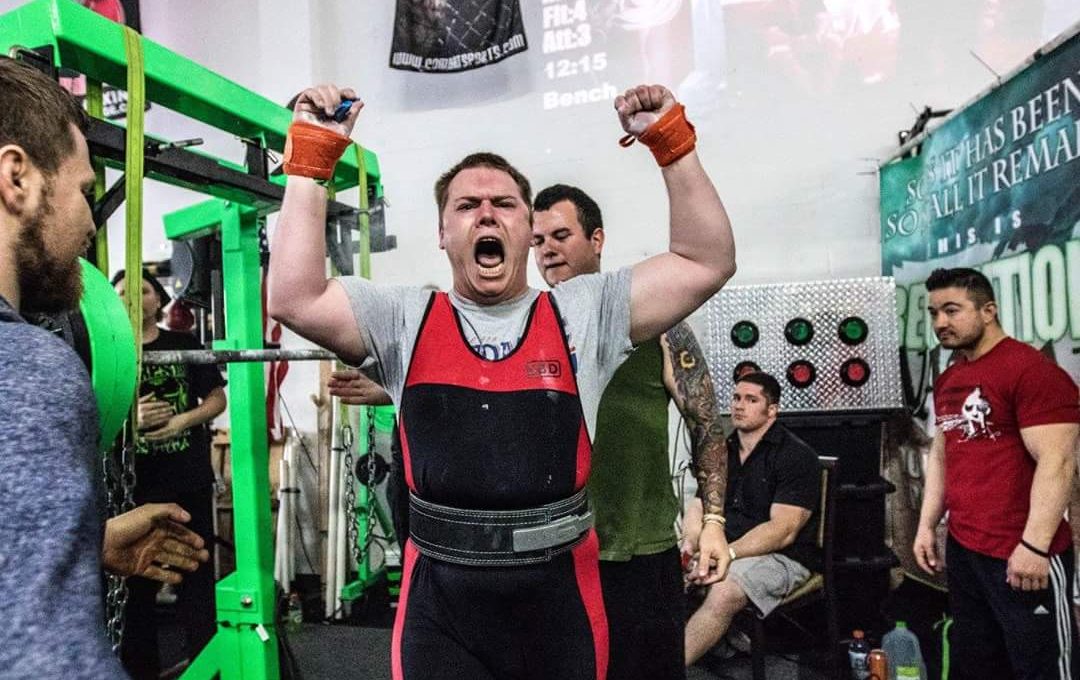 Like a true athlete of the 21st century, Mark Chaffer met his girlfriend  just where you might expect–Twitter. Haley Deutsch was trash talking Chaffer’s favorite hockey team, the Washington Capitals, and their teasing friendship grew from there.

One day, Deutsch tweeted that her date had stood her up. Coincidentally, the same thing had happened to Chaffer that night. They decided to correct the karma in the world by going out with each other, to an outdoor screening of Top Gun at a local Baltimore brewery. 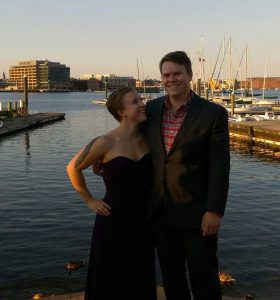 In Deutsche, Chaffer not only found a romantic interest. He found the motivation to transform his life through powerlifting.

Before meeting , Deutsch, the well-rounded sportsman had played lacrosse, soccer, cycling, baseball, football… and messed around aimlessly at his college gym. But nothing felt quite right.

Born with an umbilical cord tied around his neck, Chaffer was stuck and forcibly removed during labor. As a result, Chaffer has Erb’s Palsy: a rare neurological condition which stretches the nerve between his arm and shoulder, causing motor issues. In Chaffer’s case, this has resulted in his right arm being three inches shorter than his left.

That didn’t stop him from loving sports. Nor did Deutsch’s childhood injury.

“When she was younger she was thrown off a horse and broke her back, but she squats two times her body weight,” explains Chaffer, 26, who works as a production support analyst at a mutual fund company when he isn’t at the gym. Through his girlfriend, he learned about yet another sport he could try on for size.

“She had already done a couple of powerlifting competitions at that point, and I didn’t know anything about powerlifting,” he says. “I was just going to the gym to screw around.”

Powerlifters train to maximize their strength in three main movements: bench pressing, deadlifting (raising a barbell from the ground, until the lifter stands straight and holds the bar), and squatting. With his shorter right arm, Chaffer struggles to bench press because his arms can’t raise the bar evenly. The same goes for deadlifting. But in the squat, Chaffer is a beast. Today, he can squat 601 pounds—but he had to surmount a few serious stumbles to get there.

In the squat, Chaffer is a beast.

Inspired by Deutsch’s fearlessness, Chaffer started training more seriously. At the time, he was “only” benching around 200 pounds. Gradually, he began to enjoy the rituals of the gym and the community there. He says powerlifters don’t take themselves too seriously because they aren’t competing with each other, just with themselves. Chaffer joined a discussion group on Reddit (called a subreddit) filled with self-deprecating lifters who made him feel more lighthearted about his “crappy bench presses.” (Full disclosure: My boyfriend is a member of said subreddit.) “The majority of people do it for fun. With bicycle racing, people take it insanely seriously, they’ll buy $10,000 bikes for a low-level race. The proportion of people in powerlifting who [take it to those extremes] are way less.”

Still, he was afraid to sign up for the crowning event of powerlifting: a competition.

“It was partly because I didn’t want to get embarrassed, and I wasn’t sure about myself as a lifter, I guess. My disability played into that a lot. The only thing I was good at, and it’s still true, is squatting.” When he squatted 500 pounds for the first time, he thought, “Eh, whatever, maybe I’ll like it.” Deutsch encouraged him to go the whole way.

“Everyone was really supportive,” he says. “That was a year and a half ago, and I still find people who say ‘Oh, I remember you from that meet last year!’ I wish I’d done it earlier because I learned how to enjoy the experience and not be worried about what people will think and if I can fit in.” 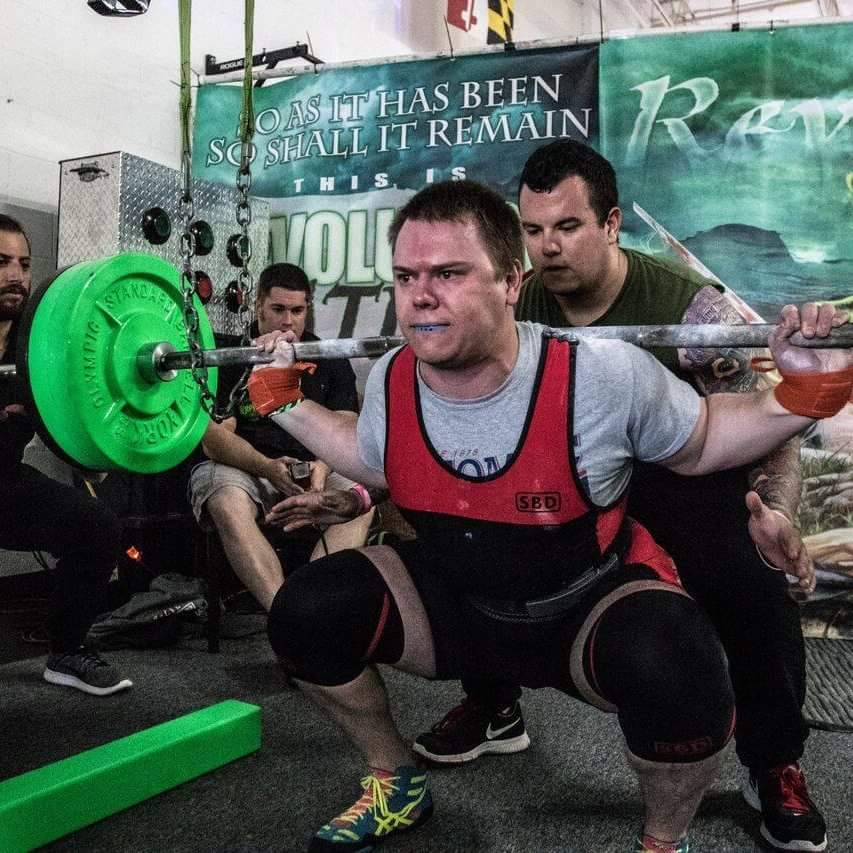 Then, Chaffer was tested to his core, physically and emotionally. He flew to the American Open in Boston, determined to hit more personal records (PRs). After preparing for months, he squatted 540 pounds, a PR by 22 pounds.

“That was awesome, and as soon as bench started, everything went downhill. I got the first bench, and then my body didn’t do what I wanted it to do. Deadlifting went as poorly as it could have gone … and I got a little disillusioned after that.”

For months, he had been in constant pain. “I was trying to force my body to do stuff that it wasn’t made to do,” he says. “That’s where I figured out: OK, I can’t bench like other people or deadlift like other people, and I need to reassess. I took a few weeks off, and went back in with a different approach. I decided to listen to my body more.

“I had to stop and relearn from the ground up. It took forever, and it was terrible.”

Chaffer was grappling with the cognitive dissonance of his invisible disability. Most people didn’t notice it, so he was often attempting movements to be as similar to the standard as possible. “If you talk to people who don’t do sports, they would say, ‘You’re normal.’ That’s not true, but that’s how people see others with invisible disabilities.”

Chaffer was grappling with the cognitive dissonance of his invisible disability.

After hearing about the organization I Am Adaptive, Chaffer began to view his body in a more holistic way. Through months of trial and error, he learned stances that would make his bench press and deadlift feel better. “It’s about constant adaptation,” Chaffer says. “Because you can’t function like a—quote—‘normal’ person, you keep adapting and changing.”

In the end, that’s why Chaffer connected with powerlifting more than any other sport.

“It’s empowering,” he says. “I can go to the gym and learn how my body works or interacts with the world around it. With the constant of the three lifts, I can go in and tweak small things and take that micromanaging control of something and try to analyze it and solve the riddle. When I started thinking of things more like I could work on and adapt to them, and that I could use it as a personal challenge, it started to feel really good.”

In May, Chaffer did a local meet “for shits and giggles” and set a state record for the knee-wrap division by squatting 590 pounds without wrapped knees. He shares his lifting videos online and has grown a following on Instagram (@ineffective_platemath), and he’s vocal about his struggles with Erb’s Palsy. 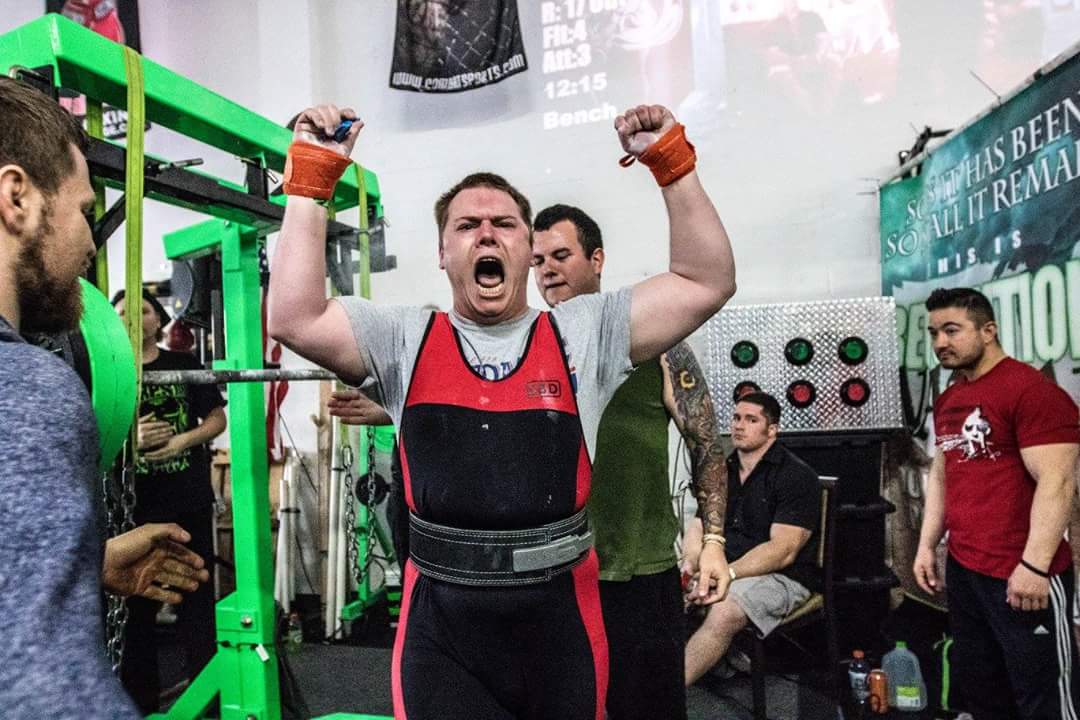 “When I share and have a big audience, people say, ‘That’s awesome you’re able to do this, I have the same condition, can you share something that will help me?’ People seeing me as a success has helped them see they can have success and keep trying.”

His next goal? Squatting 700 pounds. Instead of contributing to his pain, powerlifting is the first sport that has most improved the symptoms of Chaffer’s injury. “Now that I’ve been lifting for a couple of years, I don’t get the kind of back pain or shoulder pain that I used to get because I got the parts of my body that are screwed up, stronger. So it’s been good for my general existence. My body is better able to support itself.”

Despite all his personal success, Chaffer knows whom to thank: He continues to follow in the footsteps of his powerlifting girlfriend. They’ve moved in together in a Baltimore suburb near Catonsville. When the brawny couple isn’t at the gym, they coddle their 20-pound miniature pinscher, Diesel (“very anxious and excitable—does not like being left alone”). Chaffer says, “Everyone has weak a overhead press, except for my girlfriend who overhead presses more than I do. … No matter how discouraged she got, she just kept doing it. She would get knocked off and start again, and that really inspires me. That’s what I find awesome: hitting adversity and having things not work out the way you want, and keeping on going with whatever it is you’re working on.”

Elizabeth Limbach
Do you know someone else who would enjoy this story?
Unbowed, Unbent, Unbroken

Blind Rhythm And The Battle Rapper
Don’t miss one more amazing story.
Every week, we’ll send a few of our favorite stories to inspire you.
Send this to a friend
Scroll to top