"I don't like putting my pain in my work a lot," says painter Hertz Nazaire, who has Sickle Cell disease. "But it sneaks in there. It can't be helped."
Sickle Cell Disease

Growing up in Haiti as a chronically ill child, artist Hertz Nazaire would often look out the window, staring at the colorful local Tap Taps driving by. Like moving murals, these brightly painted taxis inspired Naz to pursue a career in art, even after he moved to the United States.

Now a successful painter based in Connecticut, Naz regularly uses his art as a way to explore his relationship with Sickle Cell anemia, the blood disease that has partially blinded him and kept him in chronic pain since childhood.

“Painting about Sickle Cell isn’t something I ever wanted to do,” says Naz. “But when I saw that people were reacting to it, and said that it spoke to their pain so they could relate to it, that’s when I knew it was worth painting.”

In this Folks video story directed by Josh Foisey, we visit Naz in his studio to talk more with him about his disability, his art, and how painting about his disease has made him (and others) feel so much less alone.

Want to learn more about Hertz Nazaire? Read our previous interview with him here, and make sure to follow him on Facebook. 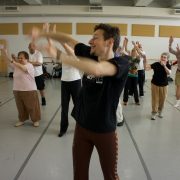 A Dance Class for Parkinson's
Breena Kerr
My Brain Is On Fire: What It’s Like To Live With Misophonia

The Limits People Place On Us When We’re Disabled
Don’t miss one more amazing story.
Every week, we’ll send a few of our favorite stories to inspire you.
Send this to a friend
Scroll to top