Free Flying Over Mountains With Quadriplegia

A paragliding accident left Joe Stone paralyzed from the chest down. But he's still flying. He has to.
quadriplegiaquadriplegic 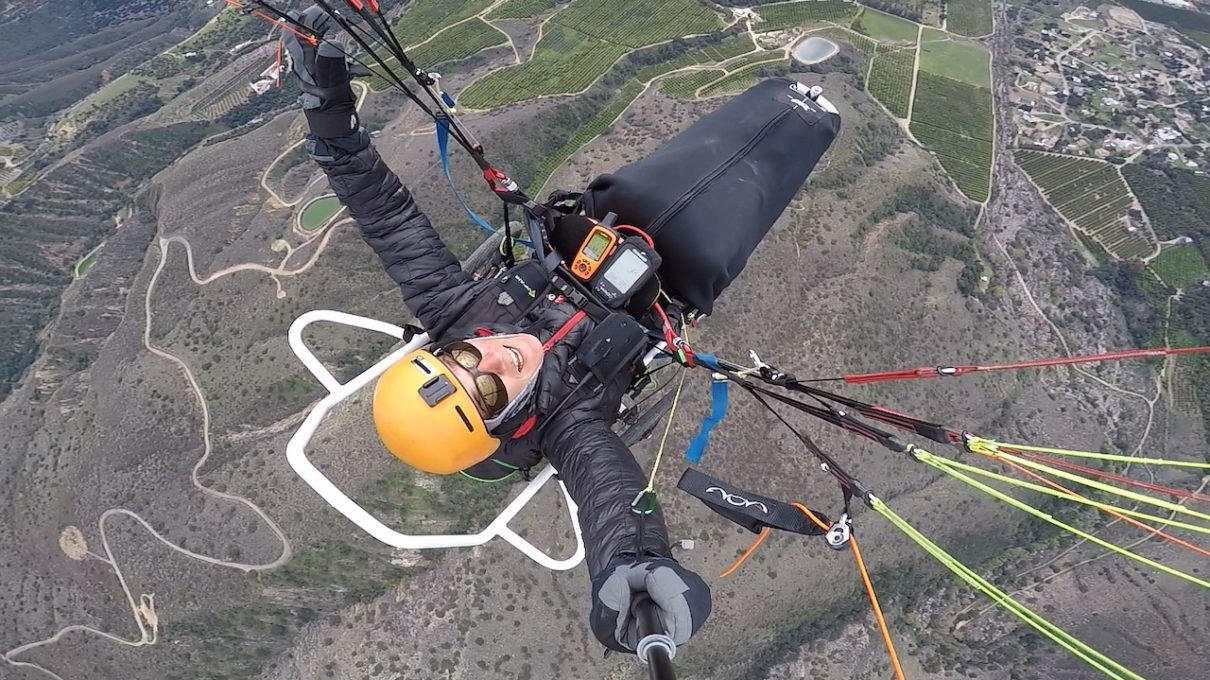 Ten years ago on Friday, August the 13th, Joe Stone fell out of the sky. An active 25-year-old, Stone had been flying above the golden hills near his home in Missoula, Montana on a speedwing—a small, zippy type of paraglider. Then he made some mistakes and his parachute collapsed, sending him crashing down. After emerging from a one-month coma and a four-month hospital stay, Stone was diagnosed as an incomplete C-7 quadriplegic: paralyzed from the chest down with some impairment in both hands.

Rather than sink into the multi-year depression that many spinal injury patients endure, Stone set goals to motivate him through his recovery: first, to be living independently within one year (a milestone most people with similar injuries achieve after two to four years). With help from his family and friends, he got there in seven months.

So he decided to set another goal: hand-cycle the Going To The Sun Road in Glacier National Park on the one-year anniversary of the accident.

“For me, after the accident, I knew that the outdoors was the answer to bringing back my quality of life,” says Stone, his bright blue eyes crinkled up in a characteristic grin.

“After the accident, I knew that the outdoors was the answer to bringing back my quality of life.”

As a rollerblader, mountain biker and flyer, Stone was accustomed to challenging himself on rugged adventures. He trained hard, pushing his limits and inventing fixes to adapt the hand-cycle to meet the specific needs of his injury.

It took Stone over eight hours to crank up the 12 miles and 2,500 feet to the top of Glacier’s famous lookout. But when he coasted to a stop after completing the ride, Stone had a whole new perspective on what was possible for pursuing outdoor adventures with a disability.

In 2014 Stone decided to continue pursuing his love of free-flight. He drove to Salt Lake City to meet Chris Santacroce, founder of the nonprofit Project Airtime that helps people with disabilities fly. Until meeting Stone, Santacroce had mainly offered tandem paragliding flights. But he was excited to figure out how to help Stone reach his goal of flying solo again.

Together, they learned how to push Stone off the launch in a specialized “flying chair”: a tricycle with an integrated harness that’s attached to a wing. Once the wing inflates, Stone is on his own in the sky, steering the paraglider with his hands just like everyone else.

“The first time I got back in the air was the first time that I felt normal again,” said Stone. “Flying feels just the same as before I was disabled.”

After spending three summers learning how to fly with adaptive equipment, Stone decided to embark on phase two of his flying goal: learning how to paraglide cross-country, where you travel as far as the wind and thermals allow, rather than traditional top-to-bottom flights that end at a designated landing zone.

“The first time I got back in the air was the first time that I felt normal again… Flying feels just the same as before I was disabled.”

His friend from Missoula, Casey Bedell, helped guide and encourage Stone as he learned the skills to travel long distances, and flew beside him during Stone’s first cross-country flight: a 12km cruise right over the site where he’d crashed eight years earlier. Not long after, Stone and Bedell clocked a 68km cross-country flight in Utah, patiently circling off the Wasatch Mountains until they found thermals to lift and carry them north.

Stone says that his mindset for how to progress in the sport is much different than before the injury, and he’s happy to take his time when learning new things.

“I’m not trying to be the hero tomorrow anymore. Instead I’m focused on the slow game. I might not be the one cowboying up over the biggest terrain, but I end every day with a smile.”

Next up, Stone began preparing to make the dream he’d had before the accident a reality: spend a year on the road traveling and flying around the country. He set out from Missoula in the summer of 2018 in his truck, towing a simple 5×10’ camper.

“I had no running water or bathroom, and had to create my own solutions to be able to travel independently. To be honest, the first six months were really hard. But then I found this great rhythm, and one year turned into two years. It was pretty magical.”

Stone recently decided to trade in his camper for indoor plumbing, and is excited to call Jackson, Wyoming his new home base. He now launches from the 10,000-foot peaks at Jackson Hole Mountain Resort.

“I’ve learned a lot about dropping the ego, being me, and not comparing myself to others,” says Stone.

He’s also learned a lot about how people who live with disabilities are not always treated equally, particularly when it comes to inclusion in outdoor recreation.

“I’ve learned a lot about dropping the ego, being me, and not comparing myself to others.”

“To me, equality means inclusion—allowing everyone to participate rather than segregating or restricting people with disabilities from able-bodied events,” explains Stone.

To bridge the gap between people with and without disabilities, Stone started a foundation in 2012. He partners with other nonprofits and community groups to provide adaptive gear for athletes with disabilities. One of the projects he’s most proud of is working with Teton Adaptive to include adaptive mountain biking in the Wydaho Rendezvous mountain bike festival near Jackson, which has turned into the largest gathering of adaptive mountain bikers in the world.

When he’s not flying, biking, or advocating, Stone’s “day job” is motivational speaking. He gives keynotes at schools, hospitals, businesses, and events across the country. Stone speaks candidly about the painstaking, arduous process of re-learning how to breathe, to swallow, to talk, as well as how he was motivated to persevere to get back to the places he loved best: mountains, rivers, sky.

“I’m fortunate to be out doing things I love every day. Maybe that’s the celebration…”

On the day of the ten-year anniversary of his accident, Stone finished a bike ride beneath the towering Grand Teton and the warm blue sky. He realized that he no longer felt the need to mark the date with any sort of milestone.

“The past decade has been a dream, a gift made possible by so many supportive people. I’m fortunate to be out doing things I love every day. Maybe that’s the celebration … sitting back to acknowledge that I’m living a life full of adventures with friends and family, and I’m enormously grateful for all of it.”

Lupus Prepared Me To Survive COVID, But Society Wants To Sacrifice Me Anyway
Meghan Beaudry
What You Think Is Your Greatest Weakness Is Really Your Superpower

Climbing To Heal
Don’t miss one more amazing story.
Every week, we’ll send a few of our favorite stories to inspire you.
Send this to a friend
Scroll to top