From AIDS to Zika, New Books Teach Kids About Conditions

Whether Crohn's disease, lactose intolerance, or childhood depression, a growing number of children books feature diseases and ailments as their subjects.
Crohn's Diseasedepressiondiabetes

In her picture book Even Superheroes Get Diabetes, author Sue Ganz-Schmitt tells the story of a boy named Kelvin who hates the constant fingers pricks and shots required by his diabetes. But with the help of a (medically accurate) insulin pump and a mysterious doctor, he becomes Super K, flying around the world with the doctor delivering insulin to other kids with diabetes.

Ganz-Schmitt wrote and subsequently self-published the story in 2007 after watching one of the families in her kids’ playgroup cope with type 1 diabetes. The son, Kaden Kessel, was weeks away from his third birthday when the family got the news. Suddenly his parents, who also had a newborn, had to constantly monitor his blood sugar to keep him healthy. 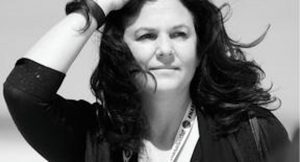 Sue Ganz-Schmidt, author of Even Superheroes Get Diabetes.

When Ganz-Schmitt searched for a story about childhood diabetes, she found picture books that offered comfort to families but nothing that went beyond comfort to actually inspire them. After attending events with JDRF, an organization that funds type 1 diabetes research, Ganz-Schmitt says she was struck by how empowered the kids were in speaking about diabetes, almost like real-life superheroes.

“When I first saw it, I was kind of in awe because … even though the kid becomes a superhero, he looks like me in the book and it’s based off of my story,” says Kessel, who’s now 17. The book was so inspiring to Kessel that he used it in sixth grade to become a sort of diabetic superhero himself, bringing it into school to defend a young classmate from being bullied for his diabetes in class.

While most picture books introduce kids to story and language, perhaps imparting a few feel-good lessons along the way, ones about medical conditions serve a deeper purpose.

While most picture books introduce kids to story and language, perhaps imparting a few feel-good lessons along the way, ones about medical conditions serve a deeper purpose: Helping kids with a medical diagnosis understand what’s happening to their bodies or educating young readers about medical conditions a relative, friend or classmate might have. Not to mention teaching empathy. 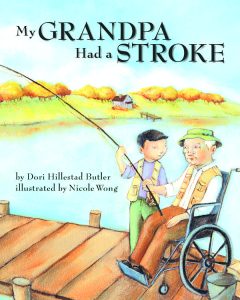 Cover of My Grandpa Had A Stroke.

Some of these books have such niche appeal that they’re self-published. However, the American Psychological Association has a publishing imprint called Magination Press that specifically publishes fiction and nonfiction books for kids and teens around mental health issues, including medical diagnosis and also topics like mindfulness and learning disabilities.

“With any kind of physical illness or mental health issue, there’s an emotional, social and mental component to that,” says Kristine Enderle, director of Magination Press. Its medical-themed picture books include Danny and the Blue Cloud: Coping with Childhood Depression (by James M. Foley, DEd, 2016) about a bear learning “Feel-Good Rules” for dealing with depression, and My Grandpa Had a Stroke (by Dori Hillestad Butler, 2007) about a little boy who must learn to adapt after his grandfather has a stroke. 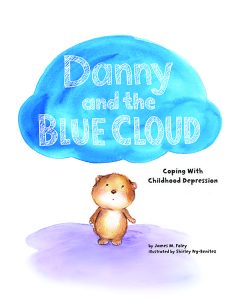 Danny and the Blue Cloud, a book that teaches kids about depression.

“We try to empower kids,” Enderle says. “We never really want to tell them what to do or how to feel or how to fix it, but we hopefully provide them with enough information and context that’s all rooted in evidence-based psychology.” To that end, most Magination Press titles are written by child psychologists, counselors or other medical professionals and include a note to parents on how to talk to kids about these issues and organizations they can tap for additional resources.

“We feel like there’s great power in this information and understanding the psychological and emotional side of things,” Enderle adds.

Frank Sileo is a New Jersey-based psychologist who’s written several picture books for Magination Press. He got the idea for his first picture book (published by a different publisher, who’s now defunct) from doing biblio-therapy with his young patients. “[With biblio-therapy] you read a book to a child about a particular problem, talk about the problem, and it validates their thoughts and feelings,” he explains. 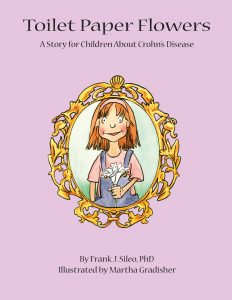 When patients asked for a book about Crohn’s disease, Sileo couldn’t find one. Instead, since Sileo suffers from Crohn’s himself, he decided to write a picture book and Toilet Paper Flowers: A Story for Children about Crohn’s Disease was born. In it, a little girl with Crohn’s disease spends so much time in the bathroom, she makes toilet paper flowers and shares them with her friend.

Sileo’s second book was inspired by a patient who was bullied for being allergic to regular daily milk, so Hold the Cheese Please! A Story for Children about Lactose Intolerance. The story teaches kids about lactose intolerance (not to be confused with an allergy, as Sileo points out) and encourages them to accept each other’s differences. “It’s hard to be a kid and not have those things [like milk],” Sileo says, peppering his speech with medical puns.

Ganz-Schmitt’s second book, The Princess and the Peanut: A Royally Allergic Tale, also tackles food allergies. When she self-published the book in 2011, some parents erroneously believed that food allergies were made up (like Santa Claus or the Easter Bunny, Ganz-Schmitt quips) and didn’t understand their severity. “I was just so astounded what those families [with serious food allergies] had to go through,” she says. “Every bite was walking into a minefield for them.” 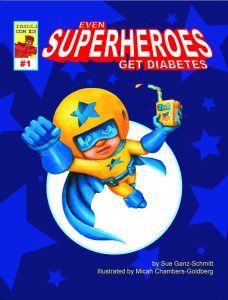 Full cover of Even Superheroes Get Diabetes

Ganz-Schmitt hoped by that educating children about food allergies, even those who didn’t have allergies themselves, those children will look out for siblings, friends or classmates who could suffer serious consequences from exposure to allergens. “‘Oh no, Mom, you can’t put peanuts in those cookies!’” she says. “They get it immediately and they really join the community of people who care for these children.”

As for Kessel–the original Super K–he’s now the JDRF walk ambassador for the Los Angeles Walk and is working to get the Latino community to join the walk and gain better access to medical care, similar to how his picture book counterpart helped others with diabetes.

He went through a rough period around age eight or nine where he wondered why he’d gotten a disease that doesn’t run in his family. Now he takes a more philosophical approach, pointing that the perseverance people with diabetics learn helps many of them excel in elite sports and business. “It’s hard and it sucks sometimes and none of my friends have it–all of that is true–but I feel like it’s been a blessing in disguise because the things I have learned from it,” he says.

And it all started with a book. For further reading with your kids on living with conditions, we suggest starting with these: 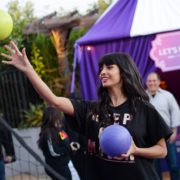 When Someone Says They Are Disabled, Believe Them
Rachel Charlton-Dailey
The Tale Of The Long Island Mariner I Fake Sick For A Living
Don’t miss one more amazing story.
Every week, we’ll send a few of our favorite stories to inspire you.
Send this to a friend
Scroll to top