Despite her diagnosis, Keefa Hawkins pushes her body to the limits through Crossfit: part of a quest to show that physical fitness is for everyone.
ankylosing spondylitisarthritis 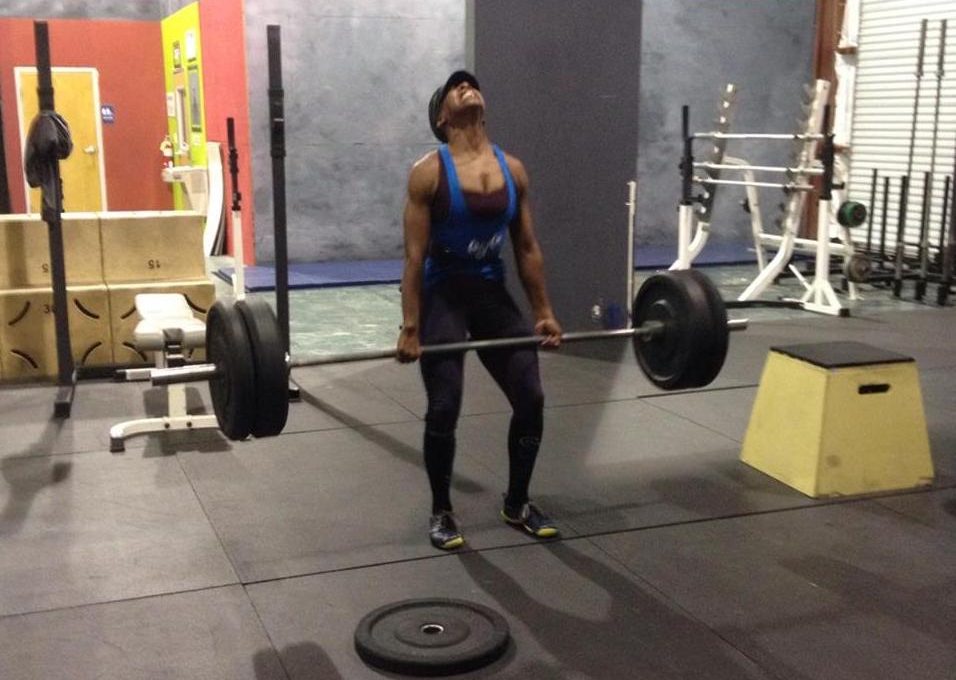 When Keefa Hawkins’ doctors told her she had ankylosing spondylitis (AS), a type of arthritis that inflames the joints of the spine, they showed her pictures of people in the advanced stages of the condition,  bent over double from painfully fused spines.

But the fitness fanatic had other ideas about her future. “I was convinced that wasn’t going to happen to me. My journey–and my prognosis–would be different,” she says. 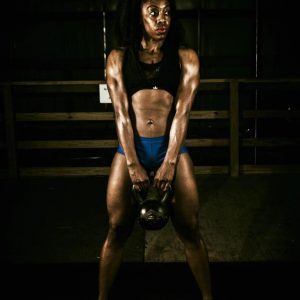 More than two decades later, it seems Keefa’s determination has paid off. The forty five-year old believes the punishing Crossfit regime that sees her working out five days a week and competing in gruelling competitions has kept the worst of her condition at bay.

Keefa was diagnosed at twenty-four. It started with a routine run around the park with a friend. Afterwards, she jumped into her old VW bug and went to put it in gear. To her surprise, she couldn’t press down on the clutch without pain. Later, she realized the pain-causing inflammation in her lower back had built up over months, maybe years. But sat in her old car, Keefa wrote the pain off as a pulled muscle. After all, she was a young woman at the peak of physical fitness.

However, a week later, she was in agony. “I was in so much pain I couldn’t walk. I was bedridden by the last three days. I was an athlete, I trained in martial arts; I went from being an able bodied person to a point where I couldn’t even get out the bathtub by myself.”

I was an athlete, I trained in martial arts; I went from being an able bodied person to a point where I couldn’t even get out the bathtub by myself.

Eventually, her boyfriend carried her downstairs and took her to the emergency room. “At the hospital they didn’t know if I was paralyzed, or what was going on.”

For days, the doctors ran tests, trying to work out what was wrong. Back then, she says, there wasn’t a whole lot known about AS. What doctors believed at the time was that the condition usually presented in white men, especially former drug users. In the decades since, both of these suppositions have been disproven, but at the time–as a Black woman who’d never taken drugs in her life–Keefa didn’t fit the profile.

After four days of head scratching, a young resident finally suggested the possibility of AS. Tests confirmed Keefa had a protein called HLA-B27, a common genetic marker for the arthritis. AS specifically affects the spine, causing inflammation that leads to chronic pain. In advanced cases, the spine fuses into a fixed, immobile position, and the autoimmune disease can also affect the eyes, lungs and heart.

Her doctors gave her high doses of anti inflammatories and sent home to her family, who had to bathe and care for her due to the atrophy that had set into her spine.

Although her diagnosis opened the door to her current, positive mindset, at the time it was depressing, she says. “I felt helpless, hopeless. I had a dog training business at the time, I had clients. The hardest thing was explaining to people, my clients. I shouldn’t have this thing… but I got it.”

“The hardest thing was explaining to people, my clients. I shouldn’t have this thing… but I got it.”

But Keefa’s not one to dwell on the past. Both before and after her diagnosis, she’s lived a normal, happy life: she’s since had two children, and has forged a career as a project manager for AT&T. And the exercise fanatic who was determined to not become the hunched-over casualties in the doctors’ pictures believes her passion for high-impact physical exercise–particularly Crossfit–has helped keep her condition at bay.

Eight years ago, looking for exercise classes, Keefa discovered a small local gym offering Crossfit classes. She instantly fell in love with the high-intensity workout, and soon began running her own classes in her garage for a few neighbors and friends. 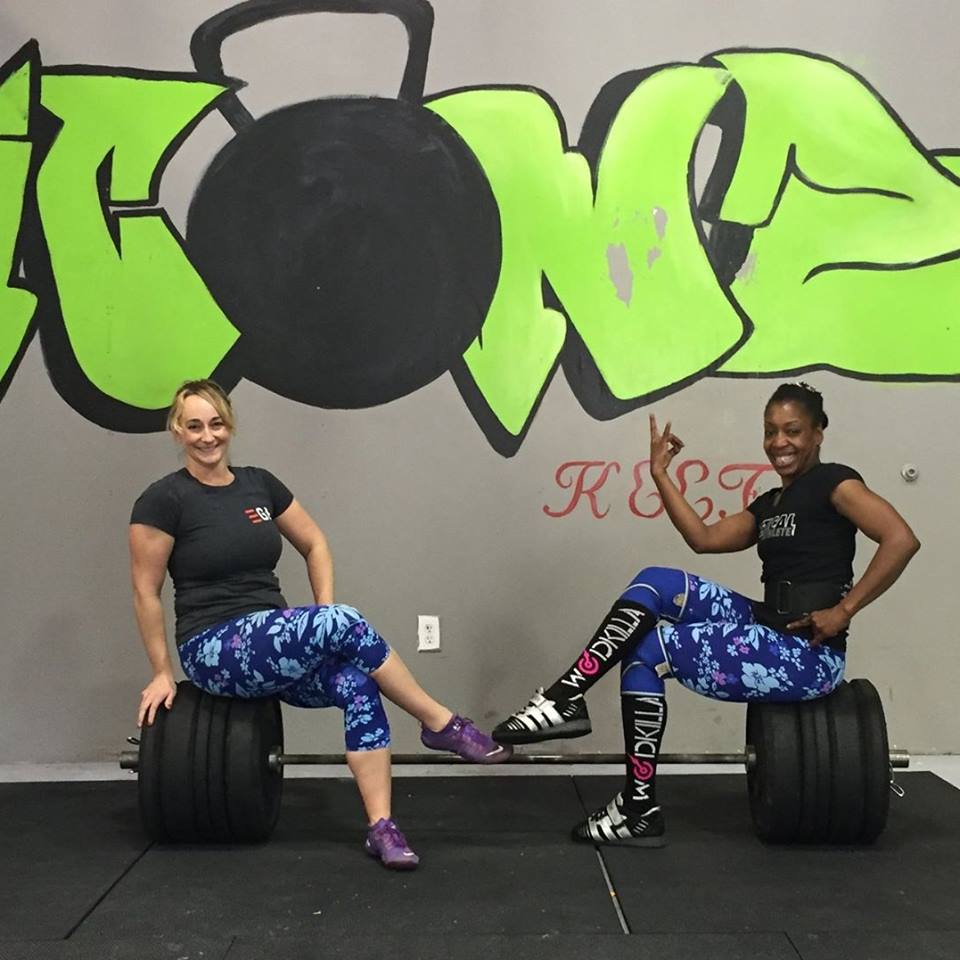 Keefa opened her own Crossfit gym to help show that physical fitness is for everyone.

Two years later, she opened her gym, where she encourages people from all walks of life to embrace the Crossfit lifestyle, driving her clients to reach their fitness goals with a cheerful, tough-love approach.

“If someone’s finding it hard, I just say, ‘sometimes shit is hard. But you see my ass in the gym: you’re twenty-four, come on, get busy girl!’”

She believes her experiences allow her to connect with her clients, some of whom have been through their own health problems – cancer, strokes – and found her after hearing her story. “Everything I went through is a testament to people who come to my gym. I have this experience that God gave me specifically for them. My story is everybody’s story to some degree.”

“My story is everybody’s story to some degree… If you don’t experience pain you’re not human.”

“I’m a hundred percent convinced that’s why my experience has been what it is.”

Two years ago, a desire to push herself to the next level in Crossfit took Keefa off the diet-and-exercise path to managing her condition. Until then, Keefa had managed bouts of pain with an over-the-counter painkiller. But when she realized how much the pain held her back from excelling physically, she began taking Humira, an anti-inflammatory arthritis drug.

“I thought with all my working out I could just beat [AS]. And I really didn’t want to take any medication, I wanted to do it on my own, but I wanted to dead lift heavier, and my joints stopped me. It was painful. I can deal with nagging chronic pain, but lifting would put me out for a week at a time.” 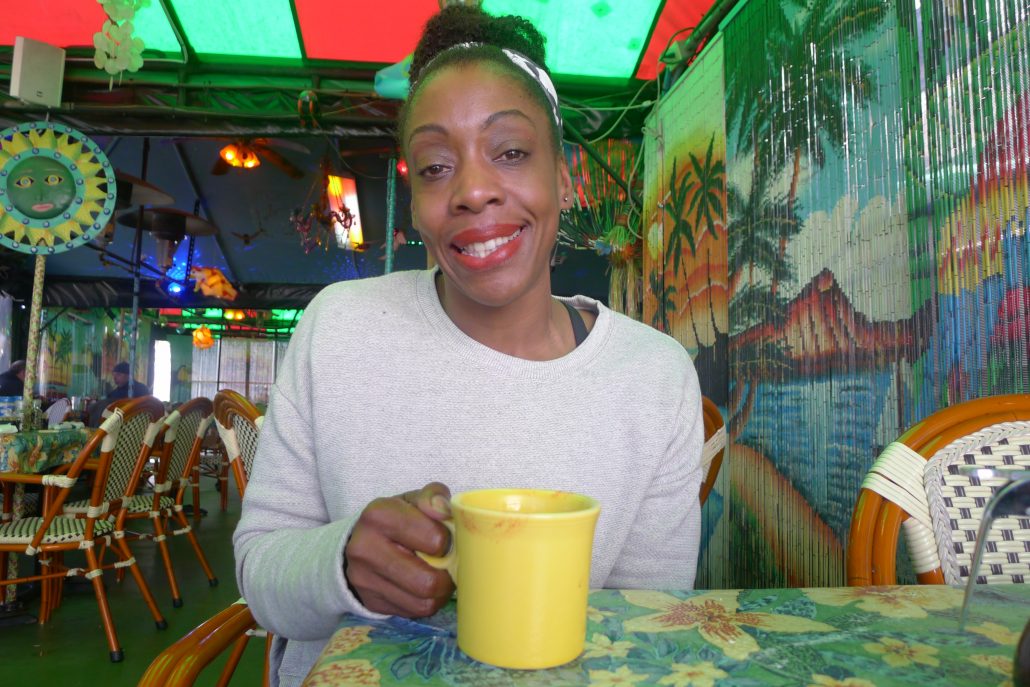 Her plan worked, and Keefa redoubled her efforts to achieve her fitness goals. Last year she achieved a position in the low 400s in the Crossfit World Games qualifiers. This year, she’s hoping to make the top 250, which would mean entry to the games in the Masters Division, for competitors aged forty five to fifty.

Keefa’s doctors would probably horrified to hear she’s deadlifting 225-pounds and counting, she admits. So she keeps it to herself. “I don’t tell them all the heavy stuff. They have always said I shouldn’t do that, but I didn’t hear that. I have claimed I’m a special case.”

“Every twelve weeks I have to do blood tests. And that’s what my doctors freely get from me. They get blood, they don’t get to tell me what else I can do.”

As for her prognosis, Keefa’s not too sure what’s in store. But one thing’s certain, and that’s Crossfit. “I believe I’ll be competing until I die. God promised salvation, he never promised life would be pain free. Success isn’t pain free, and pain is part of the human condition. If you don’t experience pain you’re not human.” 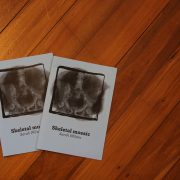 To Cope With Chronic Pain? Write Your Heart Out
Naomi Arnold
Reconstructing Dad

Lullabies for Lexi
Don’t miss one more amazing story.
Every week, we’ll send a few of our favorite stories to inspire you.
Send this to a friend
Scroll to top