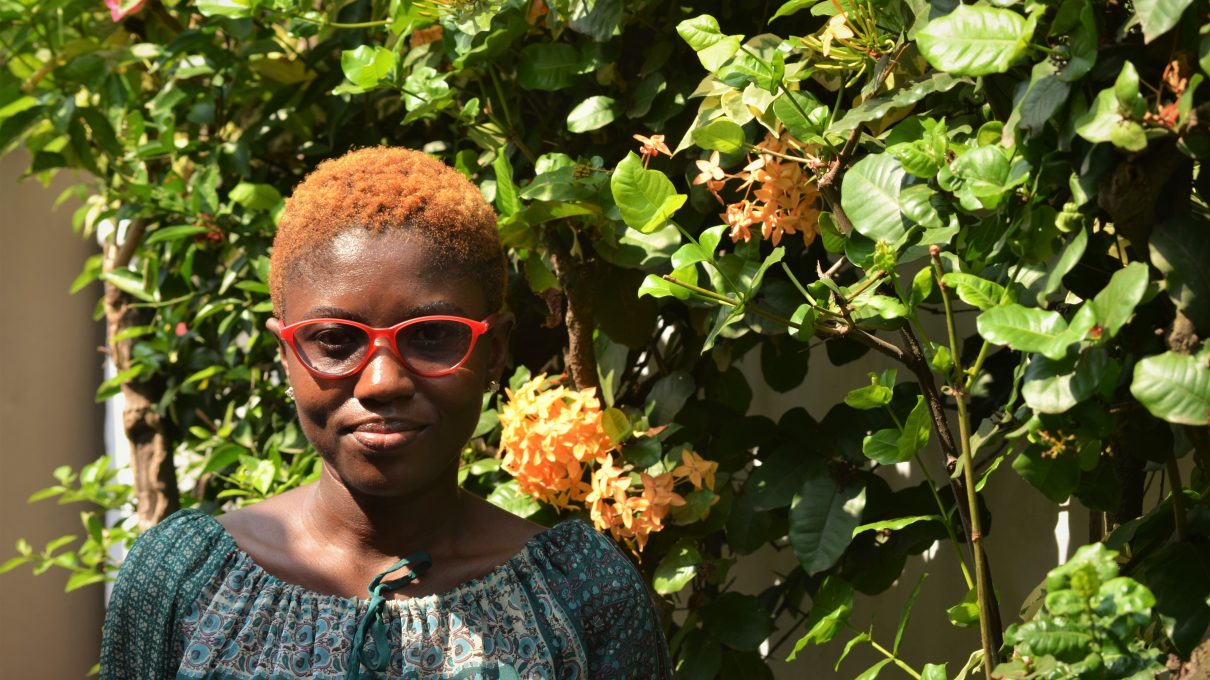 Ceiling fans, planes flying above her hostel and anxiety over school work used to send Sandister Tei into a state of panic and shakiness.

When she went to a local doctor in her home country Ghana to try find out why she was having strange thoughts and these physical reactions to them, she was told she had malaria–a common disease caused by mosquito bites in this West African country.

At 19, she knew this diagnosis was wrong. She knew what malaria felt like, but didn’t see the connection to her current state. 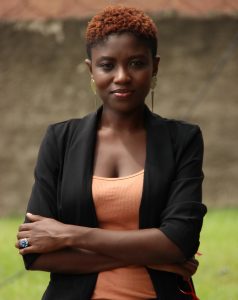 Sandister Tei was 19 when she started suffering from anxiety attacks. She was diagnosed with malaria instead.

“Being nervous and panicking about things, I didn’t think malaria could do that to me.”

So, she did her own research on Google and happened upon the word “serotonin,” telling her that what was going on was more likely to do with a chemical imbalance.

It got her thinking about how she was as a child, she often suffered  fatigue and would worry a lot. People would accuse her of being lazy, or that she kept to herself too much. Her school work suffered as did her self-esteem. Thanks to Google, she had some light thrown on her situation.

“I did more and more reading and realized this thing is not as exclusive: there are others out there,” Tei, now 30, and an online journalist for one of Ghana’s top media houses, recalls.

Journalism Leads To A Proper Diagnosis

She found ways to try and cope and deal with her mental health problems, but it affected her university life. She was studying geography at the University of Ghana when she started working towards a career in journalism, kicking it off with the student rags and local newspapers.

She then started blogging, and posting on Facebook, which lead her to wanting to work in online journalism.

“Being nervous and panicking about things, I didn’t think malaria could do that to me.”

Tei sought out opportunities to learn more about online journalism, with her eyes set on studying outside Ghana, as she did not see any courses within the country that had this focus.

In 2013, Tei landed a scholarship to do her masters in journalism at Cardiff University in Wales.

It was in Wales that she went to another doctor and was properly diagnosed with depression.

That diagnosis and the treatment turned her life around, her grades improved as did her energy levels. It got her thinking about the years she suffered in Ghana, because no one was able to tell her what was going on with her health.

“If I had someone to tell me to go to the hospital to get this drug, maybe I would not have suffered this much needlessly for like ten years. So that is when I thought I should be able to tell people about this, to help somebody. I am not going to administer drugs, but tell them you might want to go to hospital because there is medicine for your problems.”

When she came back to Ghana in 2015, she felt it was only people who knew about mental illness that would speak about it.

There wasn’t too much education available on mental health. “It wasn’t a national conversation,” she found.

This is something the experts echo. In 2016, Executive Director of the Mental Health Authority, Dr. Akwasi Osei, told local media mental health care in Ghana needed critical attention. He said  Ghana’s doctor-patient ratio in the mental health sector stands at 1:1.7 million as compared to 1:1 million in Nigeria and 1:50,000 in Kenya. He quoted a report that suggested  41 percent of the population, predominantly women, suffered from mental distress and depression.

In late 2016,  nurses from the Accra Psychiatric Hospital went on strike to highlight how dangerously underfunded the facility was. It is often in the news for not having the means to feed and medicate its patients. In the capital Accra, it is hard not to notice the number of mentally unstable people left to fend for themselves on the streets.

With this context, Tei decided to start a mental health support group in Accra.

“When you are depressed, anxious or when you are in a very bad mood, people say you are feeling blue. Purple has some blue in it, and the color purple is linked to royalty, well-being, affluence, goodwill. A lot of positive things. I think that even though we are ‘blue people’ we have the potential to crossover to the purple space.”

There are about a dozen members, they can meet each week, whoever feels like meeting, can do so. 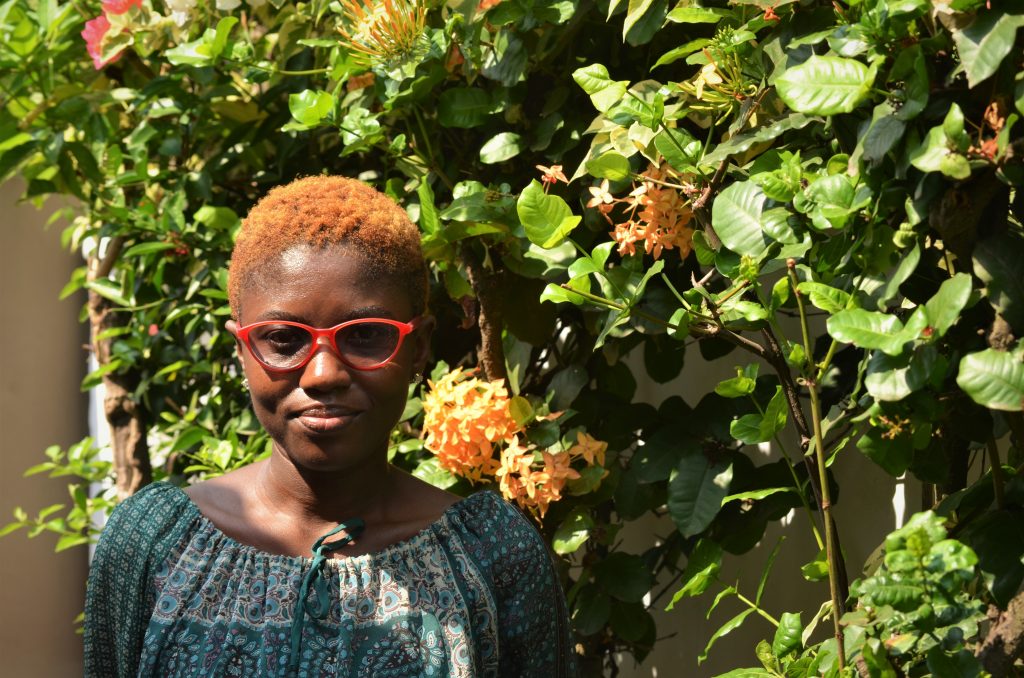 Tei keeps contact with the members in a private Facebook group, and then has a public page to post articles on mental health and to advertise the group meetings if people want to join.

Purple People seek to listen to each other on common experiences, share and shed light on coping strategies to help each other while also encouraging members to seek professional help.

Since she advertises the group through social media and a blogger email list, she has found most of the members are professionals in Ghana, aged 27 to about 36. There are health care workers, an entrepreneur, software engineer, an environmentalist and Tei is a journalist.

While the group members are well-educated, living in Accra, eventually Tei wants to be able to target those in this country who might not have the same access to information.

“With Purple People, all of us can speak English and all of that but at a certain time I will focus more on people who can not speak English or even access Google, or don’t have the internet.”

She plans to try spread the message of her group in one of Ghana’s local dialects–Akan, through local radio stations in the future.

With the current formation of Purple People, she says, people don’t just connect in the weekly meetings.

“There have been times people will write there [in the Facebook group] they are feeling really bad and need help – can someone get to them. I don’t want to call it a hot line, but eventually it became something like that.”

When this happens, members will rally and get the person the help they need.

Despite starting the group, Tei also uses it to learn more about her own issues.

She turned to the group for some pointers on what was going on and how she can help manage it.

“I set up a group but ended up going back to the group and asking ‘I know some of you have panic attacks already how is this thing like’?”

In Ghana, if a person seeks treatment for depression, they are likely to be taken to a hospital or a church group.

Another member of the group held a session for those who wanted to learn more about anxiety and shared coping mechanisms.

However, Tei is quick to point out that the group does not try, or seek to treat people, but instead helps them finds ways to get treatment, or deal with issues.

They support each other to go to the hospital to get professional help.

Tei explains that in Ghana, if a person seeks treatment, or someone seeks it on their behalf they are likely to be taken to a hospital, or a church group. Ghana does not have the General Practitioner (GP) system many western countries have.

In cases where someone might be aggressive, Tei notes they might be checked into a psychiatric  hospital, though depending on who is trying to help them, they might end up at a church, under the belief that prayers will fix them.

It was Google that helped her realize her racing head wasn’t malaria, and it was through the internet she brought Purple People together. And with her whole work being about being online, this extends to the little free time she has as well. Tei is involved with the Wikipedia community, where she edits Wikipedia Ghana. She is a co-founder of the Wikipedia Ghana community, and one of its representatives.

While she had to search hard to identify what was going on with her 11 years ago, Tei says there is a lot more mental health awareness and advocacy in Ghana now. Those who feel like they are lost in the dark luckily have more avenues to turn to.

Those who feel like they are lost in the dark luckily have more avenues to turn to.

“I have sat in meetings where people have come out and said ‘Hey I am depressed, have anxiety or am panicking’,” Tei says.

“I get the impression people are becoming more aware and speaking up.”

Jennifer Furner
Do you know someone else who would enjoy this story?
You might also like...
The World's Only Classical Music Ensemble For The Mentally Ill
Ray Cavanaugh
A Mighty Blow Against Sleep Apnea

The Kick-Ass Yogi Who Fights Lyme Disease With Swear Words
Don’t miss one more amazing story.
Every week, we’ll send a few of our favorite stories to inspire you.
Send this to a friend
Scroll to top