Jesse Lavine always wanted to forget his diabetes. Now, for a good cause, he does everything possible to draw attention to it.
diabetesType 1 Diabetes 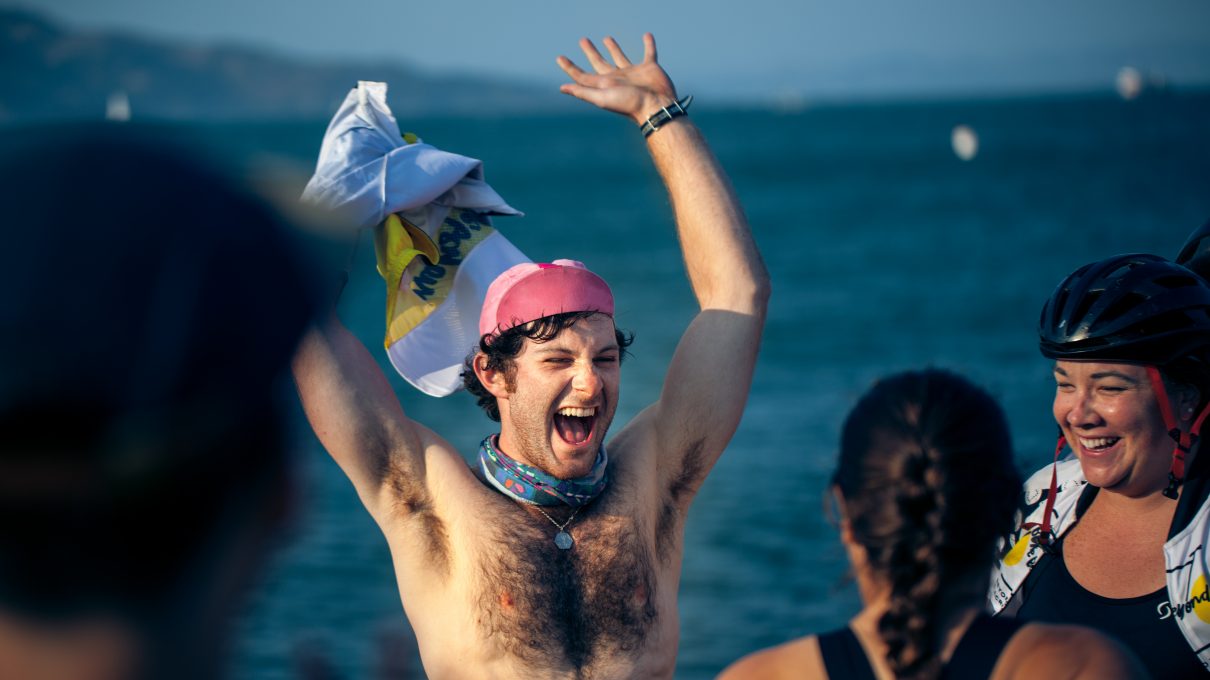 When he crosses the finish line after a two-month, 4,200-mile bike ride across America, Jesse Lavine collapses into the arms of his family and friends. Sobbing and laughing, it’s hard to tell where the one begins and the other ends.

As part of Beyond Type 1’s Bike Beyond, a cross-country ride from New York to San Francisco to raise awareness about Type 1 Diabetes, Jesse and his teammates have just completed a ride some never thought they could make.

Jesse’s got the personality of everyone’s favorite camp counselor. He’s sweet, appropriate, and warm, but there’s something mischievous about his smile, like he’s about to play a prank on you. A goofball, he was literally donning a fake felt moustache when I caught up with him in San Francisco. 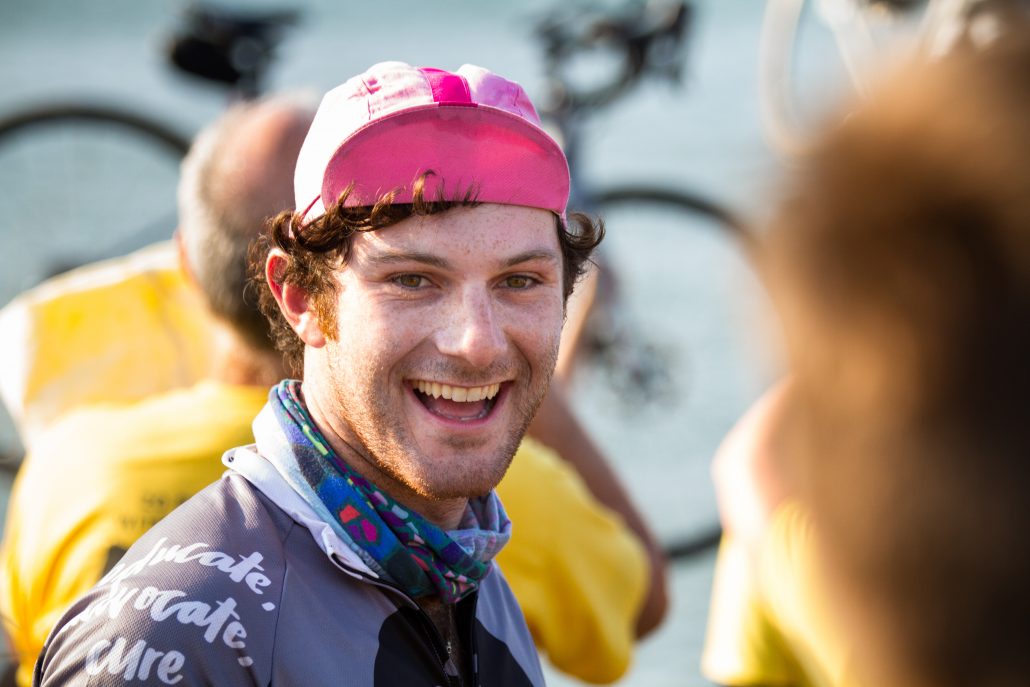 Even with such a silly accessory, it was hard not to be impressed by Jesse: the 22-year-old has no nothing to hide, no shame, not a trace of social anxiety or reservation. He knows it’s a power he can use to help keep others buoyant, and he does: at one part during the ride, when his teammates’ spirits were at the lowest, he shaved off half his beard and kept it that way for days, just to keep his friends laughing.

It took a while, though, for Jesse to be emotionally ready to take this trip. For years, he wanted to have as little with diabetes and Type 1 diabetes community as possible… let alone raise awareness of the condition.

Diagnosed with type 1 at age 11, Jesse says he’s always wanted to have as normal a life as [he] could.” He went to a diabetes summer camp the year he was diagnosed, but immediately hated it. Part of that was because of his expectations on what summer camp should be like. At his particular diabetes camp, there were no pine cabins and no outdoor showers. It was “kind of resort-y,” Jesse says. “I had been to other camps before that and knew what it was like and I wanted to rough it.”

His experience at diabetes camp made Jesse not one to be involved with other Type 1s. “I wanted to feel normal by doing the things that my friends without diabetes were doing.” So Jesse did as much as possible to push his diabetes to the background of his life. That’s how Jesse lived for the next nine years. “ I just wanted my diabetes to play as small a role in my life as possible.”

I just wanted my diabetes to play as small a role in my life as possible.”

As he would learn, ignoring your diabetes is easier said than done. During an 11 mile hike through the Big Sur mountains his first year of college, he fell into a toxic state of ketoacidosis. In other words, his body had too much glucose, but since his cells have no way to access it as fuel, they start feeding off fat. He made it out alive, but it shook him up.

Still, Jesse continued shunning other Type 1s, and pushing his condition to the background of his life, until his sophomore year at college. Attending Los Angeles’ Pitzer College, Jesse was unhappy. “My body didn’t feel good. I was scared to eat a lot of food because I didn’t know what it would do to my blood sugar,” he remembers. Depressed and socially isolated, he walked into the registrar one day and withdrew himself mid-semester for a medical leave of absence.

When he got home, he got a new endocrinologist who got him on a continuous glucose monitoring system so that he could track his blood sugar all of the time and understand what the instant effect insulin had on his body. He enrolled in a class at Boston University and stayed with family friends he refers to as “two awesome rabbis with five kids in a giant pink house.” 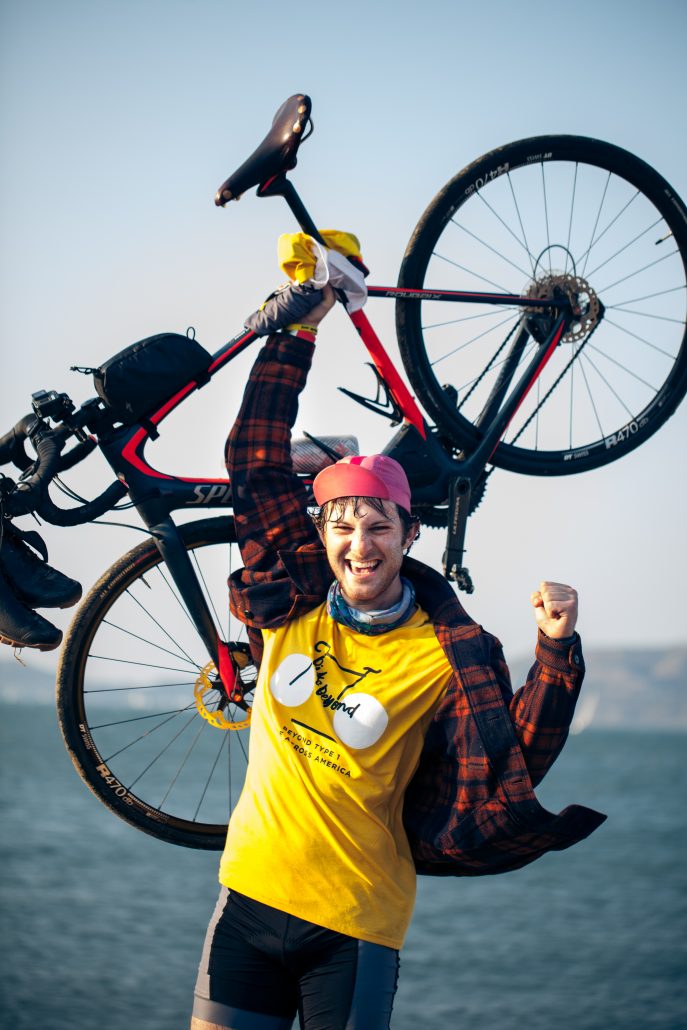 Jesse at the finish line of Bike Beyond. Photo: Whitney Freedman

It was during this period that he also met Steve Richert, the director of Project 365, in which Richert climbed rocks every day for a year to prove that you can do anything with Type 1 diabetes. Meeting Richert was revelatory to Jesse. Before, he’d viewed his diabetes as weakness, but Richert made Jesse realize that he could, instead, “optimize diabetes” to live life to its fullest.

Soon, Jesse was interning at  T1D Exchange, which runs an online community for people with Type 1 called Glu. It was while there that Jesse finally made his peace with having Type 1. “It was the first time since that camp that I worked with other people with type 1,” he says. “They get what you’re going through and also you get to see that people have a lot of different ways of going about it.”

Living with type 1 diabetes for nine years, Jesse realized he had the expertise to help people. Although he’d struggled embracing his own experience, Jesse started outreach work at some diabetes summer camps. Except now, he saw the situation more clearly than he had as an 11-year-old.

“Other families were going through what my family went through,” Jesse says. “The fear and the worry that the kids wouldn’t amount to anything. It was so gratifying to get to say, ‘hey! It’s going to be ok! Look at me, I’m ok!’”

Returning to Pitzer, Jesse came out of his summer with a new passion to learn. He changed his major to human biology. He wanted to learn the science of the condition that he’d had for the last 10 years. “I already knew the feelings of it,” he says. “But to sit at the table with scientists and people that can actually change these things… it was awesome!”

Actually, he said “it was awesome!” three times. You know someone is excited about something when they pull a verbal hat trick. 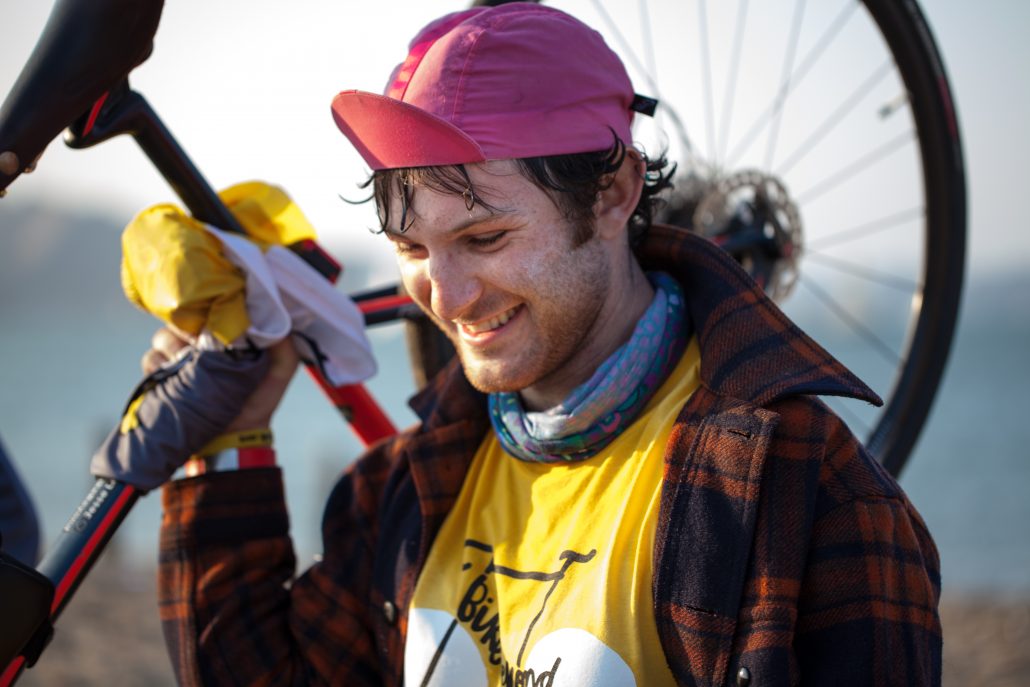 It took ten years for Jesse to accept his diabetes, but now, he inspires everyone around him that you can do anything with type 1. Photo: Whitney Freedman

“Jesse is a catalyst,” says his friend Will Deheeger. “Wherever he goes he’s always getting things started and connecting people in the right ways to make productive things happen.”

That’s just what he did back at school. Through connections he made while in Boston, Jesse brought the College Diabetes Network to the Claremont Colleges, a consortium made up of 5 undergraduate colleges and 2 graduate schools. He also started writing content for Beyond Type 1, where he learned for the first time about their cross-country ride to raise awareness for diabetes, Bike Beyond.

Initially, Jesse didn’t know if he could complete the ride: unrelated to diabetes, sciatica pains had kept him in agony through much of his first semester of senior year. After an operation for a herniated disc, though, Jesse knew he had to try.

“I healed for two months then I worked my ass off to train and get ready for this ride.” He was also simultaneously working on his senior thesis, and performing research for Dexcom, the company that makes the meter he wears to track his blood sugar.

“Yeah,” he laughs. “That last semester was really hard.”

It’s true. You can do anything with type 1.

That’s an understatement. Not many people can bike 4,200 miles. Let alone with diabetes. Let alone just months after recovering from surgery. And that’s not even to mention his half-beard. But like his role model, Steve Richert, Jesse’s trying to prove a point.

With the Bike Beyond ride behind him, Jesse shows no signs of slowing down. Case in point: he’s currently putting together a diabetes app for kids. Similar to a Tamagotchi, Jesse’s app treats diabetes like a pet, which you have to feed and take care of, lest its blood sugar get too high or low. Jesse hopes the app will teach kids to get a grip on the mental math involved in constantly considering food, exercise, and insulin.

How does he have time to do all this? Jesse coyly admits he spent a lot of time working on his pitch deck for the app during his bike ride.

It’s true. You can do anything with type 1. 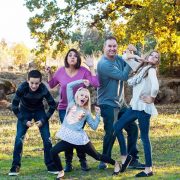 Doctors, Stop Gaslighting Women in Pain
Don’t miss one more amazing story.
Every week, we’ll send a few of our favorite stories to inspire you.
Send this to a friend
Scroll to top