He Shoots, He Scores

Born with spina bifida, sled hockey star Billy Bridges is more motivated than ever as he heads into his fifth Paralympics.
spina bifida 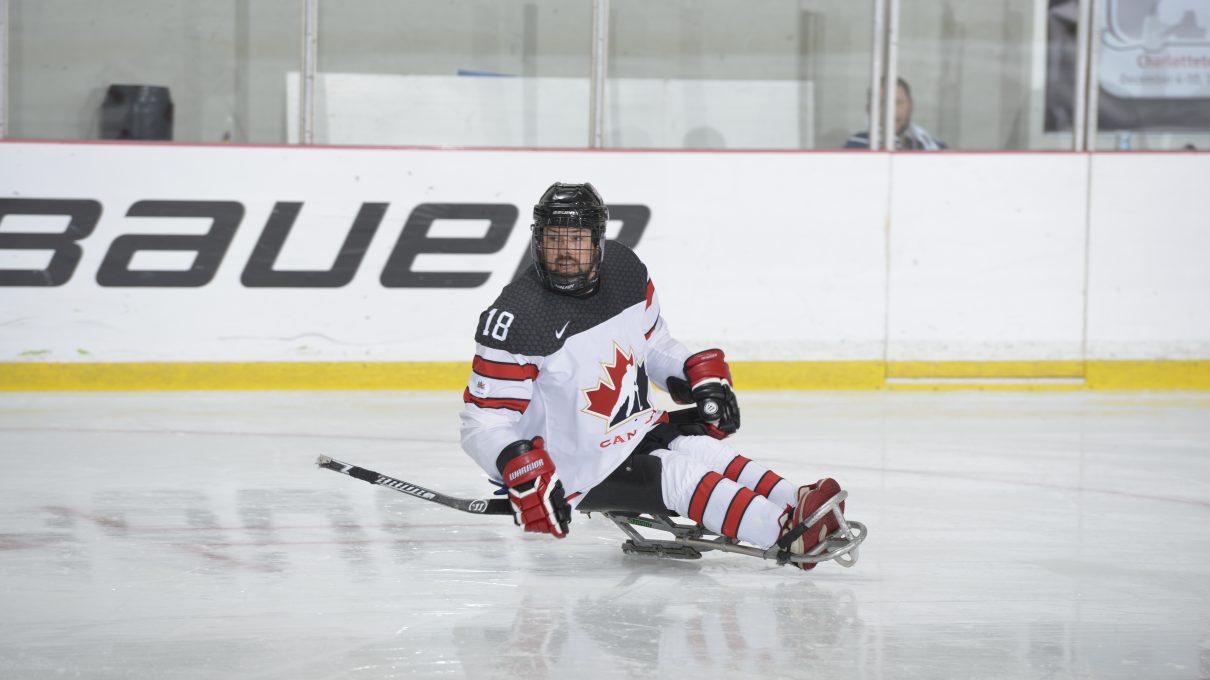 The sport he plays is known officially as “Para ice hockey,” as “sledge hockey” in his native Canada, and as “sled hockey” in the United States. But whatever you call it, there’s no missing the 80-mile-per-hour, one-handed slap shot of Billy Bridges.

Being born with spina bifida (a spinal cord disability that affects mobility) hasn’t held back the Canadian national team’s all-time leading scorer. Bridges, 33, led his homeland to the gold medal at the 2017 world championship in Gangneung, South Korea – also the site of the 2018 Winter Paralympics. There, the Toronto resident is eager to claim Canada’s first Paralympic hockey gold since the 2006 tournament in Turin, Italy. His chemistry with longtime teammates Brad Bowden and Greg Westlake makes that hope realistic, even against the two-time defending Paralympic champion Americans.

This colorful four-time world champion was just 14 when he made his national team debut. He’s also played international wheelchair basketball, which has taken him everywhere from Australia to Argentina, but his heart is with hockey. Though known for his rough-and-tumble style, Bridges has also studied English literature at the University of Toronto. In 2011, Bridges married Sami Jo Small, an able-bodied Canadian female goalie who won two Olympic gold medals before co-founding the Canadian Women’s Hockey League. They have a two-year-old daughter named Kensi.

With the clock ticking down to the Paralympics, we caught up with Bridges, whose articulate candor and wide-eyed appreciation for his sport are infectious. 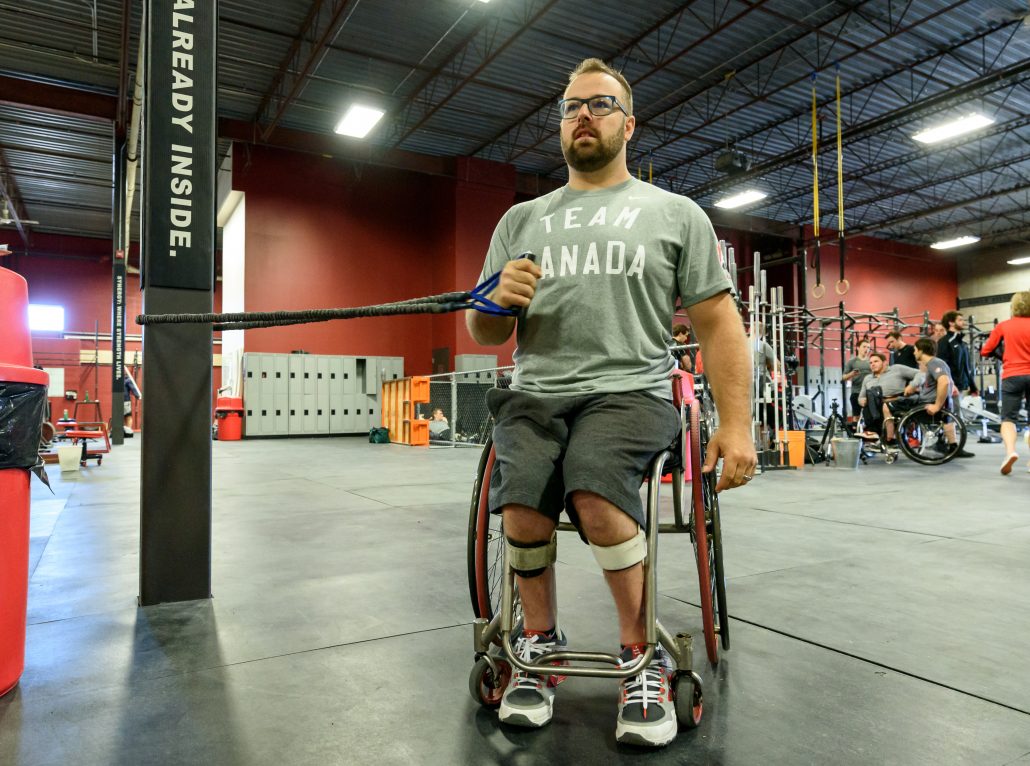 How would you describe your daily training?

Usually, we’ve got two hours of ice in the morning. And then a quick little break, and then we go for a strength workout. And then we usually go from there to physio or anything to keep our bodies going, hot tubs, anything like that. I usually have my daughter for the whole afternoon or evening, and then we do cardio at night or some stretching.

My favorite workouts are real heavy strength stuff. I’ve always been lucky to put on muscle pretty easily. Circuits definitely kick the crap out of me, so I hate them. Or long-distance cardio.

What’s behind your big shot?

I spent countless hours in the basement and garage in my dad’s house, putting pucks through the wall. I think it had a lot to do with those sticks we used to make. They probably weighed two or three pounds and they were about a foot and a half long. I used crutches growing up and I always wanted to skateboard, so I was skateboarding on my crutches. Probably all those things developed my wrist strength. I think I just fell into the right technique.

As a kid, I was really intrigued by the NHL All-Star Game. Whenever we got empty ice, I’d get my buddy to pass me pucks and we’d hang up plates from the crossbar and try to hit them like Ray Bourque. I always wanted to have a big slap shot like Al Iafrate or Al MacInnis. Then as I started playing myself, I became a fan of powerful Canadian forwards like Rick Nash and Sidney Crosby. Those would be the guys I try to model my game around now. 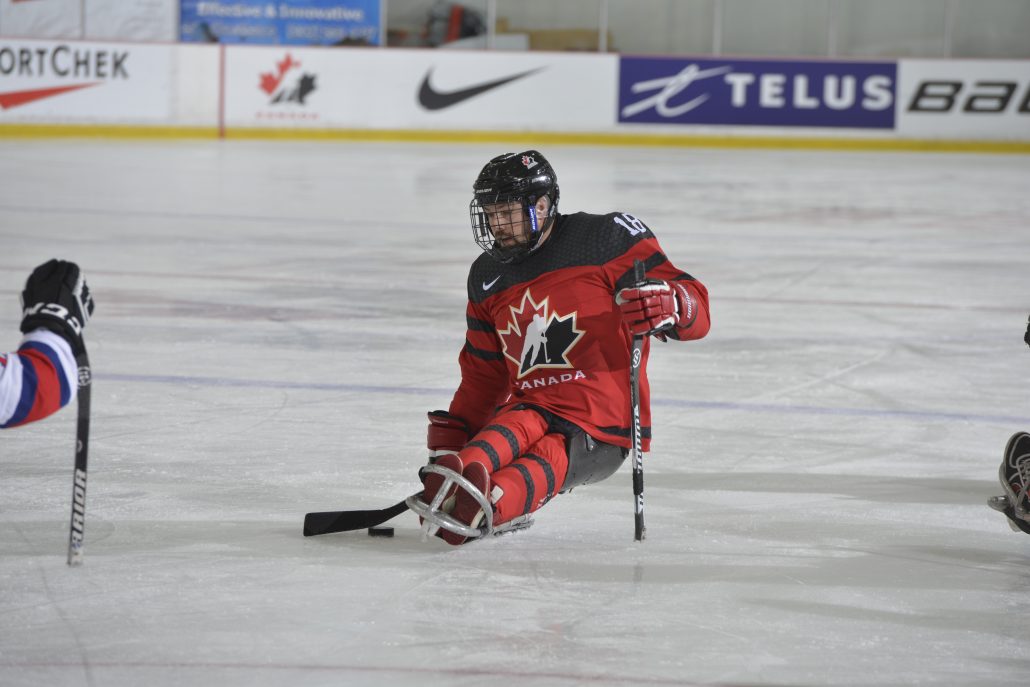 What kind of music fueled you as a kid?

I was in metal bands growing up. Especially looking back now, I think I had a pretty rough childhood. Obviously a lot of it was my own doing, not understanding where I fit in and not understanding the criticism I would get from people. I would take it all to heart. All of a sudden you’re mad at your mom and you’re mad at this and that. Metal was my way to release it.

Back in the day, I loved Deftones, Korn, and Slipknot. The old heavy stuff. I’d listen to a bit of Iron Maiden and Metallica, but pre-game was definitely a lot heavier stuff. But it would throw me off so much! I’d be jacked and pumped, and I’d go out there and bring my arms up and try to kill guys. It made me pretty intimidating. A lot of times, I’d go after people and they’d just leave the puck. That’s how I got a lot of my steals and my points growing up. It wasn’t until a few years ago I realized I needed to harness something different than angst.

It wasn’t until a few years ago I realized I needed to harness something different than angst.

Can you share some memories about beating Norway 3-0 in the 2006 Paralympic gold medal game in Turin, Italy?

Before the gold medal game, Brad Bowden and I both thought we were leaving at 3:15 pm. It turned out it was actually 2:45! Brad was on the phone with his grandma, shooting the breeze. I was playing video games because the Olympic Village always has the coolest video games area ever. We were just mucking around. Then our staff comes up: “Guys! We’ve been looking for you for 20 minutes! The bus is leaving!” We were like, “Oh no!” We ran and got in. It was funny just how loose and carefree we were. We looked around and some of the veterans were a little panicked. But we clearly carried that looseness right into the game.

The play really shows, when I watch that game, the level we were at. On the second goal, I was going to dump it in and it went off a player right to Brad. He dangled past three guys and got it back to Greg Westlake. It was pretty cool. Also, the number of shot-blocks we had in that game was pretty incredible. Fortunately, Norway had a lot of predictable shooters. We were able to get in front of them. We had a lot of injuries, bruises and broken ribs in that tournament, but it was so worth it in the end. 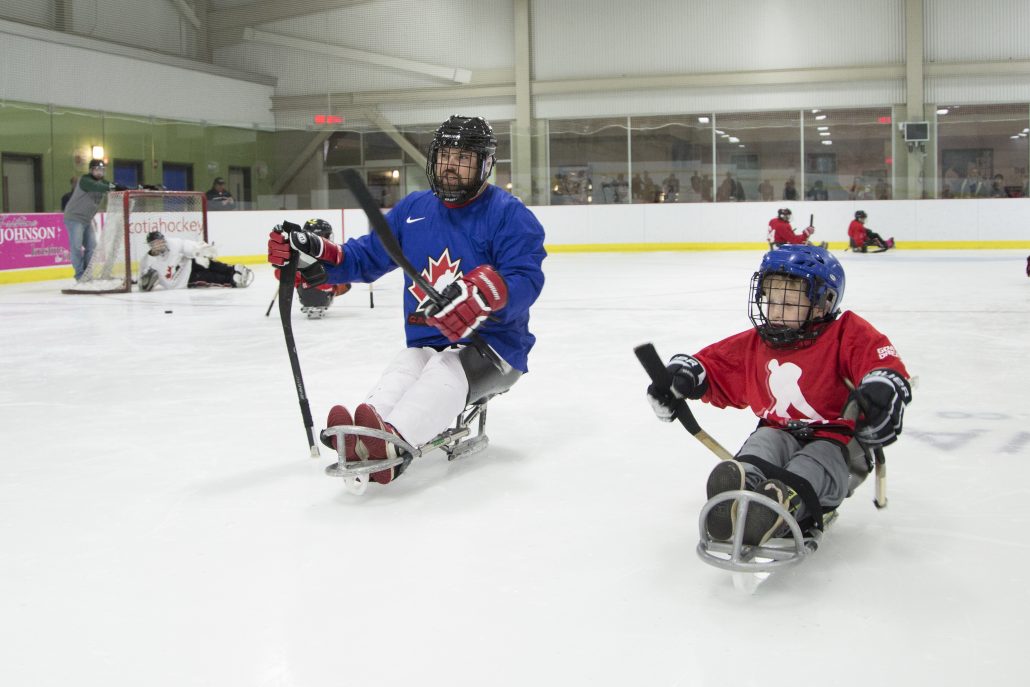 What has having a daughter meant to you?

It’s given me such a perspective on life that I never thought I’d have. It blew my mind. I was raised by women, so I always wanted children growing up. Me and my friends, who were always girls, we’d always name our kids and think about what sports we’d want our kids to do. It was funny because Sami had all guy friends, and when it came time to choose names, that was the first time she’d even ever thought of it! So we had a lot of debates about that.

It’s incredible how much you can love something in an instant and how every single day Kensi lights up my life so much. It’s so much fun to come home to her after training or even a tough loss. You come home and she’s screaming “Daddy!” and running at you. It’s such a life-changer.

What’s the biggest life lesson that you pass on to other young people with spina bifida?

A lot of times, I’m trying to pass on lessons to the parents of those kids. Especially now being a parent, you understand where a lot of them are coming from. I’ve seen so many people with the same abilities I have really deteriorate to the point where it’s bad. When you get too much help from your family and your parents, they can set you back years. I was pretty lucky that my mom was so strict and made me do chores, and that my friends encouraged me to go skateboarding and play sports despite my disability. 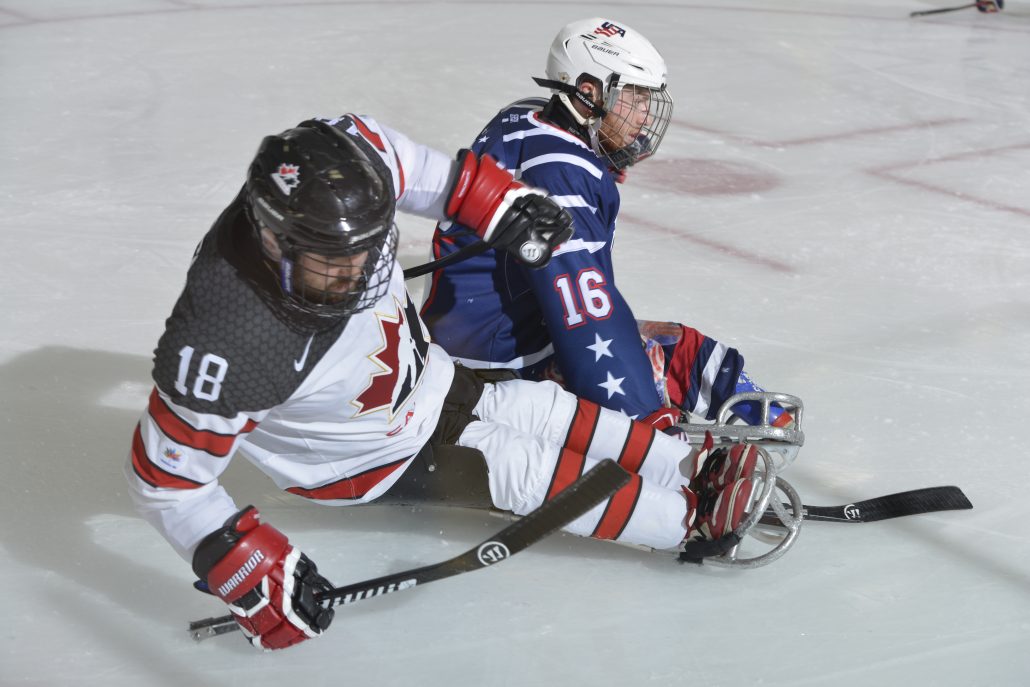 I encourage people with spina bifida to find their niche, find their sport. Understand that with our disability, you can play any sport you’d ever want to play. Find which one you love the most and stick to it. There are so many times when we’re praised as disabled kids for just doing normal things instead of being continually pushed. That’s what I try to encourage parents to do.

There are so many times when we’re praised as disabled kids for just doing normal things instead of being continually pushed.

What are your goals for the future?

My goal is more of a day-to-day goal than it used to be. Obviously I want to win a Paralympic gold medal. But I’ve refocused in the last year to really have a daily or weekly goal in my training and live that disciplined lifestyle that our staff and more experienced veterans back in the day used to talk about. I never felt like I needed it. Now that I’ve done it, I’ve seen where it’s taken my game. My goal now is to continue doing that and see how far it can take me. I’d love the opportunity to play on this team for another four years while keeping as strict as I can, to see how good I can get.

Now I’m trying to step up to guys on our team who are extremely fast and trying to beat them in races. I never used to have that competitiveness when I was younger. If we were racing for a puck, I’d always let the guy get it and try to find a way to hit him off it. I never had that “I need to be there first” racing mentality. But I find with my discipline that’s coming, it’s more of a natural thing. I feel like every shift I’m thinking about putting in hard work, just like with my training. I want to see how far I can take this. 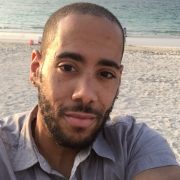 2017: Our Favorite Profiles
Don’t miss one more amazing story.
Every week, we’ll send a few of our favorite stories to inspire you.
Send this to a friend
Scroll to top