Online abuse among people with health conditions is on the rise. Luckily, so are support networks.
fibromyalgialupusptsd

Mike Robinson isn’t one to shy away from an online debate. But he was forced to change his approach after an email quite literally floored him.

The email pinged into his inbox after a robust Facebook debate. Thanks to his role as an outspoken medical cannabis advocate, Robinson is easy to find online. Not for the first time, someone had taken their beef with the Santa Barbara, CA man into email.

Annoyed, Robinson hastily scrolled down the message, peppered with “colorful language”, to tap out a reply. But in his rush, he missed the grenade lying in wait.

“I didn’t see it at first but when I scrolled down I saw a flashing gif in the email. It hit me, I had a big seizure,” Robinson says.

Earlier this year, a study by the British charity Leonard Cheshire showed that reports of online disability hate crime grew by a third in 2017-2018.  The charity warned the statistics revealed “the tip of the iceberg”, estimating that many instances of online abuse go unreported.

There are no equivalent US figures, but Pew Research Center (PRC) figures from 2017 show that 4 in 10 Americans have experienced harassing behavior online, with 1 in 10 Americans reporting being targeted for a physical characteristic.

For Robinson and others with epilepsy, abuse doesn’t get more targeted than a flashing gif, a guerilla tactic employed in online arguments.

“It’s common knowledge that flashing lights or images cause seizures in epilepsy. So in the comments, the argument escalates and then the troll will just throw a flashing GIF up. So now you have a lot of people with epilepsy watching it at the same time.”

How A GIF Changed How One Person With Epilepsy Interacted Online

Robinson’s had epilepsy since the high speed wreck that ended his career as a Nascar driver in 1995.

Everything changed when he discovered cannabis oil, which transformed his health overnight. The former civil rights lobbyist began to treat himself and work towards helping others treat epilepsy in the same way.

Being visible online for his work as a compassionate cannabis activist has made Robinson a target for abuse. Although he’s the kind of guy who won’t hesitate to stick his head above the parapet, it hasn’t been easy.

“I used to be a reactive person, I’d respond, and I’d get upset.”

After the email that triggered a seizure, Robinson changed his approach.

“50,000 people a year seize to death. Would you want to be responsible for your comment to cause someone’s death?”

“I stopped the way I reacted, and I began to respond with facts. I’ll say, 50,000 people a year seize to death. Would you want to be responsible for your comment to cause someone’s death?”

Often, the bully will step away, he says.

It’s not easy to win an argument on the internet. But Robinson believes he’s making a difference. “I believe I’m changing minds.”

What To Do When Reason Doesn’t Work

When reason doesn’t work, Robinson won’t hesitate to bring out the heavy artillery, filing complaints with the US Department of Justice under the Americans with Disabilities Act.

Robinson believes people that engage in bullying activities are not considering the outcome.  “As somebody who has lost dozens of friends to epilepsy, I take it beyond seriously.”

About half of people who have been harassed online say their most recent incident involved a stranger, while nine-out-of-10 Americans believe the ability to post anonymously fosters online cruelty.

“It’s rare that someone you meet face-to-face will go on to abuse you online,” he says.

Blake should know: he’s met almost 29,000 people over the last three years on a personal quest to heal his post traumatic stress disorder (PTSD) and earn a spot on The Late Show with Stephen Colbert.

In 2011, Blake was raped by three men in his Phoenix home. His journey with PTSD has been long and complex. Three years ago, at rock bottom, he was contemplating ending his life when he found himself chuckling at a gag on Colbert’s late night show.

“I realized I could still laugh,” he said.

The moment spurred a literal and figurative journey. Each day, Blake walks the streets telling his story to whoever he meets, carrying poster boards for people to sign in support of his bid to appear on the show.

The quirky quest has captured imaginations, and Blake has appeared on a few news segments.

After an appearance on an episode of Inside Edition, he scrolled through the comments on the television show’s Facebook page. He was horrified to find himself the target of abuse. “There was a man making fun of my rape, making snide comments.”

Why Online Abuse Sets Back Recovery

“It can be so potent when you see [abusive comments]. It’s so destructive, so visceral. Not only that, it could impact people who follow my journey. When people read comments like that, maybe they won’t feel like they can share their stories.”

Blake’s sentiment is backed up by research. PRC figures show that just over a quarter of Americans say they have decided against posting something online after seeing the harassment of others, while more than 1 in 10 say they stopped using an online page after seeing harassing behavior.

“We have to feel we have that ability to come forward and share our stories,” Blake says. “We want to share in a safe space and know they will be supported.”

Blake has his own Facebook page where he chronicles his journey. He takes comfort from the knowledge that for every negative remark, there are many more people behind him.

“There are thousands of people who support me. I have amazing supporters behind me, they want to see me recover.”

“At first, I felt I had to allow everyone a chance to speak. But now, if you are going to be destructive I will block you.”

Some of the comments are based on ignorance, Blake believes. Others come from pain. “I got a message from someone saying, nobody cares that you have PTSD. Nobody cares anymore, move on. It was so vile, I was repulsed.”

Later, the empathy Blake’s friends tell him is his best and worst quality kicked in. “I thought about it that night, I feel like he was hurting. He was in pain. He was angry about something. I wondered what I could do to help him but he lived far away.”

When You’re Abused Online, Where To Get Help

In a constantly shifting online landscape, it’s difficult to know where to turn for help. A lack of clear, coherent help available prompted Liz Lee to set up Online SOS three years ago. The website offers resources and information for people who have been targeted online and outlines preventative measures.

It’s the resource she would have liked to have seen when she was harassed online a decade ago. “I had an experience being stalked and targeted anonymously and extorted online,” she remembers. “There wasn’t much information on what to do; I thought I was the only one, and I wasn’t able to talk to anybody about it and process it.”

“I had an experience being stalked and targeted anonymously and extorted online… I thought I was the only one.”

Online SOS outlines different types of online harassment and walks users through the actions they can take to keep themselves safe and report the abuse to the relevant authority. The site is geared towards people in public life: journalists, activists, streamers and bloggers. But the truth is, no one is immune to online harassment, she says.

“It could happen to anybody.”

Why Online Abuse Is On The Rise

Lee believes there are a couple of factors behind the rise in reported online harassment. Firstly, people are reporting online abuse in ever greater numbers. “Public consciousness around privacy, the misuse of social media and digital communication is greater than ever,” she says.

It’s also a reflection of what’s going on in real life, where hate crimes — crimes targeting people who belong to certain groups or have particular characteristics — are growing, she said.

Knowing When To Get Help

If you’re targeted online, the most important thing you can do is document the harassment, Lee says.

“Documenting when you’re in a state of distress is challenging, for anybody, it’s not because you are weak and incapacitate it’s because when you having these negative communications your brain is negatively changed.”

That’s why it’s important to reach out for help, she says. “Having your friend let you know this isn’t okay and they have your back, this could make an enormous difference.”

Why Social Media Is Important For Those With Health Conditions

For many people with a disability or long-term condition, social media is more than just a past-time: it’s a lifeline.

“A lot of us are isolated for a long time, and Facebook groups are a window into the world,” says Lauren Zalewski.

But sometimes, the very communities that are meant to bolster people can be toxic, she says.

Zalewski has battled lupus and fibromyalgia for two decades. Six years ago, she went through what she calls a “dark period”, where she turned to alcohol to battle the chronic pain.

“It got really nasty.”

When she looked for social media groups to join for support, Zalewski was surprised to find an undercurrent of toxicity in the online communities she frequented. “It was always a discussion about, who’s the worst off. Someone’s pain levels can be different but everyone is dealing with the same emotional pain.”

Fed up with the competitive comments, Zalewski started her own group to counteract the negativity. Attitude of Gratitude with Chronic Pain now has 5,000 members.

The group focuses on fostering a positive outlook. “I’m not telling anyone to wipe it under the rug, but we need to escape the negativity because we live with it all the time,” says Zalewski.

When she created the group she ran an advertising campaign to seek out more members.  “I got many nasty comments saying, I must not really be in pain. A lot of really nasty, negative stuff.”

Zalewski acknowledges how hard it is to stay positive when pain dominates your life, and she’s generous when she considers the origin of the unpleasant comments.

“When your abilities have been taken away from you, abusing someone else can give you a taste of power you used to have.”

“I’d like to think the pain has something to do with it. When there’s no end in sight to your chronic condition, that’s a biggie. When your abilities have been taken away from you, abusing someone else can give you a taste of power you used to have.”

Sending out negativity into the world is fruitless, especially when everyone’s in the same boat, she says.

“I’m not always the most pleasant person, and I know we are all on pins and needles, but we should try to be on the same side.”

However, she has no plans to step away, choosing to concentrate on the positive aspect of social media.

“If I have to be sick, I’m grateful it has to be in this era of social media. As much as family and friends try to understand they can’t.” 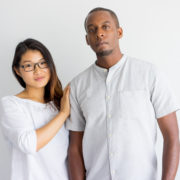 How Motherhood Forced One Woman To Confront Her Hearing Loss
Don’t miss one more amazing story.
Every week, we’ll send a few of our favorite stories to inspire you.
Send this to a friend
Scroll to top