How Climate Change Is Hurting Our Health 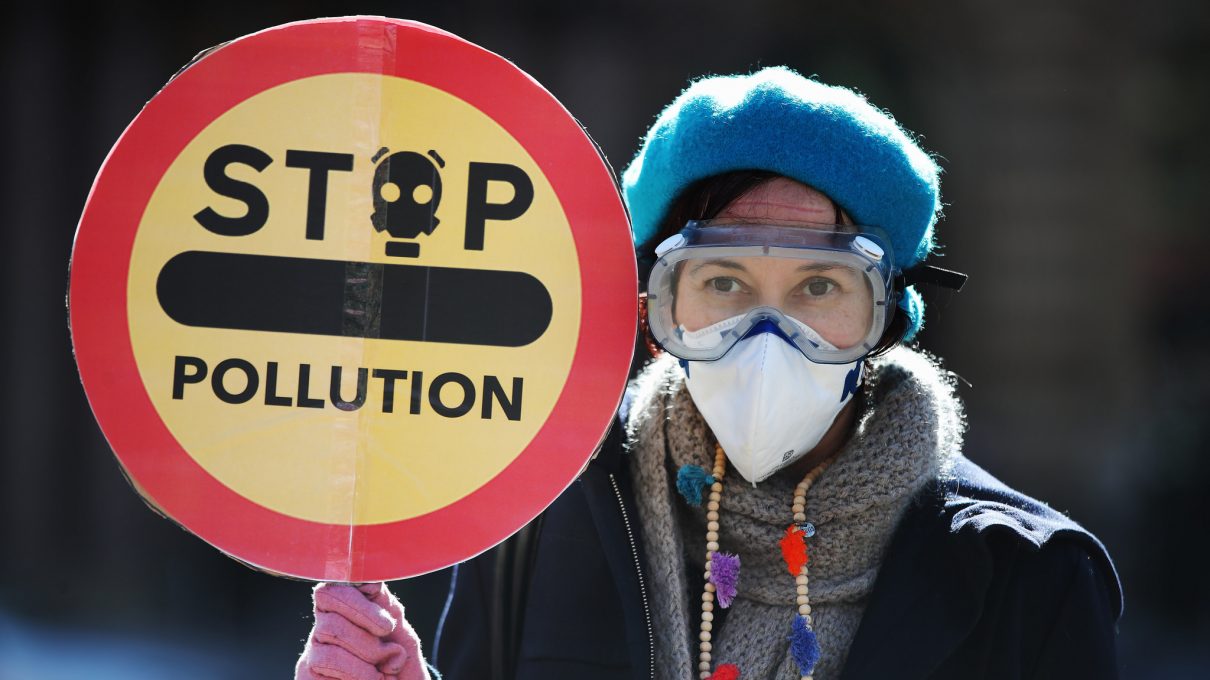 Climate change can seem like a problem so much bigger than an individual person. But even outside of flooding coasts, hotter summers, and freakier storms, climate change is deeply impacting our health on an individual level. But just how much? Enviromedics: The Impact of Climate Change on Human Health, a new book from two experts on emergency medicine, addresses just that million dollar question.

“If things are going bonkers weather-wise in our neighborhoods and regions it doesn’t take much imagination to understand that it affects our health,” explains Enviromedics co-author Dr. Jay Lemery, an associate professor of emergency medicine at The University Of Colorado, who wrote his book alongside his mentor Dr. Paul Auerbach, a professor in the Department Of Emergency Medicine at Stanford.

And those effects, which Lemery has seen first-hand as part of his own practice, can be severe, such as pre-existing conditions like asthma exacerbated by extreme heat, or allergic reactions that last for whole seasons.

In myriad ways, some discreet, others overt, climate change imperils global health. “Ecosystems are suffering and we are inextricably linked to the places we live,” says Lemery. We spoke to him to learn more.

How did you go from emergency medicine to climate change science? 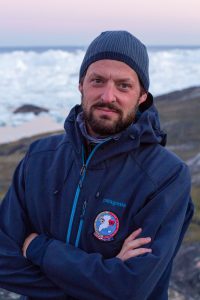 Dr. Jay Lemery wrote Enviromedics because he sees climate change as the greatest health crisis of our time.

Out of residency, I took a job at Weill Cornell Medicine teaching wilderness medicine. It was ‘how do you take care of people in remote austere places?’ ‘How do you practice without advanced technology?’ I had been a resident during 9/11 and started at Cornell in 2004; disaster medicine was everywhere. I really dug it because it kept true to the core principles of medicine, of innovation and physical diagnosis. Somewhere in there I began to think about climate change and environmental degradation. The science was being politicized. I thought, this is crazy. I did a lot of contract work for the National Science Foundation supporting Arctic research, tons of which is climate related. I was also a past president of the Wilderness Medical Society, a nonprofit academic organization. We would help establish the Everest base camp medical clinic during climbs.

We were in these spectacular places, supporting researcher’s health, supporting the science, and I just noticed this glaring absence of the medical community in this conversation on climate change when it is so clearly affecting our health. That was my big moment.

“I just noticed this glaring absence of the medical community in this conversation on climate change when it is so clearly affecting our health.”

What did you think the conversation was missing?

So much of the conversation around climate change is about polar bears or abstract concepts like parts per million of carbon dioxide which, if you study this stuff you know is a big deal, but for the layperson means absolutely nothing; just a number, literally, out of thin air. I thought, we have to do better.

As doctors, me and Auerbach know sickness. We’ll be seeing a lot more of it in the future because climate change will be a driver for sickness. In our book, we took composite vignettes of the patients that we see everyday. These are not specific cases but are the natural extension of the data we’re seeing. We know extreme heat drives morbidity and mortality for people with preexisting illness; we know what heatstroke looks like; etc. So then instead of talking about polar bears you’re talking about your parents’ risk of chronic lung disease and your kids’ risk of asthma.

My own sister lost her house in Vermont during a hurricane in 2012, when all of northern New England got nuked by extreme rain. A little beautiful stream diverted into her living room, turning into a river. These are real things. Talk to people in California about their wildfires. The air is degraded; people are losing their homes; huge swaths of land are gone; people are dying. There’s nothing healthy about that.

“The air is degraded; people are losing their homes; huge swaths of land are gone; people are dying. There’s nothing healthy about that.”

Heat waves can kill people but very few people die from heatstroke, relatively (although we’re seeing more more of that this summer in India and the Middle East, where you have very vulnerable populations who just cannot cool down). It’s really the people with chronic obstructive pulmonary disease or heart attacks or congestive heart failure who die. Heat makes their bodies work harder. When you’re walking around on a hot day, your pulse goes up, you’re working harder to sweat. That’s enough to push someone over the edge. 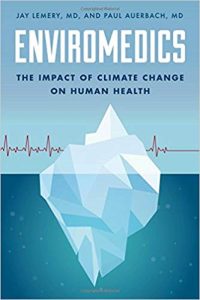 The cover to Enviromedics: The Impact of Climate Change on Human Health.

Extreme weather, too. Hurricanes kill people and destroy infrastructure. Look what happened in Puerto Rico and Houston. In Houston, a tremendous downpour caused catastrophic flooding and people were killed and internally displaced. In Puerto Rico you had a relatively vulnerable place get pummelled (I was part of a study that pointed out that the death rate was in the thousands, not 64 as the government said at first). Try living in Puerto Rico without power for nine months; that’s a big hit to your health and wellness.

Another one: Part of the bedrock of public health is that we separate the areas where we eat, go to the bathroom and grow food. But when we have a heavy downpour, which we’re seeing more of, you end up blending all those places. That’s water insecurity. Even in Boston or New York you can’t drink the water for a few minutes after an extreme downpour because it overwhelms the sanitation pumps. Now that’s just a couple minutes of inconvenience but in many places in the world your food is compromised; sewage has contaminated your crops. That’s where you get these horrible diarrheal diseases. Diarrhea is still one of the biggest killers of children across the world. Water insecurity is a huge deal.

What are the biggest climate-caused or exacerbated health issues?

Even among climate scientists, there’s debate. Is it extreme heat? Is it the rise of sea level which will make coastal living impossible? I think that, between extreme weather and the increase in temperatures, climate change will undermine our food supply. Food security will have the biggest health effects worldwide because it will undermine our access to nutrition. Lack of nutrition is a wonderful way for disease to thrive. That’s going to be the biggest, I think.

“Food security will have the biggest health effects worldwide because it will undermine our access to nutrition. Lack of nutrition is a wonderful way for disease to thrive.”

What are some of the more subtle ways in which climate change affects health?

Take allergies. The aeroallergen ragweed and pollen levels are going bonkers because they’re responding to higher CO2 levels. Seasonal allergies are lasting longer than they have before, particularly in northern cities. In Canada there’s good data which says ragweed allergies used to last for only a couple of weeks a year; now it’s months. That doesn’t kill people. But if you suffer seasonal allergies you’re incapacitated for the time you’re outside. You’re miserable.

Ticks and mosquitoes, which carry tropical diseases like zika, yellow fever, dengue and malaria, are moving higher in latitude and altitude. In the East African highlands people who have been historically spared from malaria are now susceptible. It’s a double whammy: more people getting malaria and those getting it have no tolerance. We’re going to be seeing more of this in the U.S. as well. Lyme now exists in all fifty states; that’s unprecedented. There’s no mystery to it. Bugs like warmth.

Yet, if you think about what’s happening it’s not just global warming. Although rising temperatures is one of the drivers what we’re actually witnessing is a global energizing. We are energizing a very complex system, the planet. I’ve had people in climate communication say not to use that word because it’s too optimistic. Katharine Hayhoe out of Texas calls its global weirding, which I think is very effective. It’s really what we’re seeing. The weather is just wacky, with more crazy anomalies we haven’t witnessed before. Climate change is crazy town.

What sorts of climate-related issues do you see in your own emergency room in Denver?

On hot days we see tons of people come in with chest pains, shortness of breath or exacerbations of their chronic illness. Extreme heat exacerbates preexisting conditions. On those days with heavy wildfires we’ll see exacerbations of asthma. Researchers who look at these things aggregately are able to see spikes from these weather anomalies.

That issue of causality is interesting. When can one definitively blame a health outcome on climate change?

You don’t need direct causality to be a threat multiplier. There are great epidemiological methods to tease out different variables–if you look at our book it’s all right there. Causality, when you see it, is important. But it’s also important to acknowledge that we cannot definitively prove this. For example, the 2003 heatwave in Paris was beyond historical experience. Fourteen thousand people in France died, 32,000 in northern Europe, a very well resourced part of the planet. Can I definitively say that was due to climate change? No. But what you can say is that this heatwave is beyond historical experience and that we know we’ll be seeing more in the future. Undoubtedly the data we’re seeing from temperatures across the planet are driving more extreme heat events and we know that this is a threat multiplier for health. Let’s not be naive.

You can purchase Enviromedics: The Impact of Climate Change on Human Health on Amazon. 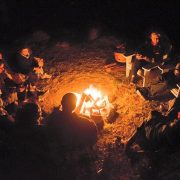 Fighting Off Hypochondria in a Mexican Shaman’s Temazcal
Nikki Vargas
A Brain Infection Destroyed My Marriage, But Made Me A Writer

The Sight-Challenged Survivor Of 9/11
Don’t miss one more amazing story.
Every week, we’ll send a few of our favorite stories to inspire you.
Send this to a friend
Scroll to top