After saving her husband's life from an antibiotic-resistant infection, Steffanie Strathdee is trying to bring phage therapy to the rest of the world.
bacterial infectionsinfectionsphage therapy 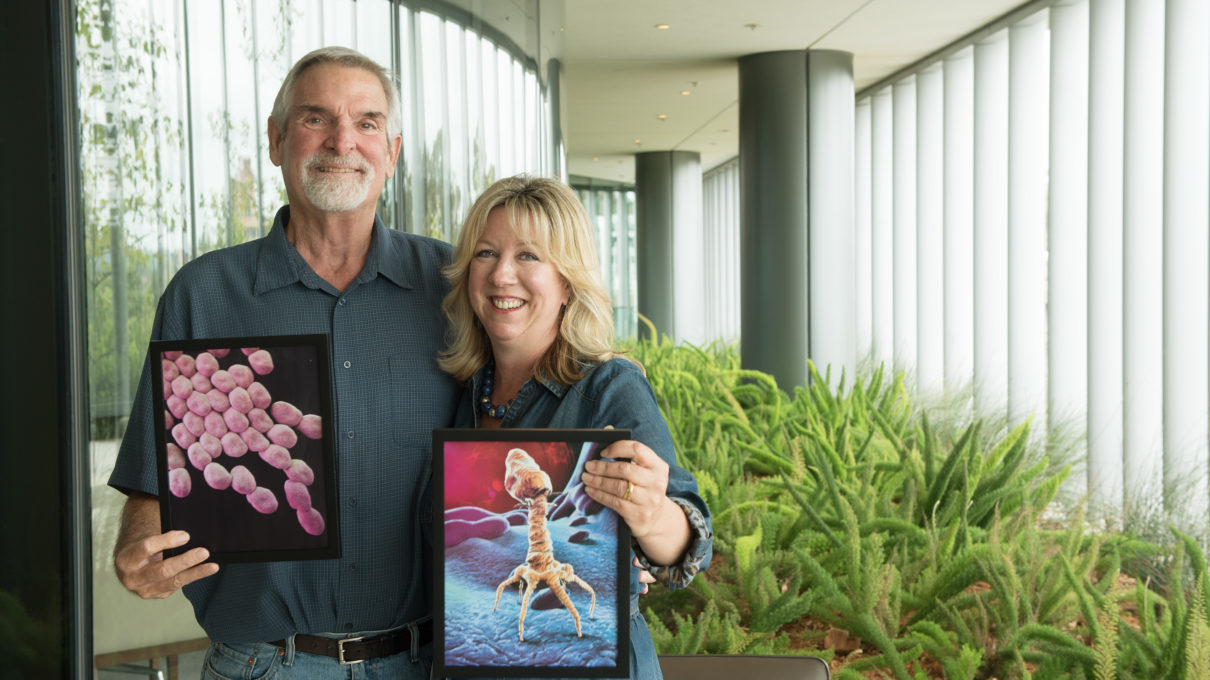 In 2015, Steffanie Strathdee and her husband Tom Patterson were vacationing in Egypt when Tom suddenly became very sick. It seemed to be just a stomach bug, but no medicine helped; it only worsened. Steffanie took Tom to an Egyptian clinic. When nothing could be done there, he was medevaced to Germany, where his health further deteriorated. Tom, it was discovered later, had come down with a superbug, a kind of bacterial infection that is resistant to the regular suite of antibiotics hospitals use.

Such infections are an increasingly formidable foe. The World Health Organisation, in an alarming recent report, calls superbugs “a global crisis that risks reversing a century of progress in health.” In both wealthy and developing nations, at least 700,000 people a year perish as a result of them, according to the report. By 2050, the number could reach 10 million—more than cancer or car accidents.

After Germany, the couple went home to San Diego. At the University of California, San Diego, where Steffanie works as an epidemiologist, she dug in. Desperately combing through obscure medical journals seeking a cure for her dying husband, she came across phage therapy. Phages are viruses that parasitize bacteria. Our world is full of them. They live near their prey, in sewers, garbage dumps, us. Though existing for millennia, it is only in recent years that medicine has employed them against superinfections. Steffanie convinced Tom’s doctor to give it a shot. They injected him with phages. His condition improved almost immediately. He survived (the whole ordeal is chronicled in Strathdee’s book, The Perfect Predator).

That last-minute discovery saved Tom’s life and changed Strathdee’s. She now heads the newly opened Center for Innovative Phage Applications and Therapeutics at UCSD, one of only a handful of such centers in the world and the first in North America. Their work is of enormous consequence. “By 2050, one person every three seconds is going to be dying from a superbug infection,” says Strathdee. “There’s no rainbow on the horizon to turn that around right now, no antibiotics that are wonder drugs like penicillin that are going to turn back the clock. The horse is already out of the barn”

But while impressively effective, phage therapies remain boutique treatments, administered in multi-phage cocktails tailored to the specific nature of a patient’s infection; phages are picky eaters, with each kind only attracted to specific kinds of bacteria. Moreover, in America phage therapy requires special permission from government regulators. And with trillions of phages out there, only a fraction of which are readily available in a few labs around the world, matching phages with patients is immensely laborious.

Folks reached out to Strathdee to hear more about the center’s work and why she thinks that phage therapyis going to change the world.

What is the mission of your new phage theory center?

The mission of the center is to provide patients who have multidrug resistant bacterial infections with access to phage therapy. We facilitate that depending on the status of their case and to what extent they’re eligible for emergency compassionate care. If it’s a life threatening infection but death isn’t immediately imminent we have to go through a different pathway. We intend to advance the research and science, to enable phage therapy to be licensed by the FDA so that one day, hopefully, it will become more of a standard treatment alongside antibiotics.

Is this a golden age for phage research?

There’s been a couple golden ages of phage research. After phages were discovered by Felix Durrell in 1917, in the twenties and thirties there was phage therapy going on and some research, but with a lot of limitations. This was before we even knew that DNA had a triple helix. We didn’t know that phages needed to be matched with specific bacteria. Then when penicilin came on the scene phages were forgotten, though they continued to be used in the former Soviet Union. But we’re entering a new era. The golden era of phage research in the 21st century is beginning. We’ve been told by many now that Tom’s case was a watershed moment that revitalized interest in phage therapy in the west.

And this is happening due to the worsening superbug threat, right?

Yes. More and more doctors are seeing patients that used to be treatable and are no longer treatable.

More and more doctors are seeing patients that used to be treatable and are no longer treatable.

Do you think phage therapy will have as big an impact on medicine as antibiotics did?

I think it can. I don’t think it will ever replace antibiotics but it’ll be an important adjunct. In most cases, we’re treating people with phages and antibiotics at the same time. In some cases we’ve even observed synergy between the phage and the antibiotics. The phage has resurrected a failing antibiotic regimen and made it work again.

What are some accomplishments of the center thus far?

We’ve treated ten patients at UC San Diego. But we’ve treated and consulted on numerous others internationally. We now have a new phage therapy trial funded by the National Institute on Allergy and Infectious Diseases, which is part of the NIH. Just two weeks ago the same branch announced the first request for proposals on basic and clinical science to support phage therapy. That’s the first time that’s ever happened. So there’s been a real sea change. Most people would agree now that phage is the most important alternative to antibiotics being studied right now.

Most people would agree now that phage is the most important alternative to antibiotics being studied right now.

What are some trends in the research you’re excited about?

Well, there’s potential for phage to do more than treat multidrug resistant bacterial infections. There’s companies working on phage therapy to groom the microbiome, to eliminate unhealthy bacteria and keep healthy bacteria, which is more of a wellness approach, as well as companies working on creating synthetic phages. There’s also reports in the literature of phage being used as nano-vehicles to deliver vaccines and cancer therapies. They can even penetrate biofilms on hardware like pacemakers or hip replacements. The whole idea that you can inject phage into somebody safely was one of the innovations of my husband’s case. You really had to have someone dying to warrant doing something so crazy-sounding. We injected a billion phages per dose every two hours for the first couple of days, then every 12 hours for a month. That’s a lot of viruses.  I understand a lot of the science, but I’ve been there personally, too, watching the love of my life almost die. There’s nothing more motivating than having that kind of personal experience.

What are some plans going forward?

Our goal is not to just move phage therapy into clinical trials but to develop the capacity to be able to provide patients with a lot more access. That’s gonna require having a phage bank that’s centralized rather than scattered around in various laboratories all over the world, which is what it is now. Sometimes I even go to Twitter to crowdsource phages when it’s an unusual pathogen. Then we also need a Good Manufacturing Process facility, basically a bioreactor that will allow us to produce high-grade clinical phage. We have to treat this like a living antibiotic. That’s really our approach. Our goal is to build one here and ideally in other locations, like one on every continent. We don’t really have an alternative. By 2050, one person every three seconds is going to be dying from a superbug infection. And that’s thought to be an underestimate.

Stacey Knott
Do you know someone else who would enjoy this story?
What I Learned From Psychedelics About Living With Chronic Illness

Titan: The Seven-Fingered Powerlifter With T1D
Don’t miss one more amazing story.
Every week, we’ll send a few of our favorite stories to inspire you.
Send this to a friend
Scroll to top