How Gardening Healed My Mother After Her Stroke

My 93-year-old mother never really cared about her garden. Then she had a stroke, and growing vegetables became her passion.
stroke 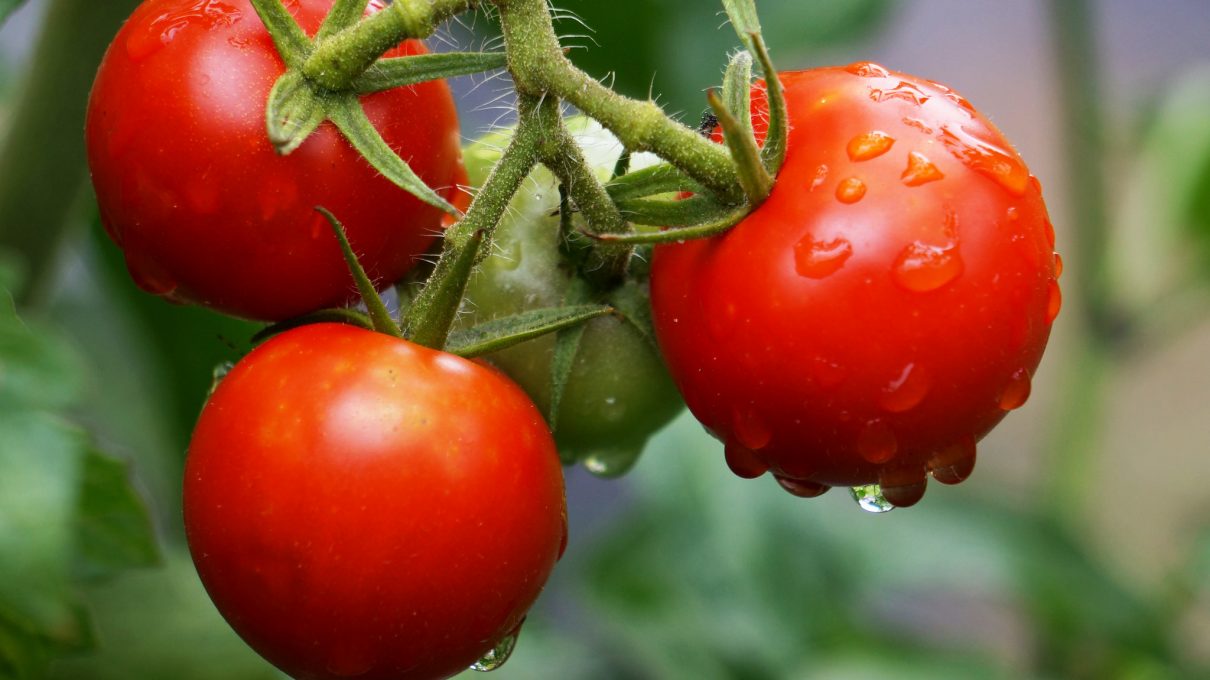 Got a few minutes? Want a chance to win a $250 Amazon Gift Card? We want to know more about why you read Folks. Fill out our survey!

My mother never really cared much for gardening. Something of a black thumb, her interests were more confined to the great indoors: cooking, sewing, reading, and writing. When she did go out into the garden, her pruning was questionable, and her idea of planting was to wander around, sticking geranium twigs into the soil at random. As an 89-year-old widow who lived on her own, I would come by and take care of the flowers and shrubs, but she herself had little interest,

Then she had a stroke. Around four years ago, I was at Mamma’s when I noticed her speech was slurred and sensed something was wrong. Calling an ambulance, we discovered she’d had a brain hemorrhage. The months of rehabilitation that followed left her weak, out-of-sorts, and depressed. When she came home, I moved in for three weeks to provide some TLC, and while she sat in the garden on her doctor’s orders to lift her mood, I set out to make the nearby vegetable patch as fertile as the flowerbeds in the backyard.

In spring, I nourished the soil and planted Roma tomato seedlings. Next, I tracked down seeds for an uncommon radicchio my parents had eaten in their Italian hometown. My father grew the salad green (part of the chicory family) after they migrated to Australia in the mid-1950s. It was impossible to buy locally and since his death 30 years ago we had gone without. Mamma often mentioned it and had the odd craving for it. I sowed the seeds and covered the soil with wet newspaper to protect the crop from the elements. Just like Papà had done all those years ago. 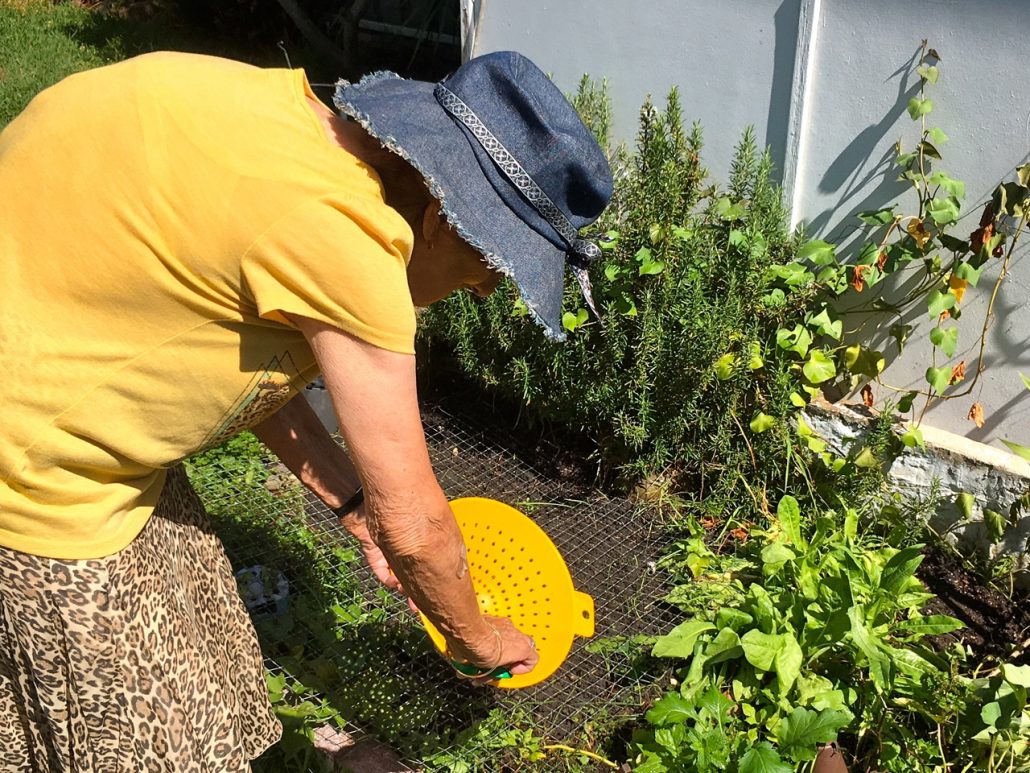 The author’s mother, kneeling to water some plants in her garden.

Since she’d never really cared for gardening, I didn’t expect Mamma to care much about this. But my gardening-averse mum surprised me by showing interest in what I was growing. The word ‘radicchio’ must have stirred up memories of home-grown bitter greens so fresh you could feel them doing you good.

When Mamma regained strength, I moved back home and visited only on alternate days. With rain scarce that summer, the tomatoes and radicchio needed help and I suggested that she take over the watering. With a little persuasion, I convinced her to step into my job. Even before the stroke, Mamma’s arthritis made using her hands painful, but I hoped the task, which didn’t involve complex manual dexterity, would be manageable. It was worth a try.

She instantly took to her task, watering the tomatoes and radicchio diligently every day. And as the green fruit developed, we got excited about the first bounty. Disappointment can’t begin to describe the look on Mamma’s face when the tomatoes remained pea-sized and unripened, many with split skins. But soon, Mamma had laughed away her disappointment. We discussed what we’d do with the three tomatoes we’d salvaged: dice them and arrange the pulp on half a slice of crusty Italian bread? Make a spoonful of killer tomato sauce? The possibilities were hardly endless.

We fared better with the radicchio and did a merry dance around the kitchen table before the first taste-test. We ate it the northeast Italian way: with vinaigrette and hard-boiled eggs.

Later, Mamma’s list of heart and head ailments grew when she had a fall and broke her wrist. Then, six weeks later, she suffered a fracture to her foot chasing those rascally cats from the vegetable patch. I tried to take over the project, but she insisted she should persevere. With a pronounced limp, she kept up watering the plants every day, using Dad’s walking stick in her good hand for support while carrying the dribbling garden hose in her cast. Her tenacity to meet the challenges of aging and illness was remarkable.

Research shows that frail older adults need mental stimulation and regular physical activity. If, like my mother, they still live at home and have access to a garden or green space, they are halfway there.

After our abysmal harvest, I ripped out the tomato vines and planted Warrigal greens (New Zealand spinach), which grow in coastal areas in Australia and tick the ‘no fuss’ box. Out of nowhere, a kumara, or sweet potato, plant appeared. The heart-shaped leaves are edible and have a buttery taste when cooked. Best of all, they don’t attract pests and are impossible to kill. And her garden expanded into herbs and aromatics. Parsley, sage, rosemary, thyme, and basil make our dishes sing; the mint becomes herbal tea; Italian chilli peppers are added to braises; garlic is still a work in progress.

I ring often to remind Mamma to water the crops. At 93, her vascular dementia is starting to play havoc with her short-term memory. But she gets plenty of exercise while she waters and pulls weeds, and the daily dose of vitamin D does wonders for her bone health. And it’s great to see her cooking with home-grown, chemical-free vegetables. The abundance of produce is sometimes too much for us to eat, and the neighbors are happy to help out. We have these surplus donations to thank for her re-connecting with people after a period of social phobia.

What started as a form of therapy to match Mamma’s capabilities as a stroke survivor has become a genuine passion that gives her a sense of pleasure and personal achievement. Research shows that frail older adults need mental stimulation and regular physical activity. If, like my mother, they still live at home and have access to a garden or green space, they are halfway there. 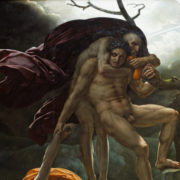 Long Haul Through The Deluge
Sumita Dutta Shoam
Is Medical Crowdfunding Really The Answer To A Broken Healthcare System?

The Battle After The Fire
Don’t miss one more amazing story.
Every week, we’ll send a few of our favorite stories to inspire you.
Send this to a friend
Scroll to top