My own battle with Guillain-Barré, a rare autoimmune disorder, gave me the experience and authority to be there for my grandmother at the end of her life.
bedsoresdeathguillain barré 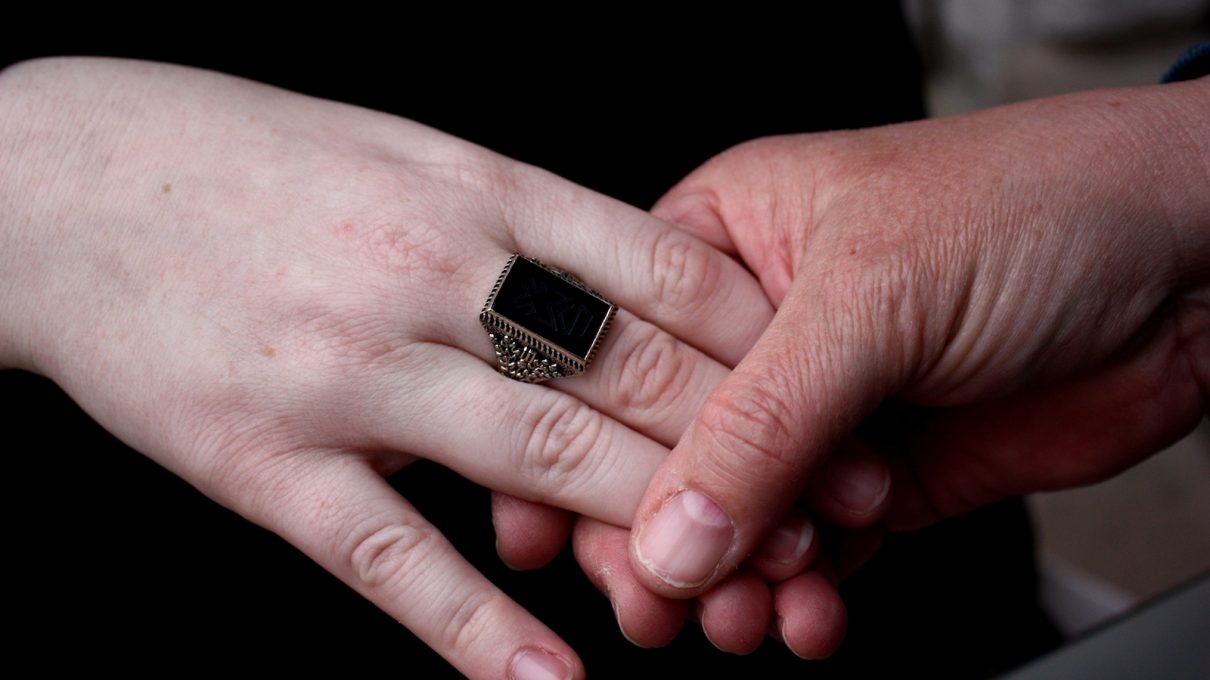 When I was two months shy of my nineteenth birthday, I was diagnosed with a rare affliction that affects one in 100,000 people. While most college students are dealing with heartbreak, I was dealing with Guillain-Barré Syndrome, a rare autoimmune disorder that left me unable to walk, and dealing with excruciating pain. I tried countless medications to impede the disease’s progress. I combatted doctors who didn’t believe me. I took every painkiller you could name. I spent years in recovery. It was hell.

There are many reasons I wish I hadn’t come down with Guillain-Barré. That disease was a real drag. I am also grateful for it because it allowed me to be there for my grandmother, whom I adored, in a profound way at the end of her life.

Eight years after my diagnosis, in the fall of 2015, I was more or less back to normal. This was the fall that my grandmother, Gram, came to live with my parents. We had no way of knowing that it would be the last year of her life.

I am also grateful for [Guillain-Barré] because it allowed me to be there for my grandmother, whom I adored, in a profound way at the end of her life.

Gram was a hoot. She was a good time wherever she went. She also had a hard time hearing bad news— bad news is decidedly not fun. As new developments emerged in the twisted web of her health, it was difficult to get her to listen. She resisted medications, doctors, and hospital stays.

Last spring, Gram was diagnosed with a Stage Four bed sore. It was infected and went all the way to the bone— a real bad news bears situation. She needed an operation, which she got. Then she needed rehab, which she reviled. It was not fun.

When Gram resisted, which she always did, my mother would often tag me in. I was given the task of getting Gram to come to her senses. I was the sugar coating to cover a bitter pill. I could do what no one else could. I could say that I’d been there.

She wanted to go home. Wasn’t it ridiculous that they wanted her to stay here?

I explained to her that during my hospitalizations, I had pushed too hard. I made it my sole mission to get home. When I arrived home, I realized that I should have stayed. As annoying as the hospital is, sometimes it is hard to lie in bed at home.

Gram relented. She even listened. She didn’t particularly care for my message, but she deferred to my authority. 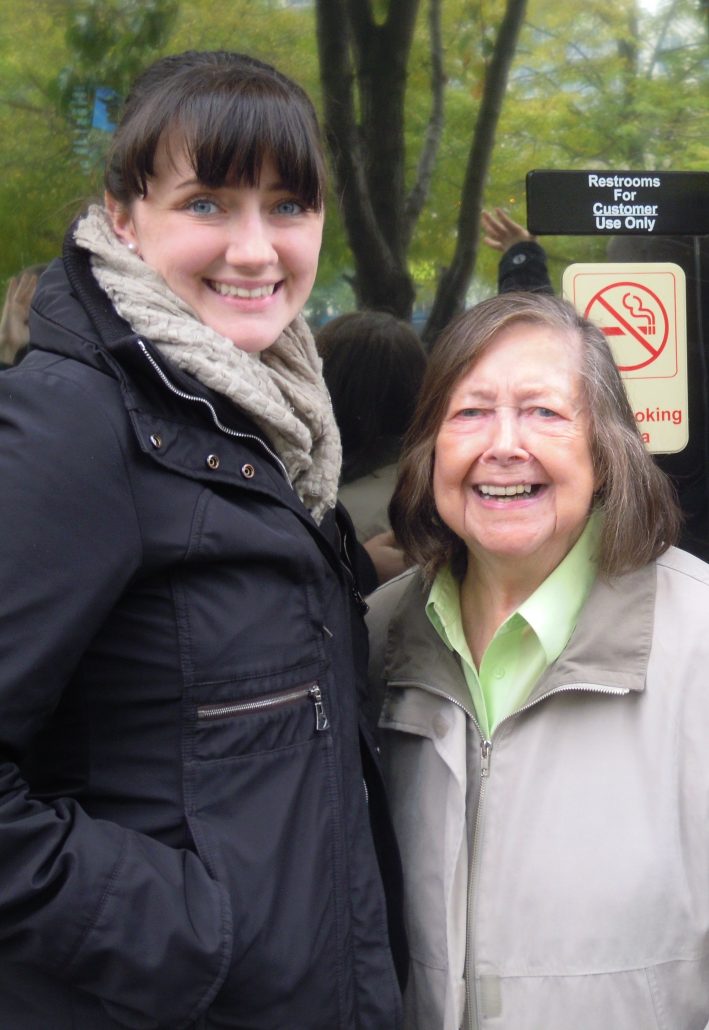 The author, Mary Kate Miller, and her grandmother.

I was the sugar coating to cover a bitter pill. I could do what no one else could. I could say that I’d been there.

She talked smack about medications. All of the doctors were “idiots” (her word). It helped that I’d been around the block with many of the medications and could hold my own against her complaints. Gabapentin? Yup. That makes you drowsy. Zofran (an anti-nausea medication) not working? That doesn’t mean it’s a bad medication; it’s a sign of how extreme your nausea is. Weed brownies? Worth trying. When you’re dealing with pain that no dose of narcotics can break, everything is worth a try.

In my illness, I wanted desperately to have someone who understood, who really knew what it was like. So did Gram. I was constantly lonely and frustrating. So was Gram. In this case, I could ease some of that pain, but not her physical pain.

Instead of recovering from the bed sore, Gram got worse. She grew weaker, and it became difficult for her to go to the bathroom on her own. She resisted help. She didn’t want the nurses to come with her. She wouldn’t entertain the idea of a bed pan.

I looked at her and said, “I get it. It’s embarrassing, and it sucks. I’ve done it both ways. I’ve accepted help, and I’ve insisted on going to the bathroom by myself… and then when I got back in bed, I felt terrible. Why feel terrible?” She looked at me, skeptical, but she didn’t argue.

My grandmother and I had a very special relationship. We were soul mates, kindred spirits. I cheered her up. That’s what everyone said. On the day that we made the decision to move her to hospice, she looked like a corpse when I entered the room, before she noticed I was there. It is shocking to see someone you love as they straddle the line between the world of the living and whatever that other side is. Once she saw me, she perked right up. My aunts and uncle said it was the liveliest they’d seen her all day.

I was happy that I could be that person for Gram, but it was also deeply confusing to me. I was told that she was dying, and then I show up to find a woman who wants to chat about everything and anything. It made it harder as we approached the end.

I was told that she was dying, and then I show up to find a woman who wants to chat about everything and anything. It made it harder as we approached the end.

On her first day of hospice, she experienced what turned out to be her last burst of energy. She was chatting with my Aunt Sue, giggling. I was angry. All I could think was, you came home too soon. Noticing my reticence, she turned to me with a rare angry look.

“And you,” she said. “I’d like to buy something nice for you and your home.”

“I need a cutting board,” I answered.

So began an epic search for an olive wood cutting board. It came in the mail the week after she died.

When you have a long-term illness, it can affect your relationship with death. Sometimes, it’s better to die than to experience excruciating, ongoing pain. In hospice, if you touched Gram, tried to move an arm or a leg, she screamed out in agony. I sat by her bed every day. I took the morphine nightshift, administering her medication every hour on the hour from 10pm to 4am.

I was the first person to let go. I took one night off from hospice care. I had an improv show in the city, and Gram would have wanted me to go. Before I left, I decided to say goodbye. I told her that I’d borrowed one of her signature button-downs and matching sneakers, so that I could bring her on stage with me. If she’d been awake, she would have gotten a kick out of it. I brushed her hair, told her that I loved her. “If this is the last time I see you, I want you to know that I love you very much,” I finished.

“We’re all going downstairs. Do whatever you need to do. I’ll see you if I see you.”

After that, I made a point to say goodbye every time I left her side. She was a stubborn broad, and I knew it would be hard for her to let go. I said it after I finished my medication shift, when I did a coffee run, and lastly, when the hospice nurse came for a visit and asked to talk to the family downstairs.

As we all stood, I said to Gram, “We’re all going downstairs. Do whatever you need to do. I’ll see you if I see you.”

The hospice nurse told us that her body had started to shut down. She would die in the next 72 hours. She passed within minutes.

My Aunt Jackie held her as she died. Even though I wasn’t in the room, I like to think that I was with her too, reminding her that it was okay to die.  I was happy that I was able to be there for her in a way that others could not. Because she was right. I did know what it felt like.

At nineteen, I began a life-threatening journey filled with pain. I hated every second of it, even the memories once I was better. Until it became the thing that allowed me to walk hand in hand with Gram until we said goodbye. 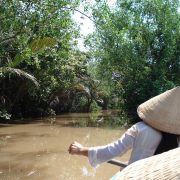 What I Wish People Understood About Having Celiac Disease
Don’t miss one more amazing story.
Every week, we’ll send a few of our favorite stories to inspire you.
Send this to a friend
Scroll to top