How “The Autistic Academic” Got Her Sci-Fi Writing Groove Back

In both the real world and through the pages of her fiction, Dani Alexis Ryskamp is looking to overthrow people's preconceptions of what it means to be autistic.
autism

When Dani Alexis Ryskamp was nine years old, she read through all of her dad’s old undergraduate psychology textbooks in an effort to figure out what was “wrong” with her. “I knew I was different from other kids the moment I set foot in kindergarten,” Dani told Folks, “and my mother, my teachers, and my peers all made it very clear that ‘different’ was wrong.” 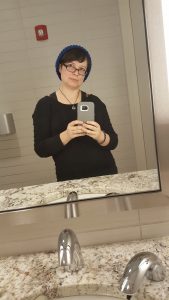 Throughout childhood, Dani had no friends and was viciously bullied at school. She spent most of her time alone, reading fantasy novels, like Madeleine L’Engle’s A Wrinkle in Time quintet and Vonda McIntyre’s Dreamsnake; taking dance lessons; and running around on her mother’s forty-acre farm in rural Barry County, Michigan. Her mother’s advice for dealing with bullies—to be excessively ‘nice’ to them, in hopes that they’d respond in kind—was almost as misguided as her teacher’s: “‘Well, the other kids wouldn’t do this stuff if you’d try to be more like them,’” Dani remembers being told. “But it didn’t seem to matter how hard I tried. There was something they understood that I didn’t.”

All of this left her feeling “crazy, broken, worthless, fucked up.” Panic attacks and dissociative episodes afflicted her regularly. The world felt like a sensory onslaught. Motor function wasn’t always predictable, and she felt helpless in any social situation that didn’t let her rely on a script.  At age seven, she made her first suicide plan.

Dani’s precocious textbook-reading did more harm than good. The 1970s-era, 101-level psychology textbooks “convinced me that what I had was schizophrenia and that the only treatment was to be locked up and loaded down with tranquilizers,” she says. “It became my life’s mission to hide that I was ‘crazy.’”

It didn’t seem to matter how hard I tried. There was something they understood that I didn’t.

In an escapist fifth-grade fantasy, Dani designed her dream house: A four-room log cabin, far away from the world of bullies, where she would spend her days writing science fiction, communicating with her editors and publishers via phone and fax. “I’ve wanted to be a writer ever since I knew where books came from,” Dani says.

But working from home wasn’t yet mainstream in the early 1990s, and so every adult in Dani’s life—except for her dad—dismissed her solitary-writer-in-a-cabin life plan as ridiculous. “By the time I’d left for college, the idea of being a working writer had been pretty well beaten out of me,” Dani says. As a college freshman, she discovered she hated her chosen major—mortuary science—and went on to get a B.A. in English before going to law school (“The same naysayers who talked me out of being a professional writer convinced me there were no jobs to be had with a Ph.D. in English, either”). All the while, she suffered from the same inexplicable sense of being “crazy, broken, worthless, fucked up.” Working in insurance defense left her physically and mentally ill; she burned out after a year.

It wasn’t until 2009, when Dani was 26, that she finally got the answers she’d been seeking as a kid reading her dad’s psychology textbooks. After burning out at the law firm, she visited a psychiatrist. In just a few hours, she was diagnosed with autism.

“In hindsight, I already knew that I was autistic: I’d been dating an autistic man for about six years, and I’d done enough reading that I could see myself in the literature,” Dani says. “The diagnosis came as a massive relief to me. Autism is called ‘pervasive’ for a reason: it affects every thought, every perception, every process. It says a lot about how sick I was at the time, physically and mentally, that I needed a psychiatrist to say the word before I realized that I’d kind of already figured that one out.”

All through her childhood, Dani had assumed she’d grow out of being different: “That I’d wake up one morning and I’d just understand what was going on socially, lights and noises and textures wouldn’t hurt, and my body would do what I wanted it to do whenever I wanted it,” she says. “It wasn’t until my diagnosis that I realized that I wasn’t going to ‘grow out of’ it, and it wasn’t my fault that I couldn’t.”

Not everyone was as relieved by the diagnosis as Dani was, though. “My mother’s response to the news was to say, ‘Do you think I did this to you?’” Dani remembers. “I confess that I laughed at her – by then, my dad and I had already decided I got it from him. (He has not gotten a diagnosis because he doesn’t see the point.)”

It wasn’t until my diagnosis that I realized that I wasn’t going to ‘grow out of’ [autism], and it wasn’t my fault that I couldn’t.

Later, Dani made the painful discovery that she’d been evaluated by a psychiatrist as a two-year-old, because her dad and babysitter had seen early signs of atypical processing—but her mother had buried that information during a rocky divorce from her father. “My mother still hasn’t accepted my diagnosis,” Dani says, “and that drove a wedge between us I doubt she’ll ever be able to mend. Because that diagnosis saved my life, and to hear her continue to treat it and me as a tragedy is heartbreaking.” 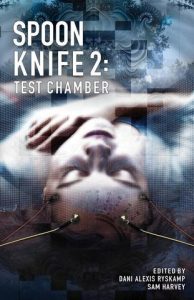 The diagnosis saved Dani’s life, in part, by paving the way for her transition from a soul-deadening insurance job to pursuing her childhood dream of being a writer. “The most valuable part of being autistic, for me, is that it’s given me an understanding and command of language that I’ve never seen in anyone who wasn’t neurodivergent in some way,” Dani says. “I wouldn’t be as good at what I do, or enjoy it as much, without that ability.”

She immediately enrolled in an M.A. in English at the University of Michigan. There, she met Athena Michaels-Dillon, the Production Coordinator of Autonomous Press, an independent publisher with the tagline “Weird Books for Weird People”: In other words, books about neurodivergence, queerness, and the various ways they can intersect. Titles include The ABCs of Autism Acceptance and The Real Experts: Readings for Parents of Autistic Children.

To put things in perspective, when Dani was born, the Americans With Disabilities Act (ADA) and Individuals With Disabilities Education Act (IDEA) didn’t exist. “We’ve gotten only marginally closer to accepting the idea that disabled people have a right to exist in public, even if the laws meant to familiarize us with that idea have no real teeth,” Dani says. “The mere fact of a mental or emotional health diagnosis is enough to jeopardize many people’s jobs, their right to raise their own children, their access to education, and their right to live independently.”

We’ve gotten only marginally closer to accepting the idea that disabled people have a right to exist in public, even if the laws meant to familiarize us with that idea have no real teeth…

In Autonomous Press and its main imprint, NeuroQueer Books, Dani found a group of likeminded people—the publisher’s partnership is currently all autistic—as well as a job that allowed her to use her legal expertise, writing skills, and lived experience as an autistic woman in a world built for neurotypical brains. Now, Dani is the resident attorney at Autonomous Press; her job is about about one-third lawyering and two-thirds editing. She’s co-edited NeuroQueer’s Spoon Knife series, an annual anthology of writing by neurodivergent authors; has a chapter in the upcoming NeuroQueer Handbook; and is currently working with veteran autistic activist Kassiane Sibley to turn her long-running blog into a book.

Dani blogs herself, passionately and prolifically, under the moniker “The Autistic Academic,” about everything from “Emotional Labor, Gender, and the Erasure of Autistic Women” to “The Autistic Adult’s Guide to Getting Hired.” Her work fiercely champions disability rights and debunks insidious myths about autism. Misunderstandings abound, of course; in Dani’s experience, the most common is the notion “that autistic people are somehow tragically unreachable or tragically deprived of the joys of a ‘normal’ human life – that we’re locked in, that we can’t understand other people’s reasoning or emotions, that we have no real feelings about anything around us,” she says. “I have yet to meet a single autistic person who actually experiences any of those things.”

Another pervasive misunderstanding is that autistic people can be categorized as either “high-functioning” or “low-functioning”—reductive terms that Dani finds unhelpful and insensitive. “‘High-functioning,’ of course, is most often taken to mean ‘almost a normal person,’ while ‘low-functioning’ often appears as a synonym for ‘burden’ or ‘tragedy case,’” she says. “Yet every autistic person I know varies wildly in their ‘functioning’ in various areas, even from day to day.  Some of us, myself included, have been described as both high-and low-functioning, sometimes by the same doctor in the same document.”

Autism is a state of constant flux.

Dani, for example, has three college degrees, but she can’t live alone because the steps involved in making food are too difficult for her to follow unassisted. She and husband spend time working out my scripts for various events and tasks before she does them. “Autism is a state of constant flux,” she says. “Describing our personal support needs is far more useful that dismissing us as ‘high-functioning’ or ‘low-functioning.’” 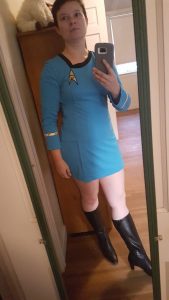 Later this year, Dani will publish her first science-fiction novel, Nantais. It’s set on a post-apocalyptic earth, all but destroyed by global warming and rapacious overconsumption. The rich have fled for Mars or the Kuiper Belt (on the other side of Neptune), while a few massive, corrupt corporations control the earth’s remaining resources. Disaster strikes on the Jemison, a research vessel working for a corporation called Interstellar Science: The captain’s son has been kidnapped, the computer core is slowly freezing up, and their only hope is an alien woman who has to have her memory wiped if she wants to live.

“I’m wildly excited about it,” Dani says of Nantais. “This is a universe that has existed in my head in some form since about 1992, so I’m thrilled to be able to put it into print.” And so, some two decades after designing her dream cabin, Dani has showed up the naysayers: She works as a solitary writer, communicating with editors, publishers, and other writers remotely, just as she planned as a fifth-grader. 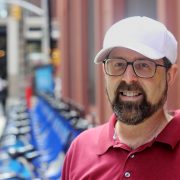 The Autism Advocate
Robert Lerose
Inseparable The Cyborg With Lou Gehrig’s
Don’t miss one more amazing story.
Every week, we’ll send a few of our favorite stories to inspire you.
Send this to a friend
Scroll to top