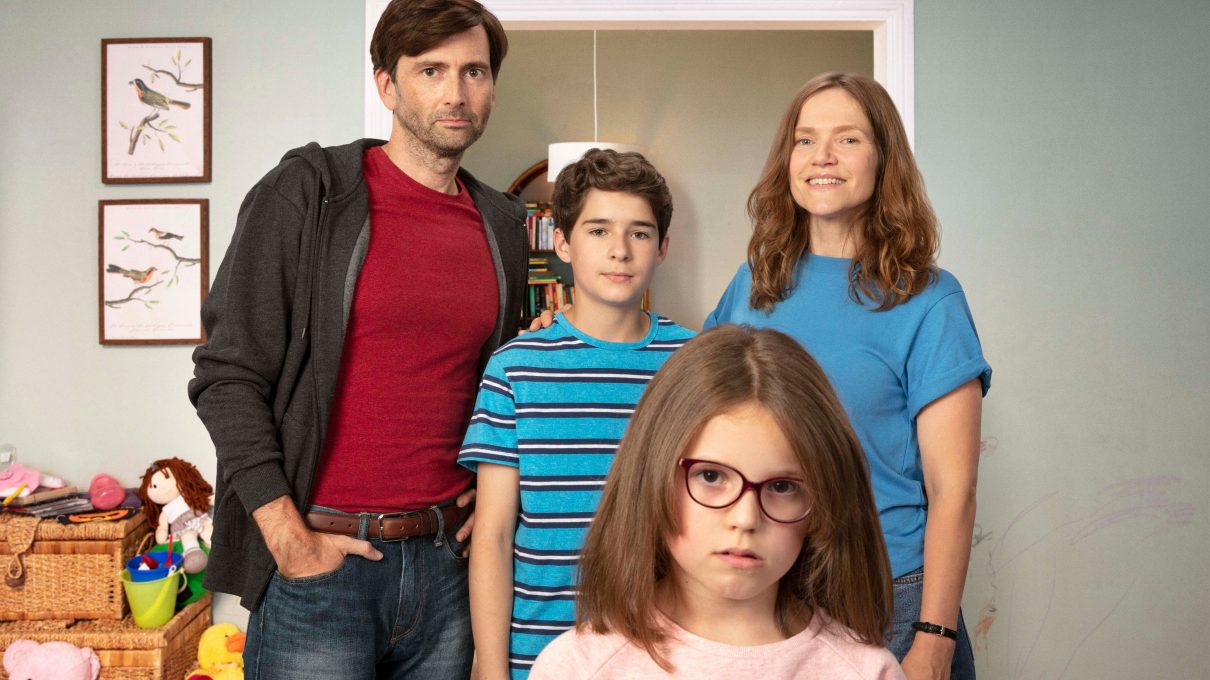 You might know Shaun Pye if you’ve ever seen Extras, where the English actor, writer, and comedian plays Greg Lindley-Jones, the smug actor foil to Ricky Gervais’s Andy Milman. Nowhere near as odious in real life, the affable Pye also co-created with David Cross The Increasingly Poor Decisions of Todd Margaret, a black comedy currently on Netflix and other streaming platforms.

Pye’s latest project is very different, though. His new BBC series There She Goes stars David Tennant, and  is based on his own real-life experiences raising his daughter Joey, who was born with a rare, undiagnosed chromosomal disorder.

“For years, I’d shared funny and poignant stories about my daughter, Joey with friends,” Pye says.  “Over time my friends would say they made them laugh and cry and think … and that these were stories that they didn’t really encounter in mainstream culture. “We realized we were in a unique position to tell a story that the vast majority would have no experience of.”

Now streaming in America on Britbox, Folks spoke with Pye about the series, how it differs from his real-life experiences raising a daughter with a learning disability, and how and why he chose to share his family’s story.

What was it like bringing There She Goes to the screen?

I’ve written many TV shows but this was obviously the most daunting at the outset. As it turned out, it was one of the easiest to make. As it is based so much in reality, writing wasn’t as much a creative process as a remembering process. Whereas in other projects there were so many criteria for whether a character or plot was right; with There She Goes the only criteria was “does this feel true?” It’s quite liberating really.

Writing [There She Goes] wasn’t as much a creative process as a remembering process.

Turning the script into the show was also a joy. There’s so much goodwill towards this from the production company (Merman and especially producer Clelia Mountford), the very supportive BBC and the cast and crew. It sounds like something everyone says but honestly, I couldn’t have worked with a better bunch of people.

What are the major ways the show differs from your real-life experience? Why did you make those changes?

We tried to make the show as honest as possible. So the central four characters are incredibly close to my family. Simon is the dad, Emily is the mom, Rosie is Joey, and Ben plays Rosie’s older brother. The further we radiated out from these characters the more artistic licence we took, so the grandparents and neighbor are more “based on” true characters.

The stories are all rooted in reality, although to fit them into 30 minute episodes we did play with chronology, put true stories together that didn’t necessarily happen in the same time frame.

Was it hard going public with the fact that you have a special needs kid? Why or why not?

It wasn’t a difficult decision to go public with Joey having special needs as we’ve never hidden it; it’s very hard to hide it! To us, she’s just Joey and her condition is as normal as having any other child.

What did worry me was how the show would be received by parents and families in a similar position. It’s very much our story and never pretends to tell a more universal story of what it’s like to have a child or sibling with other special needs. But we felt a great responsibility all the same. We didn’t need to worry; the response from these parents and siblings was overwhelmingly supportive and without doubt the aspect of the show I am proudest of.

What did worry me was how the show would be received by parents and families in a similar position.

What is it like to be the parent of someone who doesn’t have a diagnosis?

Joey is in the 100,000 Genomes project–a UK wide genetics program–so we may get a diagnosis.

Early on the lack of any knowledge about how Joey might develop caused a lot of stress for me. It’s hard to look forward when there’s no accepted map of what’s “normal” for her.

But now, while we’re obviously intrigued (and there could be hidden physical issues that a diagnosis could highlight), we don’t really feel a desperate need for a diagnosis. Whatever she has is almost certainly so rare that there’s probably not a great deal of case studies to shed any light. And even if there was, there’s obviously no treatment; so it wouldn’t change our day-to-day lives.

Do you have any advice for other parents who might have undiagnosable children or children with rare “orphan” diseases?

I never really wanted to give advice to any other parents–just to tell our story as honestly as possible and hope other people could take what they wanted from the show.

Now it’s aired in the UK and had the response it’s got I’ve changed my attitude slightly. So many people got in touch to say: “Your program made me realize I wasn’t alone, that it’s okay to find all this stressful; it’s ok not to be perfect.” It was very emotional for me to be told that.

So that’s the advice I’d pass on. However difficult it feels–you’re not alone.

However difficult it feels–you’re not alone.

What are some of the biggest challenges you face as a parent of a special needs kid? Are there any that you feel are “unique” to your career as an actor and comedian?

Wow. To be honest it becomes your ‘normal.’ We don’t see challenges–it’s just Joey. But I guess the constant vigilance, the constant worry that she’ll hurt herself, the endless cleaning of wee and poo from beds, floors, sofas. All this limits what you can do away from the relative safety of the house–so going out, going on holiday are harder things to organize than for other families I’d imagine.

Communication is another challenge. Trying to make her understand and vice versa is a long long process. Joey takes a hugely disproportionate amount of our time compared to our son. Making sure to make him feel special is a knock on effect of that.

In the series, when you’re out to dinner or even walking in the street, strangers and neighbors don’t know how to react or they respond negatively when they see Rosie “misbehave.”  How do you and your wife handle that in real life?

I would say the vast majority of people are very positive towards Joey. There are exceptions, but actually having Joey has restored some of my faith in human nature.

The biggest problem, which we feature heavily in the show, is that people just don’t know how to act round her, sometimes they’re just scared of saying the wrong thing.

I’ve come to the conclusion that it’s fine to be like that. And that anyone who does try to help or interact with her, by that very act, is doing a wonderful thing. So if they say or do the “wrong” thing, who cares? They’ve gone out of their way to treat Joey as a little child, not someone different.

What do you hope people take away from the show?

I hope people laugh at the funny bits and are moved by the sadder bits. I hope it opens a window to a world that people may not have seen before. I hope it promotes a little more understanding of learning disability.

I hope it opens a window to a world that people may not have seen before.

And I hope they see in the modern timeline that, for us, everything was okay. And that Joey/Rosie is both loving and very loved.

Has making this show been cathartic or helpful in any way for your family?

Yes. It’s made us confront some unpleasant moments from our past. Without the show I wonder if we would ever have done that.

And we had a laugh writing it! It’s not all darkness and gloom. It made us as a family remember all the mad, crazy, silly moments and preserve them in a TV show–like a moving photo album!

Renee Brincks
Do you know someone else who would enjoy this story?
I’m A Refugee Addicted To Painkillers In Canada

Why The ‘Saw’ Films Are Relatable To Anyone Who Is Chronically ...
Don’t miss one more amazing story.
Every week, we’ll send a few of our favorite stories to inspire you.
Send this to a friend
Scroll to top