How To Help Someone After Disability? Teach Them Tennis

Paralympian Kai Schraymer knows firsthand how becoming disabled can turn your world upside down. That's why he teaches newly disabled people the same sport that helped him.
bone cancer 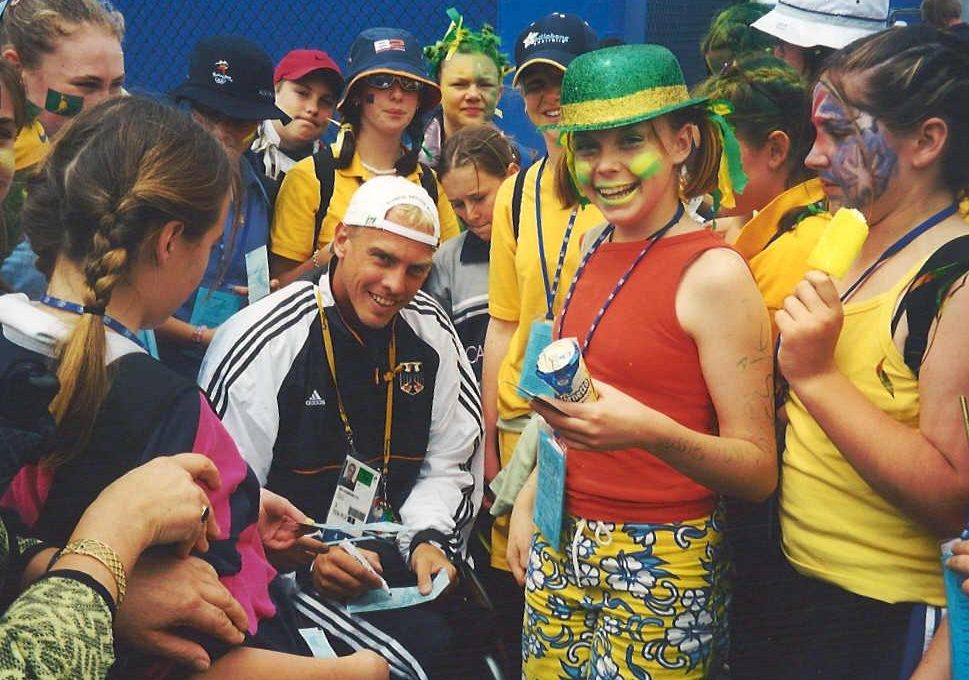 In May of 1984, in a local tennis club in Brussels, Belgium, 16-year-old Kai Schrameyer sat in his wheelchair holding a tennis racket, looking at his father across a net. He had trained many many days on that very court, he had become good at tennis; he had fallen in love with it. But this time, everything–or at least one thing– was different: he’d had his left leg amputated above the knee a year earlier after a bout of bone cancer, and now he couldn’t chase down any balls that flew more than 3 feet away from him. He felt sad and frustrated.

In 1990 Kai saw the world’s top wheelchair tennis players compete in the Swiss Open in Geneva. The players’ smooth movement and flawless technique moved him. The event changed his life. He decided to dedicate himself to the sport. He got a coach willing to train him for cheap, and went to work, five days a week. By 1992 he was ranked #6 worldwide. That year, he beat some of the same players he had watched in Geneva to win a silver medal at the Paralympic Games in Barcelona. In 1993-94, Kai was the #1 ranked wheelchair tennis player in the world for 12 consecutive months.

That first day back on the court, Kai had been comparing himself to the player he had been before the amputation. It’s a common reaction, he says, but “not fair or helpful.” Now, as the National Coach for Wheelchair Tennis for the Canadian Tennis Association, he’s helping people new to their wheelchairs in Canada and around the world avoid the same mental trap — both on and off the court. 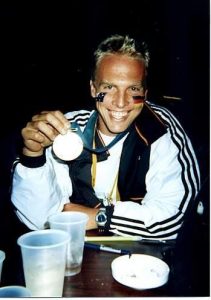 Kai Schraymer showing off his Silver Medal from the 1992 Paralympic Games in Barcelona.

The Tennis Association’s mandate is the development of tennis in general including of wheelchair tennis. In order to develop wheelchair tennis, Kai needs to recruit new athletes, so he works in a network of rehab centers all over Canada. The international tennis federation sends coaches and players to developing countries to help them set up tennis infrastructure, and Kai has been to Uruguay, Colombia, and Bolivia on such trips visiting rehab centers, helping local groups maintain recruiting pipelines from rehab facilities, and training able-bodied coaches for wheelchair tennis. We caught up with Kai to hear more about his work.

What exactly do you do when you go into a rehab center?

The rehab center is the first point of contact for somebody who has had a traumatic experience and finds themselves in a wheelchair. At that point, their whole life is upside down. That’s where we come in. The centers usually have a gym. We bring rackets and balls and set up mini nets. We have them hit the ball in a series of regular intervals a to see how it feels. Sessions are about 45 minutes to an hour. We introduce the idea: “you can be active.”

We are always looking to find future champions, someone who will win a medal for Canada.

We end up at the centers because maybe a physical therapist mentions that someone is asking about tennis, or because someone was already an athlete and might have potential. We’re introducing wheelchair tennis to be beneficial, recreational–not necessarily aiming for greatness or the paralympics. But also, we are always looking to find future champions, someone who will win a medal for Canada. 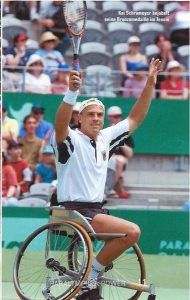 It’s an amazing feeling. You find someone who is new to their wheelchair and that’s usually after an illness or an injury, and that’s a pretty low moment. They’re in the process of reshuffling everything in their lives and coming to terms. But you can throw them a ball, and they hit it, and they’re having fun all of the sudden. That just literally makes my day every single time. That is why I do this work. It’s not a broad impact job. You’re not making a difference in millions of people’s lives. But you make a lasting and profound impact on people that you work with.

It’s different case by case. It’s also not usually a linear pathway. You could have somebody who has not done any sports before their accident, so usually they struggle more because they don’t have physical literacy but maybe they saw wheelchair tennis on youtube and they’re more than happy to give it a shot. On the other hand, we have a young guy in Vancouver right now who used to be a great tennis player. He’s super coordinated and learning really fast. But he was really struggling when he came in. He wouldn’t always show up so I’d call him and ask him if he wanted to go out and hit some balls, and he’d say yes, but cancel 30 minutes before. He hasn’t come to terms with his new reality.

I get it, that’s what I did for a while too: I compared myself to the person I was before I lost the leg in so many ways…

And I get it, that’s what I did for a while too, I compared myself to the person I was before I lost the leg in so many ways, including being able to run and do all kinds of athletic things. That’s something that was taken from me, and that still sucks, but it is what it is. You have two choices. You can dwell on “I wish I could run around on two legs,” but that’s not going to move you to a better place; it’s just going to keep you stuck. Your other choice is to come to terms with it, make the best of it, and focus on the things you can do. But I just have to be patient. It might take that kid another year, some more psychological support. At some point, he might come back ready.

I met another young kid only a month after his accident and three years later he’s enrolled in a scholarship program at University of Alabama for wheelchair tennis. I got to see him from that ground zero moment through to thriving. Wheelchair tennis opened the door for him, and now he’s getting an education because of his talent. It feels super satisfying to be part of that journey.

How do you try to coach people beyond tennis to help them along in that journey?

If people ask me for it, I will give advice, but I try not to intrude and give it unsolicited. I just try to be patient and encourage them as players. If that helps, then great, but there are often unresolved identity issues that are above my pay grade.

I got my motivation when I started by seeing some of the best players in the world compete and I said, “are you kidding me? I want to be able to move as well as they do!” So I hope having success stories of other athletes in front of them helps them too.

Mostly it’s through the sport itself. Before wheelchair tennis, I started with basketball. That changed my world completely, changed my confidence level because I was able to do something competitively, to play for points, games, championships. It also helped me form a new community of like minded people. That’s also a super important component because as I see often in my work, people tend to withdraw after their accidents or illnesses; they isolate themselves. It helps them to create a support system in other areas of their lives. That’s true for sports regardless of disabilities.

There is also the physical aspect: practicing the sport helps build strength and explosiveness that transfers to everyday skills. 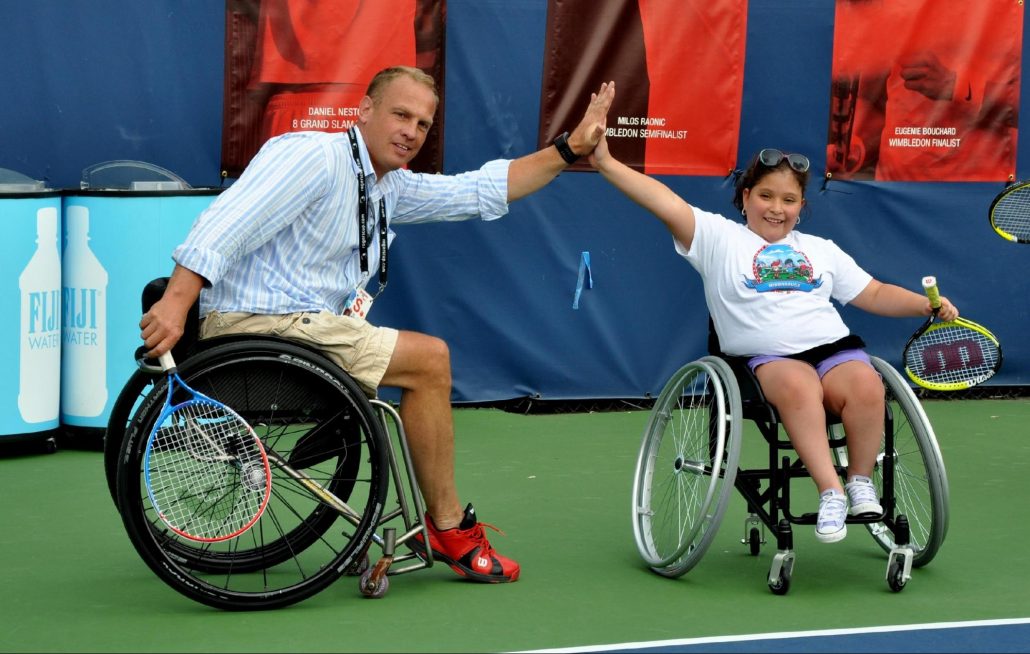 Kai training one of his students.

When you are teaching able-bodied coaches, what do you teach them about working with people in wheelchairs?

We really want people to understand that wheelchair tennis is not just for people that are in a wheelchair in their everyday lives. Wheelchair tennis is a sport and the chair is a piece of sports equipment. Internationally top players are people with a minimal disability like a blown out knee and they’re eligible. Amputees like me, because of the good prosthetics, they can run around a court with a prosthesis but they can also play wheelchair tennis. Even able bodied people, like some coaches love playing in a wheelchair.

Wheelchair tennis is a sport and the chair is a piece of sports equipment.

I don’t teach coaches how to relate to people in wheelchairs. They are coaches and actually, my main message to them is: this is still tennis. The only difference is that going from a to b is not through running or shuffling but through pushing the wheelchair. So a large chunk of the course is teaching them about efficient movement in the chair. Rather than teaching them about people in wheelchairs, I tell them tell them to let people indicate to them what their limitations are, to wait for the, “hey coach, I don’t have full core muscles, so that move is hard for me.” But basically, they should not be treating the athletes differently. 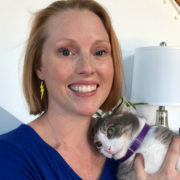 How Big Tech Gets Disability Wrong
Brent Crane
The Disabled Filmmaker Turned App Maker Trying To Map The Accessibility Of Every...

6 Songs About Chronic Illness From Pop Stars With Health Conditions
Don’t miss one more amazing story.
Every week, we’ll send a few of our favorite stories to inspire you.
Send this to a friend
Scroll to top