How To Spot A Fake Service Dog

Service dogs helps hundreds of thousands of people live their daily lives, but counterfeits muddy the waters and create chaos. That's why Lon Hodge and his dog Gander are trying to educate people.
best ofptsd

Sitting in a local restaurant, the man with the Great Dane laughs as his dog romps from table-to-table in hopes of getting dinner scraps. His fellow diners are not so amused. No one stops the dog because he’s wearing a service vest.

“That Great Dane is a fake,” says Lon Hodge, a Vietnam veteran with a real service dog named Gander. Lon often reads Tweets, news articles, and Facebook updates about people being denied entrance into commercial establishments because they have a service dog with them. He knows this firsthand: he and Gander are frequently turned  away from restaurants, hotels, and stores.

Lon suffers from Post Traumatic Stress Disorder (PTSD) and relies on Gander, a Labradoodle, to keep him calm. When Gander hears Lon’s voice start to rise, he licks his hand. “If I don’t respond,” he says, “he gets up and puts his front paws on my chest and looks me in the face. It’s almost as if he’s asking ‘if I’m okay?’”

A Mission Of Understanding 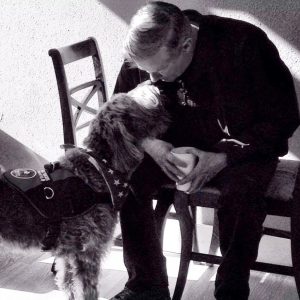 He and Gander are on a mission. They travel the country teaching business leaders and their employees how to spot a real service dog from a fake. Through his nonprofit, Operation Fetch, they educate veterans and businesses about people with visible and invisible disabilities, like PTSD.

In the past two years, they partnered with Amazing Pet Expos to talk to people in the pet industry about service dogs. Everything from how to get a service dog to training them to caring for them and, of course, detecting fakes are covered.  (Plans are in the works for another expo to be held next May. Details will be posted on their Facebook page.)

Lon works with businesses to educate them and the public about just what a problem fake service dogs are. He’s given talks at the corporate offices of Starbucks, McDonald’s, Walmart, and Vantage Hotels. “These corporations want you to shop in their stores,” he says. But when businesses turn people with real service dogs away because of negative experiences with counterfeits, they often hurt their own business, and the lives of their customers.

What Makes A Service Dog ‘Real’?

“Service dogs help people live their lives more independently,” says Brianne Corbett, vice president of client services and dog operations at Freedom Service Dogs of America. “The handler and service dog are in tune with each other. And while most of us have a special bond with our pets, service dogs are more than pets.”

The Americans with Disabilities Act (ADA) defines service animals as dogs individually trained to do work or perform tasks for a person with a disability. Service dogs provide a range of duties–from turning lights on and off, retrieving keys, keeping veterans with PTSD free from stress, and a host of other tasks. The ADA doesn’t call them pets.

“With PTSD, it’s hard to lift your head above your anxiety,” says Lon. “Gander keeps me calm. Like a person in a wheelchair, that person needs his chair to move about. I need Gander for the same reasons. He’s not my pet; he’s my service dog.”

“Like a person in a wheelchair, that person needs his chair to move about. I need Gander for the same reasons. He’s not my pet; he’s my service dog.”

While most pet owners have a tight bond with their pets, it’s different with service dogs. Carol Bryant, a dog blogger and publicist, travels everywhere with her dog Dexter. He doesn’t wear a service vest and she won’t go into places that don’t allow dogs. Plain and simple, she respects the rules and would never take Dexter where he isn’t welcome. That means dining in hotel rooms when she’s on the road in order to spend more time with her dog. If she goes to a meeting and can’t bring her dog, her partner willingly steps in to watch him. 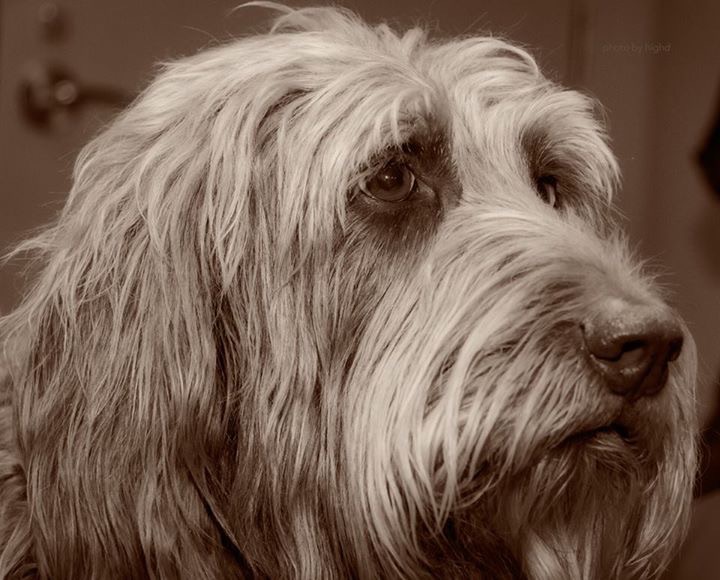 Dogs With A Job To Do

People with service dogs don’t have that option. They need to be with their service dog all the time, and that’s the true sign of a real service dog. “It’s not a real service dog if you check into a hotel and leave the dog in the hotel room when you have dinner or go out somewhere,” Lon says.

When Lon brings Gander into a restaurant, most people have no idea he’s present. “He’s quiet and usually lies under the table,” he says. “He’s never approached anyone. That’s a sign of a service dog. Still, I can understand why some people don’t know the difference. It’s confusing.”

Shutting Down The Counterfeits

So, how can this be resolved? According to Lon, there’s a movement circulating to shut down phony registries. Anyone with an active credit card can go online and purchase bogus vests and ID cards stating you have a real service dog. Lon’s not in favor of shutting down these operations because, “where there’s an illegal will,” he says, “there’s a way; people will circumvent the law in an absence of true standards.”

Instead, Lon wants to see a national conference on standards, training, and registry that brings together hotels, restaurants, law enforcement, the ADA, dog trainers, service dog agencies, and people like him with a vested interest in a peaceful coexistence and accommodation.

“Our goal is to try and fix this with the least possible stress for everyone,” he says. “People just aren’t informed. When they listen to me and when they meet Gander, they get it.”

The number of service dogs is not accurately known, since there’s no real registry. Congress did a study in 1990 and found there were 43 million Americans with disabilities and approximately 387,000 service dogs across the U.S. 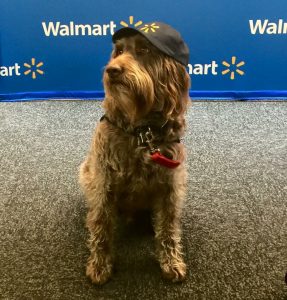 Lon and Gander speak to companies to educate them about why service dogs are important, and how to spot the fakes.

Roughly 20 veterans commit suicide each day nationally according to a report from the Department of Veterans Affairs. “Life profoundly changes for the better when veterans with PTSD and brain trauma injuries are paired with a service dog,” says Corbett.

Changing The System, One Dog At A Time

Gander continues to improve Lon’s life. He’s a rescue from a Colorado kill animal shelter who took part in a prison dog training program and received additional training from Freedom Service Dogs in Englewood, CO. He’s been with Lon since 2012. Home is in Chicago; yet, they spend more than 50 percent of their time on the road addressing corporations, businesses, Rotary Clubs, veterinary colleges, universities, and bar associations about service dogs.

After listening to Lon and meeting Gander, Starbucks, McDonald’s, Walmart, and Vantage Hotels now welcome service dogs. Unfortunately, not all companies are receptive. After three separate incidences with American Airlines, Lon is now in a court battle with them. “Google American Airlines and veterans with service dogs and a few lawsuits pop up,” he says. “We call ahead and are told everything will be fine,” he says. “And then at check-in, they give us a hard time, asking for certification that doesn’t exist and threatening that Gander can’t fly with me. It triggers my anxiety. Even the Service Dog of the Year was banned from an American Airlines flight. ”

Lon wants people to think of him and Gander as a team. “People need to understand that Gander’s an extension of me,” he says. “I owe him an incredible debt of gratitude.”

“My wife, who’s a Chinese historian, says Gander was a ‘bodhisattva,’ which in Buddhist lore is a character that has reached enlightenment, but has decided to stay on earth to teach compassion and love. My wife says if I get reincarnated, I’ll come back as Gander’s servant because he does so much more for me than I think I can ever do for him.” 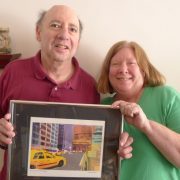 The Weight: Caregiver Fatigue And Diabetes
Don’t miss one more amazing story.
Every week, we’ll send a few of our favorite stories to inspire you.
Send this to a friend
Scroll to top