In The Shadow Of Hiroshima, I Learned To Love My Chronically Ill Body

When I was face-to-face with the Atomic Bomb Dome, I expected to feel a connection to history. I didn’t expect to see a reflection.
bowel diseasehyperpigmentationmelasma 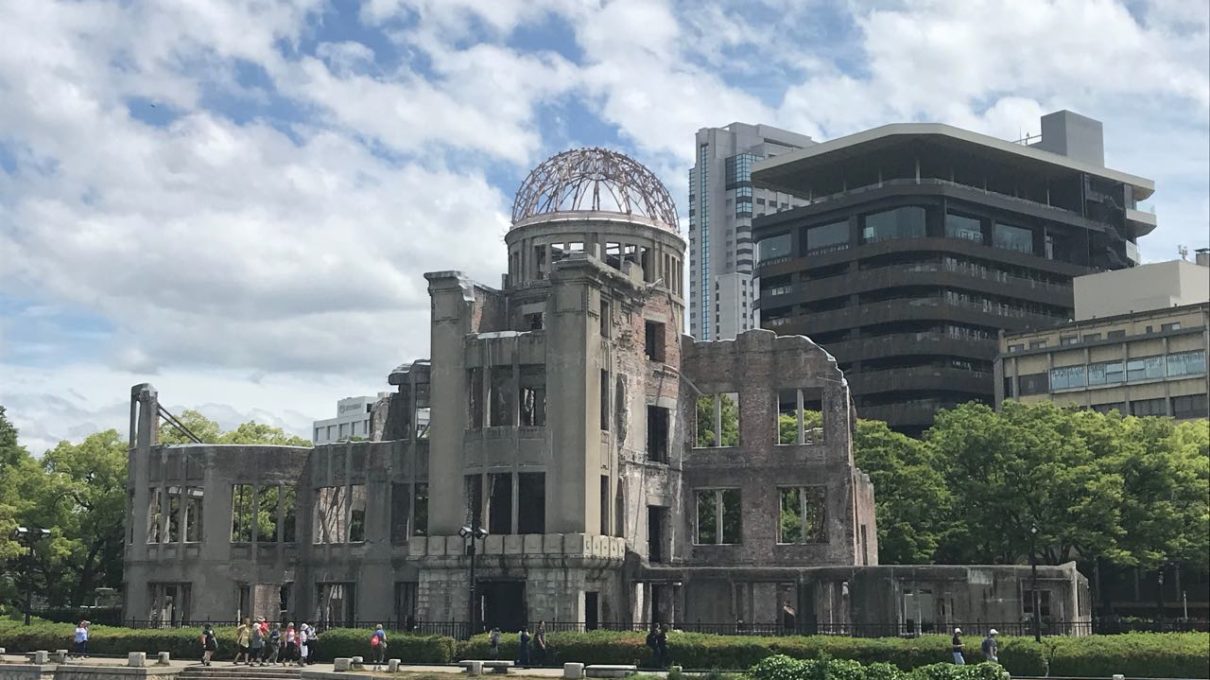 At 8:16AM on August 6, 1945, the first atomic weapon used in warfare detonated 580 meters above the Japanese coastal city of Hiroshima. 160 meters northwest of the hypocenter sat the Western-style Hiroshima Prefectural Industrial Promotion Hall. As 16 kilotons of TNT lay waste to the city and its approximately 300,000 inhabitants, the building was gutted from the inside out. 5400°F heat blew downward and outward at 7200 miles per hour, instantly melting the distinctive copper dome and shattering the numerous tall rectangular windows. Nearly three-quarters of the hall toppled in slabs of sand and clay, cement and metal. But not all. It was the only structure left standing, however damaged, so close to the explosion.

Seventy-five years later, the Hiroshima Peace Memorial—colloquially known as the Atomic Bomb Dome (原爆ドーム)—is the heart of Peace Memorial Park. Preserved in all its resilient ruin, the remains of the building serve as a visceral reminder of the annihilating force of atomic weapons, a monument to the dead, and a symbol of peace.

When I visited the Atomic Bomb Dome last May, I felt a connection to it that went beyond fascination or reverence for the historic event and its victims. The dome was broken. My body was broken. We had that in common. People visit Hiroshima to learn about history. I didn’t know it at the time, but I had come to learn how to make peace with myself.

In person, the Atomic Bomb Dome was both more fractured and more complete than photos suggest. Empty window frames and missing stories exposed the dome’s interior walls of brick, stripped of their decorative plaster. Chunks of rubble clusters around and inside the dome’s surviving façade, like teeth spit on the floor after a punch to the mouth. Why hadn’t anyone tidied up? I wondered, before remembering that the whole point of preserving the dome meant leaving it exactly as it was after the blast. Ruins are messy, as I knew all too well. Within my own interior, I carried the scarred tissue of my childhood guts.

I was diagnosed with inflammatory bowel disease at eleven, a year after my parents’ divorce. For most of the next decade, I was acutely sick. Trips to the bathroom numbered five, sometimes ten a day. Steroids swelled my face as immunosuppressants drained my energy. I chewed through blister packs of Imodium on a 30-minute drive. When I was being prepped for a colonoscopy midway through a three-week hospital stay, the water that poured out of me was bright red with blood. I burst into tears, my stick-thin legs dangling in the air as I perched on the toilet seat, briefly terrified I was bleeding to death. I was twelve.

I coped with stories. Stories helped me forget the body I hated and its broken plumbing. I felt least alone when alone, reading about other people whose bodies had betrayed them. Survivors of traumas far greater than mine, like those of Hiroshima, were my patron saints. I loved them because they knew what it was to be broken. I loved them because I couldn’t love myself.

In The Shadow Of The Dome

Nearly 30 years after my diagnosis and 15 after my last relapse, I felt that love as I sat in the shadow of the Atomic Bomb Dome and thought about the people vaporized and damaged by the explosion. Love and luck: had my disease not been in remission, I wouldn’t have been able to stray far past my house, much less across continents. My gratitude for my body had its limitations, though. My insides had healed, but not my anger. That, I redirected outward. Throughout my 20s and 30s, I rationed calories with an unforgiving militancy. I stayed lean, but struggled with adult acne and melasma, a hormonal facial hyperpigmentation. In Japan, a part of the world that particularly prizes clear and pale skin, I had grown more self-conscious than ever about my mottled olive complexion.

My own face made me grimace, but I gazed at the Atomic Bomb Dome’s similarly discolored façade in wonder. The cracked concrete was shadowed at odd intervals like an abstract pencil sketch. Lighter patches where pieces have chipped off scarred the concrete, like oversized and misshapen pores. Later that day, at the Peace Museum, I saw photographs of how the light and heat of the explosion did unprecedented things to the survivors of Hiroshima. Blood refused to clot, pooling to the surface like grisly polka dots, marking a soldier’s face, a child’s arm. Thermal burns boiled skin and muscle until they resembled ground meat. I found poignancy and even loveliness in the dome’s absence of walls and windows, crumbled columns and jagged edges, but I felt only sadness as I studied the victims’ disfigurement—and shame at my own obsession with comparatively minor facial freckles.

I have always wanted to be seen as beautiful, seeking a validation of my body from others that I couldn’t provide myself. The Atomic Bomb Dome’s brokenness may have taken its beauty, but it increased its value. The dome shook and shattered after being exposed to heat, wind, and light stronger than it was ever designed to withstand, but it stood. It was precisely because it was so close to the hypocenter that its foundations held. It had never occurred to me before that the closer you are to annihilation, the more likely you might be to make it through.

In visiting the Atomic Bomb Dome, I met a body in all its brokenness and loved it anyway.

The Atomic Bomb Dome is not just an artifact of destruction or a symbol of peace. It’s a testament to the people of Hiroshima, who transformed the worst moment in their history into their reason for being. The 1949 law passed to fund the city’s reincarnation designated Hiroshima “a peace memorial city to symbolize the human ideal of the sincere pursuit of genuine and lasting peace.” In visiting the Atomic Bomb Dome, I met a body in all its brokenness and loved it anyway. The encounter made me realize that, if I could do the same for my own fleshly shell, I might just make peace with it—and even appreciate how it has withstood so much strain yet stayed intact.

Meghan Beaudry
Do you know someone else who would enjoy this story?
ADHD Looks Different In Women. If I’d Known That, I Wouldn’t Have Been Divorced...

A Mermaid Saved My Brain
Don’t miss one more amazing story.
Every week, we’ll send a few of our favorite stories to inspire you.
Send this to a friend
Scroll to top