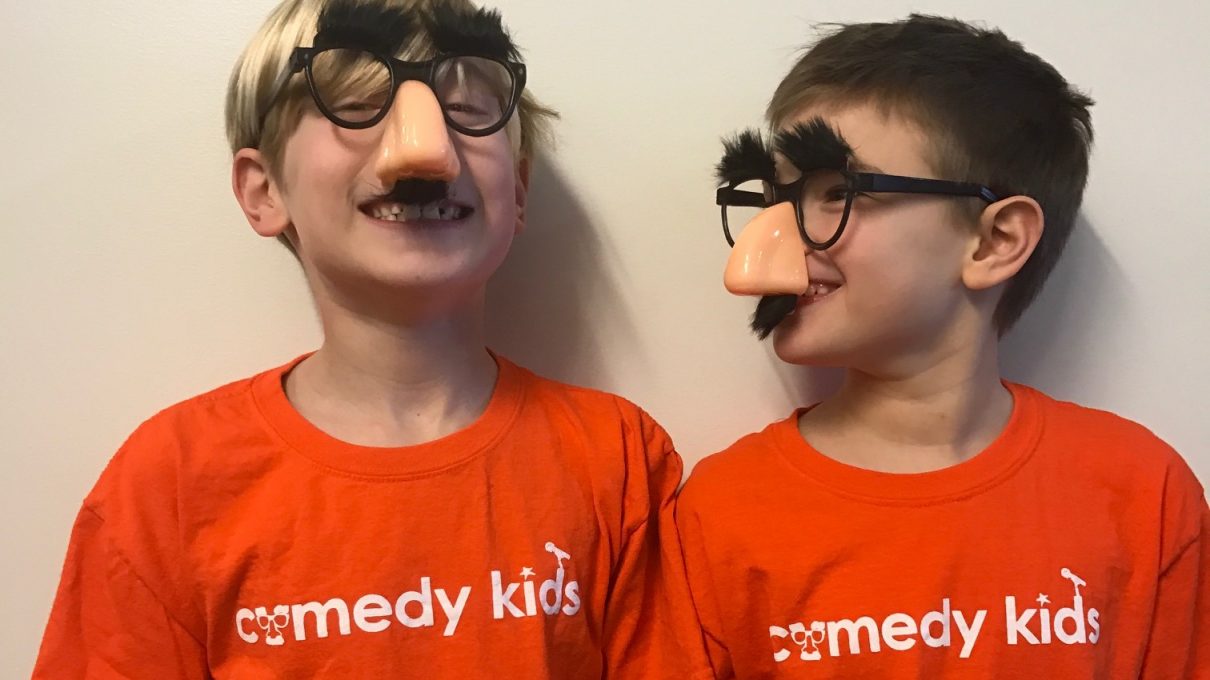 It was another rainy day in Chappaqua, NY, and Max Chawtko and Alex Travin were bored. Stuck in their classroom for indoor recess, the two eight-year-old besties were desperate for something to do. Then inspiration struck. Max’s five-year-old sister had recently been diagnosed with brain cancer and they had a brilliant idea: tell jokes as a way to raise money to support pediatric brain cancer research.

Of course, since they’re eight-year olds, Max and Alex have a more roundabout way of telling the story. 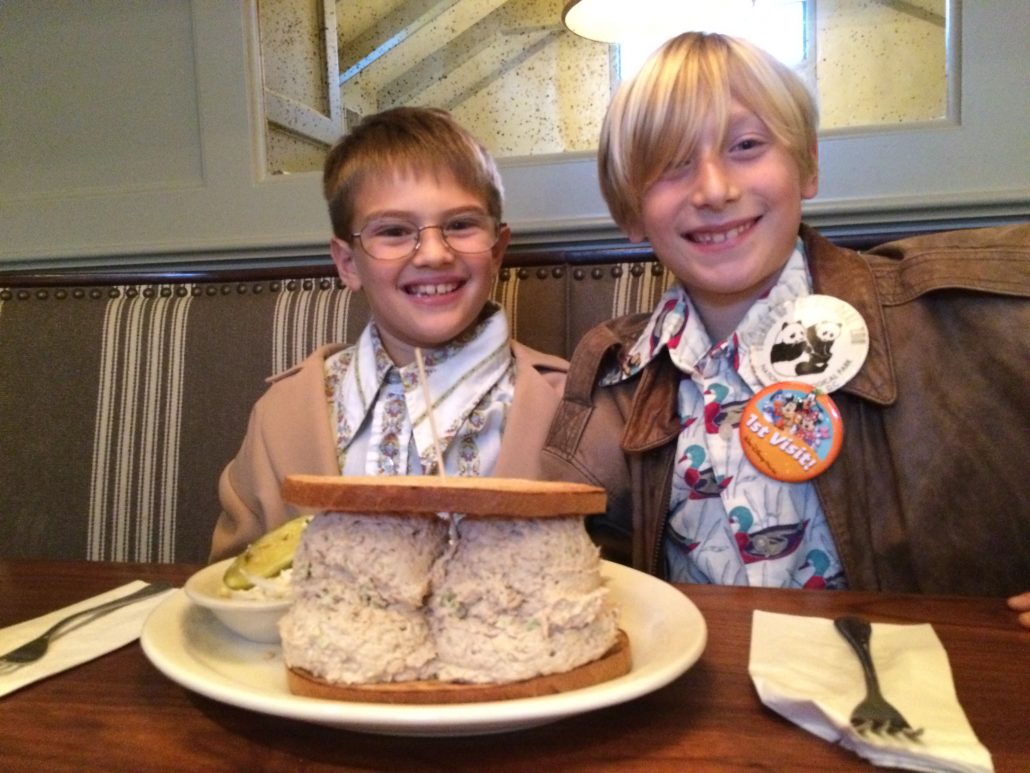 Alex: I came over to Max and asked if he wanted to tell jokes with me and people will pay.

Max: No, that’s not what happened. Me and Alex were playing and decided to do something with jokes together. So we decided to make up something called Jokes for Scarlett. We wanted people to bring in five cents and then we would tell them a joke.

Alex: On the first day we offered free jokes. We didn’t tell that many jokes, and they weren’t that good. We were just getting started.


Max: We made a sign in the back of the classroom and wrote “Jokes for Scarlett on it.

Alex: A few people came back to listen.

Max: The next day, was indoor recess again and one kid brought in $20.


Max: No, don’t you know how to count your money? It was $20. And five other kids brought in money.


Alex: No, it was three other kids.

Max: No five. I know, how about we round it out and we say four kids?

Alex: We didn’t know people would come back with money. We gave Ethan a lot of jokes because he brought in more than five cents.

Max: No, he brought in a bunch of dollars. You should say more than five dollars. But he didn’t empty his piggy bank. He says he has lots of money.

Alex: At least that’s what he says…

Q: What do you call a mean cow?

The boys, known by their friends and family for their impeccable comedic timing and entertaining banter, realized they were on to something. As word spread and kids began to empty their piggy banks in order to hear a joke and support the cause, they boys began to dream big. They wanted to reach a larger audience than the kids at Roaring Brook Elementary School in Chappaqua, NY.

So, unbeknownst to their parents, they began telling their classmates that they would set up a table at their local farmer’s market. No stranger to fundraising–with the help of their parents, the boys had previously helped create a 40-person team that raised $30,000 for Swim Across America that previous summer–they quickly spread the word. 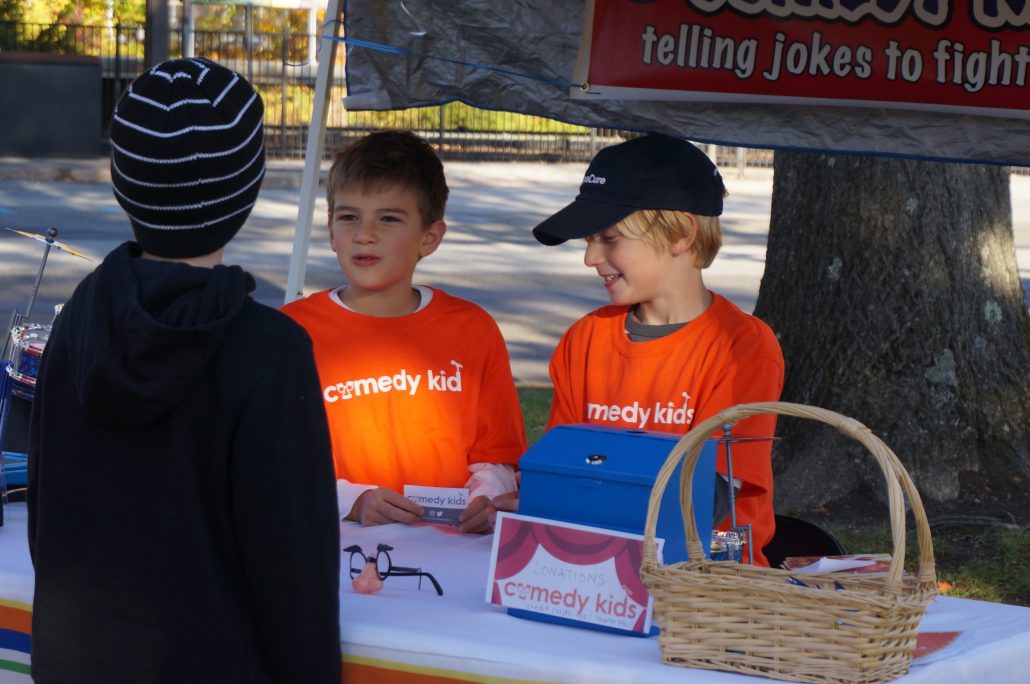 “Suddenly, people were contacting me and stopping me on the street to ask how they could donate money and when the boys were going to be at the Farmer’s Market,” Robin Chawtko, Max’s mother, recalls. “I had no idea what they were talking about.”

Alex: We went to Starbucks for our first business meeting. Our moms helped us with names. One idea was the Westchester Jesters, and another one was Two Stooges.

Max: But we liked Comedy Kids. At our meetings, we talk about our business.

The boys’ moms got to work and began taking the necessary steps to reserve a spot at their local farmer’s market, a popular place where their small town gathers on Saturday mornings to buy fresh, local produce and goods while catching up with friends. As the moms worked behind the scenes, Max and Alex began planning and got the word out.

They purchased a website, www.comedykids.org, and the boys began to advertise around town. They put up posters, told their friends, called the local paper and even appeared on their school’s morning announcements. Every morning, they told a joke and reminded the students and staff to visit them at the farmer’s market to help them raise money to support pediatric brain cancer research.

Q: What did the fish say when he swam into the wall?

Max and Alex knew they could pull this off. They’re such close friends they finish each other’s sentences. They also bicker like an old married couple: their humorous dialogue entertains everyone within earshot.

Max: We’ve known each other for three years

Alex: No, no, actually more.

Max: I think four years. We met in kindergarten.

Max: Yeah, but we weren’t best friends then. We did play with each other.

Alex: But we didn’t sleep over. It was bring something that you want to have sleep over at the library.

Max: Oh yeah, and I brought Howie, a huge giant bear, remember him? It was as big as me at that time. 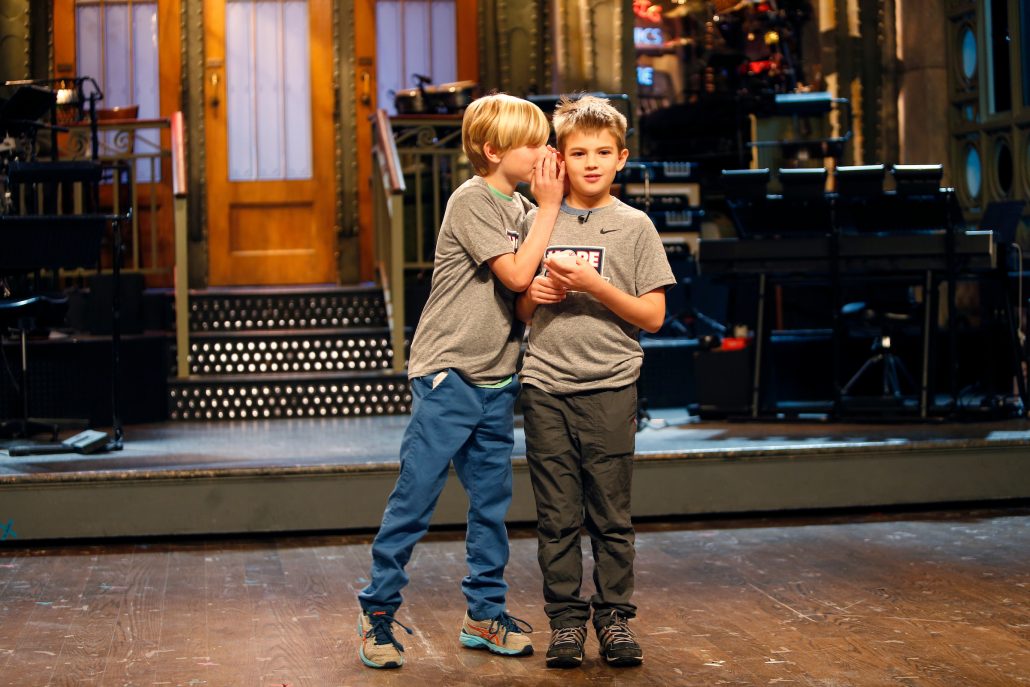 Alex and Max on stage at Saturday Night Live.

On November 5, 2016, they set up a table at the Farmer’s Market. They placed a box filled with jokes on top– some they created on their own and some they got from books or the Internet. Each person who approached the table was asked to make a donation in exchange for selecting a joke. The average donation was $20.

Comedy Kids had several hundred visitors that day. They also received donations via their website from friends and family around the country. Each time a donation is received online, the boys send a joke by video as a thank you. By the end of six weeks, they had raised over $20,000 – all of which was donated to pediatric brain cancer research.

Q: How do you drown a hipster?

A: In the mainstream!

The Farmer’s Market was their warm up act. Two days later, they decided to take their show on the road, via other children throughout the country. The boys hope to inspire others to use comedy to raise money for whatever cause they support. Max and Alex have developed a kit, free to any child, which includes joke cards, two t-shirts and two pairs of Groucho Marx glasses, that timeless comedic prop. Comedy Kids also provides tips on how to create a successful event, including location suggestions, how to spread the word and even how to contact the local news. They’ve already received orders from New Jersey, Texas and Hawaii.

Comedy Kids recently launched a podcast. The boys’ first interview was their friend Ryan; he taught them how to armpit fart. They have conducted several more, all no longer than seven minutes, and are currently in the editing phase. Max and Alex are also on social media, posting jokes, using hashtags and creating videos. They have a Facebook account, they tweet and they’re even on Instagram.

Max: We’re not comedians. We’re not like Billy Eichner or Ben Aarons.

Alex: Well, I consider myself a comedian; he doesn’t. I like the title.

Max: Actually, I am a comedian, I’m like Billy Eichner. Like Billy on the Street! He’s my favorite comedian.

Alex: The part he likes the most about Billy Eichner is the curse words!

Max: No, that’s not what I like the most! He asks questions to random people and makes weird faces to the camera. He’s like (makes a face)….

Alex: That makes you look meshuganah.

Q: What has 18 legs and catches flies?

A: A baseball team.

In May, the Comedy Kids were treated to the surprise of their lives: they were honored by the New York Yankees as part of HOPE (Helping Others Persevere and Excel) Week. That morning, the boys, their moms and sisters were brought to Manhattan where their first stop was Saturday Night Live. While standing on the stage, one by one five Yankees players walked out, greeted the boys and handed them a $10,000 check: $2,500  was donated to A Kid’s Brain Tumor Cure and the remaining $7,500 was given to their new campaign with the Dana Farber Cancer Institute. After reading cue cards and telling jokes to the Yankees, the Yankees had their turn to entertain Max, Alex and their families before everyone sat down for lunch.

After lunch, the boys headed to The Tonight Show where they met Jimmy Fallon, joined him in the “Tight Pants Dance” – one of their favorites, sat in his chair, gave him bunny ears, ate The Tonight Dough ice cream with him and told jokes on his stage. The highlight? Jimmy Fallon’s tweet: “Those kids were funnnnyyyy!!!” with a picture of Jimmy, the kids and the Yankees. 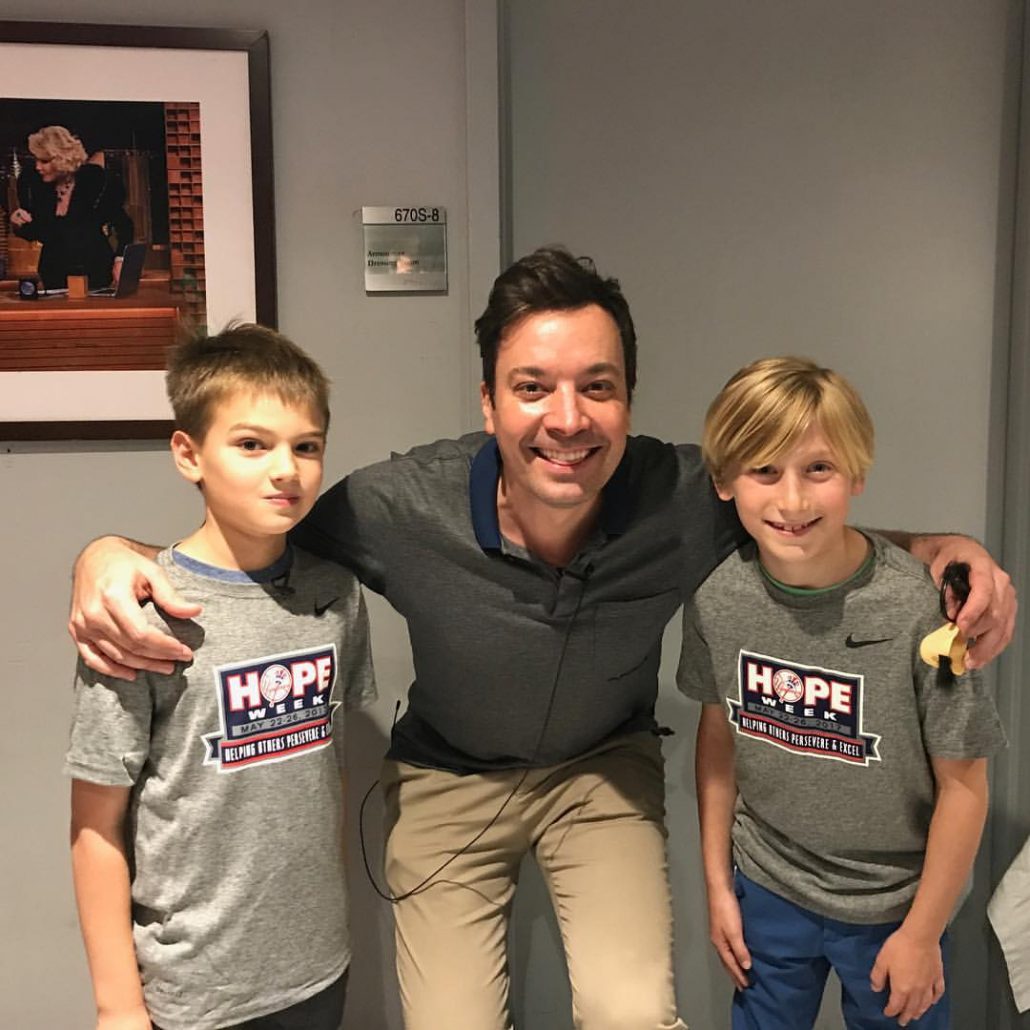 Q: How do you tell a snowman from a snowwoman?

Once they arrived at the Yankees game – the only part they knew about in advance, Max and Alex were on the field for batting practice, met Yankee’s Manager Joe Giradi who wore their shirt throughout his pre-game interview, sat in the dugout, threw out the first pitch, received signed baseballs, ate in Legends restaurant and were presented with awards on the field. They Yankees beat the Kansas City Royals that day, and their day ended with high-fiving the team.

“They were shocked about everything – the whole day,” recalls Robin. “They repeatedly said it was amazing and awesome. The next day, they had a hero’s welcome at school.”

It all goes to show. It’s never too early to dream big, or try to heal the world with humor… one joke (and pair of Groucho glasses) at a time. 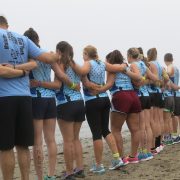 The Illustrated World Of An Autistic Superhero-Artist
Don’t miss one more amazing story.
Every week, we’ll send a few of our favorite stories to inspire you.
Send this to a friend
Scroll to top