Knitting Together Against Breast Cancer

Inspired by a prosthetic made of yarn, Barb Demorest is building an international network of knitters and doctors to support women.
breast cancer 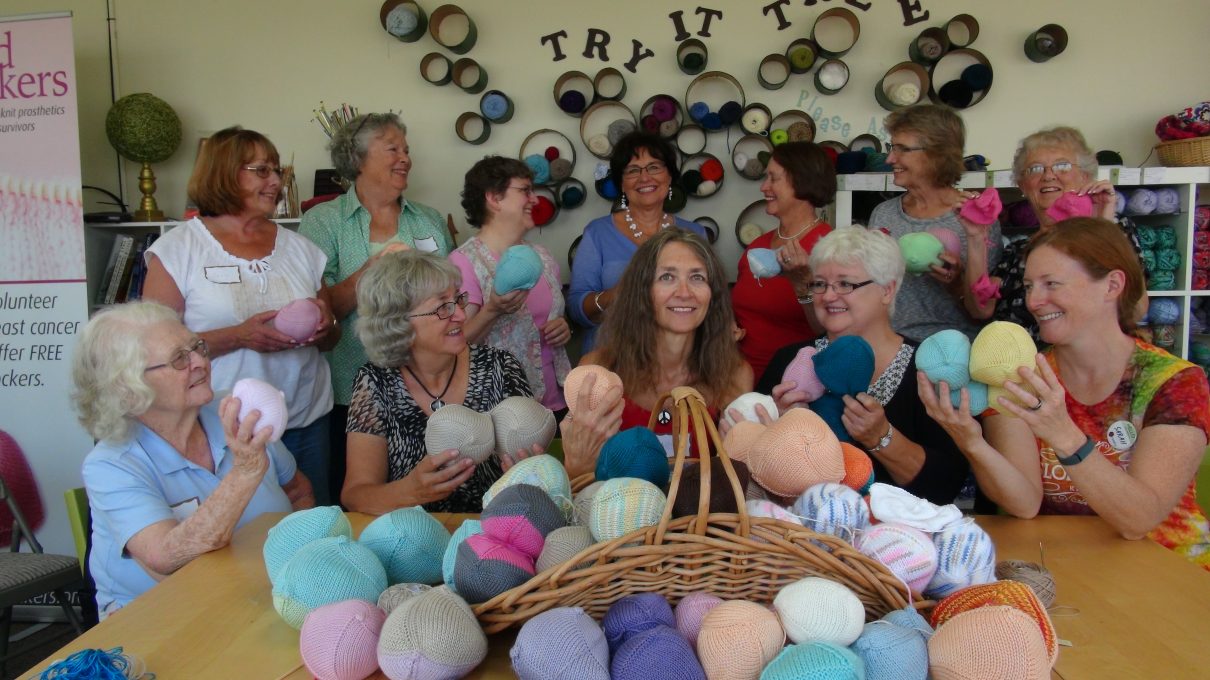 Inspired by a prosthetic made of yarn, Barb Demorest is building an international network of knitters and doctors to support women.

Demorest is the founder of the Bellingham, Washington-based Knitted Knockers Support Foundation. It’s a volunteer-run nonprofit organization that helps create and supply exterior breast prosthetics made from soft yarn and fiberfill, free of charge to women who have had all or part of a breast removed due to breast cancer or other diseases through a mastectomy, lumpectomy, or related surgical procedure. Designed to resemble a natural breast and fit inside a regular bra, they provide a plush, light, cool alternative to traditional silicone or gel breast prosthetics, which many women find to be hot, heavy, sweaty, and expensive.

With her organization, Demorest provides prosthetics to individuals directly through its website and helps connect knitters, fabric artists, and yarn shops together with nearby medical clinics to support women in their local communities. At last count, the non-profit had 170 affiliates registered in 49 states and nine countries, with more being added regularly. Demorest says they mail approximately 1,000 breast forms each month from her Bellingham base alone and estimates that they and their affiliates have distributed more than 20,000 knit prosthetics since she launched the organization five years ago.

Demorest was diagnosed with breast cancer in 2011. She’d originally planned to undergo both a mastectomy and reconstructive surgery simultaneously, but due to complications was unable to have reconstruction immediately. She woke up in the hospital with one breast missing and no idea what to do next.

“I was not prepared,” Demorest says. “I was going to be reconstructed. It didn’t even cross my mind that I would need [a prosthetic].”

Silicone breast prosthetics are a common solution for many women who do not or cannot undergo reconstructive surgery. But they come with a number of downsides, including, as Demorest discovered, their unsuitability for women who’ve experienced surgery complications, nerve damage, or pain sensitivity. When she asked about the option of silicone prosthetics, Demorest was told she would have to wait to wear one for at least six weeks.

“That was the first time through the whole experience I cried,” Demorest says. “That was truly the lowest point for me.”

It’s not unusual for certain health conditions to result in the change of a person’s physical appearance. For some, this aesthetic change can be acceptable, empowering even. For others, it can be disheartening and diminish their confidence and self-esteem.

A local volunteer group gets to work.

For a woman who has lost a breast or breast tissue or undergone radiation, the resulting physical changes can affect her silhouette and create a shape or asymmetry that is unpleasant or unfamiliar. Her clothes may hang differently or bunch or twist. She may receive unwanted attention for looking different.

While some women feel comfortable foregoing reconstructive surgery and prosthetics altogether — a choice Demorest emphatically supports — others, especially after the mental and physical trauma of dealing with their disease, just want to get back to some semblance of normalcy, whatever their personal definition of normal may be. For Demorest, normal meant looking and feeling comfortable in her clothes and going out in public without feeling self-conscious about her body. “I wanted to reengage in life,” she says.

She would find that reengagement — and ultimately her life’s calling — in the ladies’ room of her local church.

At her doctor’s suggestion, Demorest, with the help of longtime friend Phyllis Kramer, set out to investigate this thing her doctor had heard of: a knitted breast prosthetic. He’d never seen one in person but thought the idea worth exploring as a possible prosthetic alternative that might be light and soft enough to wear against sensitive, healing skin. Following a pattern she’d found on the Internet, Kramer knitted a pair of different sizes and brought them to church with her that following Sunday.

Some women find it painful to wear silicone breast prosthetics.

It was Demorest’s first outing since the mastectomy. She’d stuffed her bra with a sock to appear more balanced and had draped herself in a baggy jacket to mask her shape. She hadn’t known Kramer would be bringing the prosthetics to church that day, but when she was handed a mysterious Victoria’s Secret bag, she says, “I grabbed that bag, and I rushed into the bathroom and into the bathroom stall.” She describes the prosthetic that fit best, knitted in a soft beige, as “the most beautiful thing I’d ever seen.”

In an instant, Demorest rediscovered herself. “I pulled the sock out of my bra, and I put [the knitted prosthetic] in there, and I whipped off that jacket, and went back out. It changed my attitude so much. Instead of coming in all meek and nervous and self-conscious, I was me again. I can’t explain it. It sounds dramatic, but it truly was for me. It literally changed my life, that moment.”

That moment gave Demorest a boost in confidence and a new mission. “I knew right away that we needed to provide these to our doctors,” she says, and make it easy for patients to walk into their doctor’s appointments and walk out with a hand-knit prosthetic. As a patient she already had the connections to lay the groundwork for Knitted Knockers. “I had that network built for me. I was seeing doctors for the next three years, so I had the inside track.”

With her knitted prosthetic and self-esteem back in place, Demorest returned to her job as a CPA but found her attention wavering and her time in short supply. She’d never planned on taking retirement, but even though she says her employer of 25 years had been “wonderful,” she found that her heart was with the foundation. To say she’s retired now, however, would be a misnomer. “I’m working way harder,” she says, “and way more than I ever did for a paycheck, that’s for sure.”

I’m working way harder than I ever did for a paycheck, that’s for sure.

Part of her organization’s success comes from how hard Demorest has worked to make the knitting and distribution process easy. The prosthetics themselves are quick and easy to knit and can be shared directly or mailed, unstuffed, to the Bellingham group for finishing and distribution. The organization’s website makes patterns and how-to videos freely available without registration, which have been viewed and downloaded more than 200,000 times. They even provide pamphlets and other promotional materials to yarn shops and medical clinics, facilitating the mailing and marketing so knitters and doctors can concentrate on what they do best.

Demorest calls her breast cancer experience, even the complications, a blessing. “If I had been immediately reconstructed,” she says, “I would’ve gone right on my merry way and never even known about this. It’s been a gift to me to be able to give back [through the organization].”

People sometimes feel that the name of Demorest’s nonprofit, Knitted Knockers, is a bit flip. But, she says from experience, “I’m the last person who would want to make light of breast cancer.” Demorest didn’t create the name for the prosthetics — they were known as ‘knitted knockers’ online long before she’d found out about them. Many people love and have embraced the name, so she rolled with it. “I do understand that there’s some who do not like it, and I apologize for that. We do not want to offend anybody. We wouldn’t be investing all this time and energy and love and caring if we didn’t take it seriously.”

The accolades she has gotten from the breast cancer community underline that seriousness.

Demorest is one of only four people (besides Susan G. Komen herself) to be honored on the Komen Foundation headquarters’ Promise Wall, and this October she plans to travel to Rwanda in conjunction with another organization to speak at a breast cancer event and train local women how to knit breast prosthetics. The best way to help there, and everywhere, she says, is to equip local communities with the means and knowledge to make them for themselves.

Demorest and her army of volunteers have shipped out over 20,000 knit breast prosthetics in the last five years.

Her nonprofit is built upon this give-a-man-a-fish foundation, coupled with the philosophy to think globally and act locally. Demorest doesn’t want to build an international juggernaut with herself and her group starring at its center. In fact, her ultimate vision of success is to make herself and her local group nearly obsolete.

“My original vision,” she says, “was to equip at least two groups in every state to provide for their communities. I don’t think my vision has changed much, except it’s gotten bigger. I don’t want to limit it to two groups per community. We have 26 medical clinics on our waiting list right now to be supported. I don’t want it to stop. So the simple answer would be to equip every major city to provide Knitted Knockers to their own communities. That’s my goal.”

Demorest plans to continue to provide free resources and to distribute prosthetics and materials to individuals that don’t have local groups available. But her ideal vision for the future is to create a widespread network of affiliates that are able to replicate the work and partnerships they’ve accomplished in Bellingham in their respective regions. Demorest’s ultimate hope is to empower communities “to take us out of the loop. I would like,” she says, “to put us out of business.”

Jennifer Furner
Do you know someone else who would enjoy this story?
You might also like...
Fighting Cancer In A Country Without A Word For It
Kellie M. Walsh
Saxophone Colossus

Not Your Ordinary Santa Claus
Don’t miss one more amazing story.
Every week, we’ll send a few of our favorite stories to inspire you.
Send this to a friend
Scroll to top