The Left Foot Of The Fastest Woman Alive

Although her leg was deformed by polio as a child, Wilma Rudolph didn't let her illness stop her from reaching Olympic gold.
brain cancermeaslesphenumonia 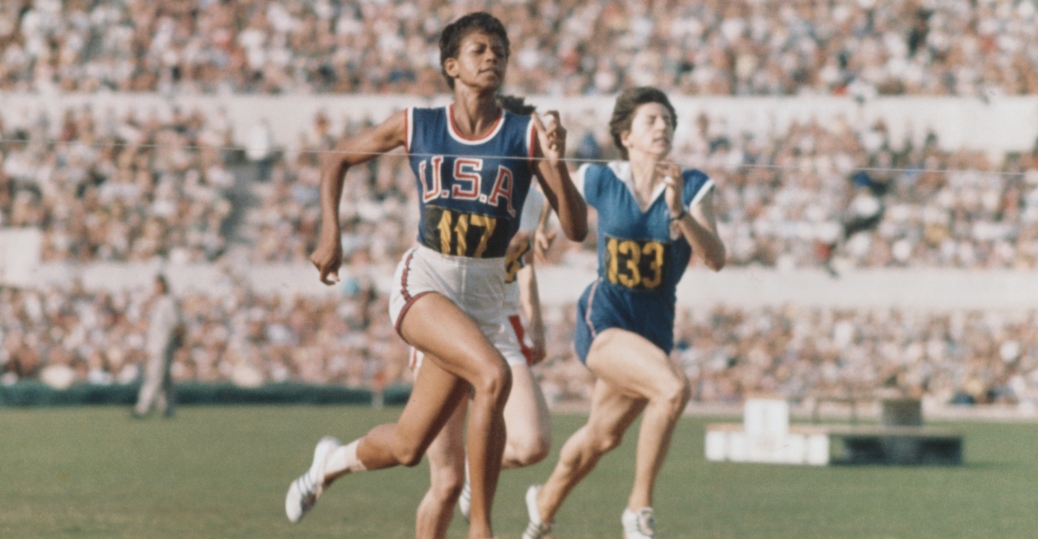 In her time, the world-record-setting sprinter Wilma Rudolph was often referred to as the “fastest woman in the world.” In the 1960 Olympics, she won three gold medals in track and field.

Every race was extraordinary. Her 100-meter sprint at the Rome Olympics on September 2, 1960 lasted just 11 seconds, the fastest-ever recorded time for a women’s run.

Rudolph wasn’t just fast. She beat records only after beating the odds. 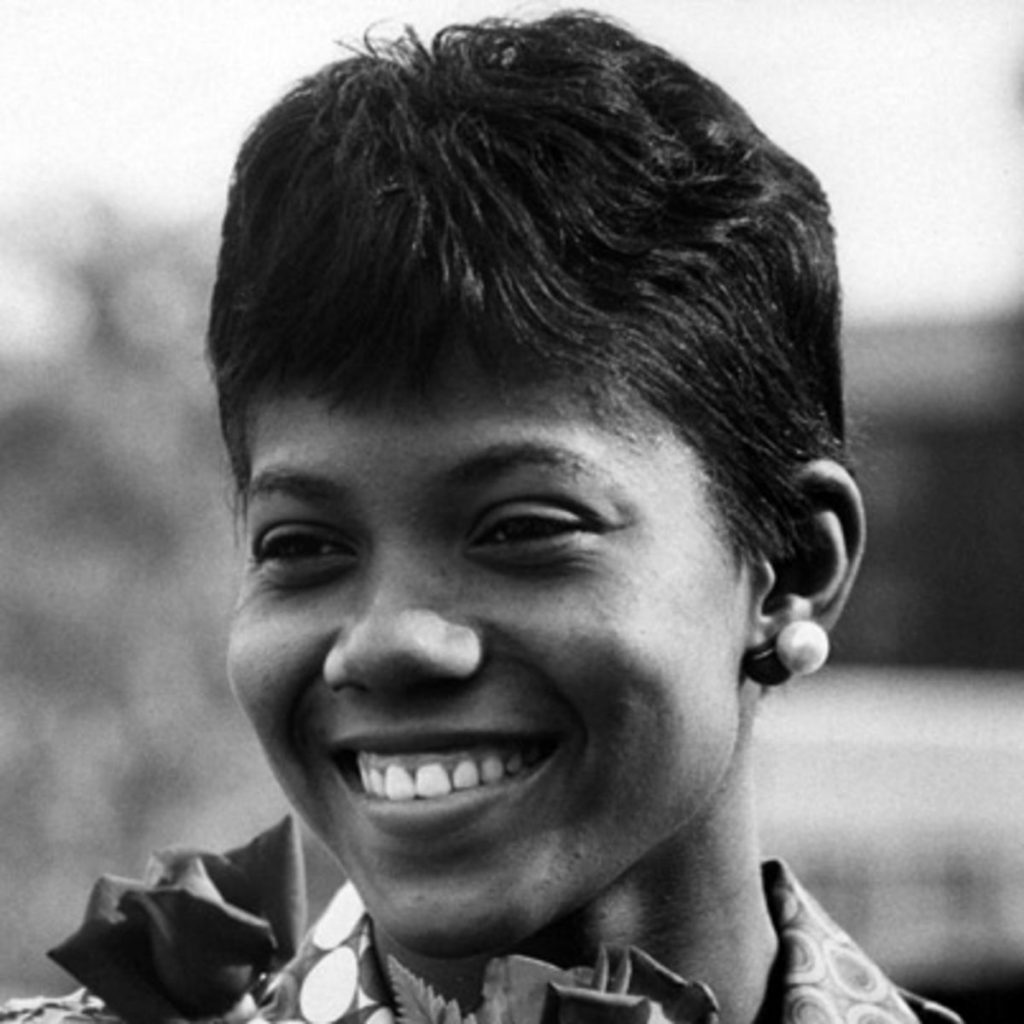 As a teenager, she trained as a sprinter despite a deformed left foot that kept her bedridden as a child, one of the lingering effects of polio that she contracted and ultimately beat at age 6.

Born prematurely on June 23, 1940 just outside of Clarksville, Tennessee, Wilma Glodean Rudolph was the twentieth of her father Ed’s 22 children (the sixth of her mother Blanche’s eight). She contracted polio when she was just four years old and was forced to wear a metal leg brace to help correct the condition’s impact on her lower left limb.

Rudolph told ESPN that she spent most of her bedridden childhood trying to break out of the brace but added, “When you come from a large, wonderful family, there’s always a way to achieve your goals.” It helped that her many siblings would take turns massaging her legs every day. By age 6, she could hop on one foot; by age 8, she was walking with the leg brace.

In her 1978 autobiography, Wilma, Rudolph explained how she stayed optimistic: “My doctor told me I would never walk again. My mother told me I would. I believed my mother.”

She also wrote, “My father pushed me to become competitive. With so many children, when you did something with one, you always had another along. He felt that sports would help me overcome the problems.”

It wasn’t just polio that nearly sidelined her. Rudolph also suffered from and survived a number of other diseases of the day, including whooping cough, the measles, double pneumonia, and scarlet fever. The latter two nearly killed her.

But by age 11, she was on her feet—literally.

The story goes that her mother came home to find her playing basketball barefoot.  She began competing in various middle school sports and “challenging every boy in our neighborhood at running, jumping, everything.”

She was an especially talented basketball player and tried several sports before famed track coach Ed Temple spotted her potential and recruited the burgeoning star to be his protégée. At the time, Temple was a volunteer coach while also working as a sociology professor at Tennessee State University in nearby Nashville. He went so far as to drive his team of so-called Tigerbelles to meets in his own car and personally paid to have the school’s unmarked dirt track lined.

Rudolph first competed in the 1956 Melbourne, Australia Olympic Games, winning a bronze in the 400-meter relay race. Back at home, she secured a scholarship to attend Tennessee State where Coach Temple continued to train the young star, as well as several other young African American women Olympians. In 1959, she won gold in the 4×100-meter relay at the Pan American Games.

Rudolph’s banner year was 1960, when she went to Rome and won Olympic gold multiple times—and also set a world record. But fate nearly tripped her up again when, the day before the 100-meter dash, she stepped in a hole near the practice track, twisting her ankle hard.

She iced and compressed her foot and soldiered on, beating even reasonable expectations. She easily won the 100-meter heat, quarter-final and semi-final in what should have been a world-record 11-seconds flat. Were it not for a strong wind advantage, she would have taken the record plus the prize for her quick dash.

In the 200-meter, she set a new Olympic record of 23.2 seconds in the heats and won the final with 24 seconds. For this, the title “fastest woman in the world” stuck. She then anchored the relay team again, helping her teammates to come from two yards behind to win the gold with a three-yard victory in a world-record 44.5 seconds.

Her celebrity came at an awkward time in world history. Focusing both on her race and speed, the international press imposed a range of dated nicknames. The French media, for example, dubbed her La Perle Noire, or “the black pearl.” When she arrived home from the 1960 Rome Olympics, the ticker tape parade celebrating her victories was slated to be segregated. She claimed another victory when she flat-out refused to attend her own procession, forcing Clarksville city officials to change the policy and integrate its first-ever municipal event.

Like many of her celebrated peers of the era, Rudolph also benefitted greatly from that year’s first-ever Olympic Games television broadcast. Boxing dominated much of the 1960 summer games, most notably Muhammad Ali’s gold medal knockout victory over Poland’s Zbigniew Pietrzykowski. But even track and field stars such as Rudolph had their games broadcast back home, albeit with a delay. At the time, there was no satellite connectivity between Italy and the United States. CBS producers flew the footage back to the States for a delayed telecast. 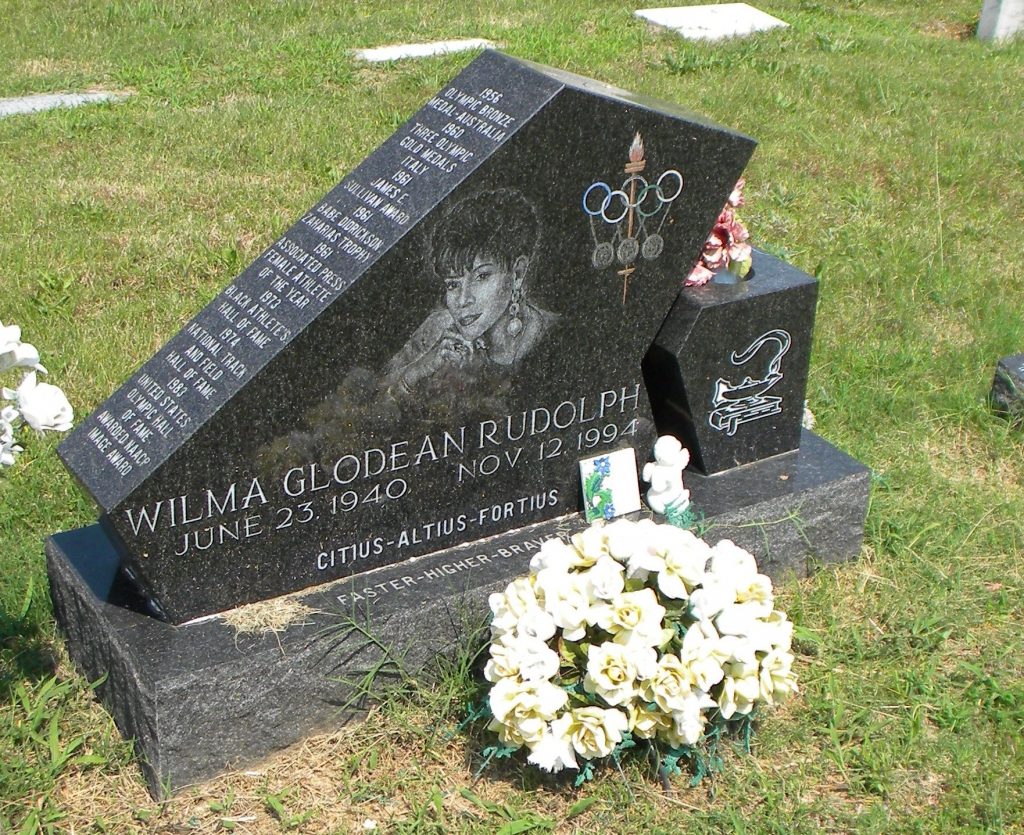 Wilma Rudolph’s grave remembers her as a champion.

Even though she won the 1961 Sullivan Award for top amateur athlete in the U.S., male or female, Rudolph’s competitive career was ultimately about as short as her sprints. In 1962, she retired her running shoes. “I couldn’t top what I did, so I’ll be remembered for when I was at my best,” she explained, according to her obituary in the New York Times. There was also no money or professional path for a runner, and so she took a different route. She completed a degree in teaching and went on to do just that, as well as coach track and field at Indiana’s DePauw University and act as a U.S. goodwill ambassador to French West Africa. She also created a foundation in her own name, which supported community-based amateur athletics. “If I have anything to leave, the foundation is my legacy,” she said.

Her career may have been short-lived, but her inspiration to younger generations had legs of its own. It took until 1988 for another runner, Florence Griffith Joyner, to catch up as the next woman to win three gold medals in one Olympic Games. “It was a great thrill for me to see,” Rudolph told ESPN. “I thought I’d never get to see that. Florence Griffith Joyner—every time she ran, I ran.

Rudolph lost her battle with brain cancer in 1994. In 2004, the U.S. Postal Service honored Rudolph’s racing record by depicting her likeness on a 23-cent stamp. Though not as widely known as some sporting greats to come of age in later, more media-centric decades, Rudolph’s name still carries significant weight. One of the most prestigious awards in the industry, the Wilma Rudolph Courage Award from Women’s Sports Foundation, reminds younger generations of the woman who paved the way and continues to inspire young women athletes to reach for the gold.

The Blind Mountain Hiker Who Paints What He Feels
Don’t miss one more amazing story.
Every week, we’ll send a few of our favorite stories to inspire you.
Send this to a friend
Scroll to top