We Are Legion, We Anxious People

Author and ex-dominatrix Kat Kinsman talks about how to defeat "the feral cat to depression's black dog" and "coming out" as mentally ill.
depressiongeneral anxiety disorder

Dancing, driving, getting a haircut, seeing the doctor, talking on the telephone, getting trapped in a crowded subway car, and picking up a pair of shoes from the cobbler: These are a few of writer and editor Kat Kinsman’s irrational fears. She knows they’re irrational, but that knowledge doesn’t stop her from blanching in terror at a FaceTime request, or plotting escape routes while standing as close to the doors as possible whenever she rides a train.

Kinsman, a senior editor at food website Extra Crispy, was diagnosed with Generalized Anxiety Disorder at age 14, and has been plagued by what she calls “the feral cat to depression’s black dog” ever since.

She’s far from alone: 18 percent of Americans have been diagnosed with an anxiety disorder, two-thirds of them women, according to the Anxiety and Depression Association of America (ADAA). The average age of onset is 11.

“We are legion, we anxious people,” Kinsman writes in her painful, funny new memoir, Hi, Anxiety: Life With a Bad Case of Nerves. But the stigma surrounding mental illness leads many to suffer in silence: “We hunker and hide in fear of being judged imperfect, unlovable, high maintenance, and insane. We do not speak of it.”

Kinsman wants to change that. Her brave, confessional book is a plea to normalize the conversation surrounding mental illness. Anxious readers might find solace in seeing their own battles reflected in hers, while lucky unaffected readers will come to better understand the plight of their clinically nervous friends. 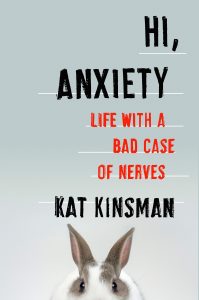 The cover of Kinsman’s memoirs.

In her book, Kinsman recalls her quaking hands during a kindergarten read-aloud; the “stomach-sick, rot-brain, dizzy-headed, sweat-soaked-sheet” weeks of withdrawal from the antidepressant Effexor; and panic attacks that leave her crumpled on the floor.

Why did you write a memoir about anxiety?

I wanted to normalize the conversation about mental illness and put out a plea for better care. I realized the amount of privilege I have: the more I talk about mental illness, the more I talk to people who can’t afford healthcare. I’m sick of the stigma, of people feeling like less than they are. I’m sick of excellent humans feeling like freaks when we’re all struggling.

I’m sick of excellent humans feeling like freaks when we’re all struggling.

Did the process of writing about being anxious make you anxious?

The book was pretty awful to write. There’s some stuff in there that I’ve never told anyone. But I thought that if I experienced these things, someone else probably did, too, and this might relieve them of feeling like a freak and broken. I wanted to be that kind of light in darkness, for people to see their own experiences reflected out there.

I like to channel my inner frat boy. When I worked at Maxim, I sometimes adopted the persona of this dude Chet. Chet’s not a bad guy. But Chet sees what Chet wants and Chet’s gonna get it. He deserves it, he’s worthy of it. I see people like Chet, who just assume things are there for the taking, and it just wouldn’t occur to them that world wasn’t built for them. They mean no harm, they’re not bad people. They’ve always been told the world is for them.

I remember a good friend telling me she didn’t think she was worthy of stuff that she’d been given. But if not you, who? You’re a great person who goes out of the way to make people feel understood and normalize the conversation. If you don’t deserve good things, then who the hell does?

I remember a good friend telling me she didn’t think she was worthy of stuff that she’d been given. But if not you, who?

When the political world seems to reflect your inner chaos–as it has in the past several months–how do you cope with anxiety? What has your experience with anxiety been like in the wake of the U.S. presidential election?

It’s hard to separate out the strands of anxiety as of late. The book came out week after election. Before that, my mom was very sick. And there’s all this free-floating anxiety that I have anyway. All of a sudden, it had something to stick to. It’s hard to unravel the threads and figure out which is which. Talking about mental illness has been normalized lately because even people who had previously not experience Generalized Anxiety Disorder were suffering from panic attacks from very specific fears tied to the political landscape. I had a couple friends end up in ER after having panic attacks; they thought they were dying.

What do you suggest as coping devices for politically-induced anxiety?

I’m not going to tell anyone they shouldn’t be scared, because we all should. It’s entirely rational to be frightened right now. It’s disturbing when you have GAD–this free-floating, out-of-the-blue physical upset—-so it’s almost kind of a relief to have something concrete to tie the anxiety to, because then you can do something. In this case, it’s a little easier to metastasize into anger and action. But you also want to avoid hyper vigilance–the feeling that ‘Oh, if I don’t make that phone call to my congressman, or stay up late refreshing Twitter, the world’s gonna end.’ Not everything is resting on your shoulders.

Preemptive worry and magical thinking doesn’t solve anything. You’re allowed to take care of yourself and rest and be a person. The battle is not going away anytime soon. There’s a long haul ahead of us. I think you can calm yourself without normalizing anything. I’ve been doing this myself: Set an alarm or reminder on your phone to stand up and breathe once or twice day. Give yourself the luxury of standing and taking a couple breaths.

You talk about “coming out” as anxious or otherwise mentally ill. Do you have any tips for people who want to talk for the first time to friends, family, or employers about their mental illness?

I think the internet can be a really great safe zone for a lot of people. Even if you can’t be public [about your mental illness], you can find support in strangers on the internet. Weirdly, the anxiety group on Reddit is fantastic, incredibly empathetic and supportive. Pockets of the internet in pockets are kinder than people could imagine.

Nobody ever died of a panic attack. Even if it feels like it…

As for personal relationships, if you’re “coming out” in blog posts, or on social media, if there’s someone who pushes back at you because of that, they don’t deserve to have you in their life. If you’re saying ‘Hey, I’m a vulnerable person, I have this illness,” and they’re not willing to be sympathetic, you should reevaluate your relationship with them. Part of taking care of yourself is figuring out who you want to voluntarily spend time with. I believe very strongly in chosen family, and I’ve taken care to surround myself with people who are good, supportive, and have my best interests at heart.

Come armed with some things for them to read. Some sites with good mental health coverage are The Establishment, The Mighty, a new site called Anxy is coming out. “Here’s what it is, you don’t have to be afraid. You have a new piece of information about me, or maybe an answer—here’s why I don’t go to parties, or why I flaked out, or why I’m always late. Here’s an explanation. Maybe we can start a dialogue about it.”

Kinsman at a recent talk.

What’s the most helpful thing a shrink has ever told you?

“Nobody ever died of a panic attack.” Even though it feels like it–it feels so much like you’re dying when a panic attack is happening—you aren’t. That’s really helped me get through a lot. To know that I’m not actually dying when [a panic attack] is happening. That’s hugely helpful. Also, a therapist taught me how to do three deep breaths, in through my nose and out through my mouth. I saw him on and off for 15 years, and he drilled that into me.

What are your favorite books about mental illness?

Brain on Fire: My Month of Madness, by Susannah Cahalan—it’s not about mental illness per se, but a brain disorder that made her crazy for a brief period, and what she learned about life and how people regarded her when she was in this state. Atlantic editor Scott Stossel’s My Age of Anxiety—that book did a huge amount to really open up the topic of anxiety in contemporary books.  It’s really tremendous, and also surprising—you’re the editor of this tremendously influential publication, and you have all this? I love how Roxane Gay puts all her stuff out in the world, the way she talks about her issues fitting into world. Whether you can relate to them or not, they’re so thoughtfully and humanly presented that if you don’t like her writing, I think there’s something slightly off in your soul.

You write a bit about impostor syndrome–about the fear of being found out that you’re not a “real” reporter while writing about food on CNN. Now that you’ve published a book, are a senior editor of a Time, Inc. website, and have received all kinds of positive feedback about your work, do you still feel like an impostor?

Even more so. Now there’s an actual document and people are gonna think, “Why her?” With greater exposure comes greater risk. I had a stress dream the other night that someone a former colleague reviewed the book, and he had been waiting the whole time to do a takedown of me—to say what a terrible writer, reporter, and human being I was. 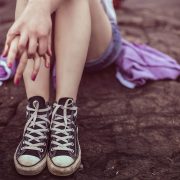 What To Do When Your Teenager Has Depression
Patti Woods
How Do You Talk To Your Kids When You Have Cancer?

Bipolar, Face-Blind, And Internet Famous
Don’t miss one more amazing story.
Every week, we’ll send a few of our favorite stories to inspire you.
Send this to a friend
Scroll to top