For babies with mobility issues, the cool ride-on cars provided by Go Baby Go! are even better than motorized wheelchairs.
albinismangelman syndrome 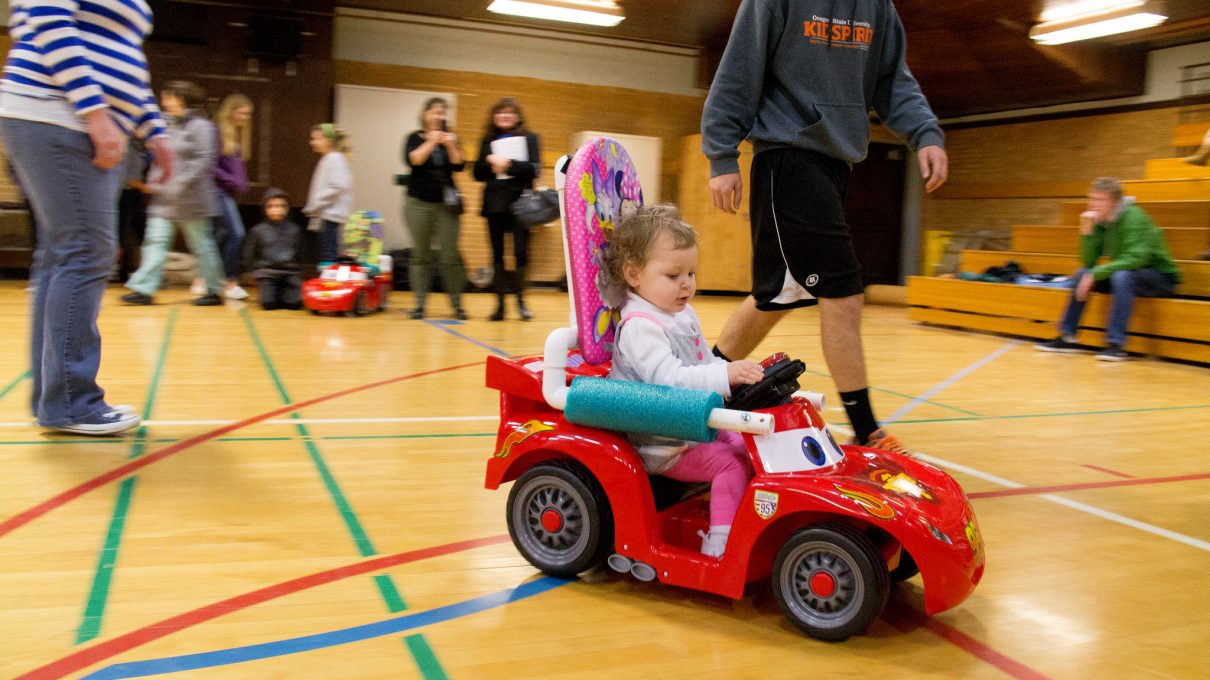 “Nobody outside of our circle really knows that [the car is] a form of mobility for him,” David says. “It doesn’t look like medical equipment. It doesn’t draw attention to itself.” David is referring to the car that was modified for Colin through a program at the University of Central Florida (UCF) called Go Baby Go!.

Colin has visual impairments caused by albinism and mobility issues caused by a rare genetic disorder called Angelman Syndrome. Colin’s speech language pathologist at UCF suggested that he might benefit from a modified ride-on car and referred him to Dr. Jennifer Tucker in UCF’s physical therapy department.

David has observed that, since Colin got his car this past spring, it seems to have broadened his worldview. “I think he’s realized there’s more to the world than what’s in his bubble, what was previously in his visual field,” she says. “We’ve seen him figure out how to map around the house now. It’s really instigating and encouraging that exploration by giving him a tool to do that.” 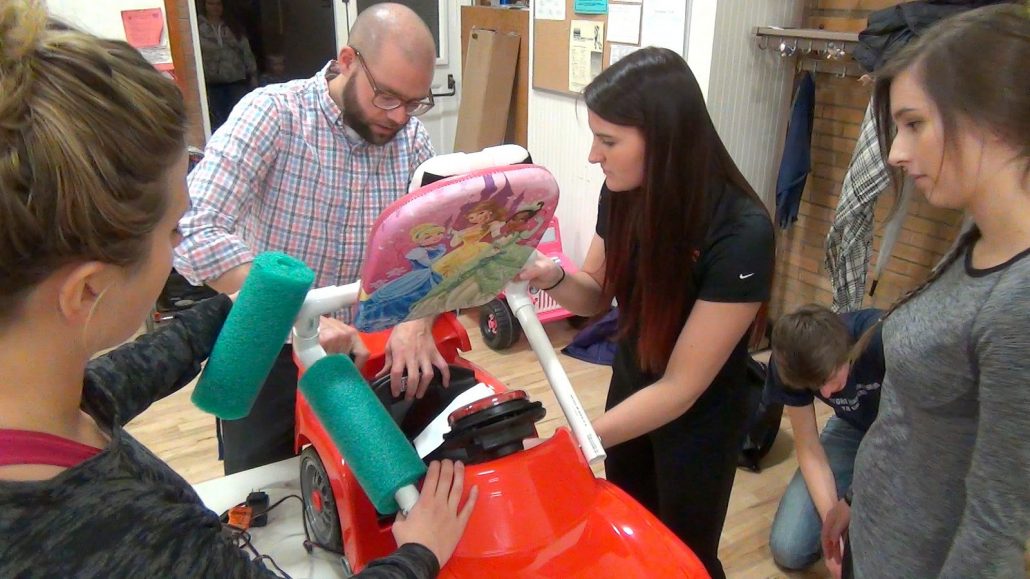 Researcher Sam Logan and a team of volunteers modifying an off-the-shelf ride-on car to be safe for kids with mobility issues.

A motorized wheelchair can cost tens of thousands of dollars since it’s a medical device, but a modified ride-on car for kids costs around $200. “Motorized wheelchairs are much more robust in terms of battery life, and they can go in any direction,” says Sam Logan, an assistant professor at Oregon State University (OSU) who oversees an undergraduate student club that modifies cars.

The motorized wheelchair industry tends to focus more on adults since kids outgrow them so quickly. The cars Go Baby Go! modifies do not replace the need for other medical devices, but they provide fun and mobility for developing kids.“It’s not a perfect one-to-one solution,” he admits–motorized wheelchairs are still better–but a ride-on car can still give a child with mobility issues the first autonomy they have.

“It’s a pretty big deal for families,” Logan says. “A lot of these kids have not had any access to moving on their own [before].”

“A lot of these kids have not had any access to moving on their own [before].”

In addition to OSU’s student club, Oregon also has a monthly community build night in Portland. “Families will come and they have some of the modification supplies, or families will bring cars,” he says. “In one evening, they’ll modify the cars and families can take them home that night.” Once a child outgrows a car, the family can pass it on to someone else or give it back to Go Baby Go! so another child can use it.

Go Baby Go! started a decade ago at the University of Delaware, and now has 75 chapters worldwide, including a nationwide partnership with BMW New Zealand. 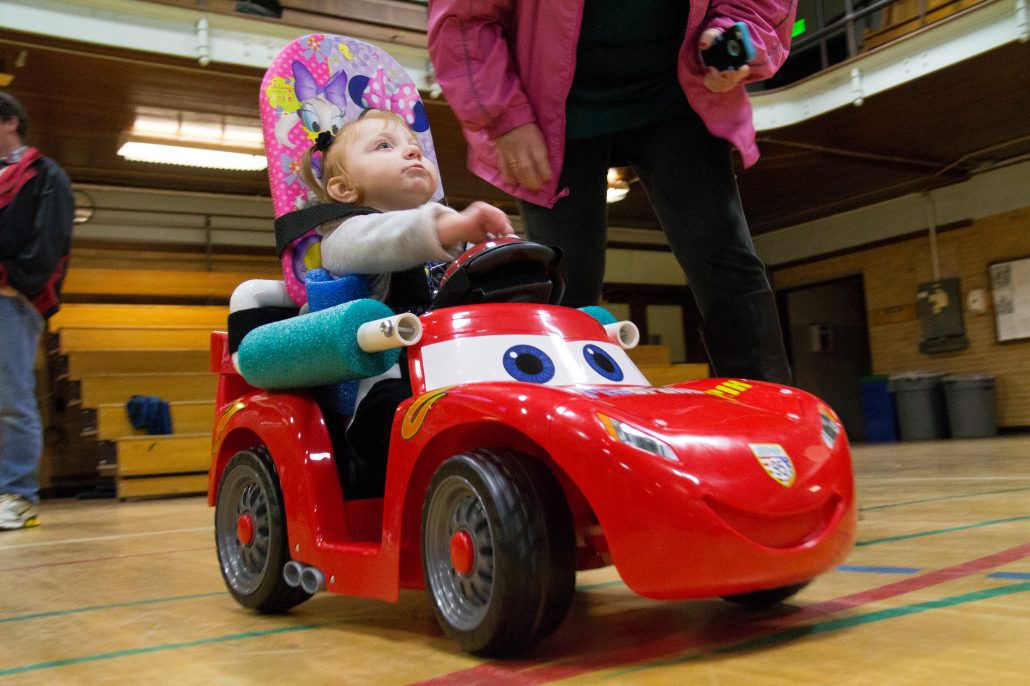 Go Baby Go cars give some children with special needs their first taste of real mobility.

Cole Galloway, a professor of physical therapy at the University of Delaware, received a National Science Foundation Award to study brain development in babies. Galloway’s research showed that he could spur cognitive and motor skills development in toddlers before they could even crawl using an experimental robot outfitted with a joystick. The robot cost tens of thousands of dollars to make and was intended for research. However, families of children with mobility issues desperately wanted one their child could use in real life so their child could move and develop too.

“I would get phone calls from parents crying on the answering machine,” Galloway says. “They kept asking me ‘when it is going to commercialized? When is this going to be available?’ They weren’t seeing it as research, they were seeing it as a real device.” He notes that parents of a two or three year old with mobility issues don’t have the experience of chasing around their child or watching the child chase a family pet, and they often worry about school readiness.

Galloway’s mentors advised him to focus on the research and let the community impact be someone else’s work,  but Galloway couldn’t turn his back. The question of whether he could also spur their development nagged at him. A high school student working in his lab asked, “Why don’t we go to Toys ‘R’ Us … and just build stuff?” Instead of manufacturing expensive robots for research, they bought little motorized ride-on cars and modified them for kids who couldn’t, for example, push a gas pedal or who needed extra trunk support to sit upright.

Instead of patenting these modifications, Galloway shared them freely with the world. Chapters have sprung up in universities, Kiwanis clubs, schools and other organizations. When Fisher-Price called two-and-a-half years ago, Galloway panicked. Would they object to him using the Go Baby Go! name (a name used on many of their toys) or modifying their product?

Actually, they said they loved the concept and wanted him to do a workshop with their designers. Galloway has also conducted a workshop for Daytona 500 and has plans for a workshop with Mattel. These hands-on workshops serve as a team-building activity and also provide a tangible benefit since they’re modifying cars to be used by real kids. “They are interested in corporate giving that provides a personal context,” Galloway says. 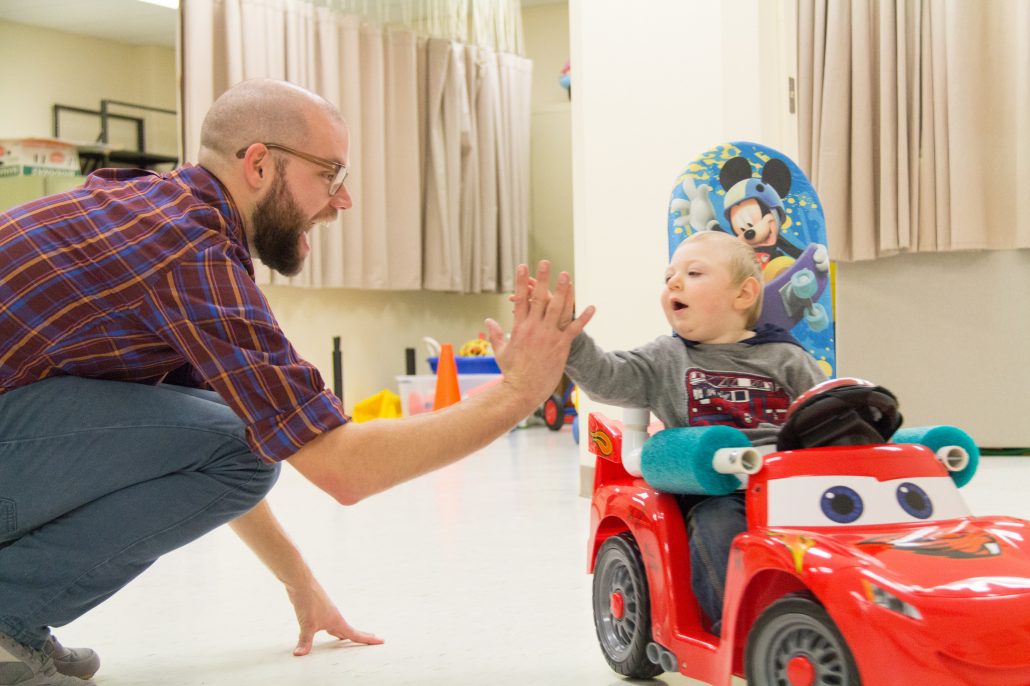 Aside from the stories of delighted families, Galloway says his preliminary research on children with Down syndrome also supports the use of ride-on cars for therapeutic purposes. “We believe that cognition language and movement are enhanced with ride-on cars,” he says. “A child that hasn’t been moving gets the chance to decide how and when to move.”

As for the David family, Colin started waving his hand after he starting using his car, so it’s also boosted his social engagement. “That’s really the first time that we saw him purposely wave,” David says.

As Galloway says, “mobility is a human right because it affects so much of our lives.” 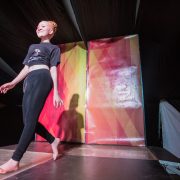 Breathing Free In The Most Asthmatic City On Earth
Don’t miss one more amazing story.
Every week, we’ll send a few of our favorite stories to inspire you.
Send this to a friend
Scroll to top