When Life Takes A Sharp Left

Carla Charter and her three kids all have one of the rarest conditions on earth. They get through it with ingenuity, togetherness, and a wicked sense of humor.
Chromosome 12q duplication syndromegenetic conditions 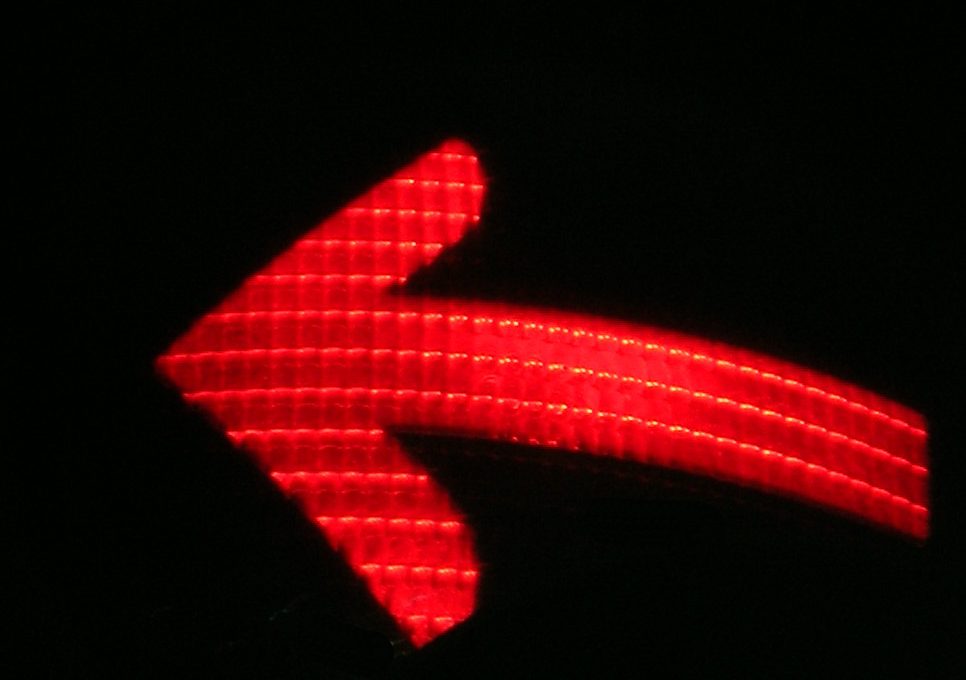 After years of investigations for other issues, Carla’s youngest child was diagnosed with chromosome 12q syndrome ten years ago. When the rest of the family was tested, doctors discovered 55-year-old Carla and her three children all had the syndrome. In fact, the Phillipston, Massachusetts family share an ultra-rare version of an already rare condition, which afflicts less than 100 others worldwide. 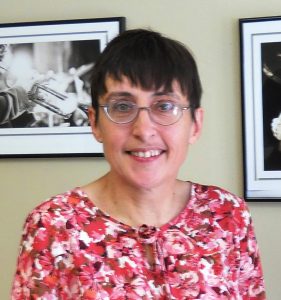 Carla Charters at an author signing.

Chromosome 12q duplication syndrome is a disorder where three copies of the long arm of chromosome 12 are present instead of two. Carla and her children are fortunate – they’ve escaped the most severe aspects of the condition, which can result in serious problems ranging from mild deformity to infant death.

While a shock, the diagnosis filled in a few blanks for Carla and her children. They now knew it was not simply a coincidence they all wore glasses, and why they suffered unusually high numbers of dental problems.

For the pragmatic Carla, the diagnosis didn’t change much, at least at first. “We’d all been living with the issues all along. Now we had a name for it,” she explains.

The diagnosis simply meant knowledge, a tool Carla could use to shore up against future problems. “Having a name made it easier because I didn’t feel like I was fighting shadows anymore. When something came up I knew where it was coming from. I wasn’t waiting for the other shoe to drop, waiting for the next issue.”

The whole highway exit disappeared and came back – there was a black wall where the exit should’ve been.

For a while it was business as usual in the Charter household. However, five years ago, an alarming experience turned Carla’s world upside down.

Driving home one night along the motorway, kids in the back seat, Carla suffered a frightening visual disturbance. “The whole highway exit disappeared and came back – there was a black wall where the exit should’ve been.”

She was diagnosed with visual processing problems. Her eyes worked perfectly, it was her brain that was scrambling the information. At first the disturbances happened only at night, until one day, during another car journey, she couldn’t tell whether a police officer was stopping her or waving me on. “His hand was melting into his body,” Carla described. “And that was the end of my driving.”

Three or four months later, Carla began to be plagued by hearing problems. In a similar way to the visual processing, her brain randomly scrambles information. “I can hear the sounds but I can’t make out what the words are,” she says.

Six months after that came the exhaustion. “Every mid-lifer gets tired, but I was coming home and having naps at three o’clock and not waking up till eight or nine at night.” To help with the fatigue, Carla used a cane for a few months, before graduating to forearm crutches. Now, she’s dependent on a wheelchair most of the time. 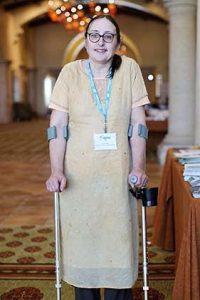 Despite mobility issues brought on by her condition, Carla stays as active as she can.

With little information to go on, her doctors are scratching their heads, uncertain if the duplication 12q is causing Carla’s symptoms, or if it’s something else entirely.

Although the last five years have thrown up a daunting number of hurdles, Carla’s faced each obstacle square in the face.  “You can either sit at home and do nothing, or you can find your way around it,” she points out. Carla’s way is sheer determination – and a lot of door knocking.

A call to Massachusetts disability services group Easter Seals pointed her in the direction of a few apps that have transformed her daily life. Tap Tap See identifies household goods: bottles and cans in the kitchen; prescription labels and medicines in the bathroom. Another app detects the color of her clothes when her vision’s blurry in the mornings. She uses the Able Road app to find disability-friendly locations: local restaurants with wheelchair access, or eateries with large-print menus on the days her vision isn’t so good.

An app called Emergency Chat helps on the days Carla’s hearing plays up. “If I, say, order a pizza and my hearing kicks up and I can’t understand what the man’s saying, I’ll turn on Emergency Chat, hand the phone to him, and a message will explain what’s going on with me. He can then type a message telling me the pizza will be ready in 15 minutes.”

A recent out-of-state trip to a rare syndrome conference threw up a raft of new problems. Vision difficulties meant Carla couldn’t find the right bus stop at night, or spot her brother who’d come to pick her up at the airport. She also discovered it was almost impossible to manage luggage while in her wheelchair. Even the hotel buffet presented problems.

“Being extremely independent, it annoyed me that people would have to help me get my food, but it’s hard to carry food using the wheelchair.

“But rather than sit here and go, well, that’s the way it is, I got on the phone.”

She arranged travel training through Massachusetts Association for the Blind and Visually Impaired on how to navigate unfamiliar parking lots, find elevators, and how to employ techniques to locate people when her vision goes.

“Every time life throws me a left curve, I just find my way around it,” she says.

She also called the local vocational school and convinced the engineering students there to spend time this year developing a wheelchair trolley that will allow her to carry her own luggage, and a foldable tray to help her carry her own food.

“Every time life throws me a left curve, I just find my way around it,” she says.

Carla’s life-long love of writing has sustained her throughout the years. She fell into journalism when a part-time role typing obituaries and news at her local paper segued into a full-time career one day when a reporter unexpectedly quit. “They handed me a notebook and pen and told me to start covering meetings.”

When Carla’s condition meant she was no longer able to keep pace with local news, reporting gave way to writing novels, nonfiction and screenplays from home.

Now, she writes full time, and has four novels under her belt. Her first book, based on the brutal murder of two local women in 1855, drew on her love of history and her experiences as reporter. The murder remains unsolved, but after the book was released and Carla appeared in the paper a woman contacted her with some new information based on a deathbed confession. The case continues to fascinate Carla and she’s planning to write a nonfiction account of the case – and maybe even crack the 161-year-old mystery.

Her Orwellian sci fi, set in a perfect world where everyone is the same and those with differences are deemed “others”, was inspired by raising three children on the autistic spectrum. One Mind explores themes of otherness – something she firmly believes should be celebrated.

It’s a message she tries to hammer home to her children.

[People with disabilities] are not broken, and they don’t need to be fixed.

“The attitude I’ve always had with the kids is this is part of you, it’s not who you are. It’ll only stop you if you let it stop you.”

While her mobility, vision and hearing quality vary wildly from day to day, one constant in Carla’s life is the support she’s received from her children and her husband of 30 years. “None of us wanted this, but because the kids have the syndrome also, we have our own support system. I live with my own support group. If one of us is having problems, the others are right there.

“Recently I had to get three teeth filled at the same time and next thing I know I’m getting all these memes – like silly dancing teeth – on my Facebook wall with messages saying ‘we hope you get better soon’. We all pull each other through.”

Carla credits the family’s “warped but incredible” sense of humor with keeping them together during tough times. Chuckling, she recounts a family trip to a restaurant a few years ago where a “patronizing and annoying” waitress called Carla “sweetie” and hovered over the family sympathetically, offering them vouchers for free ice cream.

“Afterwards my daughter laughed and said, ‘do you know what I just learned? Take the cripple to lunch, it’s cheaper’.”

Now that she’s in a wheelchair Carla’s condition is obvious. But before this she and her children encountered resistance to their conditions.

Carla’s drive to improve the world for people with special needs — and educate the don’t-get-its of this world — has turned outward from her family, towards the community and the wider state. She’s campaigning for a voluntary designation on driver’s licenses to identify the license holder as having an autism spectrum disorder. The move, she says, would improve interactions between police officers and drivers on the spectrum.

What seemed like a dead end was really just a sharp left.

She’s also working to improve transport options for vulnerable people in her area and she’s even waging a one-woman war against Dunkin Donuts over their disability access, documenting her months-long boycott on Twitter.

“Day 210: Honey on toast is still not a honey dip donut. Make the doors accessible for all!” reads a typical tweet. Dunkin haven’t replied to Carla – but she’s prepared to wait.

“Gandhi had his hunger strikes, King had his sit-down strikes – I’m on a Dunkin Donuts withdrawal strike,” she laughs.

But as with everything else, Carla has a plan. “I’ve got a YOLO [you only live once] attitude lately. Because you don’t know how bad things are going to get. So whatever looks like fun, I do.

“And even on my worst days, I’ve still got my writing. I’ve got my kids, I’ve got my advocacy work. I live a meaningful life.

“What seemed like a dead end was really just a sharp left.”

Carla Charter’s novels can be purchased on Amazon here.

Priti Salian
Do you know someone else who would enjoy this story?
How To Help A Loved One With Dementia

Tiny Tales On Her Fingertips
Don’t miss one more amazing story.
Every week, we’ll send a few of our favorite stories to inspire you.
Send this to a friend
Scroll to top