Exercise guru Drew Logan was in perfect health... until three sudden cardiac arrests nearly killed him. Now, with the help of his service dog Lucky, he's coming at life from a new angle.
sudden cardiac event 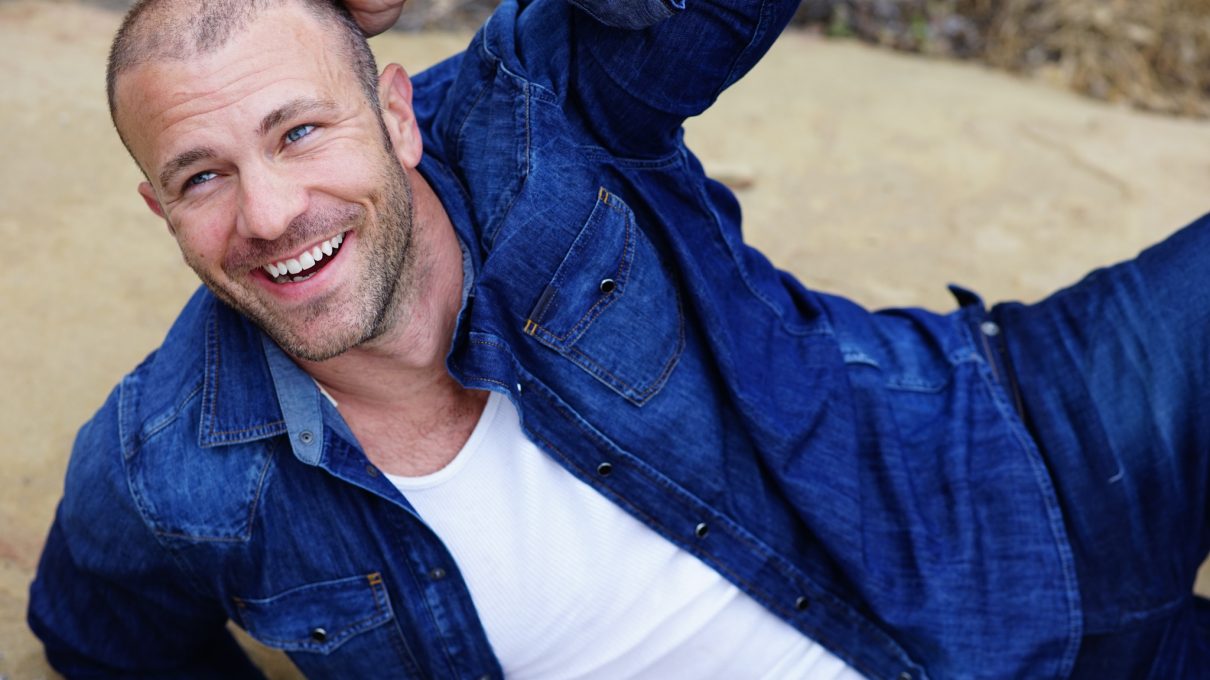 Drew Logan, 44, doesn’t remember the six minutes he was considered technically dead. He only knows the frightening stories he’s been told by the paramedics who resuscitated him en route to the hospital.

A celebrity personal trainer, who coached stars including Keith Urban and members of the country band, Florida Georgia Line, Logan also starred as a celebrity trainer and cast member on the NBC reality television show, Strong.

At the age of 30, Logan was the picture of health before he suffered three consecutive sudden cardiac arrests (SCAs) in October 2004. Unlike a heart attack that occurs when a blocked artery prevents oxygen-rich blood from reaching a section of the heart, SCAs are electrical rhythm malfunctions of the heart that cause it to stop completely.

Logan experienced his first two SCAs while at his then-girlfriend’s home in Nashville. He remembers feeling fine one moment, followed by a sharp pain in his head and his vision going dark. Although he regained consciousness about 30 seconds later, Logan still felt off balance. After briefly standing, he once again lost consciousness.

When paramedics found Logan, he was lying on the floor, his face was blue, and he hadn’t been breathing for six minutes. They restarted his heart and transported him to nearby Vanderbilt Hospital where he suffered a third SCA. He was defibrillated over 10 times before slipping into a coma.

Since only 10 percent of people survive SCAs, doctors weren’t optimistic about Logan’s chances of survival. Three days later, when Logan emerged from the coma, he found his doctors were mystified as to why a 30-year-old man who was the picture of health, with only 5 percent body fat, would experience three sudden cardiac arrests.

Doctors were mystified  why a 30-year-old man who was the picture of health, with only 5 percent body fat, would experience three sudden cardiac arrests.

“Doctors at the hospital performed numerous medical tests to try and determine why I had three SCAs,” Logan says. “They didn’t find any signs of coronary artery disease, an abnormality in my heart rhythm, or any other factors that could have caused an SCA. They finally presumed it was stress-related, since I had been working on a big business deal that ultimately fell through.”

Although baffled as to what may have caused Logan’s SCAs, doctors decided to try to prevent future attacks by implanting a defibrillator just under the skin on the left side of his chest. The device would shock his heart and keep him alive in the event that he had another SCA.

Doctors called Logan “a medical miracle”: someone who had experienced three SCAs in one night, and who not only survived the cardiac arrests, but also did so without sustaining any brain or heart damage.

“Doctors said I was in the five percent of patients who suffer an SCA without any signs of coronary artery disease or a heart abnormality,” Logan says. “They said the fact that I was in great shape was probably what saved my life.” 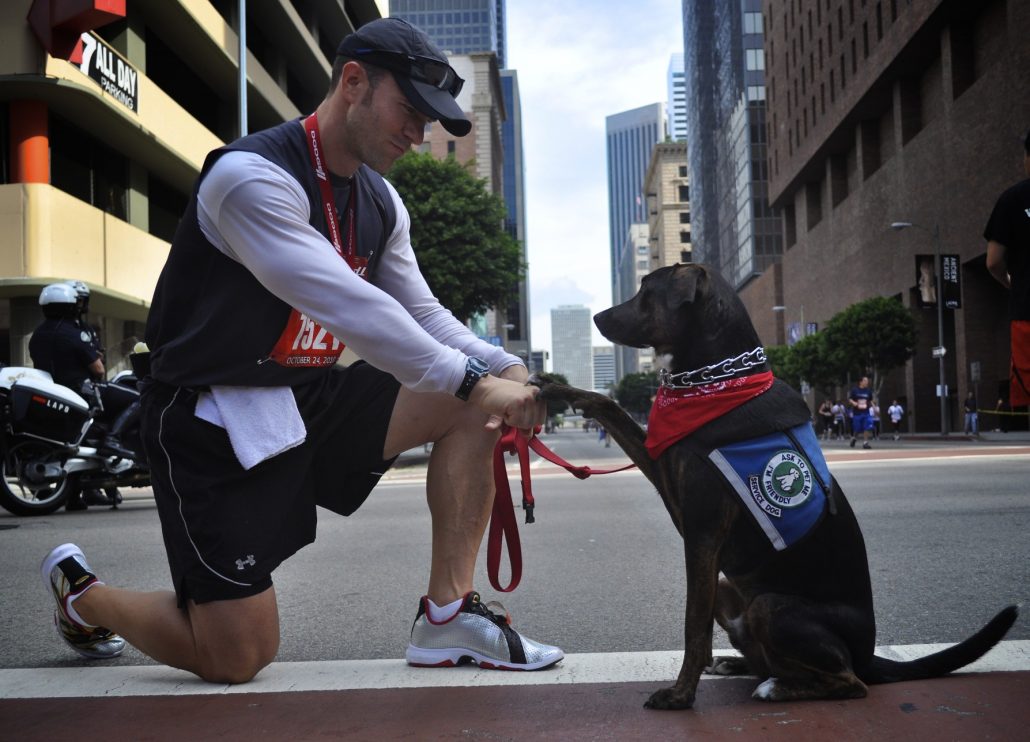 A Best Friend at His Side

Shortly after being discharged from the hospital, Logan saw a study on how dogs were being trained as cardiac alert service animals, and how they could detect sudden increases in their owner’s rising cortisol or blood pressure levels, alerting their owners to immediately sit down.

“I’ve always had dogs and I thought a cardiac alert dog would offer an extra sense of security,” Logan says. “If my defibrillator goes off, it feels as though I’ve been kicked by a racehorse, and if I’m in a crowded gym or an airport when that happens, I could accidentally hurt myself or others.”

Logan found Lucky, a black Plott hound, in 2006, at a high-kill Nashville animal shelter when the dog was eight weeks old. One look at the pup’s soulful brown eyes, and Logan knew he had found not only a service dog, but a new best friend.

If my defibrillator goes off, it feels as though I’ve been kicked by a racehorse.

Logan adopted Lucky and when he was a year old had him undergo training to be a cardiac service dog. Lucky quickly caught on how to use his keen sense of smell to detect changes in rising cortisol levels, which indicate stress, and to alert Logan that he needed to sit down and relax for a few minutes.

Today, Lucky remains by Logan’s side at all times even traveling with him extensively. When they’re not on the road, they often join Logan’s other two dogs for walks on the beach near their Manhattan Beach, California home.

When Logan returned to his work as a personal trainer in January 2005, he learned he hadn’t escaped his health crisis completely unscathed. Whereas before he had no problem designing and remembering complex diet and fitness programs for his clients, he found the SCAs had left him with short-term memory problems.

“I knew I needed to come up with a diet and fitness plan that was easy, not just for my clients, but also for me,” Logan says.

He started by giving his clients a list of daily goals to meet, and asking them to score themselves out of 100 on how well they followed his instructions for eating regular meals, snacks and completing workouts. His clients reported great success, and Logan later learned that his new plan wasn’t as simple as he thought.

“I discovered the process is called neurological patterning and that it’s possible to rewrite unhealthy habits and create healthier ones with diet, exercise and a reward system,” Logan says.

He named his plan, “25 Days” based on the concept that it takes 25 days to neurologically build positive habits. Last September, he published his book, 25 Days: A Proven Program to Rewire Your Brain, Stop Weight Gain, and Finally Crush the Habits You Hate Forever. (Gallery Books, September 2017).

Today, Logan is developing a meal delivery plan based on his 25 Days plan, and is also working on another television project. Yet no matter how busy he is, he says the events of October 2004 served as a wake-up call.

“I’m acutely aware of the limited time we have we have to live our lives,” Logan says. “And as a result, I don’t tolerate nonsense anymore and I feel lucky to be alive.”

Stacey Knott
Useful Resources
Do you know someone else who would enjoy this story?
Community Roundup: How Often Do You Think About A Cure?

How iPods, iTunes And Spotify Can Help Treat Dementia
Don’t miss one more amazing story.
Every week, we’ll send a few of our favorite stories to inspire you.
Send this to a friend
Scroll to top