When Lexi Vernon was born, she couldn't hear the songs her mother sang her. Now, along with the power of music, her story is helping fight hearing impairment across the country.
deafness 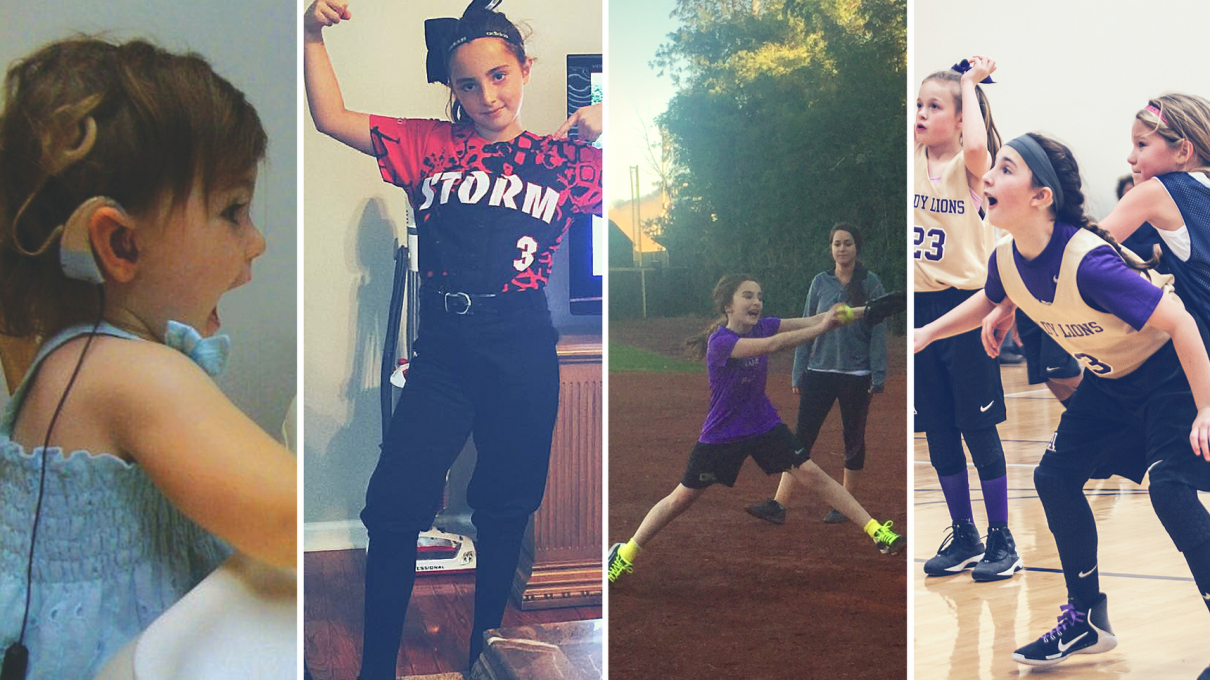 In Jaime Vernon’s mind, motherhood is linked with music.

Many years ago, her own mother used to blast oldies and gospel music as she waxed the linoleum floor in their house in rural Ohio. Cornstalks surrounded their home. Neighbors down the road owned a chicken farm. Vernon and her mom, who sang in the church choir, slipped on socks and sang along as they slid and danced across their kitchen. “It’s one of my best memories,” Vernon says. “Music was always in our home.” 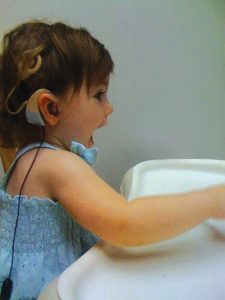 Lexi Vernon, having her cochlear implants activated for the firsttime.

Years later, Vernon was living in Nashville when she brought her newborn daughter Lexi home from the hospital: it was a year after her own mother had died of breast cancer, and Vernon was eager to sing her baby daughter the tunes and lullabies that had once been sung to her, and instilled in her a love of music. Each night in the nursery, Vernon sang to Lexi, but the baby cried incessantly, writhing on her shoulder. When Vernon tried to rock her to sleep, Lexi protested even more.

“I thought we just weren’t connecting,” she remembers. “Never in a million years did I think I had a deaf child.”

Vernon didn’t learn Lexi was profoundly deaf until after her first birthday. Six months before her second birthday, Lexi had cochlear implants in both ears. Experts say children implanted before age two have a good chance of hearing—and speaking—like other children. Lexi, now 9, speaks and talks. But she almost fell through the cracks.

Vernon wanted to make sure other parents and kids didn’t find themselves in the same situation. So, six years ago, she started the non-profit Songs for Sound.

Vernon began by recruiting top Nashville songwriters like Neil Thrasher, Wendell Mobley, Jason Sellers, and Jay Clementi to travel with her across the country to tell the intimate story behind their songs. These events ultimately raised over $200,000 for underfunded hearing programs. Now, her mobile health outreach program has provided over 12,500 free hearing screenings to children, seniors and veterans. She also runs a free weekend camp in Kentucky for deaf children and their families. Her brother-in-law, Rascal Flatt’s lead singer Gary LeVox, has helped with the non-profit, performing for veterans.

“I felt disconnected from Lexi for a long time,” Vernon says. “Then, after her implants, at about 21 months, I was rocking her and waiting for her head to go on my shoulder. It did, and time stopped. I knew then that I needed to do something to help others.”

Vernon is vocal about Lexi’s story. She shares it with parents and educators across the country, but also with doctors. That’s where Vernon’s story started: in the doctor’s office. 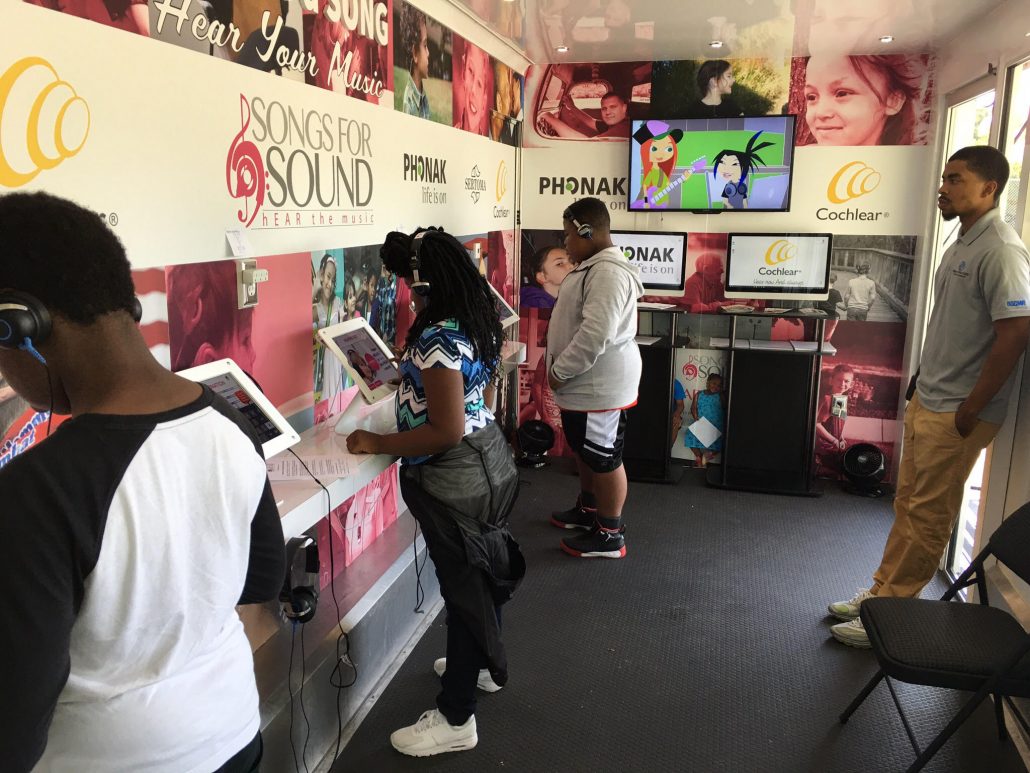 Songs for Sound travels the country, raising money and awareness around hearing issues by telling the stories behind the music.

At a routine 10-week check-up, Lexi’s pediatrician noticed from her chart she never had the standard hearing test all babies get at birth. Vernon remembered they skipped Lexi that day; they were busy. In his office, the pediatrician couldn’t get the test device into Lexi’s tiny ear canal. He told Vernon not to worry, they’d do it when she was closer to a year old.

At 10 months, Lexi wasn’t responding to doors slamming or dogs barking. One day, Vernon’s husband, Kevin, brought her into Lexi’s room. Lexi had her back to them; she was looking out the window. “Kevin said, ‘watch,’ and he clapped his hands, hard. Lexi didn’t move.” She also wasn’t trying to mimic speech. The pediatrician said it was normal, Vernon says, that some kids don’t talk until 18 months. But Vernon knew something was wrong. She pushed for a referral, and got one.

In the audiologist’s office, she expected to hear Lexi had a fluid build-up in her ears. “I thought it was something that was fixable,” she says. “The moment I found out she was deaf, that was five seconds of complete darkness for me.”

One of Vernon’s biggest messages for parents: when it comes to your children’s’ health, follow up until you get an answer you’re satisfied with. Without trusting her gut, she says, Lexi may not have been diagnosed until it was too late to achieve near-normal hearing with implants. “There’s nothing more reliable than a parents’ intuition,” Vernon says. “You’re your kids’ only advocate in this world.”

Since she started the mobile clinic two years ago, Vernon has tested over 24,000 ears in 25 states. Her goal is to expand to all 50 states. She connects those who need hearing help with a local audiologist, and follows up to make sure they get the care they need. She’s also hoping to start a new project that would bring awareness to doctor’s offices, YMCAs and schools. 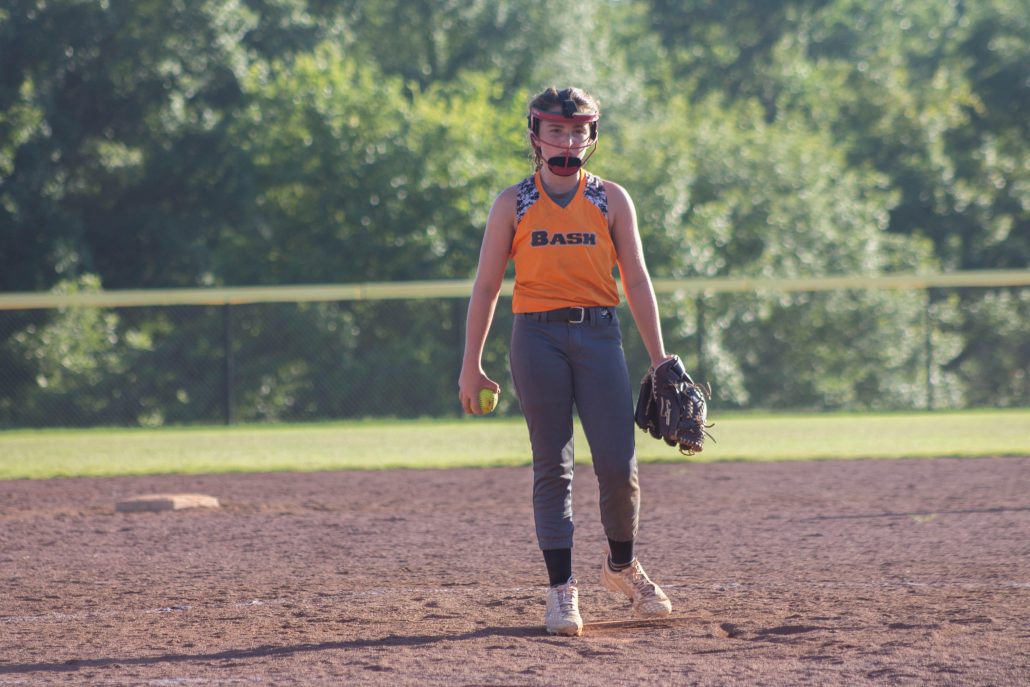 It was a Friday when doctors turned on the implant in Lexi’s right ear, a month after her surgery. The following Monday in the audiologist’s office, they turned on the left implant. “Lexi sat back in her chair, took really deep breaths, and just took in sounds,” Vernon says.

Later, at home, Vernon turned on the radio. She sang. She cried. “Lexi loved the music immediately,” she says. A month later, Lexi said her first words. “It was ‘mum, mum mum,’ meaning mom,” Vernon says. “At 20 months of age, finally.”

Soon, Lexi identified Baby by Justin Bieber as her favorite song. She learned every word, and it wasn’t long after that she was walking around the house belting it out for all to hear.

“Our lives are soundtracks,” Vernon says. “I remember the song I warmed up to during high school volleyball, my wedding song. Music inspires, it’s a gift. Lexi almost missed out on that.”

GERD and the Midnight Gurgle
Don’t miss one more amazing story.
Every week, we’ll send a few of our favorite stories to inspire you.
Send this to a friend
Scroll to top